No Country for Old Miners

Pete, they called him. Sometimes Paydirt Pete, sometimes just Pete. He'd been here before in double-aught when the team had its hopes bolstered by an early lead only to be dashed in the second half by the one they called Toombs. He was unstoppable. Folks said he could score from the five if you gave it to him three times. Folks said a lot of things. Sometimes they were right.

Share All sharing options for: No Country for Old Miners

He sits atop the high and windy reaches of the barren concrete as the sun is breaking, the gentle East Texas wind ruffling his grizzled beard, his battered prospecting hat worn to a dull orange sheen by countless hours in the West Texas sun. Just one state but it seems a world away. 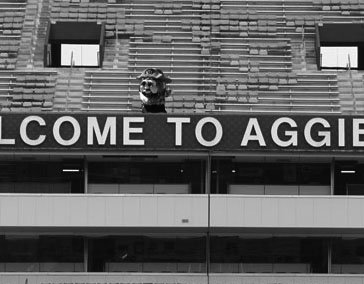 Saturday night they'd play again but he wouldn't be on the sideline. A more youthful and modern icon was selected and so he was finished and now just hovers on the periphery, sometimes catching a stolen glance from his predecessor or the team or whichever coach is now in charge but never any thanks or even a glimmer of recognition.

He used to command a certain amount of respect. A small-time prospecter turned enterprising oilman turned eager real estate agent turned mascot. The slow decline of the early '80s oil bust when the bustling highways with their endless convoys of tankers and buses transporting shipments of crude and workers dwindled down to empty stretches of asphalt fronting huge lots full of rusting drillpipe and machinery and tattered corrugated buildings with paint-peeled signs and disconnected phone numbers. He had been in the ground once; had known how to find things. Now his nose was bulbous and grotesque; overshadowed by bushy gray eyebrows and a pair of sadly inquisitive bright child's eyes.

And now he's back here. The flat rolling blackland of the Brazos Valley, the bats swooping about his widebrimmed hat one more time before they fly in to roost. Who will tame them? Who will tame him? No one, he thinks. And then there is a clatter on the concrete below. A familiar figure is ascending the bleachers and it is the one that he has always feared and yet never really expected. He thought to hide behind the crates being unpacked on the field below but it was too late and he suddenly knew that all those years of exile had led directly to this.

Call it, says the man.

What's the best thing you ever found prospecting?

What was it? What do you want out of life?

I suppose I just want to live in peace without distraction.

Then I suggest you get out of here. Right now. 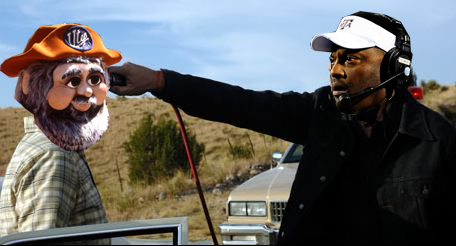