See how the Auburn Tigers stack up against Texas A&M’s Fightin’ Texas Aggies in this week's Foundation of Facts...

Share All sharing options for: 2012 Foundation of Facts - Game 8: Texas A&M vs Auburn

Texas A&M got off to a great start versus LSU, but costly turnovers and late in the 1st half, and a few missed opportunities on Special Teams by A&M allowed LSU to eke out a victory at Kyle Field last Saturday. This week we will look at how the Auburn Tigers stack up against the Aggies. Auburn has only won one (1) game this year, in overtime, versus Louisiana Monroe (21st Off, 44th Def); surprisingly, this is the team on Auburn’s schedule, so far, that most resembles the Aggies. Both the Warhawks and the Aggies have top 25 offenses and middle-of-the-pack defenses.

1. Texas A&M’s entire Offense is #1 in the SEC in rushing, total offense, scoring offense, plays per game, pass plays per game, average per rush, 1st downs, and 3rd down efficiency; even after playing LSU’s #2 ranked defense last week (which is now ranked #3).

2. Auburn leads the SEC in one category: Kickoff Return Coverage. Auburn is ranked 100th or worse on 17 of 22 of the categories listed below for offense, and 11th or worse in the SEC on 21 of 22 categories for offense. 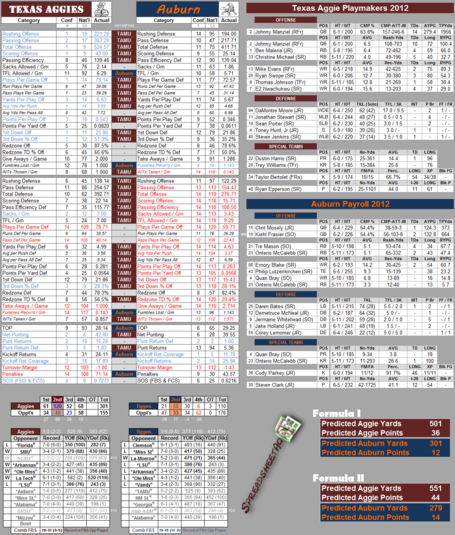 1. I expect A&M to get some sacks, to stop Auburn on 3rd down pretty regularly, and to be able to slow their sputtering run game.

2. A&M may be 11th in the SEC in total pass defense yards at 255 per game, but we are 7th in average yards per pass allowed at 6.34 (35th in the nation); i.e. teams have gotten behind on us and had to pass A LOT, which raises the total pass defense but that doesn’t mean we are bad, just victims of the other team’s strategy.

3. When was the last time a defensive end led a team in tackles through 7 games? DeMontre Moore is a beast! (62 total tackles, 42 solo)

5. In Auburn’s 4th quarters; they have scored 6 points while giving up 62 points to their opponents, collectively. If for some reason the Ags get behind or the game is close in the 3rd; the Ags have a great chance to still win the game on the road. Don’t close the door on these Ags against this Auburn team even if it looks bad going into the 4th quarter.

6. The Aggies turnover margin is bad at -1.00, but Auburn’s is worse at -1.43. Auburn has only intercepted one ball this year, and the Aggies have only recovered one opponent fumble. Yuck.

I hope you enjoy this feature and will come back next week to see how the Aggies will fare, statistically, against the Missississississippippi State Bulldogs (another bulldog mascot?) in Game 9.

LOOK AHEAD: Mississippi State is 7-0 and 3-0 in the SEC. They have the 50th ranked offense at 417 yards per game, and the 25th ranked defense at 328 yards per game allowed. However, they face a tough 3-game stretch coming up AT Alabama, HOME for Texas A&M, and AT LSU. This "State" team could be 7-3 when it comes time to play Arkansas.