The Georgia Lady Bulldogs came early to College Station to avoid the winter storm that hit their home. For the first 20 minutes the Aggie Women's Bouncy Ball team were generous hosts to our weather refugees. But A&M overcame the biggest deficit more than a decade to escape with a 78-73 overtime win.

All week, Coach Blair has been talking about how his team couldn't take Georgia lightly despite 3 lopsided wins the only times the teams have played. He talked about how the team we beat last year in Athens went to the Elite 8. He talked about how Andy Landers is a Hall of Fame coach. He talked about how good some of their players are and how much better they've played since the first meeting. But Courtney Williams admitted that the message didn't stick

We came out expecting to beat them. Every time A&M has played Georgia the past three times we blew them out, and the last two times were at their house and we took them for granted. - Courtney William in the postgame

The Ags came out flat. It took A&M three shots to take an early 2-0 lead. Georgia answered with an 11-0 run that took almost 9 minutes to build. The Ags second basket was followed by an 8-0 scoring drought to make it 19-4. Georgia was playing a packed in zone, but it looked to me like a mix of a 1-1-3 and a 2-3. The Ags missed jump shots badly, and when they were able to get the ball in the post where Karla had a size advantage, she would get triple teamed. Coach Blair tried going with Rachel at the post. He tried Curtyce at PG. He tried going small with Achiri as the post. It took the Ags until 5:31 in the first half to score their 10th point. At 3:10, Georgia got their largest lead at 27-11. During the first 17 minutes or so, interspersed among the badly missed jumpers, the Ags would make a move for an open layup. You could feel the crowd getting ready to cheer what would be the icebreaker that started a run. But then the shot wouldn't go down and you could feel the frustration for both the team and the fans.

27 points is not terrible defense, but the Dawgs were getting too many layups. Coach Blair switched to a 2-3 zone at the end of the half and held the Georgia offense to just two free throws over the last 3:10. The Ags didn't exactly go on a run, but a pair of FTs by Karla and a pair of jumpers by Courtney Walker cut the halftime deficit to 12.

The Ags had needed that burst to bring their halftime total to all of 17 points. This was the worst scoring half of the season, with the next lows being the first half vs Tennessee (20) and the first half vs Texas (21), both blowout losses. The good news is that 12 points down looked surmountable… and it was.

The Ags stayed in the 2-3 zone in the second half and got stops on Georgia's first two possessions. "Get it inside to Karla" was one of the halftime messages, along with "Don't let them play harder than you on your home court", and other things we can only imagine. Karla cut the lead to 10 on the Ags first bucket of the second half. After Tiarra Griffin's three pointer stretched the lead back to 12, Karla cut it to 10 again, getting a feed from Courtney Walker on the left block and laying it in … that's the play in the photo for this post. A&M cut it to 7 at 35-28 before Georgia called timeout at 12:34 to go. Another layup by Karla cut it to 5. Then Jordan Jones stepped it up even more. You could see her sizing up Georgia's backup PG, Marjorie Butler before she stole the ball as Butler was crossing midcourt. JJ was fouled on the fast break and made 1 of 2. But Achiri grabbed the rebound and put it back in, making it an unusual 3 point play and cutting the lead to 2. Walker stole the ball on the next possession and got the fast break to tie the game. After another stop, JJ hit a 3 to give the Ags the lead.

It's pretty common for teams to run out of gas after working hard to overcome a large deficit. I was worried that this would happen when Georgia responded by tying the game on the next possession, as Griffin hit her second trey to tie it back up. She then stole the ball and got a fast break to regain the lead for the Dawgs. The CW network was starting to click and the Ags scored on 5 out of seven possessions before the 4:54 TV timeout (it was on TV??). But the Ags weren't getting stops and both Griffin and Khaalida Miller hit 3 pointers in that stretch, matched by one trey from Tori Scott. The net result was the Ags were down 6 at the timeout.

The lead fluctuated, but it was still 6 when hit a jumper with just 1:26 left. At this point, both teams had players in foul trouble. Walker and Gilbert were playing with 4 fouls. Hempe had 4 for the Dawgs. Coming out of the timeout, Tori Scott took a 3 pointer that missed, but Walker came away with the rebound, getting Hempe to foul out. 2 FTs cut it to 4. Miller turned it over, and Georgia called a timeout. Coming out of the huddle the Ags ran a beautiful inbounds play as JJ lobbed a pass over Karla in the lane to Walker who caught it while jumping and put the ball through the net to cut it to 2. The Ags had been pressing the inbounds starting late in the first half, and JJ's pressure was getting to Georgia's guards. As Jordan started to set herself to pressure the ball coming upcourt, Miller mishandled the inbounds pass and ended up kicking it back over the endline. Aggies ball! Timeout Georgia. On the ensuing play, Jones drove the right side and threw up a contested layup 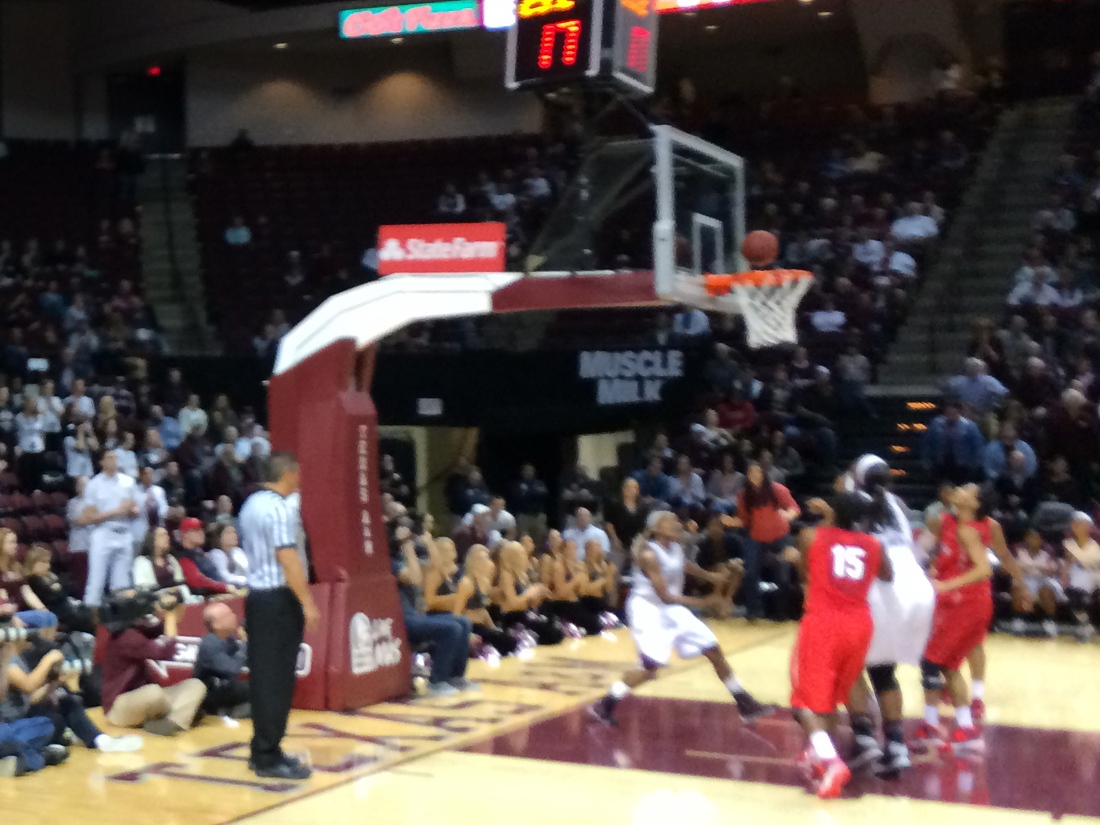 This fuzzy pic is the ball bouncing on the rim before falling through. JJ is falling across the end line after taking the shot.

Tie game at 62. 25 seconds left. Georgia got a shot off and grabbed the offensive board. The Ags forced the Dawgs to pass the ball out and Tori Scott got another steal. After a timeout, Courtney Williams' shot to win it in regulation just missed. On to overtime.

Karla won the tip and the Ags took an early lead in OT. A&M led until Erika Ford hit a 3-pointer to give the Dawgs a 69-68 lead. Walker got the Ags to 70 first on the next possession. Tori got another steal and fast break layup to make it a 3 point lead. Shacobia Barbee tied it again on an "and one" play that fouled out Walker (CWalk was the third player to foul out after Hempe and Washington for Georgia). Williams got the lead back with 35 seconds to go. At this point I was talking to the friend next to me about an ESPN 30 for 30 on the NC State MBB Championship run that ended with their win over Phi Slamma Jamma. At one point in that tourney run, Valvano had his team intentionally foul when they were ahead in order to get the last shot. Blair didn't do that, but when Ade fouled Barbee with 28 seconds to go, we were thinking that this was not so bad. If she hit both, the Ags would still have plenty of time to win it. As it happened, Barbee hit the first and missed the second. Georgia had to foul Jones, who hit both to make it a 3 point lead. Griffin missed a 3 and Curtyce Knox grabbed the rebound and was fouled by Barbee, who became the 4th player to foul out. It was a hard foul (described by someone as a sack) and Curtyce missed both. But Tori got the rebound on the second miss and was fouled. She hit both for the final margin. Georgia threw away the inbounds pass and the clock ran out.

Courtney Walker led the Ags with 25 points for her second 20+ scoring game in a row. CWalk was 10-18 from the floor, which means she was 10-14 after missing her first 4 in the awful first half. Walker added 3 rebounds and 3 steals against only 1 turnover. Courtney Williams had 13 points. Karla had 12 with 6 boards and 2 blocks. Jones had an outstanding night that is not fully reflected in the scoreboard. Her 11 points were welcome, along with her 6 assists against 2 turnover. But although she was only credited with 2 steals, her D rattled the Georgia guards. Achiri was the only starter not in double digits, but her 6 points came on 3-4 shooting and she led the Ags in rebounding with 8. Tori Scott had 11 points and 2 steals in 19 minutes off the bench. Tori has been playing very well this year.

Merritt Hempe led Georgia with 19 points and was one board shy of a double double. Tiara Griffin had 13 and Krista Donald had 10 points.

The win keeps Andy Landers winless vs A&M and keeps the Ags tied with Tennessee for second place in the SEC, a game behind S. Carolina. The Lady Vols and the Lady Gamecocks were off on Thursday. On Sunday, Carolina goes to LSU, assuming the weather lets them travel by then. Tennessee hosts Kentucky.

The Aggie Women's Bouncy Ballers hit the road for games against Bama and Ole Miss. Sunday's game in Tuscaloosa will be a rematch of the Jan 5 game that was closer than the 73-58 final would suggest. The Ags only outscored the Tide by 5 in the second half after leading by 10 at halftime. Halfway through the second half, Bama had the lead down to 3 before A&M pulled away. Since then the Tide have pulled some upsets, beating Kentucky and Georgia. The Ags need to stay focused. Daisha Simmons and Shafonte Myers will test our work on defending scoring guards. Simmons put up 20 on us in January. Bama is coming of a road loss to Arkansas on Thursday.

The Bama game is listed as being Sunday at Noon on FSN and WatchESPN.