The Kyle Field Weather Delay: Lots of Room for Improvement

During a two-hour lightning delay in Texas A&M's home opener vs. Lamar University, the stadium staff may have violated NCAA rules regarding fan re-entry into the stadium. There was also virtually no information given to fans during the delay.

Share All sharing options for: The Kyle Field Weather Delay: Lots of Room for Improvement

Kyle Field had a number of technical issues last night, but the information blackout was the worst of them. Kyle Field staff wasn't providing any updates, and cell phone service was virtually nonexistent on AT&T's network. I can only recall hearing updates that we were in a weather delay, with no thorough explanation of exactly what the rules were. Kyle Field may boast college football's largest screen, but it took them 1.5 hours to use it to display a weather map, which even then was a joke as it almost scaled from Austin to Louisiana: 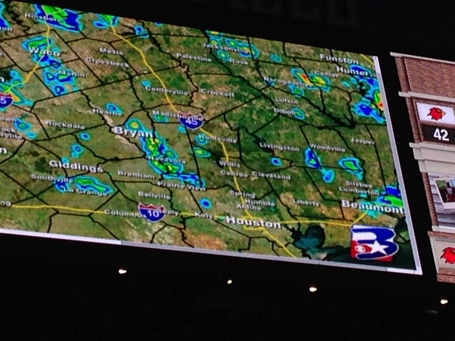 After a 450 million dollar renovation, Kyle Field's grand unveiling for Texas A&M's home opener was delayed for two-hours and 5 minutes due to detected lighting strikes within the area. Fans and I trying to leave the game were told that we would not be allowed re-entry into the stadium, as it would violate their policy and SEC rules. In the process of doing so, Kyle Field's staff was not only ignoring common sense, but according to Garrett Lewis of KFSM in Fayetteville, they may also have been violating NCAA rules:

I couldn't locate the specific NCAA rule stating this, and a request for clarification was not immediately returned, but a review of other SEC member websites leads me to believe this is correct.

The Southeastern Conference mandates that once admitted to the stadium, no ticket holder shall be permitted to leave and re-enter the facility on that ticket. In the event of inclement weather, home-team game management reserves the right to waive this policy.

In the event of inclement weather (i.e. dangerous winds, tornado, electrical storm, etc.) all guests will be advised that it is in their best interest to seek shelter. Emergency instructions will be delivered via the public address system and the message boards when possible.

In the event that inclement weather approaches Williams-Brice Stadium, public announcements will be made to update fans on the situation. Should a lightning strike occur within 8 miles of the stadium, play will be stopped immediately. Play will resume thirty minutes after the last strike to occur within the 8-mile threat radius. Fans are encouraged to exit the venue and seek shelter in their vehicles during weather delays. All ticket stubs should be kept for re-entry into the stadium after the weather threat has cleared. Updates may also be communicated via radio on 107.5 The Game, Gamecocksonline.com, Twitter, and Facebook.

The Florida Gators ran into similar issues last week in their game against Idaho before the game was eventually called off. According to GBH's own Justin Kaspar (@ranger222), current graduate student at Flordia, fans were allowed to leave and re-enter during the 3-hour weather delay.

During an inclement weather event involving lightning, the NCAA lightning safety guide recommends that member institutions do the following:

Ensure a safe and orderly evacuation from the venue with announcements, signage, safety information in programs and entrances that can also serve as mass exits. Planning should account for the time it takes to move the teams and spectators to their designated safer locations.

No announcements were made regarding an evacuation, no safety information was given, and Texas A&M's administration and staff ended up forcing fans to make uninformed decisions between their safety and their football. I don't know what the designated safer location is for Kyle Field, but during lightning, I know that my car is a much safer place for me to be than a few hundred feet up on the 3rd deck. Four-hundred and fifty million dollars bought a beautiful stadium, but unfortunately it didn't come with much common sense last night.