Texas A&M opened up SEC West play against Arkansas in a very traditional Texas A&M way: Scoring on it's opening drive. The drive was perfectly scripted, and after just 4 plays taking 1:05 off the clock, A&M capped off a 49-yard drive with a Brandon Williams TD.

The excitement of the opening TD quickly faded however, as Arkansas punched A&M right back with a touchdown of their own. Although the drive ended with a 9-yard TD run from Jonathan Williams, the effectiveness of the Arkansas passing game is what took everyone by surprise.

The remainder of the first quarter was a slug fest with A&M's drives marred by inaccurate passes and dropped balls. In the second, Arkansas was the first team to finally break through with a 50-yard TD from Alex Collins, and the situation felt bleak. It was 14-7 Arkansas until Edward Pope caught an 8-yard TD from Kenny Hill with a circus catch.

Unfortunately, A&M couldn't make it to halftime to make adjustments with the game tied. In a very Bielema like fashion, his team faked a punt and had a mob of players available to escort Sam Irwin-Hill on his 51-yard TD run.

Arkansas furthered their lead in the 3rd quarter on a 44-yard TD pass from Brandon Allen to AJ Derby, and it wasn't until the 4th quarter that A&M finally found it's footing. First, A&M caught Arkansas flat-footed with an 86-yard TD from Kenny Hill to Edward Pope:

Late in the fourth, A&M was again the beneficiary of a falling Arkansas defender on this 59-yard dime from Kenny Hill to Josh Reynolds:

The game ended in regulation at 28-28, and Arkansas, winning the overtime coin toss, opted to open up on defense. It only took one play for A&M to move the entire 25-yard overtime length of the field, as Malcome Kennedy slipped behind the Arkansas defense and found himself completely open for a pass from Kenny Hill:

Arkansas offense took the field, needing a touchdown to tie the game up for a shot to win it in a 2nd OT. The Aggie defense held tough, completely shutting down Jonathan Williams on back to back plays with a net gain of 1-yard. On 3rd and 9, the Aggies gave up an 8-yard out to AJ Derby, teeing up a 4th and 1 that Arkansas had to convert.

With an offensive line averaging 328.4 lbs, and a running back corps that looks like one of the best in the country, it felt like a 4th and 1 conversion was all but a given. The Aggie defense broke into the backfield however, and won the game for A&M with a monstrous stop:

A&M Defensive Line Coach Terry Price summed up the feelings of both players and fans after the game:

All hail the magical powers of the Aggie Rally Baby: 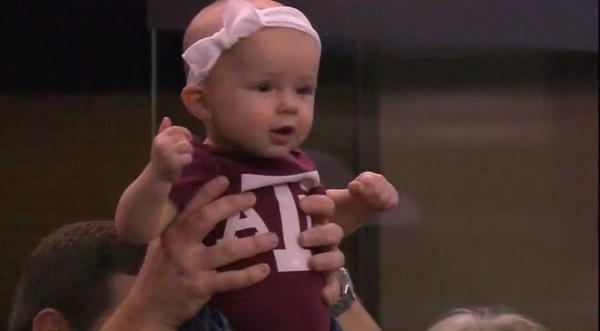