We asked Google Maps about college football and found the app easily qualified to work for ESPN.

With nothing better to do as I drove west to east along I-10 today, I decided to search Google Maps for the Texas A&M recruiting slogan WRTS (We Run This State) to see where it landed. It found the right place, pinpointing the Texas A&M University main campus. cuppycup and I decided to find out what else Google Maps knows about college football. 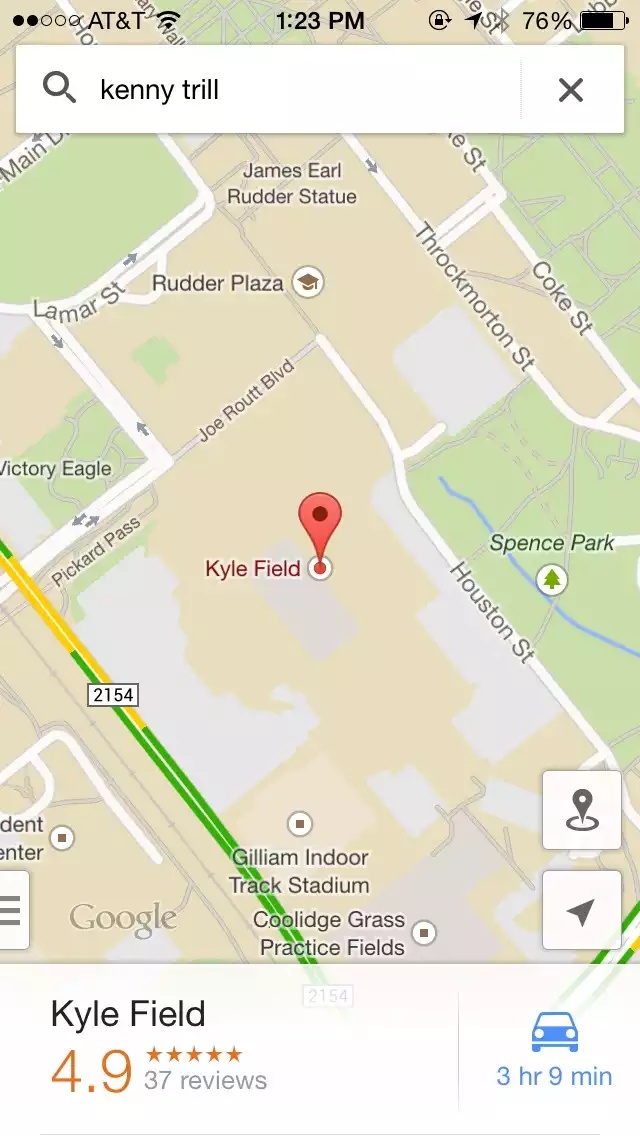 Landed right where it should. We are the Aggies, the Aggies are we. Trill to each other, as Aggies should be. (H/T BeveledAg on Texags) 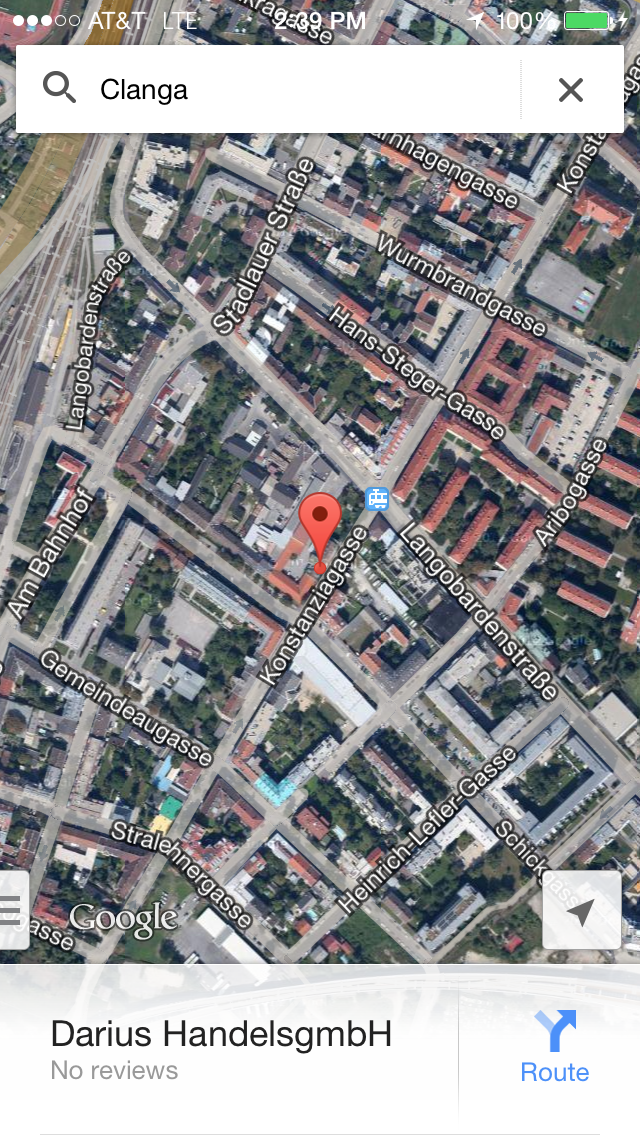 Google Maps doesn't feel that Clanga is the right word to describe a cowbell sound, so it takes us to this poorly named computer store in Vienna to find the right way to verbally express audible pain. 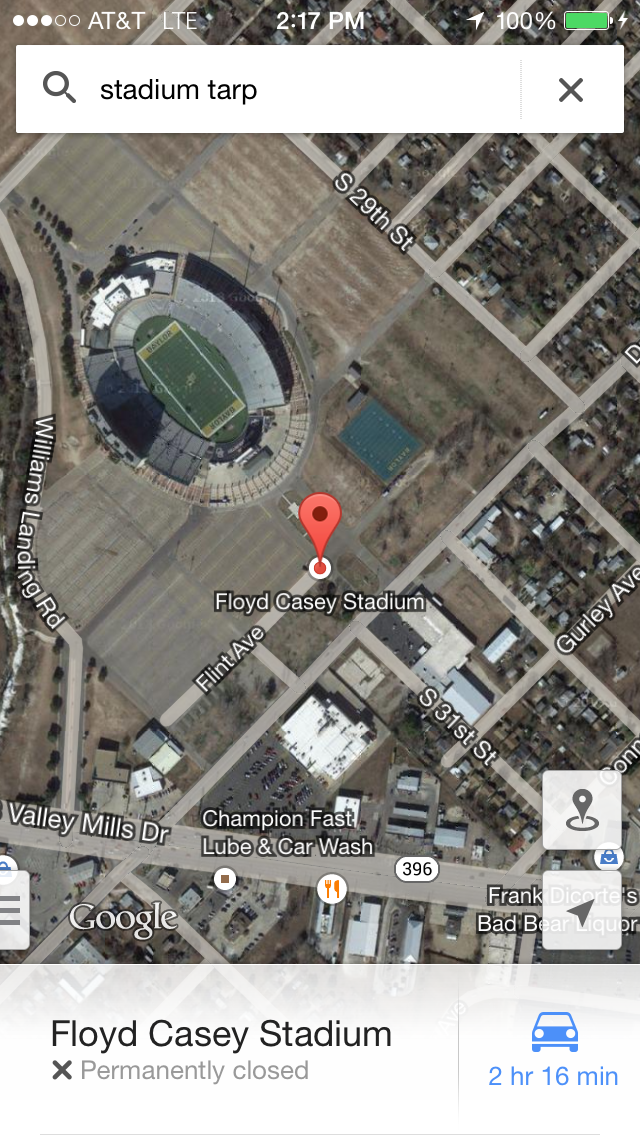 Google knows Floyd Casey is closed, and Google don't care. There isn't a tarp in the world that's big enough to hide your past from Google. 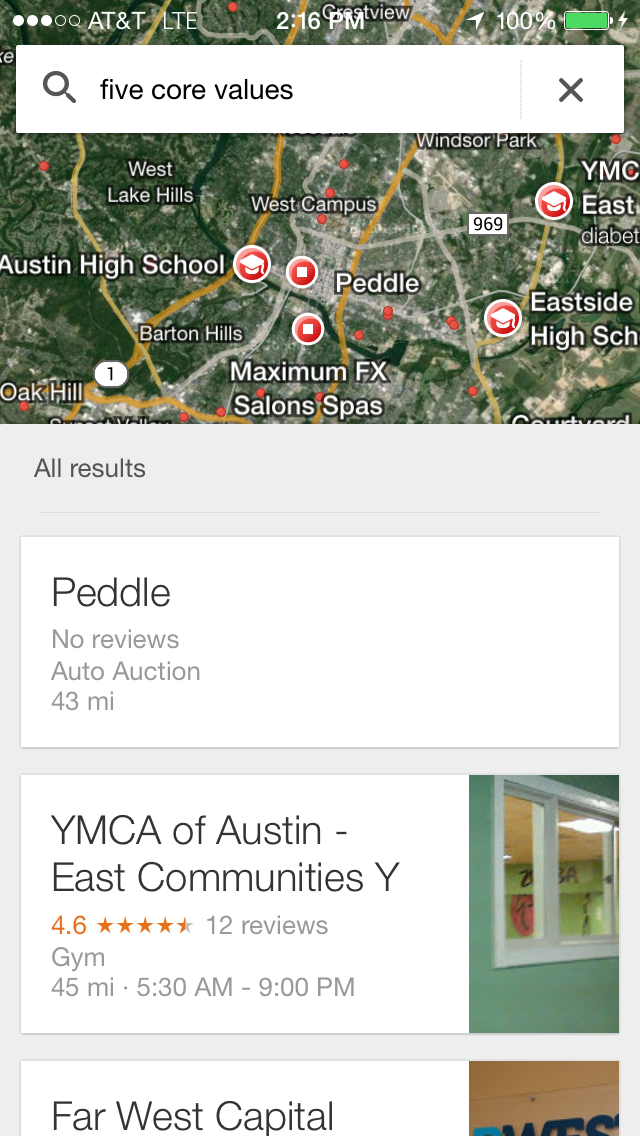 This isn't that surprising. Anyone who constantly needs to tell you that "we hold ourselves to a higher standard" is likely no more than a used car dealer. 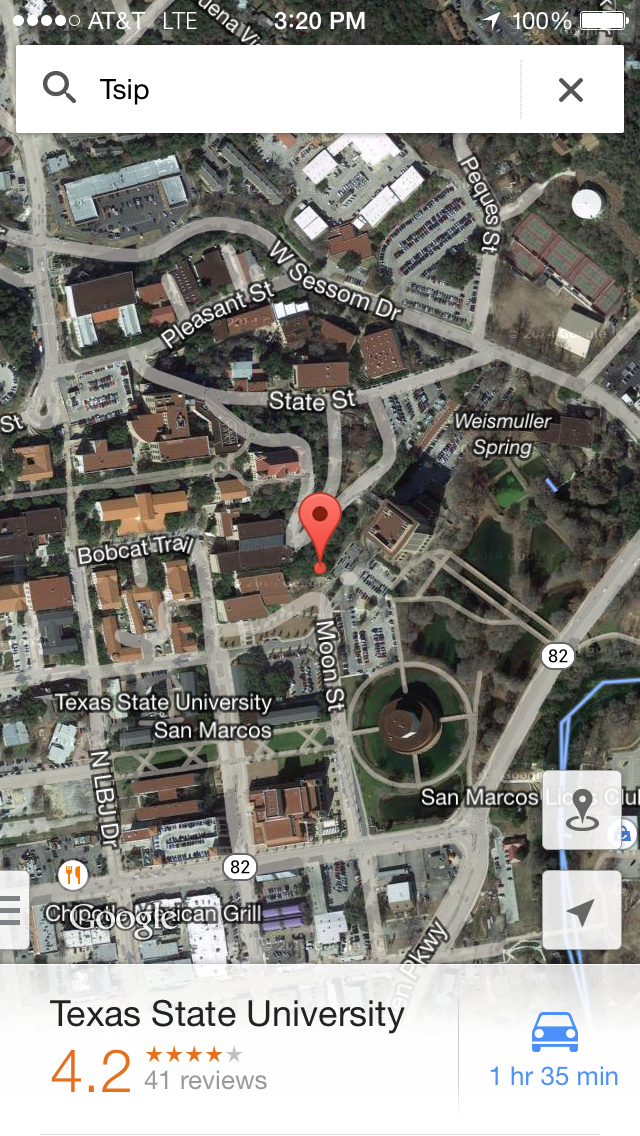 I could see why Google would think this. Most Texas State fans assume the identity of Longhorn fans after graduation, and help fuel the results of this search: 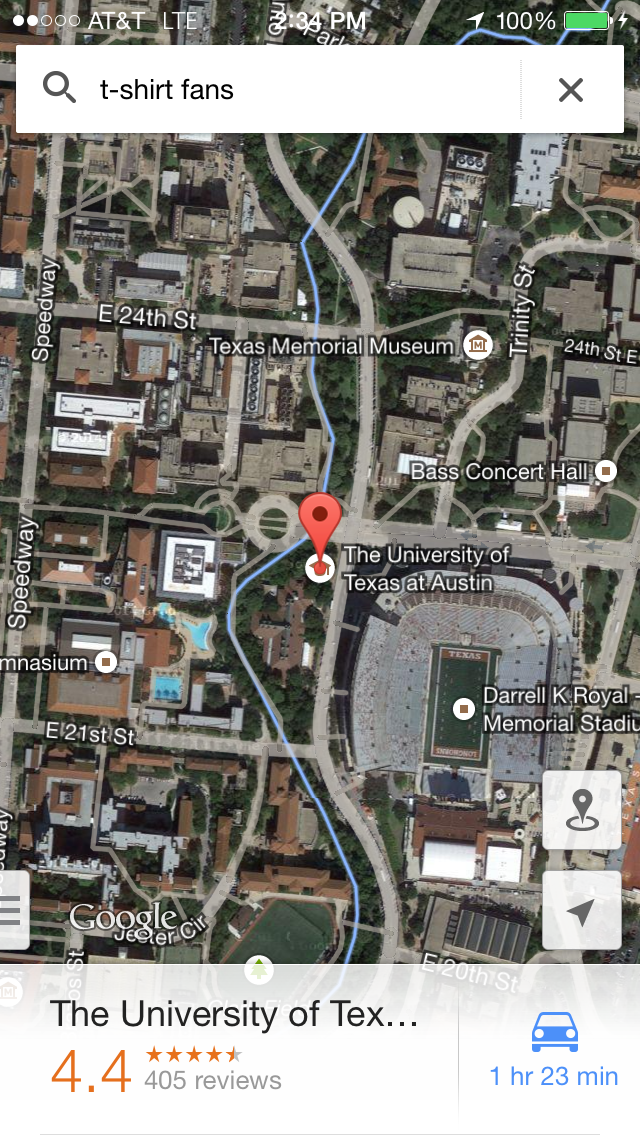 Unique term results are neat, but the real power was found in Google's ability to answer common CFB questions. 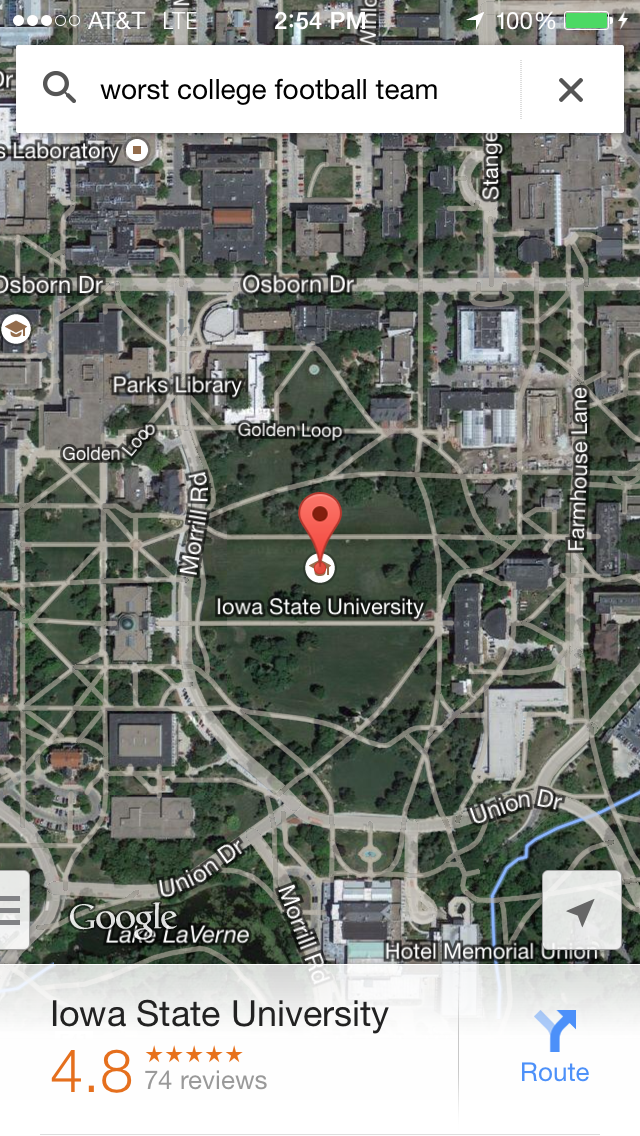 I hope the CFB Playoff committee will take Google Maps' opinion into account when judging Baylor's strength of schedule at the end of the year. 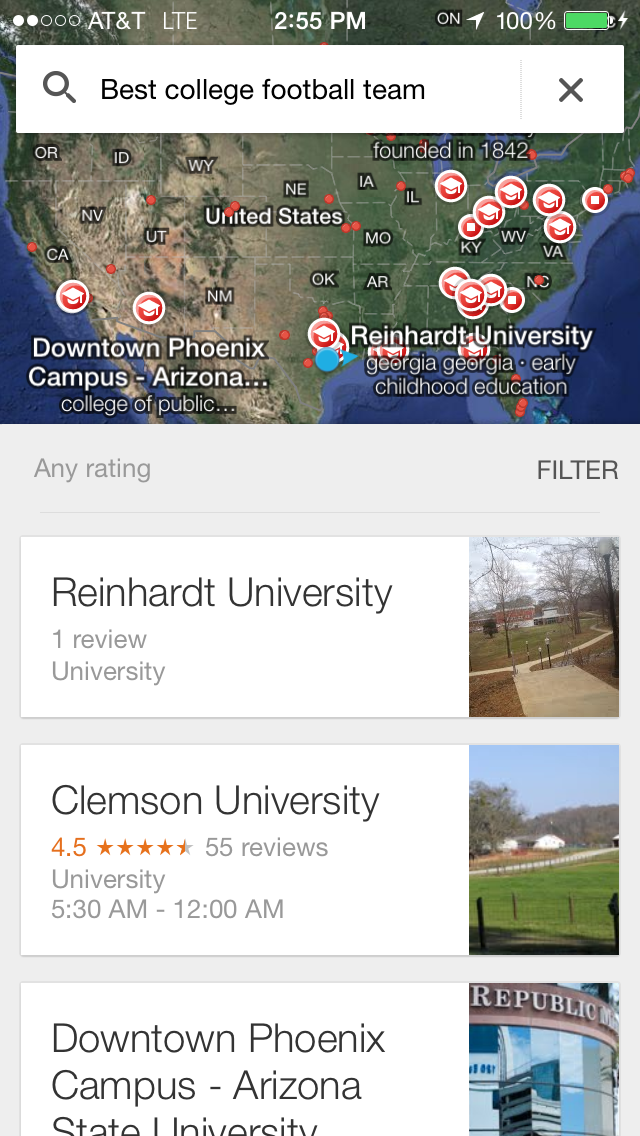 This is a pretty hot take. I don't know much about Reinhardt (to be known as "Grind Hard" from this day forward) University, I mean who have they even played? This is a question we ask about at least one team every year.

Who have they even played yet? 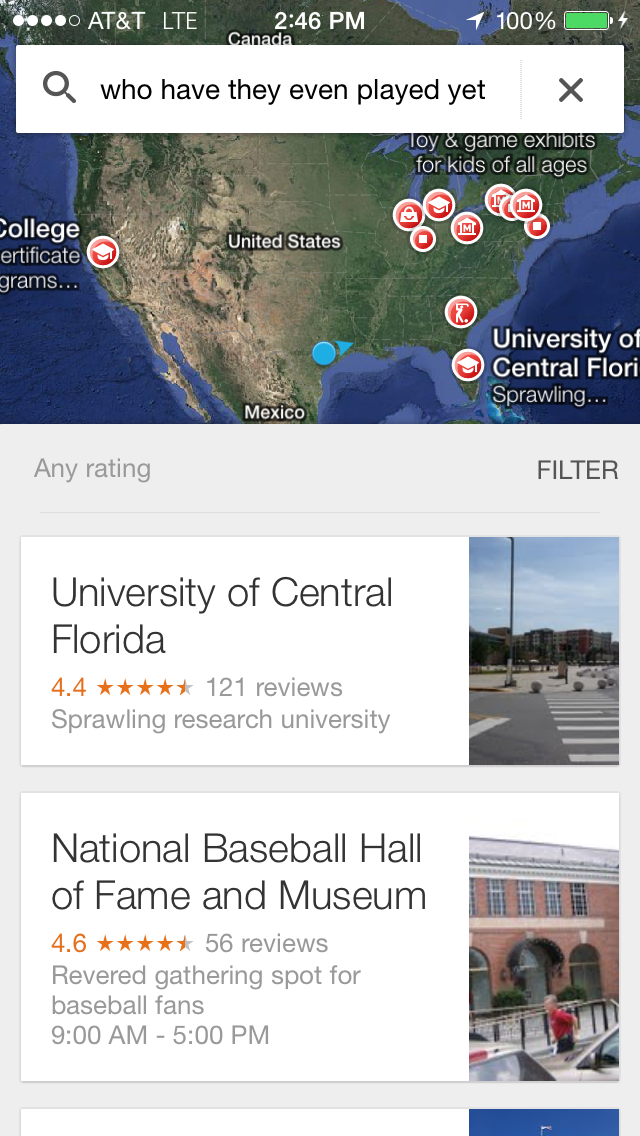 Both of those answers are perfect. 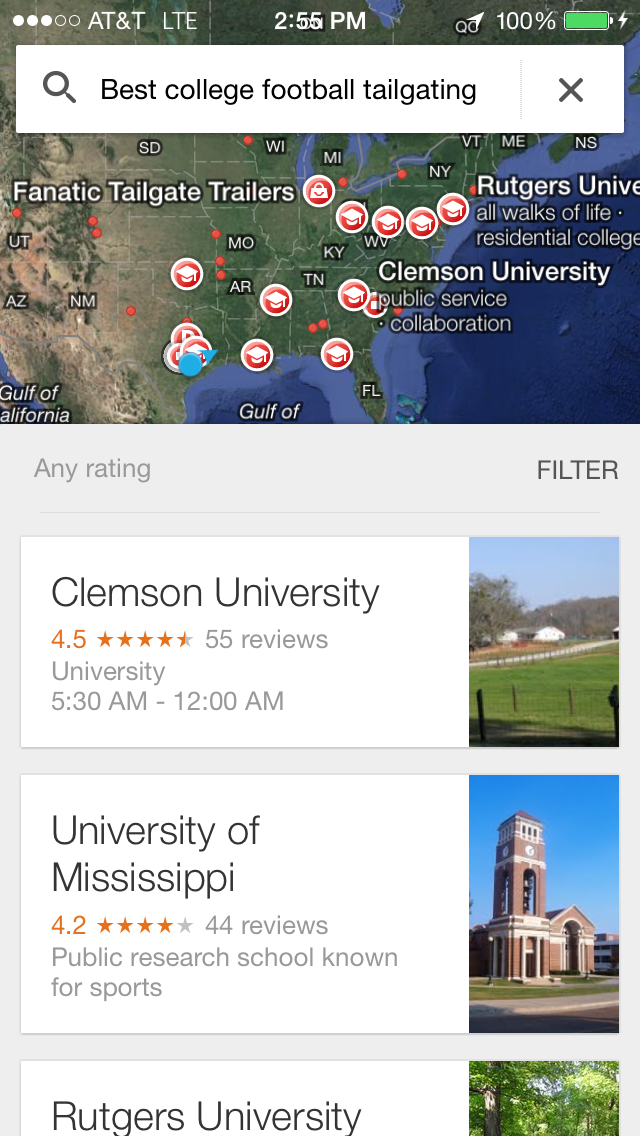 I've been to Clemson, and this is pretty dead on accurate. I've heard that Ole Miss is up at the top as well, but Rutgers? 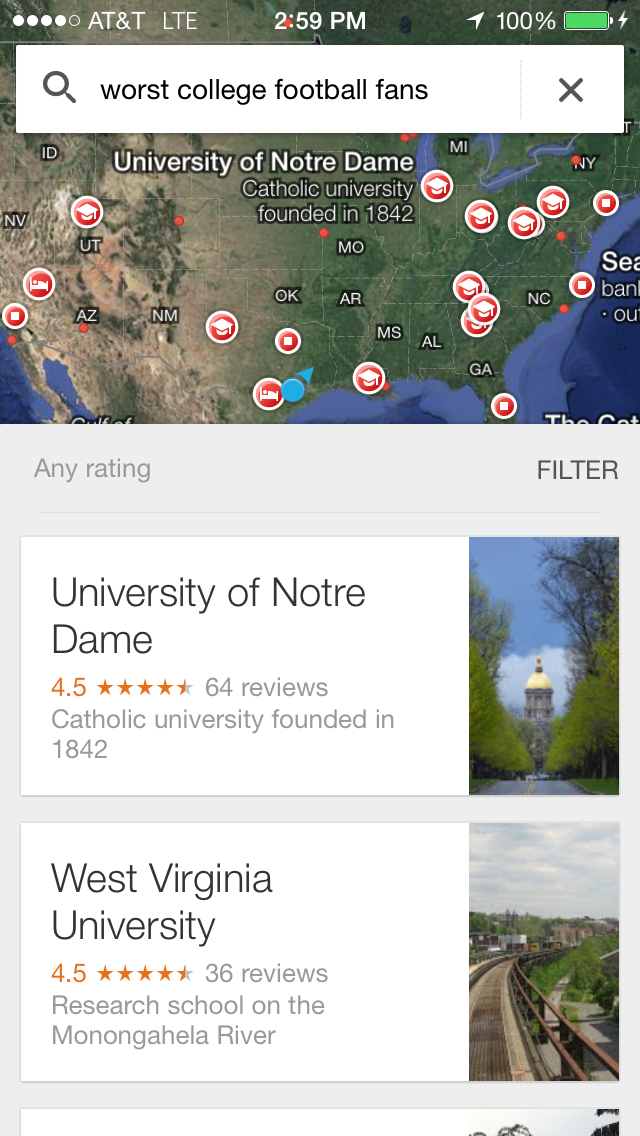 Well Notre Dame, you've got 10 years to clean up your act before we get there. West Virginia, you guys were always Big 12 ready. Glad we could do our part to make that official. 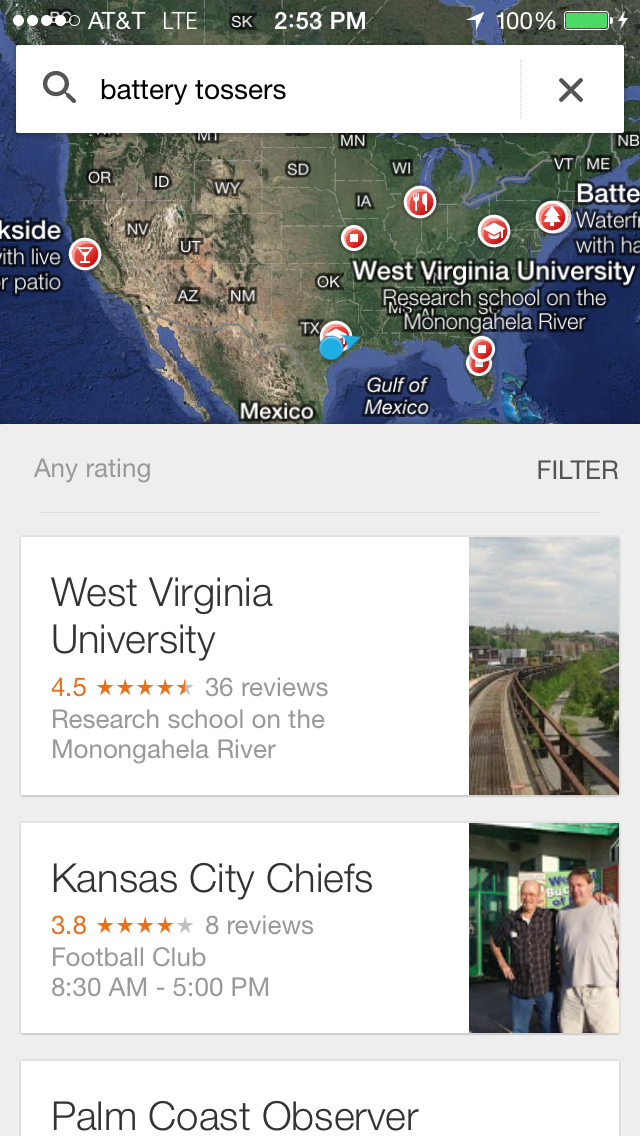 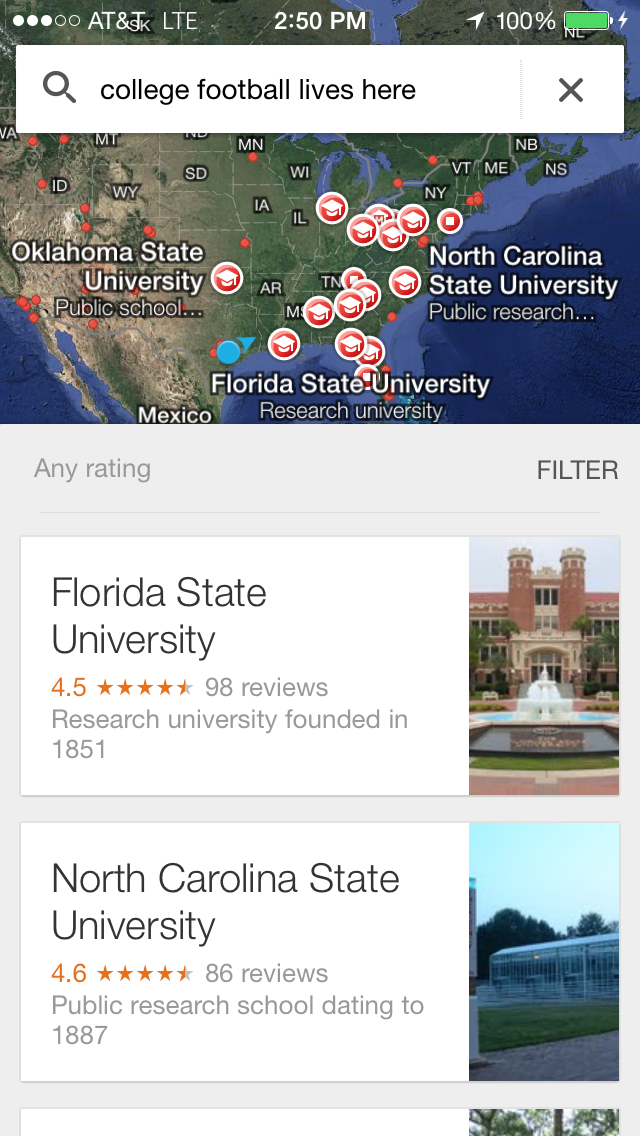 Google Maps knows a lot about Florida State, including its rap sheet: 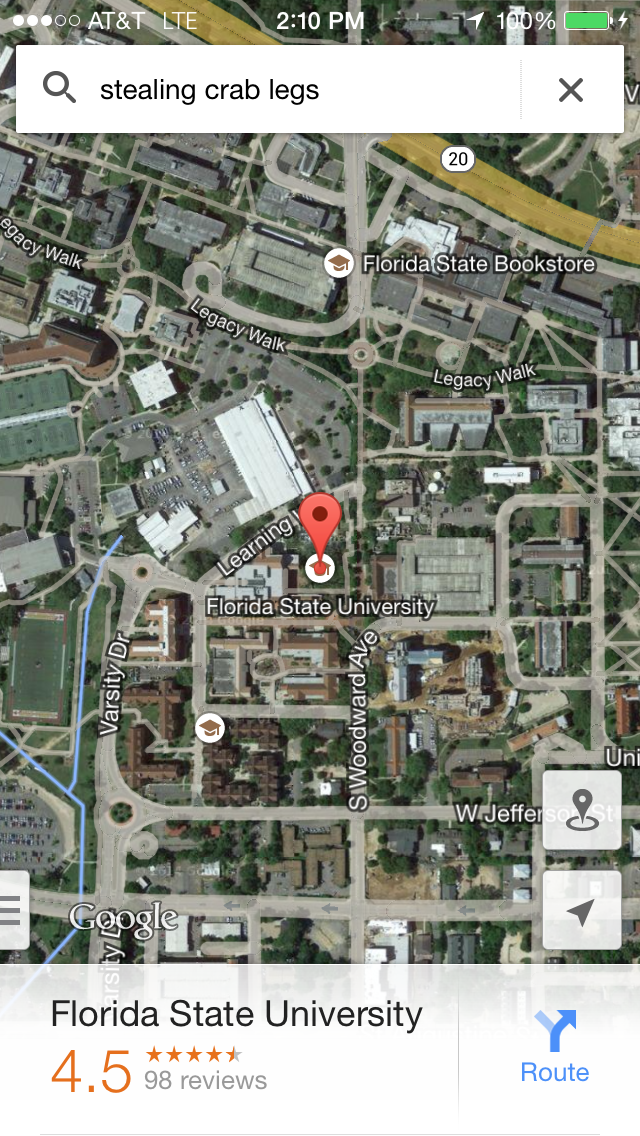 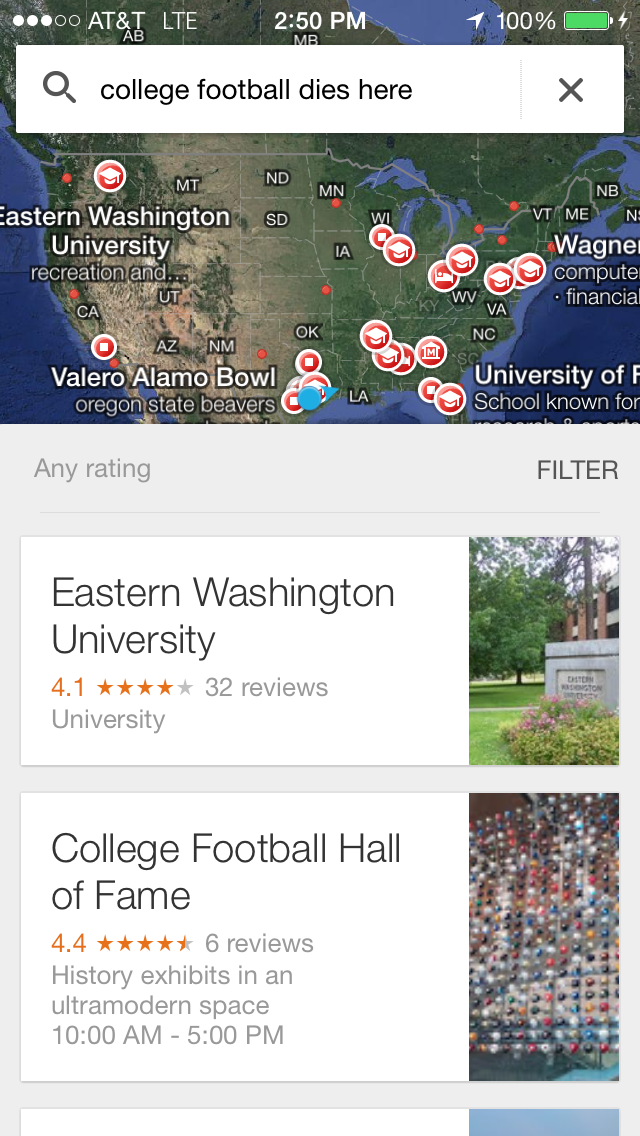 I have no input on the top answer. The second one is both literally and figuratively correct.

Now for the most important question facing Texas A&M this year: 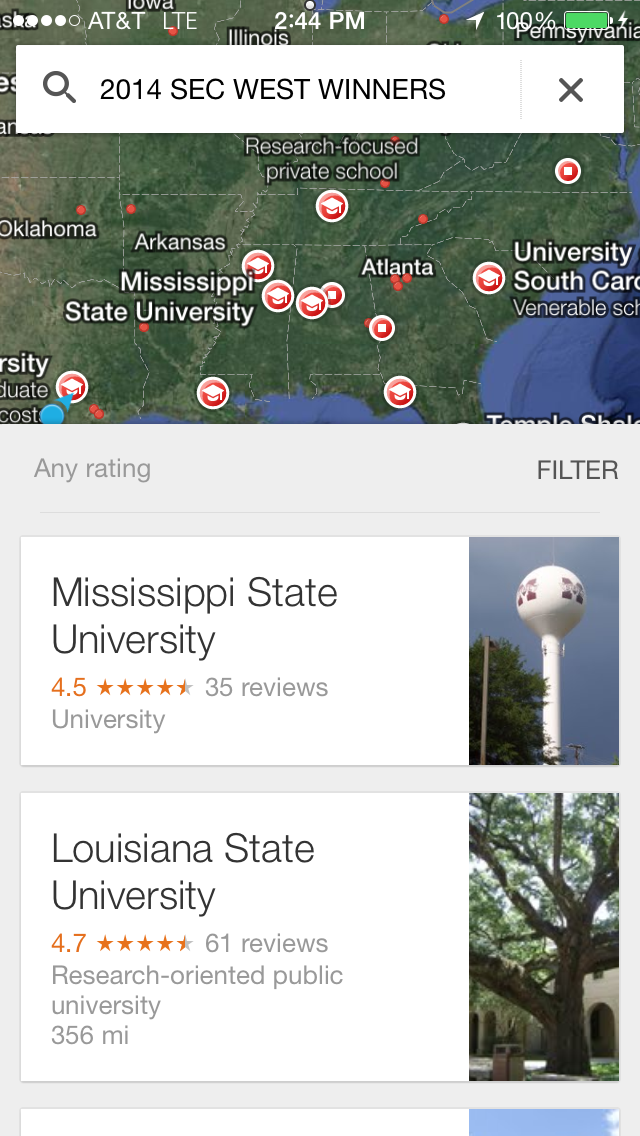 This is unfortunate. Apparently even Google Maps is sleeping on A&M this year, and according to Google, we're all sleeping on Derek Mason as The Best Coach In The SEC: 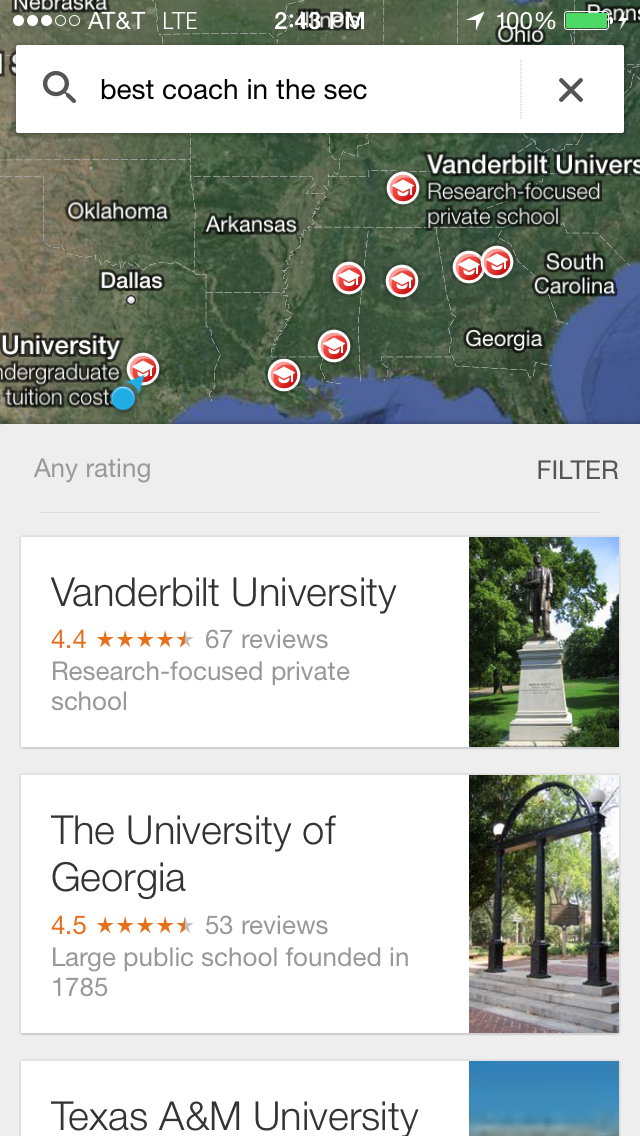 See you on the recruiting trail, Derek. 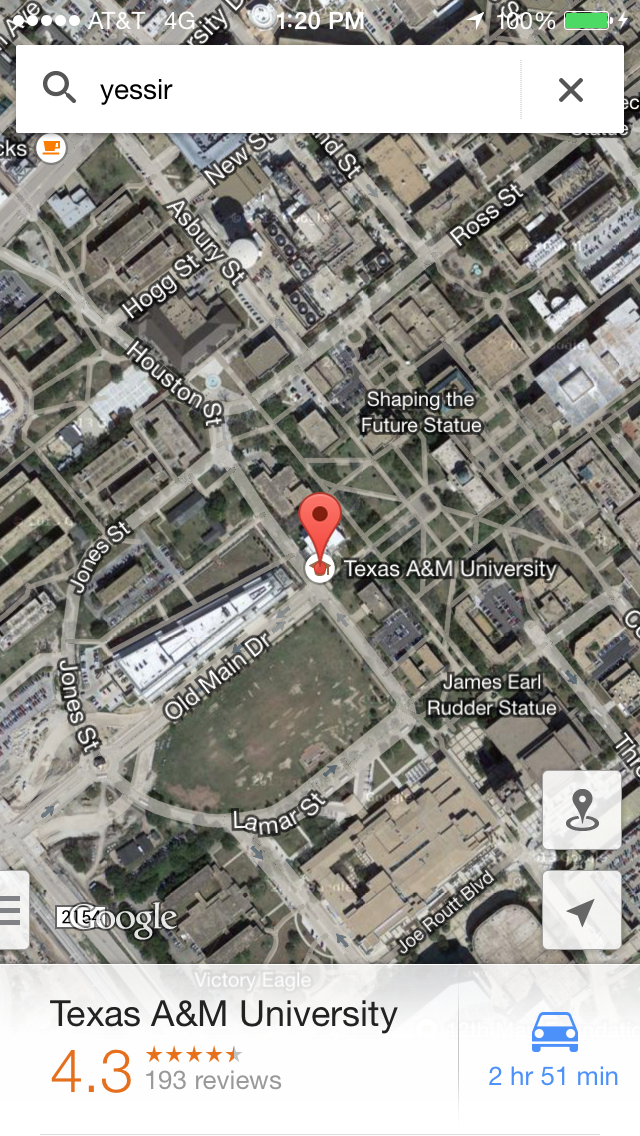