Time to talk about the game behind the game.

Share All sharing options for: Gameday Superstitions: The effort to harness mojo

I'm also not athletically talented or football smart in any way shape or form. I don't have the ability to contribute anything positive to the A&M football team. I also am smart and logical enough to know deep down inside that nothing I do on gameday can impact the outcome of a football game.

We all have superstitions, and I figured this would be a good opportunity for us to discuss them in light of what happened this past weekend. I'm going to share my experience with you, and I'd like for you to share how you contributed to A&M's winning efforts--because despite all rational thought, you changing your shirt at half helped us win.

I started off watching the game in our play room which is where I watched the SC game as well. Sat in the same spot, wearing the same A&M Adidas Climacool longsleeve I wore against SC. I was drinking a Shock Top Raspberry Wheat beer because they taste like candy. I was tweeting from my phone...but the key difference was that I had it plugged in using an extension cord (maybe that's where I went wrong).

The game was going poorly. I stayed in that position until the half, at which time I made the executive decision to do a few things:

So then the second half started and things still weren't going well. I started paying less attention to the game and helped my 3 year old put together some Thomas the Train tracks (thinking that maybe Aggie football would try to work harder in order to regain my love).
The fourth quarter started, and my buddies and I were texting. One was 100% positive that we'd win the game. I didn't like his confidence. It was disconcerting. I was also texting my friend Matt. He was negative, which made me feel like I was in a safe space. The two of us are normally pretty positive about football in general, but man we were at a dark place. So dark that I don't want to share our texts from the bad parts of the game.
We continued texting, and lo and behold the game started picking up. We get a 3 and out. Ed Pope scores and we're only down 7. All of this was going too well. I couldn't change anything. So naturally I became even more negative in my texts to Matt and he reciprocated. Another three and out. And then Josh Reynolds scores, tying the game up.
At this point I had the feeling we were going to win, but our mojo was predicated on us (me and Matt) being incredibly negative. Below are our texts going into overtime. 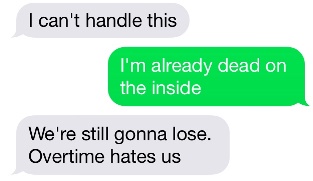 I'm sure that many of you can resonate with what we were going through. At this point, I knew were going to win. I absolutely knew it. We'd come alive and like Malcome Kennedy explained, gas had been thrown on the fire.
We get into OT, and Kenny throws his dart, and our defense steps up to the plate and the game ends. I can't help but feel accomplished. Somehow my efforts throughout the game had made a difference. Whether it was changing my clothes, or being negative with Matt...we'd been intentional about doing our part. And Matt shared my feelings. 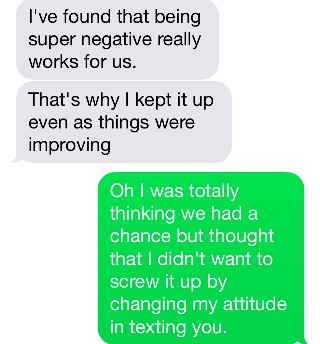 I know you can all relate to this.
I'm not going to ask why we do this, because I know. We want to feel a part of something. We want to contribute to the well-being of our team and we want some ownership over what happens. It makes no sense and yet it makes all the sense in the world.
But now I'm stuck. The shirt I wore for the first half obviously didn't work. Do I go back to that same shirt and consider the first half of bad mojo to be anomalous in the grand scheme of things? Or do I go with my second half shirt and try to ride this wave out?
This is important.
Help.