The legend of Texas A&M's "icy white" uniforms continues with a 52-28 thrashing of South Carolina.

I am not a superstitious person, but looking at the short history Texas A&M football has in their all-white (aka "icy white") uniforms since joining the SEC, I'm at least a little 'stitious. The Aggies are now 4-0 in this uniform since 2012 after a delightful 52-28 victory over the South Carolina Gamecocks on Thursday night.

Let's take a look back at the history of these uniforms, because re-living huge victories is fun. It's especially fun in GIF form. Shout out to TelcoAg, who's GIF-making prowess helped make this possible.

The debut of the icy whites? Oh, no big deal, just the biggest win in modern program history. A&M shocked the Crimson Tide by jumping out to an early 20-0 lead on the back of Johnny Manziel.

They then hung on for dear life in the second half, highlighted by a perfect touchdown pass to Malcolm Kennedy and a game-sealing interception at the goal line by Deshazor Everett.

Even two years later, this victory is viewed as the one that propelled A&M into national prominence, that showed we would be a force to be reckoned with in the SEC. To put it simply, this is we began to run this state.

The icy whites would make their next appearance in the AT&T Cotton Bowl. Following a dream 2012 season, many wondered how A&M would fare against former Big 12 foe Oklahoma. They said Manziel would suffer from the Heisman hangover. They said Bob Stoops knew how to defend the spread. They said our success had been a fluke. They were wrong.

The first half was competitive, with both teams showing flashes. But most importantly, Johnny did Johnny things.

Things got out of hand in the second half, as A&m pulled away for a statement victory. Even the officiating crew had trouble keeping up with A&M's offensive tempo.

And then there's this play that I honestly don't remember due to a combination of inebriation and euphoria.

But most importantly, the result was this. 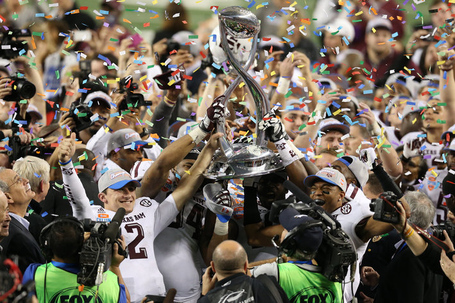 The icy whites made their first and only 2013 appearance against Ole Miss. Another year, another comeback victory in Oxford. This game truly had it all. It had Johnny getting hurt...

And finally, Josh Lambo getting mobbed by people...

And that brings us to 2014. We learned Thursday afternoon that A&M would wear this hallowed uniform once again, but could we muster that same icy white magic?

In many ways, this was the most unexpected victory of them all. Yes, Alabama was #1 when we beat them in 2012, but A&M was a popular upset pick that weekend, and Johnny Manziel was a rising Heisman candidate. Against South Carolina, hardly anyone gave the Aggies a realistic shot at victory. The Gamecocks were favored by more than 10 points, had an 18-game home winning streak and seemingly have a more experienced team, especially on defense. Kenny Hill was unproven and the Texas A&m defense was proven to be bad in 2013. That all sounds great, then the game started.

I guess the only question now is, #WhosNext?