I didn't watch the Chick-Fil-A Bowl on Dec. 31, but I assume this is how it went.

I didn't watch this game when it aired live, or maybe I did and I've forgotten in a post-new-year's drunken stupor. But either way, I feel it necessary to provide some insight into how this game might go.

The Aggies will start flat

Texas A&M was dealing with a lot of distractions going into this game. From bowl week festivities to special uniforms, there seemed to be a lot of things going on that had nothing to do with football. Heck, Johnny Manziel was so distracted that he seemed to struggle to complete even the simplest of tasks.

I expect all of the outside influences to finally rear their ugly head in this game.

The defense will be...well, ya know

Despite our best efforts, I'm pretty sure Duke knows what a wheel route is. With that in mind, expect the A&M defense to struggle getting off the field. If it's close late, turnovers could make the difference, and I just don't see the Aggie defense making the plays necessary to put them over the top.

Everybody's playing for next year

Let's face it, bowl games are meaningless, and coaches and players alike are already looking ahead to 2014. Johnny has one foot out the door, and if the Aggies get down early, don't expect any halftime speeches or late-game heroics. This guy just doesn't care about winning. And Kevin Sumlin, well, he'll be ultra-conservative on offense in order start the hype machine on Drew Kaser's 2014 Heisman campaign. 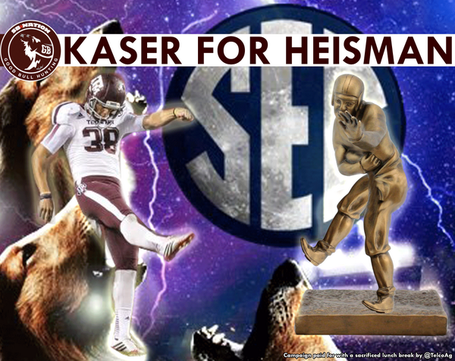 All of the above will cause A&M to fall into a deep first half hole against the Blue Devils, and the porous defense and out-of-sync offense will prevent A&M from ever mounting a serious comeback. And when this happens, I'll probably just change the channel at the half to catch the second half of "Independence Day" on TNT.