Film Review from the Aggie win over Rice

Share All sharing options for: Film Review from the Aggie win over Rice

I usually try not to read too much into these out-of-conference games that are really just glorified scrimmages.  Although no one will admit it, I feel like there is limited opponent-specific game planning that occurs and players aren't performing at the same level as they did a couple of weeks ago against South Carolina.  Thus, I try not to let these type of contests skew or alter my view of where this team currently is in terms of development and overall play.

(*Note: this is not to say that Rice is not a quality opponent.  They are our best out-of-conference opponent this season and could win 9-10 games and repeat as Conference USA champions.  Credit to Rice, their coaching staff, and players because they played as well as they could on Saturday night.  They just weren't walking out of Kyle Field with a W, and everyone knew that coming in.)

This doesn't mean we can't talk about some things we saw on Saturday night.  In the past with this weekly post, I've broken down one specific play or a series of plays with a central topic. This week, and possibly in the future, we will just hit a variety of topics briefly that I have picked up from watching the game.

I was both surprised and really excited to see #89 back on the field for the Texas A&M defense.  I'm not sure how many people realize just how clutch Ivan Robinson was last season for the Texas A&M defensive line, replacing Kirby Ennis after Ennis suffered a season-ending injury at Arkansas. Robinson stepped in and played well, when there was nobody else to even play at defensive tackle.  For those unaware, Ivan at one point "retired" from football this offseason due to injury, but has decided to try and play again.  Saturday night was his first action of the 2014 season.  In his first few plays, he was already making an impact.  Just take a look at these back-to-back plays he made against Rice by moving down the line to tackle the ball carrier near the goal line. 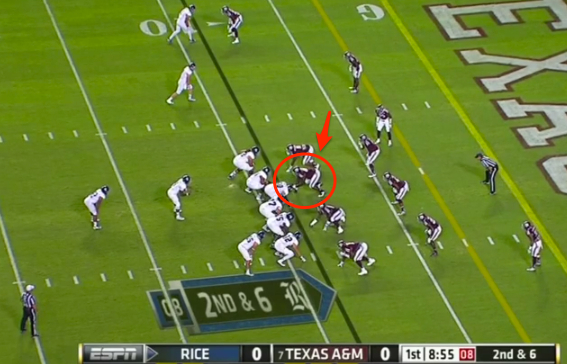 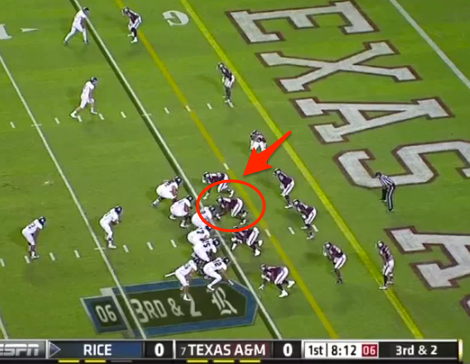 Rice would end up missing a field goal after the 3rd down stop.

Continued Use of Packaged Plays

During the preseason, we talked about how Texas A&M continues to be a leader in use of the "packaged play" concept.  Here is a look at the "stick-draw" concept where Kenny Hill is reading how both the linebackers are playing the inside receiver after the snap.  If the linebackers are playing the run by moving towards the middle of the field, Kenny will throw to the slot.  If the linebackers are retreating too early into coverage after the snap, then Hill will just simply hand off to the running back who hopefully will find a running lane in the middle of the defense. 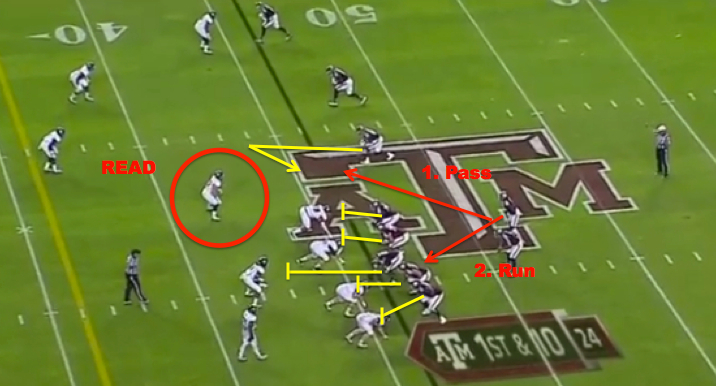 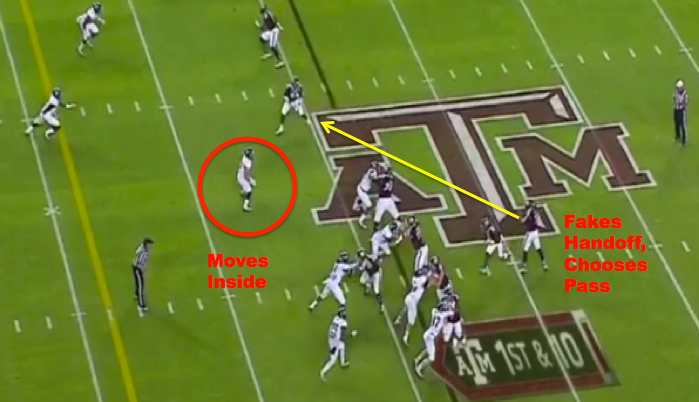 I was very excited to see Ben Compton get his chance to start for Texas A&M Saturday night, and play against the team he was committed to before signing with Texas A&M.  Ben has always been a valuable offensive lineman for Texas A&M, and deserved a chance to show what he could do with starting center Mike Matthews out with an injury.  The coaches took notice, too, naming him offensive player of the week.

I paid close attention to Compton throughout the game, and he played very, very well.  I'll go as far to say that Ben is the best back-up offensive lineman in all of college football.  Ben is a senior, and I am really curious to see if an NFL team gives him a shot at playing at the next level. You might think that is crazy considering he is a back-up, but you have to remember he is backing up Mike Matthews, and could start for numerous teams around the country.

This might be my favorite play from the game, where Ben Compton completed a key block to spring Brandon Williams on a nice run.  To set this up, Texas A&M first ran this same exact play two plays earlier on the first play of the drive for a 2 yard loss. After a 13 yard pass to Ricky Seals-Jones and a 1st down, the Aggies and Jake Spavital went back to this play which resulted in a 27 yard gain.

Now this is an extremely difficult play for the offensive linemen to block.  In fact, I can't remember if I have seen this coaching staff run this complex of a blocking scheme before.  This just shows how much coach B.J. Anderson thinks of his "maroon goons" up front.  On the play, both the center Ben Compton and right guard Joseph Cheek will pull around the left side of the line.  Those aren't the hard blocks.  The hard blocks are for right tackle Germain Ifedi who must quickly move across the face of the defensive tackle to stop back-side pursuit (again, extremely hard for even the best, which Germain Ifedi is) and left guard Garrett Gramling and left tackle Cedric Ogbuehi will go into their kickbacks before blocking their respective lineman, trying to drive them off the ball so the pulling center and guard can get on the edge for their respective blocks.  It wasn't a perfectly executed play, but Ben Compton makes the block which allows Brandon Williams to get to the edge. 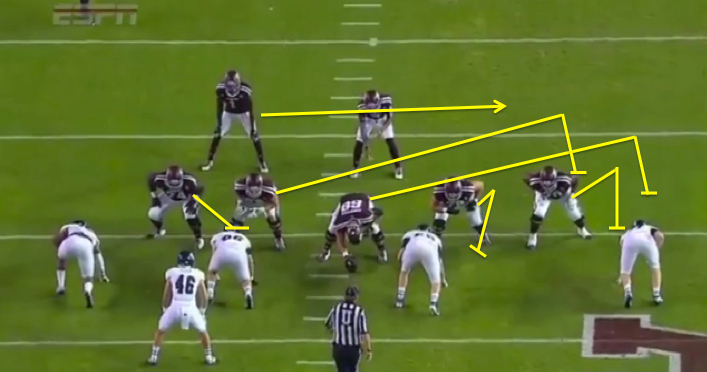 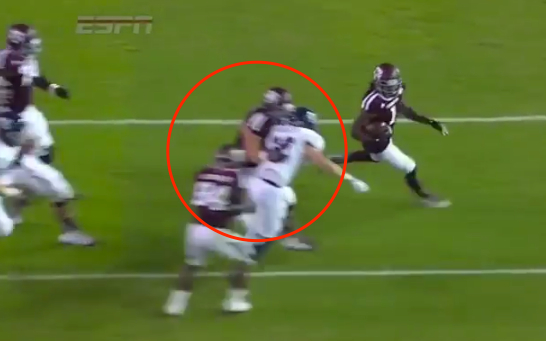 Finally, I just wanted to point out that we've had two consecutive weeks of an impact special teams play.  Last week against Lamar, it was a partially blocked punt.  This week, it was the blocked FG to end the 1st half.  Who was in the middle of both plays?  Ricky Seals-Jones.  Special Teams coordinator Jeff Banks has utilized Seals-Jones 6'5" frame two weeks in a row to put him in position to make the play.

Against Lamar, he lined up right over the deep snapper to run through the blockers and quickly extend and get a hand on the punt. 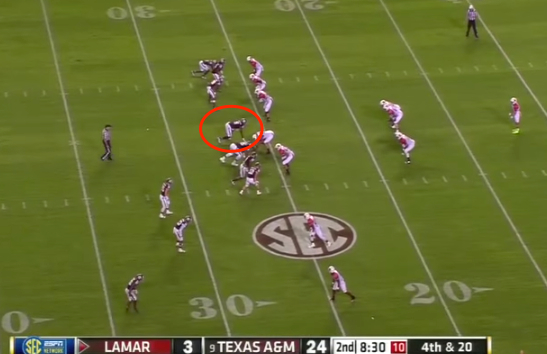 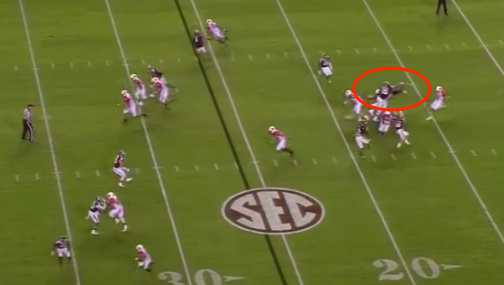 Against Rice, Seals-Jones was positioned behind a three man "wedge", who dived into the field goal unit allowing Ricky to jump and try to block the low field goal attempt. 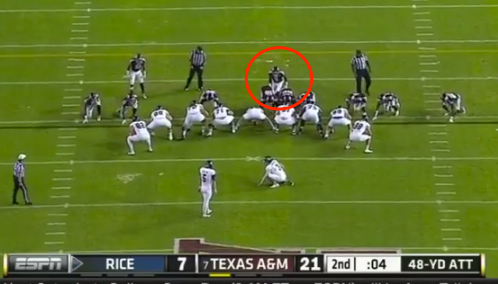 That is just good coaching and great execution.