On Thursday night, all eyes will be on the new quarterback of the Texas A&M offense, Kenny Hill. However, the most important "quarterback" on the field might just be Texas A&M middle linebacker Jordan Mastrogiovanni, as he takes over defensive calls and line adjustments for the Aggie defense.

Share All sharing options for: Man In the Middle: Aggie LB Jordan Mastrogiovanni

On Thursday night, a lot of viewers will be focusing in on the new-look Texas A&M offense that now features Kenny Hill and Speedy Noil instead of Johnny Manziel and Mike Evans. I, on the other hand, want to see the defensive unit in action.  I've read a lot of optimism about this group in the offseason, both on Twitter and Texas A&M message boards.  For Game 1, I don't have that same positive outlook.  I am expecting the defense to look like it did for much of 2013.  There are just too many new faces in new places to be a successful unit on opening night. That's not to say this unit won't grow together and become a solid group by season's end. It just won't happen (literally) overnight.

But if the defense were to put on a stunning performance on Thursday and prove me wrong, it would be in large part to the new man in the middle -- middle linebacker Jordan Mastrogiovanni.  Starting with spring ball, Jordan was essentially made captain of the Aggie defense.  The coaches will be holding Jordan responsible for both making defensive calls and line adjustments pre-snap.  That's a lot to ask of a young man who had only played middle linebacker once for Texas A&M: at the Chick-Fil-A Bowl.  We'll see pretty early how well Jordan can still handle the pressure while making plays at linebacker.

I went back and watched Jordan in that Chick-Fil-A Bowl game, and identified three key areas I'll be watching on Thursday night.

If you're going to play middle linebacker (sometimes referred to as MIKE) in the SEC, you have to be able to play the opponent's run game. Duke brought their option attack to Atlanta (now in Gainesville with offensive coordinator Kurt Roper, who now has the same job for Florida), and ran all over the Texas A&M defense, especially in the first half. Let's look at a 3rd and 1 play from right before halftime. 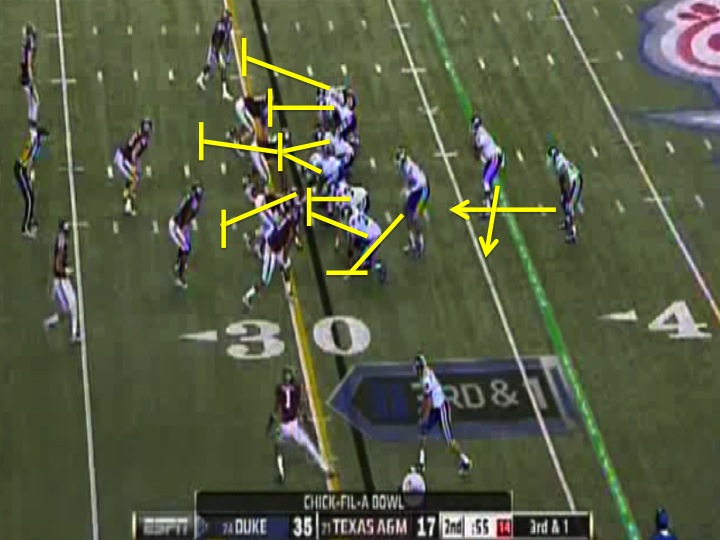 This is an option play that Duke ran all night. During the Chick-Fil-A Bowl, the Texas A&M defense aligned in either a 4-2-5 or what I'm calling a "3-3-5 under" -- 3 down lineman and 3 linebackers, but with Nate Askew playing on the line of scrimmage as a stand-up edge rusher.  On this particular 3rd and short, they line up in that exact 3-3-5 formation.  With only 3 defensive lineman on the field, the Duke offensive line will double-team the Texas A&M defensive lineman while working up to the linebackers as shown. 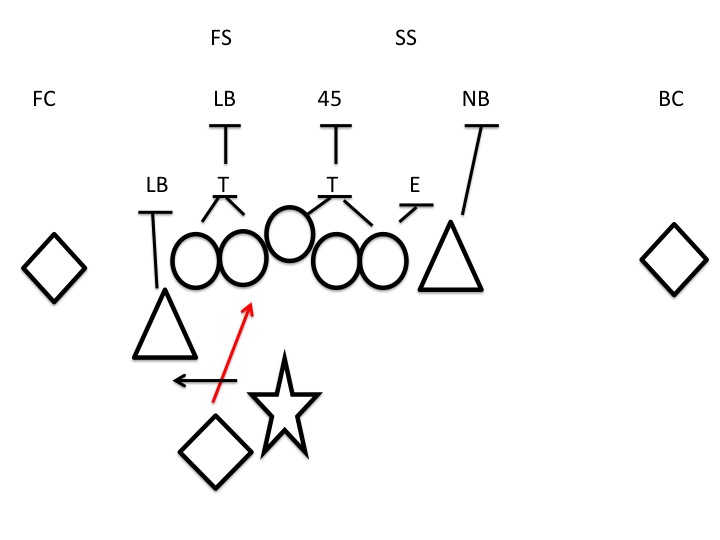 With this particular alignment, I think it is important to discuss gap responsibility.  Ideally, each gap (A, B, C) on each side of the offensive center would be occupied by an Aggie defender, leaving no free holes for a running back to run through.  I've debated the assignments of the linebackers in my head several times due to the weird defensive alignment and have flip-flopped on Mastrogiovanni's assignment several times. I originally believed he was responsible for the "B" gap to the right of the center (shown below).  But I'm also not sure who was responsible for the "A" gap on the left side of the center, which is right where the running back will go on this play to pick up the first down. This may be debatable. For now, I've shown Jordan responsible for both gaps (which is highly unlikely). 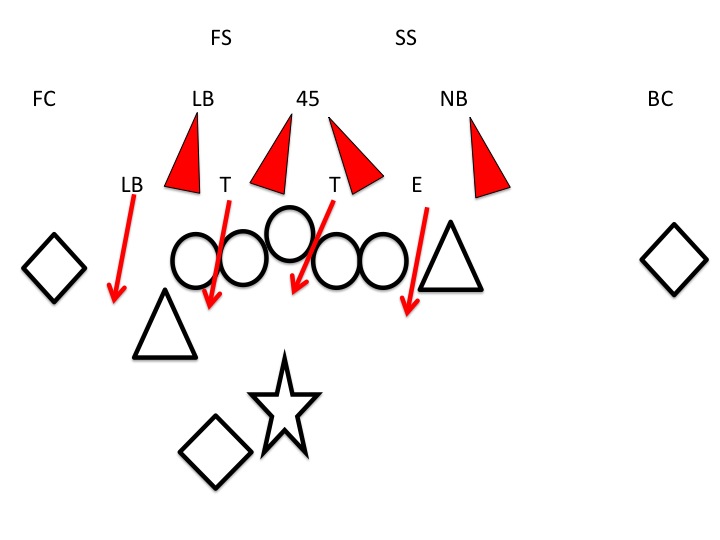 But the reason I'm showing you this is that too often Jordan lets himself get blocked on the 2nd level, creating easy running lanes.  Now, let me make it clear this isn't entirely his fault.  It doesn't help he plays behind defensive tackles who can't hold offensive lineman at the line of scrimmage or occupy double teams, allowing Jordan to make plays unblocked.  But Jordan has to take a share of the blame as well as he should know how to take on a offensive lineman and quickly move free to make a play. He shouldn't be expected to always do this, but on critical downs like this 3rd and 1 play, top defenders have to make exceptional plays if you want exceptional results. 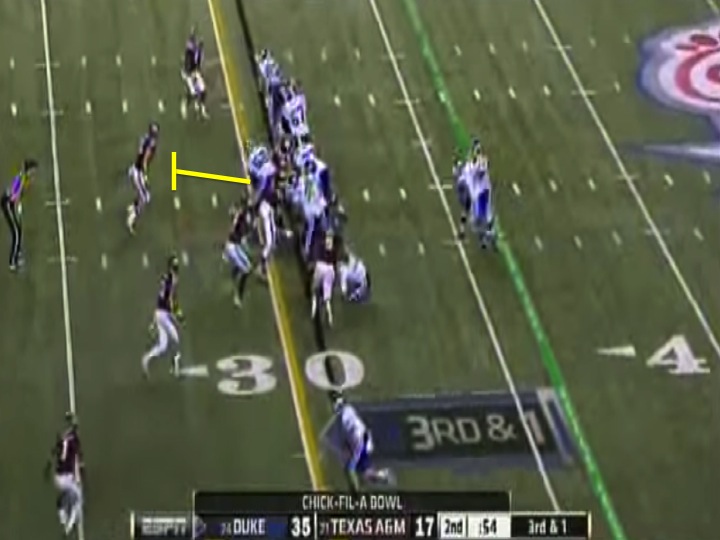 Here, the Duke center moves off of his double-team and blocks Mastrogiovanni downfield.  With Jordan occupied, this leaves an open hole for the running back who easily picks up the first down and 8 more yards. 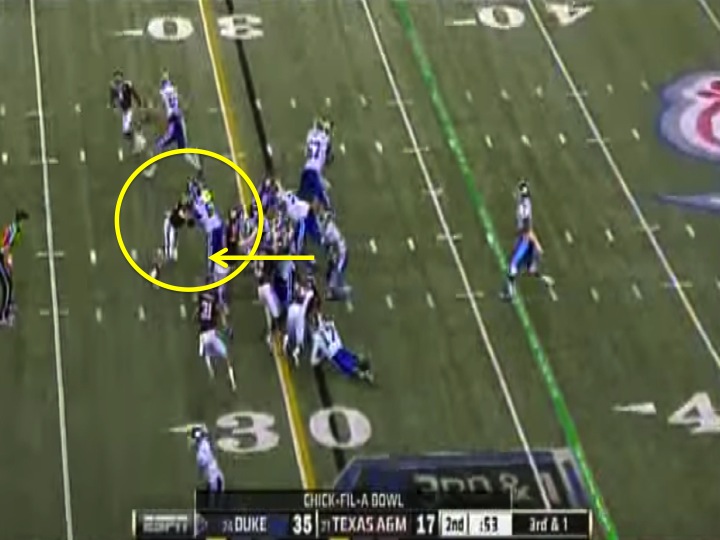 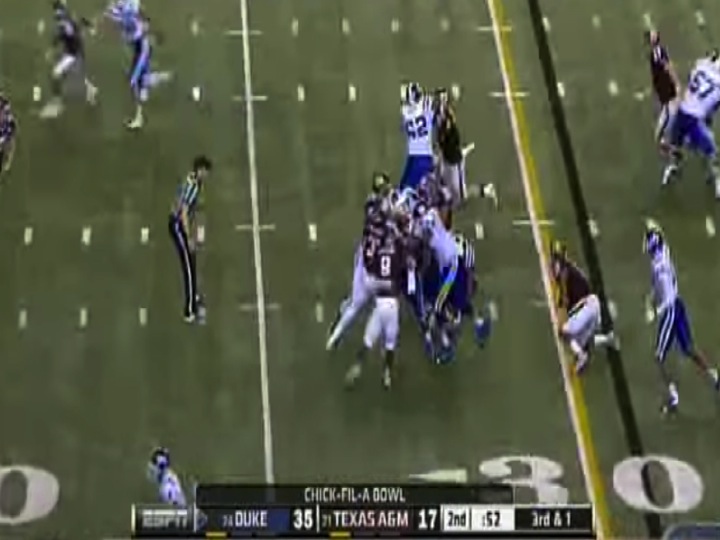 I'm not sure of the defensive tackles in front of Mastrogiovanni who are responsible for keeping him free in the middle have improved over the offseason.  Meaning, I don't know if Jordan gets any more help on Thursday night than he got in the Duke game.  If he doesn't, he has to come through a couple of times and make a hard play. I'm making it sound easier than it is, but that is the difference between a top defense in the conference and the bottom defense in the conference.  After all, the coaches have made him our defensive bell cow.

After watching Jordan, one question I really have about his game is whether or not he can make plays sideline-to-sideline.  I believe his range may be somewhat limited.  This next play illustrates that.

This will be Duke's first touchdown of the Chick-Fil-A Bowl, and they will score on a simple swing pass to the running back.  The left tackle will run into the flats and be the lead blocker for the running back, while the outside receiver will try to crack-block Mastrogiovanni by coming across the formation. 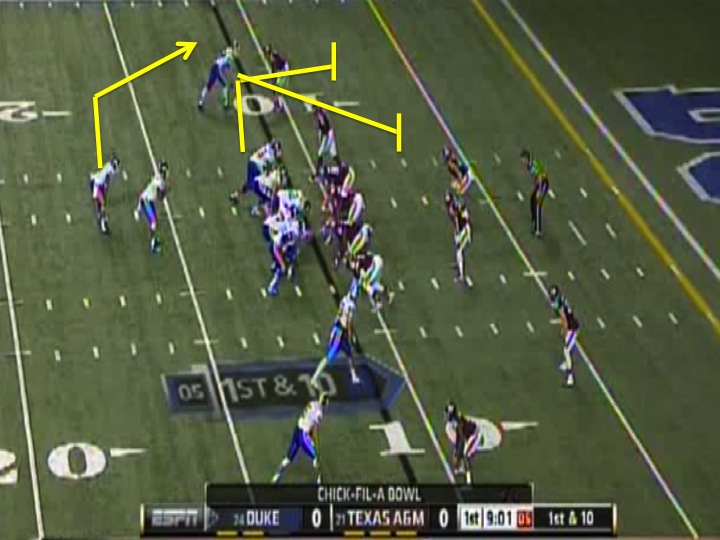 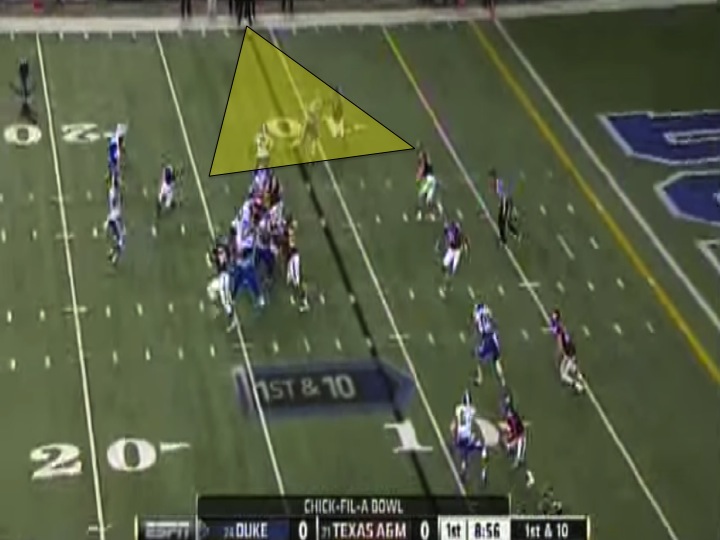 As seen in this frame, Jordan has the angle to the sideline to make this play by either tackling the running back, forcing him out-of-bounds, or forcing him back to the middle of the field where hopefully other Aggie defenders are ready to clean up the play and make the tackle either short of the first down or short of the touchdown. 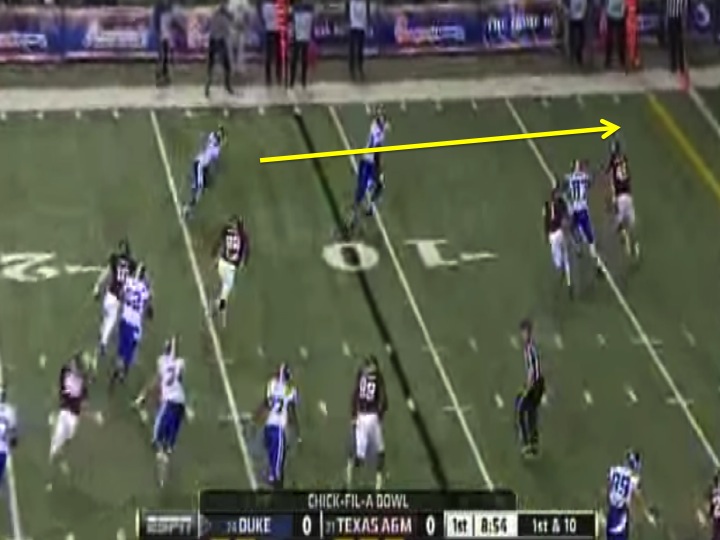 Even after appearing to have the angle, the Duke offensive tackle gets to him before Jordan can get to the sideline, allowing the running back to walk into the end zone. 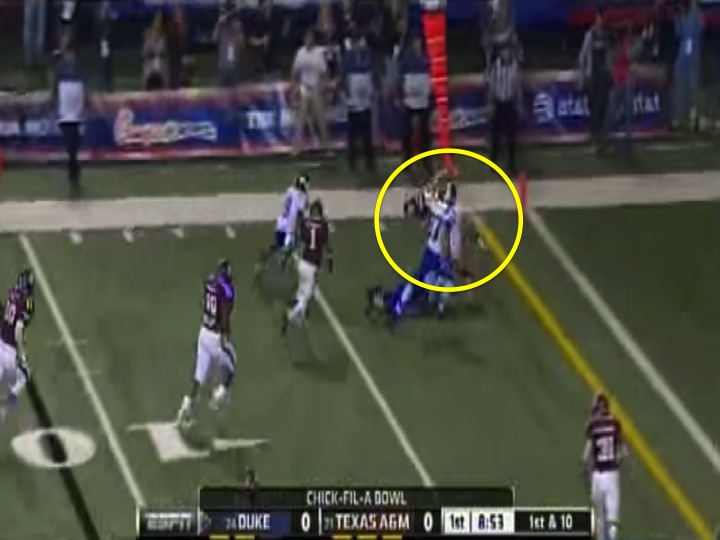 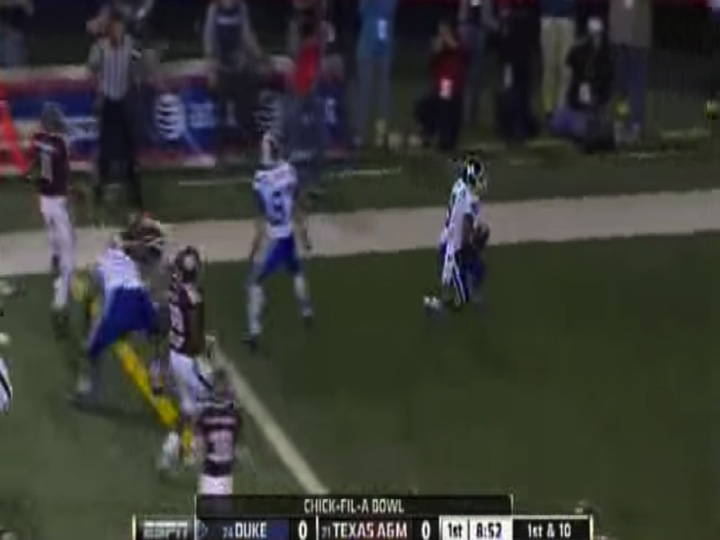 So what happened?  Jordan read the play at the start, but couldn't finish.  Was his speed to the sideline a factor?  Maybe, or it could have been his conditioning.  This was play eight on the drive that elapsed 3:40 minutes of game time.  If it is tiring out and not being in game-shape (remember Mastrogiovanni only played sparingly over the course of the season as Darion Claiborne was the starter at MIKE), then I'm not sure he'll be spelled that often by Justin Bass in order to catch his breath.  He'll have to play a majority of the time.  I will be watching his sideline-to-sideline movement to see if there is any truth here. We'll find out soon enough.

To go along with playing sideline-to-sideline, Jordan also appears a little raw in pass coverage.  That's somewhat to be expected for a young player.  Against South Carolina, a team that is going to be run-first with Mike Davis, the defense also has to be prepared for Spurrier's play-action. The Aggie defense bit hard on the play-action in short yardage situations a couple of times against Duke. 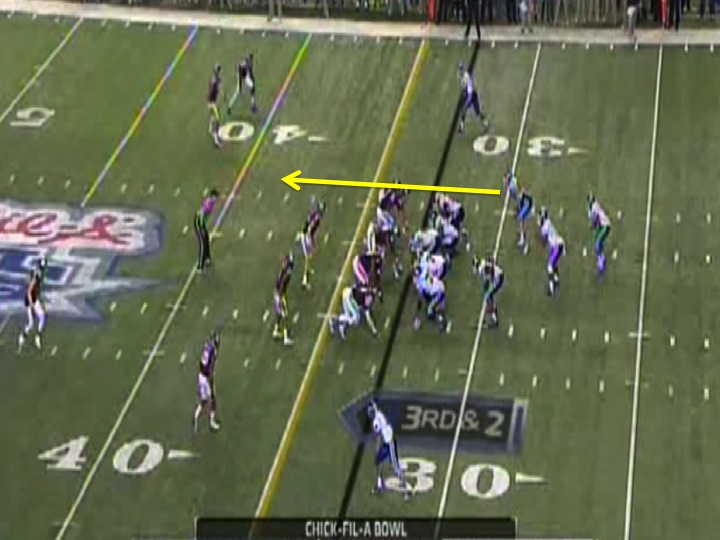 This formation that Duke uses is somewhat similar to the option play shown above, just with the tight end on the right side of the offensive line moved off the line and into the backfield. This change in formation and personnel should have been a tip-off to the defense that something was up. The quarterback will open up as to be handing off to the running back on the dive, and even the tight end comes across the formation in an arc block to sell the run look. But it is the offset tight end who will run right up the seam of the defense on this play to make the catch and first down. 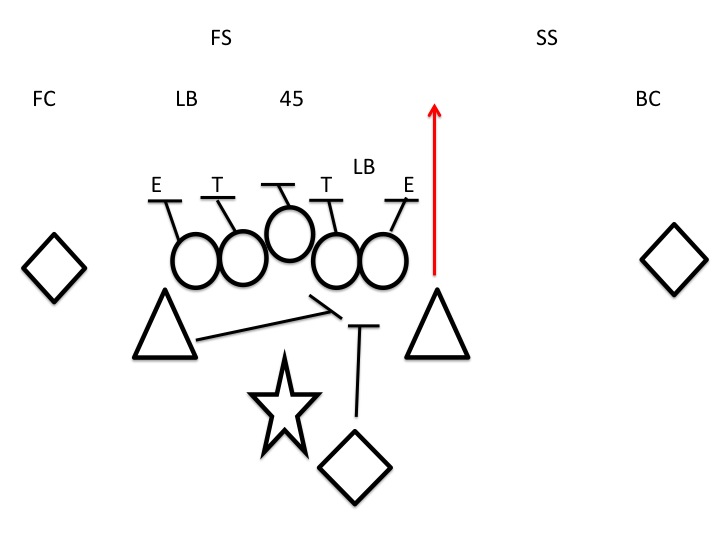 The linebackers all bite on the action in the backfield, leaving a nice open zone for the seam route by the tight end. 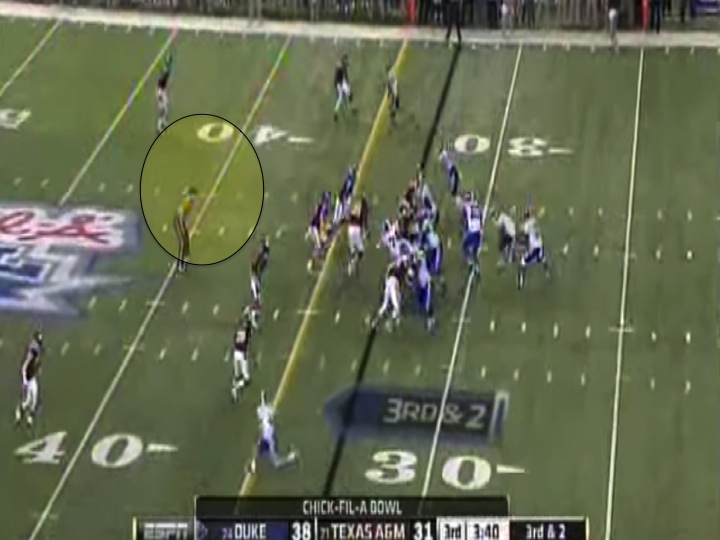 Even after recognizing the fake, the linebackers (including Mastrogiovanni) have to get back into position to make some sort of play on receivers in routes. 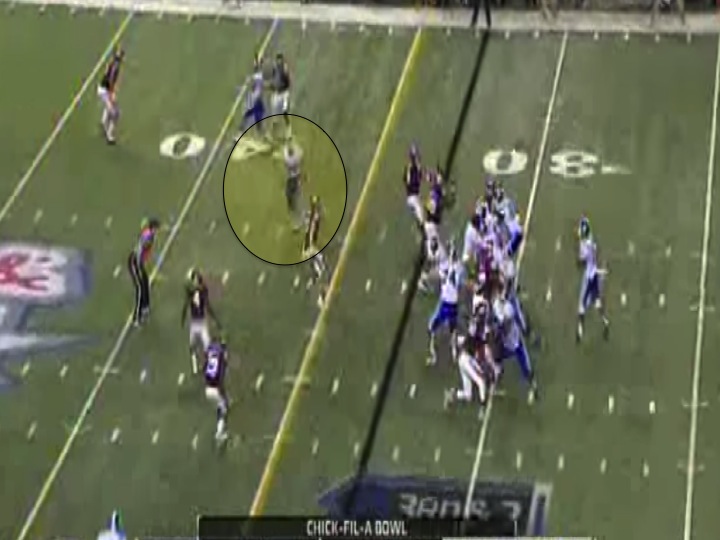 Mastrogiovanni doesn't have enough agility to make this play in space, and it is an easy catch in the middle of the defense for a first down and big yardage.

(It is important to note here that Steven Jenkins totally abandons his assignment on this play and is probably more responsible for the tight end out of the backfield instead of Mastrogiovanni. It is debatable whether what Jenkins' exact assignment was -- if it was a Cover 3 call, Jenkins may have had coverage in the flat, away from the middle of the field leaving Jordan alone with a lot of real estate to cover.) 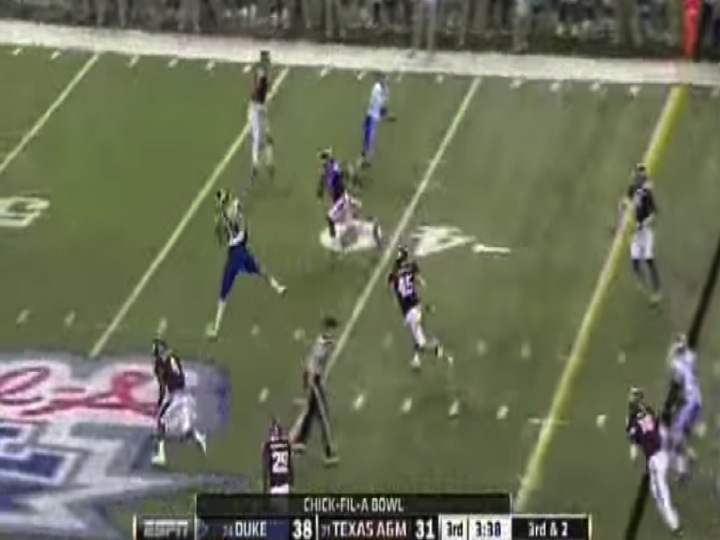 Make no mistake, Jordan's coverage ability will be tested over the middle, both by combinations of drag routes, dig routes, and deep crosses.  From watching Mark Snyder's defense, I don't see Jordan having too many man-to-man coverage responsibilities, other than the occasional running back coming out of the backfield.  Jordan will play more zone coverage over the middle, and will have to take his coverage deeper than what he has shown and must have the ability to accelerate in short spaces and make sudden change-of-direction responses to play sound zone coverage. So far, I haven't seen that to date.  It's just another checkbox I'll be looking for from Jordan to start the season.

The middle linebacker spot is Jordan's job. He cannot play poorly, because I don't believe we have anyone else on the roster currently who can play middle linebacker without causing massive rearrangement of the entire position. We don't need 2013 again.  A lot will be expected of Jordan, but that is only because he has abilities to become a great player and leader. If this defensive unit is expecting to become respectable again, it begins with Mastrogiovanni.  As he goes, the rest of the defense goes. A lot of questions will be answered just by putting the spotlight on this young man Thursday night.

The stage is yours, sir.