The Continued Evolution of the Texas A&M Offense

The Texas A&M offense has been the best in college football for the past two seasons. With Heisman Trophy winner Johnny Manziel now in the NFL, how will the offense continue to develop and evolve?

Share All sharing options for: The Continued Evolution of the Texas A&M Offense

Sometimes, the numbers lie.  A more significant stat for this discussion would be seconds between plays in real time, not game time.  Unfortunately, that is a very difficult stat to track.  If we were to calculate that number, however, we would see that Texas A&M's pace of play was not as efficient in 2013 as it was in 2012.  Part of the reason was the change in run/pass percentage.

If Texas A&M wants to get back to the pace at which they played at in 2012, they will need to utilize their running backs more this coming year. With a loaded backfield of Tra Carson, Trey Williams, and Brandon Williams, there is no excuse not to increase the running back rushing attempt percentage from around 32% to close to 40%. The backfield weapons deserve to be utilized more. Play calling is also important. Under Kliff Kingsbury, Texas A&M would line up quickly after a gained 1st down and just run a quick dive with Ben Malena to keep the clock running. Last year, that quick dive play was replaced by a pass play which might fall incomplete, thus stopping the clock and offensive flow. Increased pace can be as simple as the 1st down play call.

One of the newest phenomena in football is the "packaged play." These plays combine the offensive line blocking for a run play, while the wide receivers run short pass routes or screens. The quarterback is then left to decide quickly after the snap of the ball whether to hand the ball off to a running back or throw the quick route/screen. He bases his decision off of how the defense is aligned or how the defense plays either the run or pass after the snap of the ball.

Texas A&M has not shied away from this new evolution in play design, and in fact has been one of its first adopters. Here is an example from last year's Vanderbilt game. 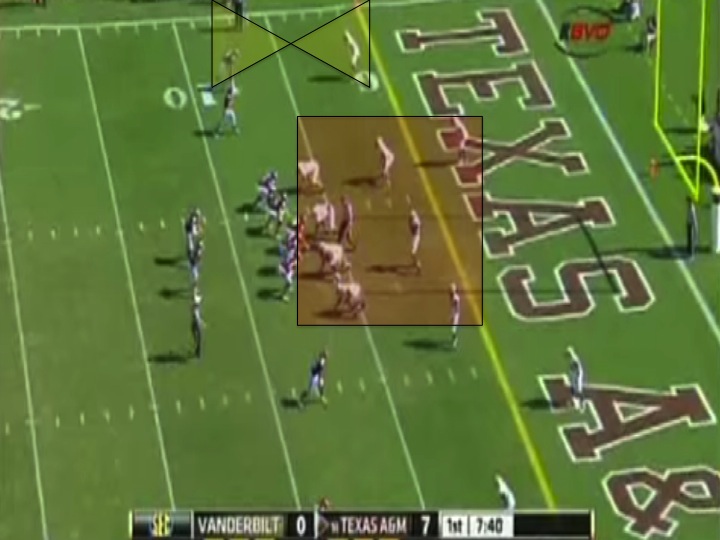 On this first and goal play from the Vanderbilt 6 1/2 yard line, Texas A&M quickly lines up in a regular 2x2 formation, with two wide receivers on each side of the offensive line. Being so close to the goalline, notice how many Vanderbilt defenders have lined up in "the box" which is shaded red in the image. There are 8 Vanderbilt defenders around the Texas A&M offensive line, anticipating a run from Trey Williams. The defender playing most out-of-position is the safety in the upper right hand corner. His alignment leaves LaQuivionte Gonzalez uncovered in the left slot. 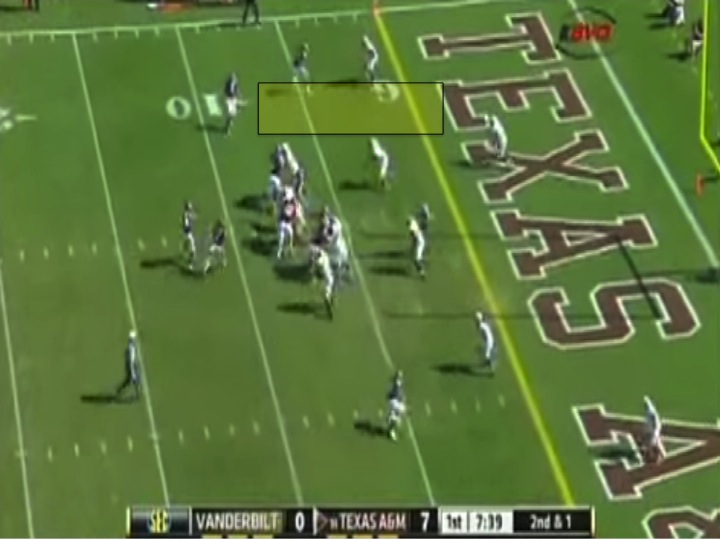 After the snap, Johnny Manziel recognizes this defensive alignment and how much space there is for Gonzalez to work with (in yellow). He quickly throws the screen to Gonzalez. 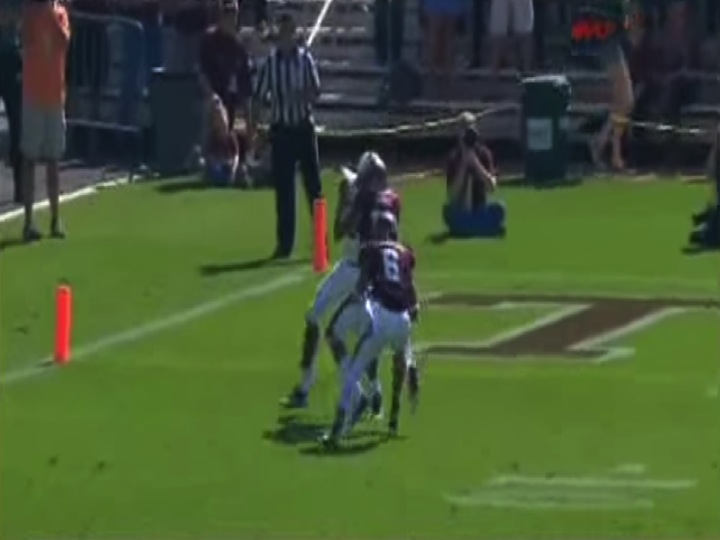 All Gonzalez needs is a good block on the outside by the other receiver, which he gets, and easily scores on the play. 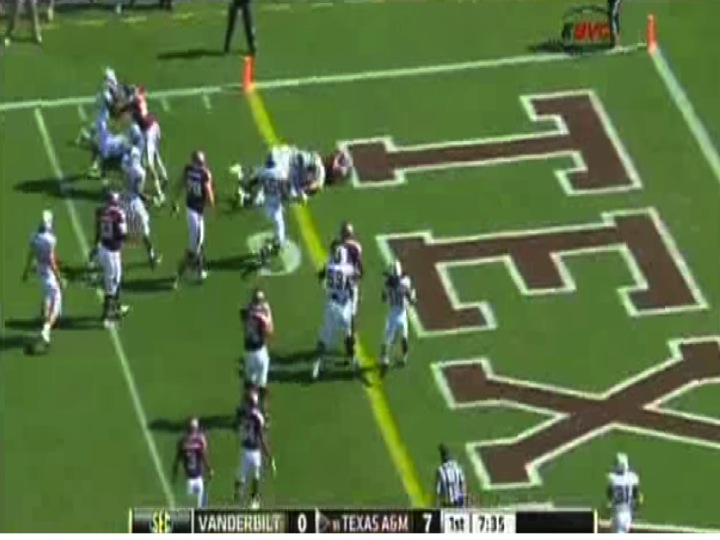 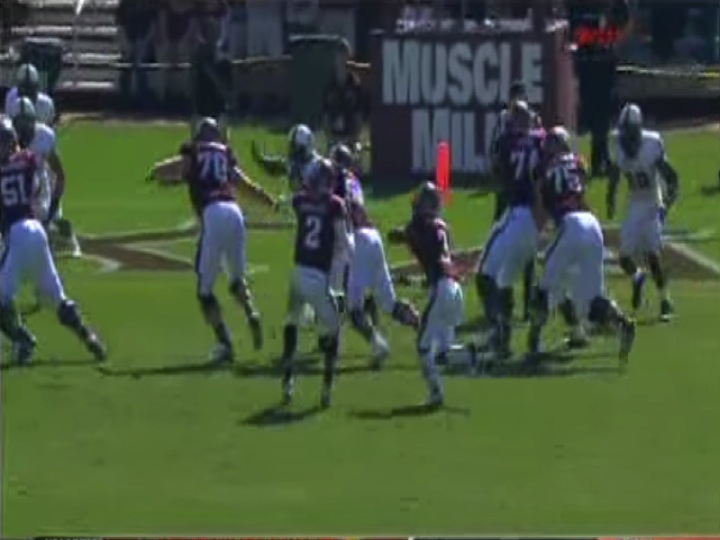 How can you tell this is a "packaged play"? Just look at how the offensive line is blocking. There is a double team by guard Germain Ifedi and tackle Jake Matthews on the outside, and Trey Williams is ready to receive a handoff. 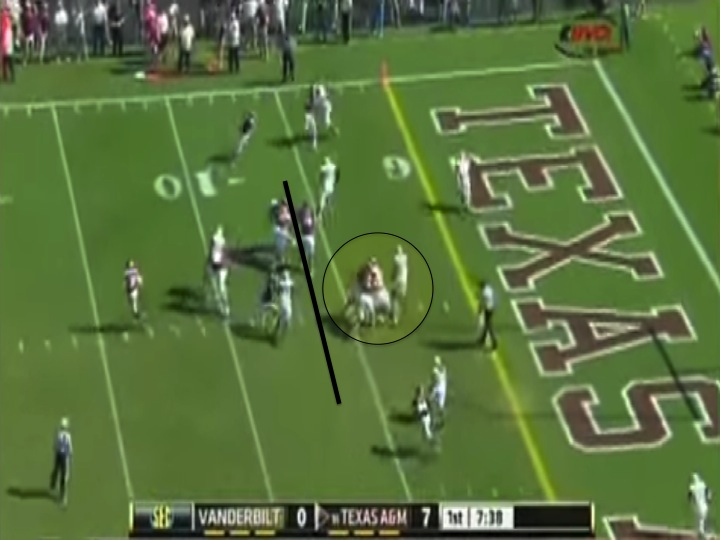 But the biggest giveaway is always watching the offensive linemen block downfield. On the above image, I've drawn in the original line of scrimmage, and you can see several offensive linemen blocking downfield (highlighted). Linemen would never do this if the play is a called pass. A flag should be thrown on these plays for "illegal blocking downfield", but it never is. Until the referees take a hard stance to enforce this rule, you will continue to see more and more teams run these types of packaged plays.

This isn't the only packaged play that Texas A&M runs. They also like to run the stick-draw, where the QB reads a quick hook by the inside slot receiver before handing the ball off or taking off on a QB run. Ian Boyd with SB Nation's Football Study Hall just recently described how South Carolina may defend A&M's stick-draw on opening night.

Incorporation of Cam Clear into the Offense 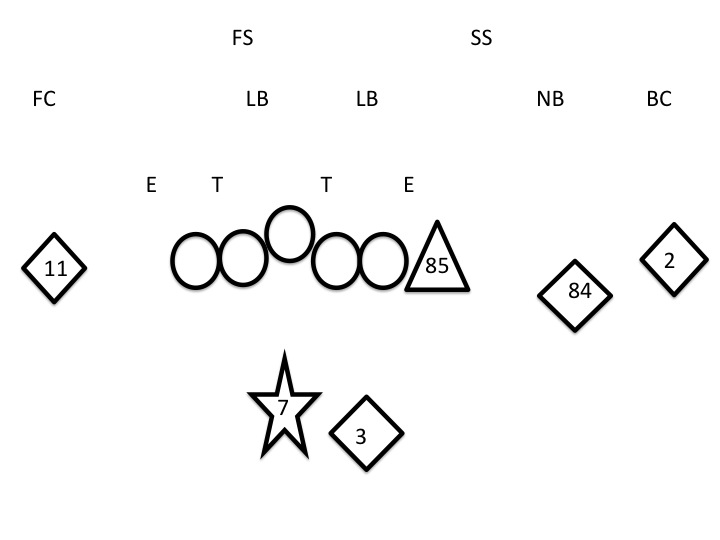 The above image represents one of many personnel packages Texas A&M may use in 2014: 3 WRs, 1 RB, and 1 TE.  Now let's explore the variety of formations that Texas A&M can utilize with this one personnel package. Imagine all of these same formations being used over the course of a drive without having to change the players on the field, thus being able to go hurry-up, no-huddle. 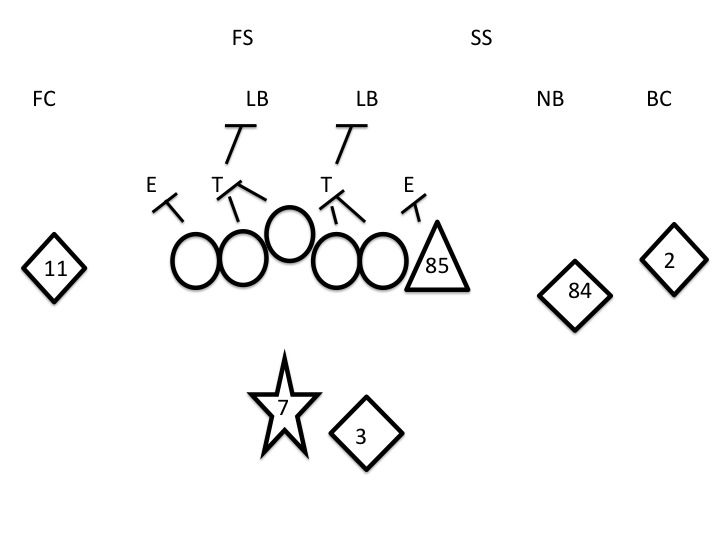 At 6'6" and 280 pounds, Cam Clear can be thought of as a 6th offensive lineman when he is playing a natural tight end position at the end of the offensive line. If the defense play a cover 2 shell as shown here, Texas A&M can use 6 blockers to block 6 defenders in the box, making it an easy gain on the ground. 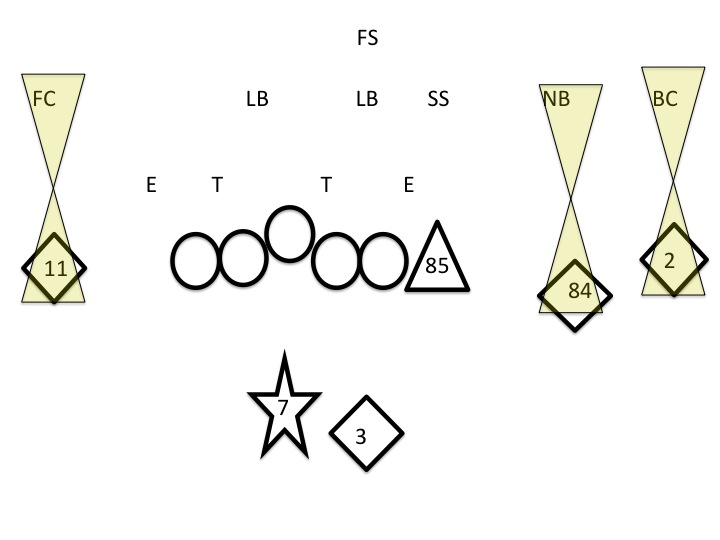 After a few 7 or 8 yard gains, the defense will want to bring down a safety to play closer to the line of scrimmage. Most teams in the SEC will choose to play a cover 1 or man defense in this situation, leaving receivers like Speedy Noil and Malcome Kennedy with one-on-one matchups to beat their man in pass routes. 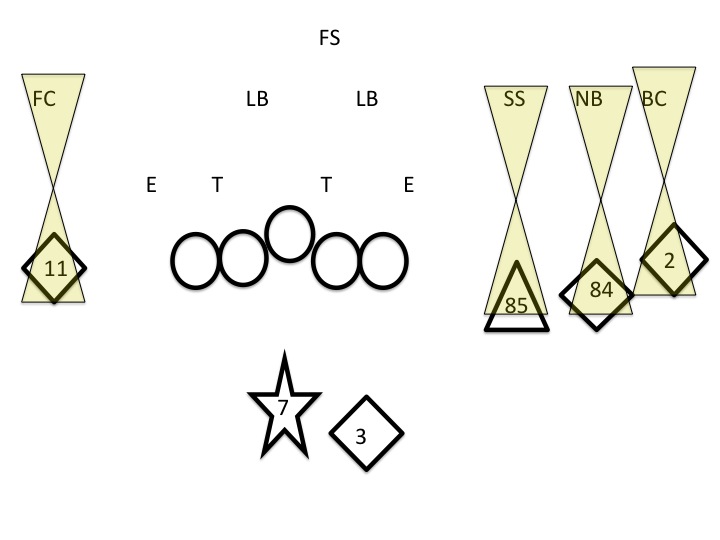 Aside from playing at the end of the offensive line, Texas A&M can also spread Cam Clear out as a 4th wide receiver, giving them the same type of man coverage advantage when Clear is guarded by a safety. 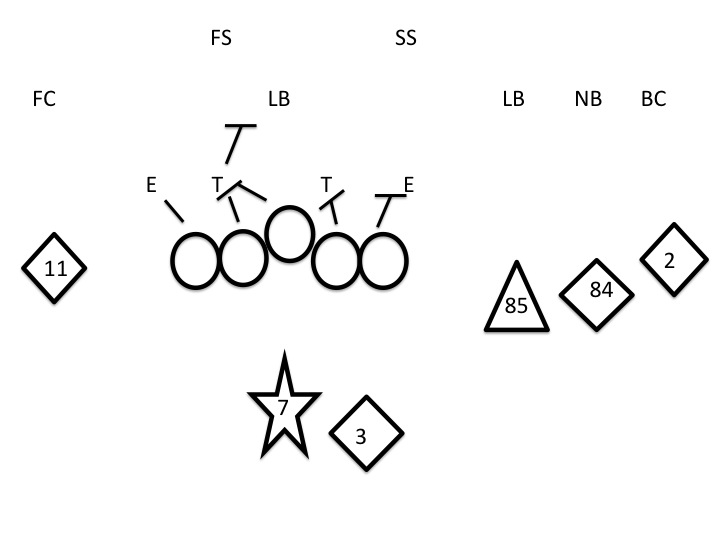 But if the defense chooses to cover Clear with a linebacker instead, now Texas A&M has numbers for a quick running play with 5 offensive lineman left to block 5 defenders in the box. 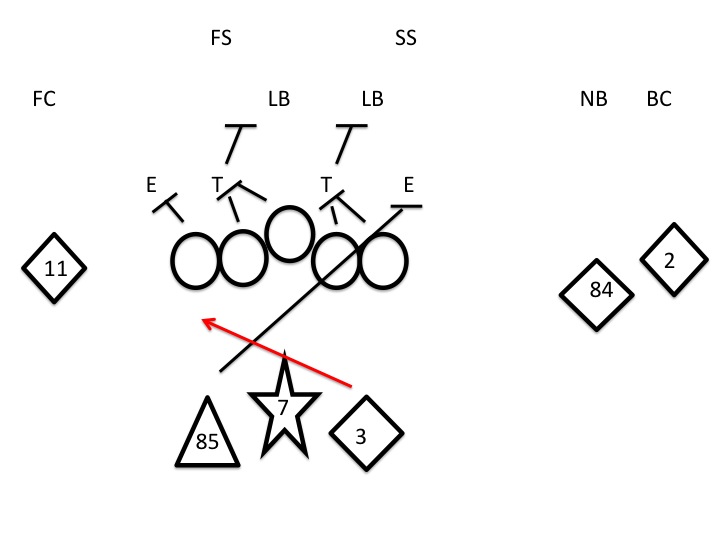 Texas A&M can also put Cam Clear in the backfield. One of Texas A&M's favorite running plays involves this type of misdirection cross in the backfield to try and confuse or misdirect the linebackers. Here Clear is responsible for the backside defensive end. 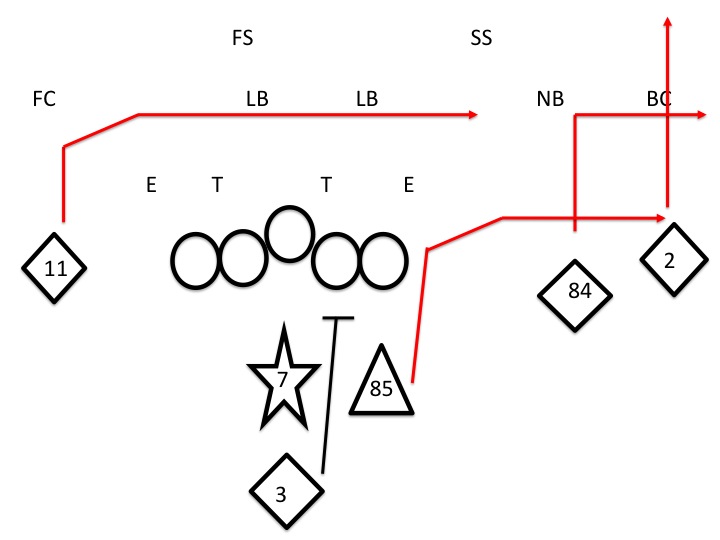 A final possibility could be a pistol formation with Clear in the backfield. Depicted is a play action roll-out that could be used in short yardage situations with receivers running routes at different levels: Clear 1-2 yards past the line of scrimmage, Malcome Kennedy 10-15 yards deep, Josh Reynolds coming across the field 7-9 yards deep, and Speedy Noil running down the field.

Imagine all of these different types of looks a defense might see on one drive without being able to adjust in time thanks to the hurry-up, no huddle. That is exactly the type of pressure Texas A&M would want to put on a opposing team and coaching staff to give them the edge they need.

Thanks to recruiting lights out on the offensive side of the ball, Texas A&M can capably replace Johnny Manziel and maintain the #1 offensive ranking in college football if they increase their pace of play, continue to use packaged plays, and utilize all of their offensive weapons to create mismatches and put opposing defenses in bad situations before the snap of the ball. Aggie fans shouldn't expect to see any type of significant drop off from the offense in 2014 but may notice an evolving identity of the offensive group during the season.