On the heels of the news that DE Gavin Stansbury left Aggie Football, let's preview the Aggies' front seven for 2014.

Share All sharing options for: Previewing the Aggie Defensive Front Seven for 2014

With news surfacing yesterday that starting defensive end Gavin Stansbury left the Texas A&M football program to "attend to personal matters," I thought it might be a good time to review who Texas A&M returns to the defensive front seven in 2014.

Tackles For Loss Per Game: 5.2

Now, let's take a peak at the *official* defensive front seven depth chart from the Chick-fil-A Bowl, minus the players who are no longer with the program heading into 2014. 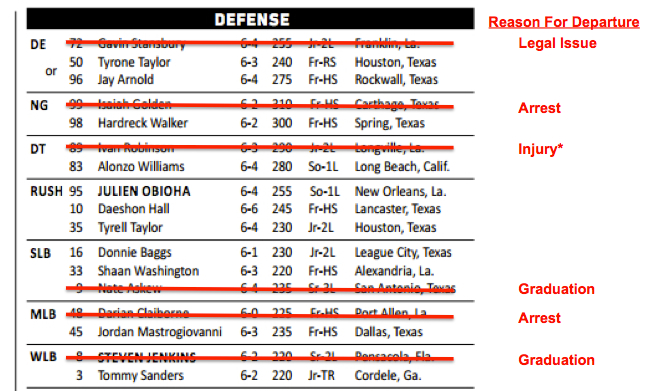 *Note: Ivan Robinson may return to the team if healthy.

Heading into Fall Camp (the first practice is August 1st), we cannot name one starter along the defensive line with any degree of certainty. Gavin Stansbury would have been a clear choice at Strongside Defensive End (SDE), after a solid 2013 season where Stansbury became one of Texas A&M's most consistent players. His performance caught the eye of talent evaluators, as Stansbury was potentially viewed as a day 3 NFL Draft pick in 2015 (4th-7th rounds). The blow of his departure at SDE is softened by the presence of to-be junior Julien Obioha, who will move back to the strongside after playing out-of-position at RUSH end (WDE). Obioha's speed was taken advantage of by several teams last season at WDE, including Auburn who ran a speed-pitch multiple times to Obioha's side. Obioha returns to his true freshman position, where he had a fantastic season with Damontre Moore playing on the opposite side. Joining Obioha at SDE will be Jay Arnold (although Jay may actually play at defensive tackle) and probably Tyrone Taylor. Alonzo Williams, who also played out-of-position last season at defensive tackle, would have made a great SDE contributor, but he has bulked-up this offseason and is reportedly close to 300 pounds, meaning he will stay inside.

At WDE, the expectation is that true freshman Myles Garrett will start. As a player who has yet to take a snap in an A&M uniform even for a practice, we can't necessarily count on that. Daeshon Hall showed flashes of greatness throughout his freshman season, and was sidelined during spring football recovering from offseason surgery. Hall was one of the few players in 2013 to show edge rushing capabilities, making an excellent candidate to start at WDE. If Hall gets the starting nod, Garrett could play at SDE as he is reportedly at 265 pounds after only a couple of months on campus. I actually like this possibility, as both Hall and Garrett could provide the best passing rushing combination, something A&M severely lacked in 2013. I also think we could see Daeshon Hall stand up on the line of scrimmage on the same side as Garrett in certain blitz packages for Mark Snyder on 3rd downs, something that could really frustrate one side of an opponent's pass protection.

We didn't even mention two other freshmen, Qualen Cunningham and Jarrett Johnson, who could contribute in 2014. In all, this group finally has players in their right position and a list of players who could rush the passer.

If there is a group on the Texas A&M roster I have no idea how to predict in 2014, it is the players at defensive tackle.

With three of the most impactful 2013 players at the position gone (Ennis, Golden, Robinson), both defensive tackle positions are completely up for grabs. The nose tackle position seems to be limited to two players: returning sophomore Hardreck Walker and true freshman Zaycoven Henderson. I would expect Walker to start just based on experience, but expect to see plenty of Henderson as the season progresses. I'm not sure this roster has a 3rd true nose guard on it. It would really put the position in a bind if either Walker or Henderson suffered an injury over the course of the season, or either just doesn't play well enough to earn playing time.

At the other defensive tackle position, Alonzo Williams is listed as a returning starter. Williams was another defensive lineman who played out-of-position in 2013, as he was just too light to play inside and should have been playing at SDE. With weight gained in the offseason, Williams could return and be able to stand his ground against the top SEC offensive lines. That will certainly be tested in the season opener against South Carolina. Justin Manning, the top-ranked defensive player in the state of Texas in the 2013 recruiting class, could also be in the mix at this defensive tackle position. Finally, if Ivan Robinson does return to the team after injury, he could resume his starting spot which he left at the end of 2013. Robinson was a saving grace to the position last season after Kirby Ennis suffered a season-ending injury against Arkansas. Robinson, along with Isaiah Golden, helped solidify the group and could do the same in '14.

The talent in this group is there, but they are all sophomore and freshmen players. The position could once again get pushed around by the SEC elite, before turning the corner in 2015.

Even with the loss of freshman sensation Darian Claiborne, I actually like the starters among the linebacker group. The question will be depth behind them. Jordan Mastrogiovanni will not only be the leader of the group, but hopefully the leader of the defense which Texas A&M missed in '13 with the departure of Jonathan Stewart. Mastrogiovanni will call the signals  and line players up for the Aggie defense. That will be a lot of responsibility for a true sophomore. Jordan is another player who has gained weight to take on the middle of an SEC offensive line, and reportedly weighs around 240 pounds coming into the season. Behind him is redshirt freshman Reggie Chevis, who many Aggie fans hope emerges in 2014. Chevis gets fans excited because he walks off the bus looking like a true SEC linebacker. We will have to see if he can play like one.

On the outside, I expect to see TCU transfer A.J. Hilliard at Weakside Linebacker (WILL/WLB) and sophomore Shaan Washington at Strongside Linebacker (SAM/SLB). Hilliard is yet another unknown for us, just because we haven't seen him play in a game due to transfer rules or at a scrimmage like we normally would in the spring, thanks to the Kyle Field construction. Washington played really well as a true freshman in '13 with limited opportunities as he just made plays when we was on the field. Shaan had 4 tackles for loss, 3 sacks, and 1 forced fumble and recovery. His tackles for loss actually ranks 2nd among returning Aggies defenders (5th for 2013 overall). Good things just happen when Washington is seeing playing time. I hope he sees lots of it in 2014.

The question will be who backs both players up on the outside. Donnie Baggs, a senior, could actually be the 4th linebacker among the group, rotating with all 3 starters and playing all 3 positions. Tommy Sanders, who started last year's senior opener against Rice, is also in the mix with A.J. Hilliard to start at WILL. His speed and ability to cover sideline-to-sideline makes him an ideal candidate, and it usually takes a transfer player a full season to get used to their surroundings. Don't count out true freshmen Josh Walker at WILL and Otaro Alaka at SAM.

I'd feel so much better about the linebacker situation if Darian Claiborne was still on the team.  He isn't, and Jordan Mastrogiovanni has to fill his spot and playmaking ability immediately for this group to have a chance. If Mastrogiovanni can become the leader that defensive coordinator Mark Snyder wants, the 2014 defense can improve from week to week. If not, and another rotation among the linebackers occurs as in '13, then Texas A&M will find itself in the bottom of most statistical categories once again.

I don't expect this defense overall to improve that much over 2013. There is just too much inexperience and uncertainty among the group. The good news is that the most of these positions are beginning to be filled with talent from successful 2013 and 2014 signing classes. However, they are all just sophomores, redshirt freshmen, and true freshmen. You shouldn't be expected to perform in the SEC West with a group that young. The best group of players may be at defensive end, with Obioha returning to his true position and two pure talent players in Hall and Garrett looking at significant playing time. That may help the Texas A&M pass defense, but still leaves the rush defense vulnerable. Because I have no idea who emerges at either defensive tackle position, I am not confident that Texas A&M can allow less than 5 yards per rushing attempt in 2014. If I am Steve Spurrier, I am teaching my team just one play for the season opener: run, right up the middle. The game in Columbia may be a real eye-opener for those expecting vast improvement in 2014, and just more of the same for the rest of us.

Plan on serving a lot of crow this year. Hope people like the way it tastes.

Please prove me wrong on this. I will gladly eat crow if it means an improved defense in 2014. I just believe Texas A&M's defense is one year away.