Comparing Aggie Football's Passing Attack to the Rest of the SEC

The Aggie offense, led by Kevin Sumlin and first-year offensive coordinator Jake Spavital, is known as the most dynamic in the Southeastern Conference. How does their passing attack spread the ball around compared to the rest of the SEC?

Share All sharing options for: Comparing Aggie Football's Passing Attack to the Rest of the SEC

Following Johnny Manziel through the NFL Draft process, I noticed several interesting blog posts and Twitter conversations about the read progression in Texas A&M's passing game. I included some of those conversations in my article about Johnny Manziel and the Aggie offense. Essentially, A&M's offense under Manziel looked first to vertical passing routes, and then worked back to routes closer to the line of scrimmage. That sparks an interesting question: Do A&M's 2013 stats reflect that strategy? Does Texas A&M attack deeper down the field compared to other SEC offenses?

Thanks to NFL Draft junkies, finding the answer is fairly easy. Several people spent the time to chart out every throw from draft-eligible SEC quarterbacks, including Johnny Manziel, Zach Mettenberger, AJ McCarron, Aaron Murray, and Connor Shaw. These quarterbacks don't necessarily represent all of the offensive types in the SEC, as 3 of the 5 quarterbacks operated in a pro-style offense. However, these 5 quarterbacks were the best and most experienced in the SEC. It is also impossible to find these stats for any other SEC quarterback, unless you want to chart them yourself.

I am interested in the percentage of passes thrown down the field, over 20 yards. I've broken up passes attempted into the following categories:

I divided by total passes attempted to get a percentage in each category for comparison. These are passing attempts and not completions. My intent is not to compare the accuracy of each SEC QB. It is important to note that for some quarterbacks, these stats do not represent the entire 2013 season. For example, only 269 of Johnny Manziel's total 429 passes in 2013 were charted in this analysis. 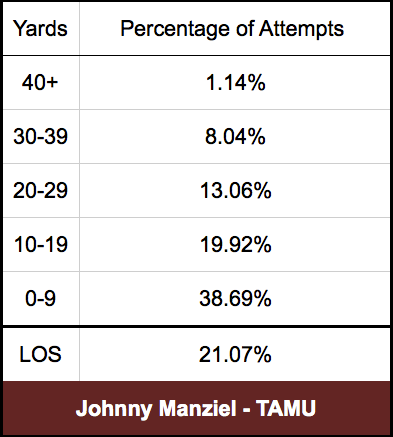 Texas A&M's distribution is fairly heavy at or behind the line of scrimmage compared to the rest of the SEC opponents observed, however the Aggies also throw the ball 20+ yards down the field more than any other team. 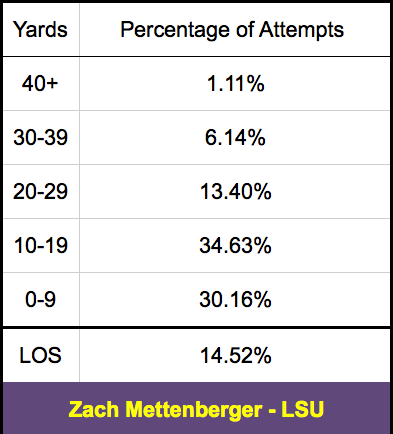 LSU was interesting to look at because offensive coordinator Cam Cameron is an ex-NFL coordinator and head coach. The Tigers also had Jarvis Landry and Odell Beckham Jr. on the outside as wide receivers, so you may expect more throws down the field in their pro-style offense. LSU ranked 2nd behind Texas A&M in passes thrown 20+ yards. They also had the lowest percentage of passes thrown at or behind the line of scrimmage. 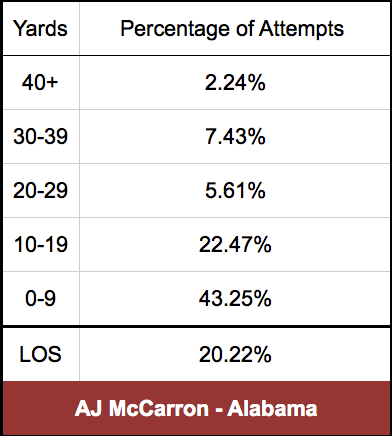 You might be surprised to see AJ McCarron having the highest percentage of passes thrown 40+ yards down the field. This is, in part, due to the low number of pass attempts for Alabama compared to the rest of the teams. A.J. McCarron attempted 336 passes in 2013 compared to Johnny Manziel's 429. 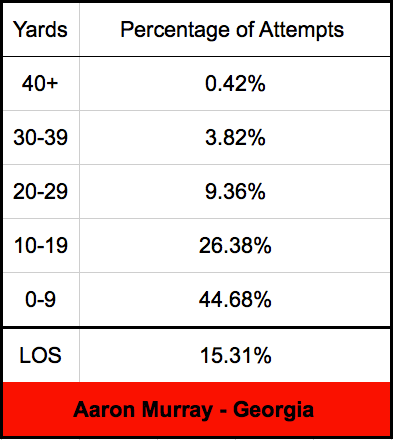 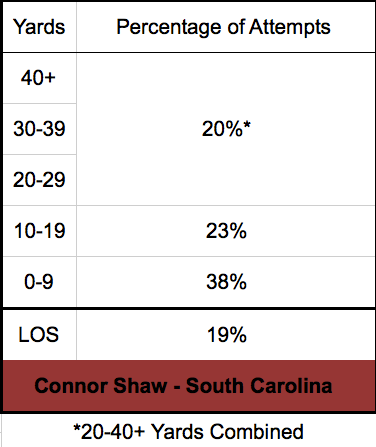 I was compelled to include South Carolina to get a feel for Texas A&M's first opponent for the 2014 season. Surprisingly, this pass distribution is the most similar to the Aggies'.

So how does the Texas A&M passing offense compare to the SEC "average"? 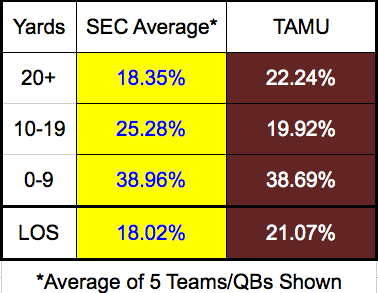 You'll see that Texas A&M throws more passes at or behind the line of scrimmage and more passes of 20+ yards compared to the SEC average. It follows that Texas A&M has the lowest percentage of passes attempted between 10-19 yards. In fact, the next lowest percentage is 22.5%. This may represent the short crossing routes that always appear to be open in the A&M offense and are "built in" to Dana Holgorsen's passing offense (referenced in the Chris Brown - Lance Zierlein discussion).

Since 3 of the 5 offenses examined here resemble pro-style offenses rather than spread passing attacks, how does A&M's offense compare to in-state offensive juggernaut Baylor? 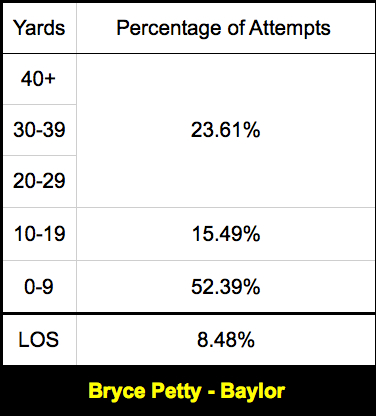 While it seems like Baylor is always attacking down the field, they only throw 1.5% more passes 20+ yards downfield than Texas A&M. It is striking to see that 52% of their passes are thrown between 0-9 yards, creating a highly uneven distribution.

Does Texas A&M attempt more passes deeper down the field than the rest of the SEC? Based on this limited data set, yes. The Aggies' pass distribution can strain a defense with a high concentration of passes attempted around the line of scrimmage and 20+ yards down the field. The defense has to be able to defend both very short and deep. However, other SEC teams like South Carolina also model this type of distribution, proving that the strategy is not unique in the SEC.

A big question remains. How does the pass distribution chart change with a new QB and set of WRs? I'll be charting this over the course of the 2014 season to help answer this question.

Here are some more passing charts from the 2013 season if you are interested in reading more:

Data for this article was gathered from: