If you're an Aggie, an SEC fan, or just have an interest in college football conference dynamics, you'll want to buy this book.

Cutting to the chase: Dr. R. Bowen Loftin's narrative (with Rusty Burson) of Texas A&M's move to the SEC is a must read for any Aggie. More than that, it's a must read for any serious college football fan. Loftin, Texas A&M's 24th President, guided the University from the tumultuous waters of the Big XII to the shining seas of the SEC. And in The 100 Year Decision, he tells his tale of the journey from his view at the helm.

The seemingly diminutive, bow tie wearing physicist put pieces in motion that reshaped the landscape of college athletics. His decisions in College Station ultimately led to the expansion of the SEC and ACC, the halting of PAC expansion, the further erosion of the Big XII, and the eventual death of the Big East. 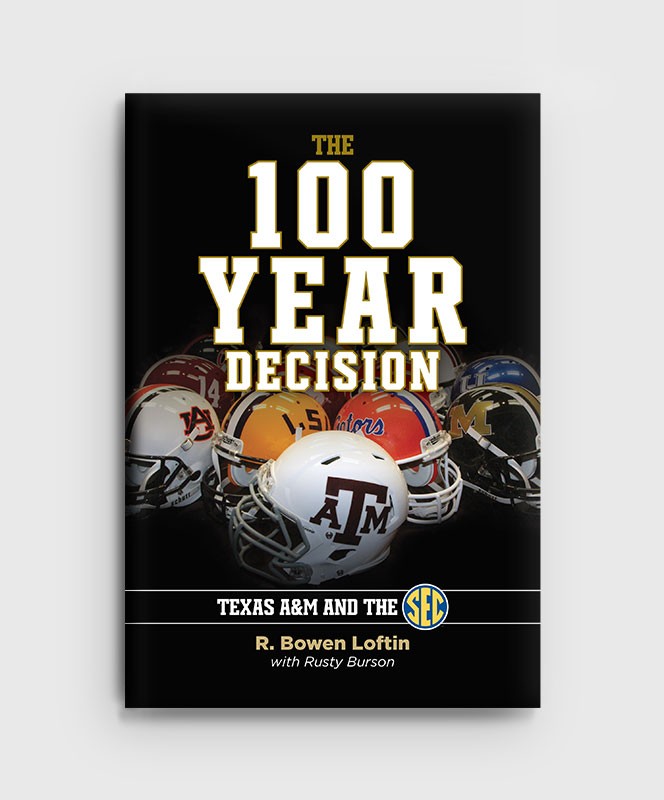 The arc of the book is complete. Loftin frames the events within the context of his own biography, sharing his upbringing, education, professional background, and ultimately, how he came to reside in the President's home on the campus of Texas A&M. He also tells of the memorable 1967 season during his freshman year at A&M, when Gene Stallings' Aggies miraculously won the SWC and defeated Bear Bryant's Crimson Tide in the 1968 Cotton Bowl. While he subsequently focused on his career as an academic, the events of that season made an important impression in Loftin's mind: Athletics, particularly football, have a tremendous impact on a college campus.

Fast forwarding, the book provides essential background to the issue of realignment, touching on the landmark Supreme Court case that empowered Universities to own their broadcast rights, the demise of the Southwest Conference, and the arranged marriage that was the Big XII, complete with former Texas Lt. Governor Bob Bullock assuming the role of officiant.

With no real background in athletics, however, Loftin was baptized by fire early on in his tenure, tossed into Big XII Conference meetings with little time to fully study the complex issues involved. It quickly became clear to Loftin that the Big XII was not a stable organization under feckless former Commissioner Dan Beebe, with outsized influence afforded to Texas.

The account of the events of June 2010 is riveting. Nebraska and Colorado's departure from the Big XII and the near-formation of the PAC-16 are described in page-turning fashion. It's here where Loftin starts to tune his appraisals of major players like Beebe (weak and reactionary), Texas President Bill Powers (condescending and less-than-forthcoming), PAC Commissioner Larry Scott (bright and visionary), SEC Commissioner Mike Slive (thoughtful and meticulous), and Texas A&M Director of Athletics Bill Byrne (complacent and unmotivated).

Faced with a critical decision, Loftin's background as a scientist shines. Candidly, Loftin shares with readers his spreadsheet objectively evaluating the Big XII, SEC, and PAC options. The inclusion of that historical artifact is practically worth the book's purchase price alone. It's at this moment in the story that it starts to become clear to Loftin that the SEC is where Texas A&M belongs. But Loftin admits that in 2010 the timing wasn't right. That's largely because Texas, through media functionaries like Chip Brown, controlled the narrative in the press. A&M was left in a reactionary position where it stood to be cast as the villain in the breakup of the Big XII. Loftin would not let that happen a second time.

As the rest of 2010 and the first half of 2011 transpired, Loftin writes of his increasing uneasiness with the Big XII and further belief in the SEC. Of interest is a key conversation with Mike Slive in a luxury suite at the 2011 Cotton Bowl. With Texas unrolling their increasingly expansive intentions for the Longhorn Network and Beebe little more than a rubber stamp for burnt orange wishes, Texas Aggies became unified behind not just a desire, but a need to depart the Big XII for the SEC. Loftin was ready to act in the best interests of Texas A&M.

Like the June of 2010 events, Loftin's recounting of the time frame from July 2011 through A&M's acceptance into the SEC is captivating. Loftin masterfully closed ranks and stayed ahead of the story in the press, and he doesn't hesitate to heap praise on then A&M VP (and now A&M Associate AD) Jason Cook's message management strategies and execution. His frustrations are also revealed, particularly in regard to a last-minute departure roadblock thrown up by litigious Baylor President Ken Starr. After overcoming the legal hurdles, readers join Loftin in the joyous, victorious moment when he learns that A&M has an unconditional invitation to join the SEC.

Yet the story doesn't stop there. Loftin also gives his assessment of the maddening 2011 Aggie Football campaign, including the difficult decision to fire former Head Coach Mike Sherman (where Loftin's analytical mind is once again evident) and the hiring of current Head Coach Kevin Sumlin. He explains his increasing disappointment with Bill Byrne and his decision to buy out Byrne's contract and replace him with South Carolina AD Eric Hyman.

The book's closing leg is largely comprised of the 2012 Aggie Football season, those momentous months highlighted by a win in Tuscaloosa and capped by Johnny Manziel's Heisman Trophy and the Cotton Bowl triumph over Oklahoma. The narrative reaches its denouement with the up-and-down 2013 Aggie Football season paired with Loftin's bittersweet departure for fellow SEC (and former Big XII) member institution Mizzou. But the closing note struck is unquestionably an optimistic vision of the future for A&M in the SEC.

Throughout, Loftin's unique personality and leadership style shine through the pages: Determined and incisively brilliant, yet warm and humorous. Seemingly boring aspects like broadcast rights agreements and conference exit fees are made both interesting and digestible. Altogether, the style and delivery make for an incredibly brisk read that can comfortably be consumed over the course of a long afternoon or evening.

If the book has any shortcomings, they lie in two areas, and both are somewhat nitpicky. The first is a handful of points where Loftin softens blows or leaves potentially juicy stories untold, such as details of a meeting early in Loftin's tenure with former AD Bill Byrne where Loftin asserted his authority and established a clear chain of command. The second is in latter chapters, where the book strays from the insider's perspective and devolves occasionally into the more blasé play-by-play of great moments from the Aggies' 2012 season. To readers accustomed to devouring the previously untold stories, it feels a bit like filler, albeit tasty filler.

Nevertheless, the overall work is outstanding and you'd be making a mistake if you don't have a dog-eared copy on your bookshelf by the end of the year.

The 100 Year Decision is available in hardback later this month from Aggieland Outfitters and you can pre-order it here.

Editor's note: Aggieland Outfitters sponsors certain features on Good Bull Hunting, but this is not one of them. Doug is not a beneficiary of those sponsorships and was asked to provide a candid review of the book.