Will your provider carry SEC Network?

Updates on distribution and coverage for the SEC Network launching on August 14th.

Share All sharing options for: Will your provider carry SEC Network?

Happy August! We're officially inside of two weeks from the SEC Network's launch on August 14th. More importantly, we're less than one month away from kick-off for Texas A&M vs. South Carolina on the SEC Network.

Updates (we have updated this article to reflect recent agreements)

August 2: Suddenlink inked a deal to carry the SEC Network. 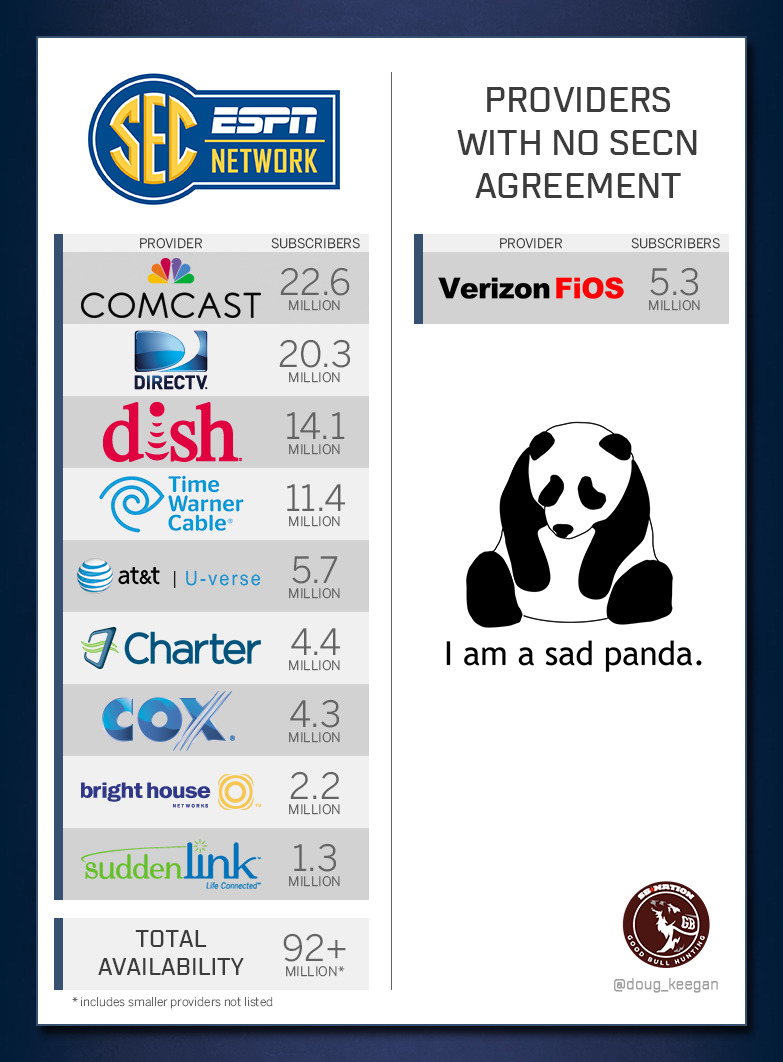 As you can see, ESPN and the SEC's joint campaign to establish distribution agreements has most major providers on board. This is great news for many of you, but there is still one significant holdout: Verizon FiOS.

I've got a minor provider that's not listed. What about me?

Check this page and drill down under the question "How can I get the SEC Network in time for the August 2014 launch?"  More than sixty smaller providers with SEC Network carriage agreements are listed.

Hey that fancy graphic isn't right. I saw a [tweet/article] that Verizon was going to carry it! What gives?

The major carriers listed are the only ones with confirmed deals announced by ESPN and the SEC. Tweets and articles are not official press releases, and when 5pm rolls around on August 28th, waving a tweet or article that cites "sources" in front of your TV is not going to make SEC football magically appear. Providers love leaking information that a deal is "close" in order to keep customers on board.

Remember, a deal isn't done until ESPN and the SEC say it's done.

I called my provider and the polite representative I spoke with said a deal was close! They said they'd have it! What about that?

See answer to previous question. Phone representatives are trained to calm your concerns and retain you as a customer. They're oftentimes also trained to offer you incentives to not discontinue your service. These incentives may lock you into contract extensions that can be expensive to break. If you're thinking about switching, be very careful in accepting free movie channels, sports packages, or bill discounts.

Ok, it's August. I'm tired of the BS and want to sleep easy knowing I'll have SEC Network. What can I do if I do want to switch?