Several Good Bull Hunting authors were in attendance at the Kyle Field opener this year and reviewed the hell outta it.

It's a brand new Kyle Field! Is it better, worse, grandiose or disappointing? We had a crack team of authors at the game to give you reviews of the new Hate Barn. Move over Yelp, this analysis will slice right into the massive concrete heart and soul of the Home of the 12th Man. We'll see how the experience stacked up to the stringent standards set by this collectively refined audience.

We had folks sitting all over the building, including the fancy places. Here's where the critiques and praises are coming from, for later reference.

Do you like loud noises? 'Splosions and fireworks? Or do you just want to hear the play being called? Here's what you're gonna hear.

gigthem08: Could not understand what was said. We could hear noise, but it was muffled and distant.

(Sort of like listening to an Aggie radio broadcast with Dave South...got it)

Spadilly: Sound was pretty rough all night and especially for the pre-recorded Bugle Call.

JA Clark: Sound was fine for me. I know there were serious problems last year in parts of 2nd deck that are under the 3rd where you can't hear anything. But I was out in the open for this game and it was fine. Had problems hearing the Aggie Band, missed half of the War Hymn at one point.

Derek: Team intro was good, PA was good, audio on all pre-packaged video segments was barely audible, if at all.

Fletcher: The sound was terrible. I believe most of the speakers were out. It was extremely muffled and unintelligible.

Doug: Audio was unintelligible. Very garbled and excessive bass. Speakers seemed to be cutting out at times.

rcb05: Terrible. All Audio was either garbled or not loud enough to hear.

oscarwildecat: Couldn't hear anything all night. It was pretty great.

We all know Kyle Field has the finest dining in town, but what were the lines like? Probably really short with efficient service and...what...

gigthem08: No issues at all in the lower zone. I only had one quick order (the traditional sobering large Gatorade) but the lines were moving very quickly.

Spadilly: Didn't go to concessions. Had my fill at tailgates.

JA Clark: I was the only person in line, they had some problems getting that sorted. I could see if there had been more people, they would have been struggling.

Derek: Same terrible concessions service as last season. Nothing was different at all despite reassurances from the AD that it was a high priority. There are tons of little rolling vendor stations for water and soda, but including last season, I've never seen a single one in the south end zone open.

Fletcher: Concessions were slow even in the Club area. Options were also much more limited than in previous years. The new Lettermen's Lounge is impeccable however. There is a full open bar prior to the game.

Doug: Service was awful. Workers had no clue how to conduct a transaction or fill an order. Lines were very long and unacceptable for the Club Seating area.

rcb05: Selection was fine, but lines took forever, 20-30 minutes even on the club level.

oscarwildecat: Plenty of bartenders and places to grab drinks in Legacy Club, but food lines were ridiculously bad.

We dropped half a billion bucks to remake the harsh, minimalist, imposing tackle box that was Old Kyle Field. How's it feel now?

Spadilly: Beautiful. From the plaza outside, to the brick arches, I loved it all.

JA Clark: Looks awesome. Walked around the stadium and took a look around the new section. The improvements on the student concourse are great especially with the better air flow that helps you cool down.

Derek: Kyle Field is without a doubt one of the most beautiful stadiums in the country. Populous may not be very good at crowd flow design, but they sure as heck can make stuff look pretty.

Fletcher: The stadium looks incredible, but I can't help but feel some of the enhancements were made strictly for the reason of being able to say we did them. Some of the stadium is over designed/detailed. Similar to the "12 empty seats" idea, a lot of the stadium feels like someone had a random idea and somehow convinced the design company it needed to be incorporated. I also realize it takes a lot to pay for a $450MM stadium, but there is almost nothing in that place  that isn't sponsored. "Sidewalk brought to you by Wells Fargo", "Ticket Scanners sponsored by Budweiser", "Here's a statue of the greatest player ever to play here, sponsored by Advocare", etc. A&M didn't seem willing to use a dime of their own money on this place, but hell yeah, they are going to pocket everything made from it and market the hell out of it.

rcb05: Probably the nicest looking college stadium in the country, inside and out. So yeah, that's pretty great.

oscarwildecat: Fantastic, but my high-maintained request is for whoever is running the TVs needs to switch to good games, and not allow giant screens to watch CSI: Miami for two hours.

gigthem08: The stadium feels corporate and cold at times. The fans can help overshadow that a great deal, but there isn't a square inch of that building that isn't for sale.

Spadilly: Solid B+. Tailgating seemed to be a bit smaller than I expected, but I assume that was due to Ball State not bringing many people. Inside Kyle, it was great for a non-conference game.

JA Clark: It was loud. It wasn't the loudest I have ever heard Kyle Field, but I think it was loud for the amount of effort the students were putting in. I really like the class of 2016. They are making good leaders in keeping everyone on track with what the 12th Man needs to be doing.

Derek: I was impressed with the atmosphere for a subpar opponent. The 12th Man was definitely jonesing for the Aggies to be back in Kyle Filed. Of course the game got out of hand early, so it calmed down very quickly.

Fletcher: Atmosphere was good for a cupcake, Impressive they got 104,000 in attendance for Ball State. Looking forward to hearing it for Bama or for another important game. They have made the atmosphere less personal that old Kyle though. Instead of feeling like a hallowed ground for all Aggies like it used to, it feels very manufactured now and it makes the statement: "We built the best stadium in the country. We allow you to come see it, but not be a part of it." I feel just as connected to this Kyle as I do seeing the Aggies play in Cowboy's Stadium. Impressive, but all for show.

Doug: The Club seats were great, glad to be away from the peasants and rift-raft below.

rcb05: It definitely felt louder thanks to the enclosed stadium, even for a cupcake opponent. While there are a lot of sponsored video board segments, that's nothing new.

oscarwildecat: Maybe it was the lack of sound, or too much time spent in Jerryworld, but I was actually somewhat impressed with the lack of corporate shill-way less videos hawking crap than I feared. Liked when the big screen showed live in-game updates, that was awesome.

Basically, were you sitting directly behind a stray pillar or something the builders messed up on?

gigthem08: View was fine; line of sight has never been an issue where I have been sitting in the lower zone.

Spadilly: We were on row 22 and still could not see the back of the end zone from our seats. I though this would be fixed since they moved the field south, but it wasn't a big deal. We had problems getting to our seats using the northwest escalators. There were hundreds of people having to pass one by one through a small entry to get to their seats.

JA Clark: Yeah, best seats in the house with a perfect view right on the 50 yard line. No complaints. However, there were students I met that had pulled tickets on senior day and were assigned seats with numbers like "301" when there are only 32 seats per row. They didn't know where to stand, so they were in the aisle.

Derek: No issues with line of sight. I really like where my seats are and the view. Being a giant, the extra leg room in the south end zone is also nice to have.

Fletcher: The view from the Zone is great. Full view of he field and the jumbotron.

Doug: Marvelous, could hardly see the poors from the chamber of wealth I viewed the game from.

rcb05: Sight lines on the new west side were fantastic. Second level feels right on top of the field, and the seats are angled towards the middle of the field.

oscarwildecat: View was ridiculous. I hope I get invited back post-Jack & Pepsis.

gigthem08: The signal was improved late in the game. Whether that was a function of the stands emptying or an actual signal fix, who knows.

Spadilly: Wi-Fi was awesome. We had a box right between our legs and could stream every WatchESPN game with no problem. Every text we sent went though right away.

JA Clark: Abysmal. I usually don't have a problem sending MMS or using my mobile data in Kyle. This game it showed I had service, but I couldn't do anything with it. The Wi-Fi didn't work at all. The signal strength was so weak and kept disconnecting anyway. Got great service in the concourse though. It was the same for the people around me. When I moved around the stadium, I had no issues. So maybe there's something wrong in my section.

Derek: Got to our seats with about 10 minutes left until kickoff and none of my group was able to connect to the Wi-Fi. Cell service was better than last season, but that's not saying a lot. We had a mix of phones on Verizon, AT&T and Sprint. It seemed like the ranking of best to worst service would be in that order as well. Data speeds were still very slow, but texts would at least go through. So, better that last season, but definitely nowhere near all the hype and praise the AD and Populous showered on it all offseason.

Fletcher: Wi-Fi worked incredible for me. I was able to tweet, text, and stream other games in HD on WatchESPN. My parents have seats in the north end zone, first deck and they said a guy was running around in the 3rd quarter testing the Wi-Fi, so many he was trying to fix some of the connectivity issues others were having.

Doug: Wi-Fi was excellent. That was a shining bright spot of the experience.

rcb05: Wi-Fi was fantastic. Tweeted/texted with ease and others around me were streaming WatchESPN throughout the game.

oscarwildecat: Wi-Fi was perfect from the start. I got to stream highlights of Malik Zaire's ankle, etc. 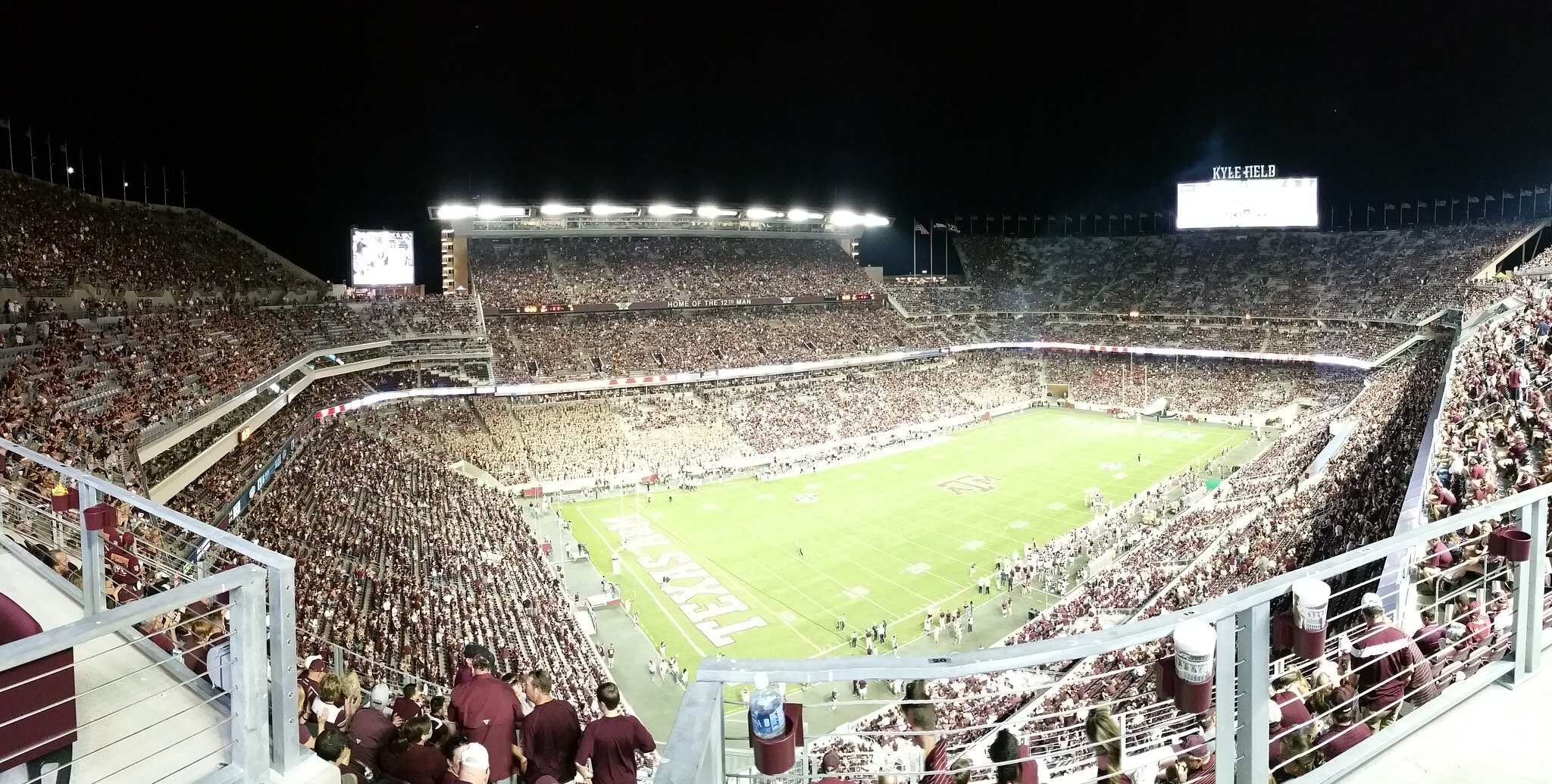 Overall, we all had a good time and we were impressed with the new stadium, critiques and all. It should be something you can be proud of for years to come.

What was your experience at the game?