HITCHHIKER'S GUIDE TO DALLAS - FORT WORTH

Dallas is a rich man with a death wish in his eyes
A steel and concrete soul, and a warm-hearted lover's disguise
A rich man who tends to believe his own lies

Share All sharing options for: HITCHHIKER'S GUIDE TO DALLAS - FORT WORTH

This weekend the Fightin' Texas Aggies take on the Razorbacks of Arkansas at Jerryworld. Good Bull Hunting has decided to commemorate this latest match up with one of our world famous welcome guides to introduce our visitors to the wonderful DFW metroplex. Yes, this is the fifth time in seven years that these teams have met in DFW, but we Texans have spent most of that time childproofing Sudafed products and posting "No Bathing" signs along the Trinity river after those first few visits from the Razorback faithful.

So head on down to Big D and Cowtown for the weekend! We'll all gather outside of the largest middle finger in football as we offer Jerry Jones sexual favors in return for tickets to his own personal football mausoleum. Nothing captures the passion, tradition, and pageantry of college football quite like forcing fans to pay over $150 per ticket to come pay $10 per beer while they watch TV. The Arkansas fans will even be in their underpants to complete the experience.

But which town? Doesn't matter! They are both excellent places to visit to grow fonder and fonder of living anywhere else on earth!

Dallasites and Fort... Worthians (?) are quick to tell you how they are not like the other. And they are different, you see, however the difference is only detectable by those who gauge their self-worth by parsing the minutiae of suburban living. DFW is a pair of obnoxious cities separated/joined by a festering, sprawling knot of arbitrarily-oriented highways and suburban hellscape.

But we kid! They are really both quite unique and full of whatever culture they have chosen to forcibly adopt, like a college freshman who just discovered dubstep.

Ah Dallas, where plastic people buy fake plastic boobs and put it all on the plastic. Dallas is a leased BMW, all pretty and shiny and nouveau riche but destined to leave you broke with nothing to show for it other than a two year relationship with a vapid pharmaceuticals sales rep. Whether it's the Snootingtons of Highland Park, the bros of SMU, the yuppies of uptown, the aging yuppies of the M streets, or the high octane douchebags downtown, Dallas is sure to provide whatever brand of unbearable personality you seek. And if you think that Dallas is nothing but the rich and fake rich assholes north of I-30, don't worry because the hipsters have been hard at work gentrifying south Dallas, replacing affordable property values for minorities within the city with bikram yoga studios and yerba mate shops.

Should you find yourself cruising around the north side of town, be sure to avoid 635. Due to an ambitious and possibly meth-induced construction project LBJ currently resembles the trench run on the Death Star. While that poses some traffic difficulties for visitors, it's no big deal for the locals who used to bullseye womp rats in their Infiniti QX80 when they were kids.

Don't be fooled into thinking that downtown isn't without its traffic issues as well, with Woodall Rodgers freeway often being backed up for its entire length. But rather than solve the downtown traffic issues, Dallas chose to remove them from sight by building a park on top of the freeway.

In Dallas your pig gets the best lipstick money can buy.

Denizens of Arkansas will certainly feel more at home in Fort Worth, one of the last places on earth where having an account manager dress like a cowboy on the weekends is considered normal and not cosplay. If The Three Amigos were a city, they would be Fort Worth. If you are feeling touristy take a drive through the famous Stockyards, the Superbowl of 4H except instead of money and fans and adulation there's just manure. The cows still run through Fort Worth every day because why be an efficient city when you can further Texas stereotypes.

Honestly, Fort Worth seems like a pretty cool place, but something must be wrong with it if even the people in Euless claim Dallas.

Eventually you will be forced to navigate the purgatory between the two cities. You might be in Hurst, Euless, Bedford, Irving, Coppell, Grapevine, Grand Prarie, Southlake, Colleyville, Kennedale... the point is that it really doesn't fucking matter. Feel free to stop at any of them, buy a 2400 square foot home with stainless steel appliances and granite countertops, have 3 children, and watch your life slip away. Life is what happens to other people after you disappeared into the DFW mid-cities.

For the game you'll be spending your time in Arlington, or as it's known around here "Dallas' toy box." This is where the cities put all of their entertainment so that they don't accidentally become "fun" or "like an actual city." In DFW, everyone must arrive at their sporting events after no fewer than 45 minutes of ass whipping in traffic on Tom Landry Armageddon Highway. Mad Max Fury Road is a documentary about people engaging in their daily commute on I-30.

Arlington was designed by three 10 year-olds after a case of Jolt Cola using Sim City in 1994. Chain restaurants, roller coasters, water slides, baseball, and a fucking space ship where football is played. It is the one suburb to rule them all. Your move, Anaheim.

PRO TIP: Want to enjoy the twisty turny roller coasters and waterslides of Arlington, but your travel schedule is too tight? No problem, just take two quaadludes with a Chili's Too margarita and then try to navigate your way out of DFW International Airport in a rental car with the seat stuck all the way forward.

Dallas is the home of the world headquarters of most of the terrible chain restaurants you hate. This town birthed Chili's and Dave & Busters and there is nothing you can say about its cuisine to hurt it because it's already dead inside.

There are blips of life, but you gotta look hard to find them. Once the heart of a prolific music scene, Deep Ellum is now an animated corpse being forced to shamble along and depress people as much as entertain. But deep in its bowels is Pecan Lodge BBQ, where you can enjoy some delicious meat candy.

For Tex-Mex try Matito's in uptown. Ask for the Bob Armstrong dip.

If you're looking for BBQ in Cowtown, Cooper's will do you right. Get in there and get some brisket, jalapeno sausage, beef ribs, pork ribs, the big damn pork chop, and a Shiner Bock. Don't forget your heart pills. And if you tell 'em Wes sent you, nobody will care.

While in Fort Worth be sure to stop by the legendary Joe T. Garcia's and try what qualifies for great fajitas to people who have never been to San Antonio. It's a giant maze of 3 buildings and 100 patios where they serve two dishes that are so mediocre they made Dennis Franchione say "meh." Oh, you can also buy their salsa and take it home if you'd rather throw it away there.

If you want Mexican food in Fort Worth, get your ass to Benitos on Magnolia Street and go heavy on the Queso Blanco. 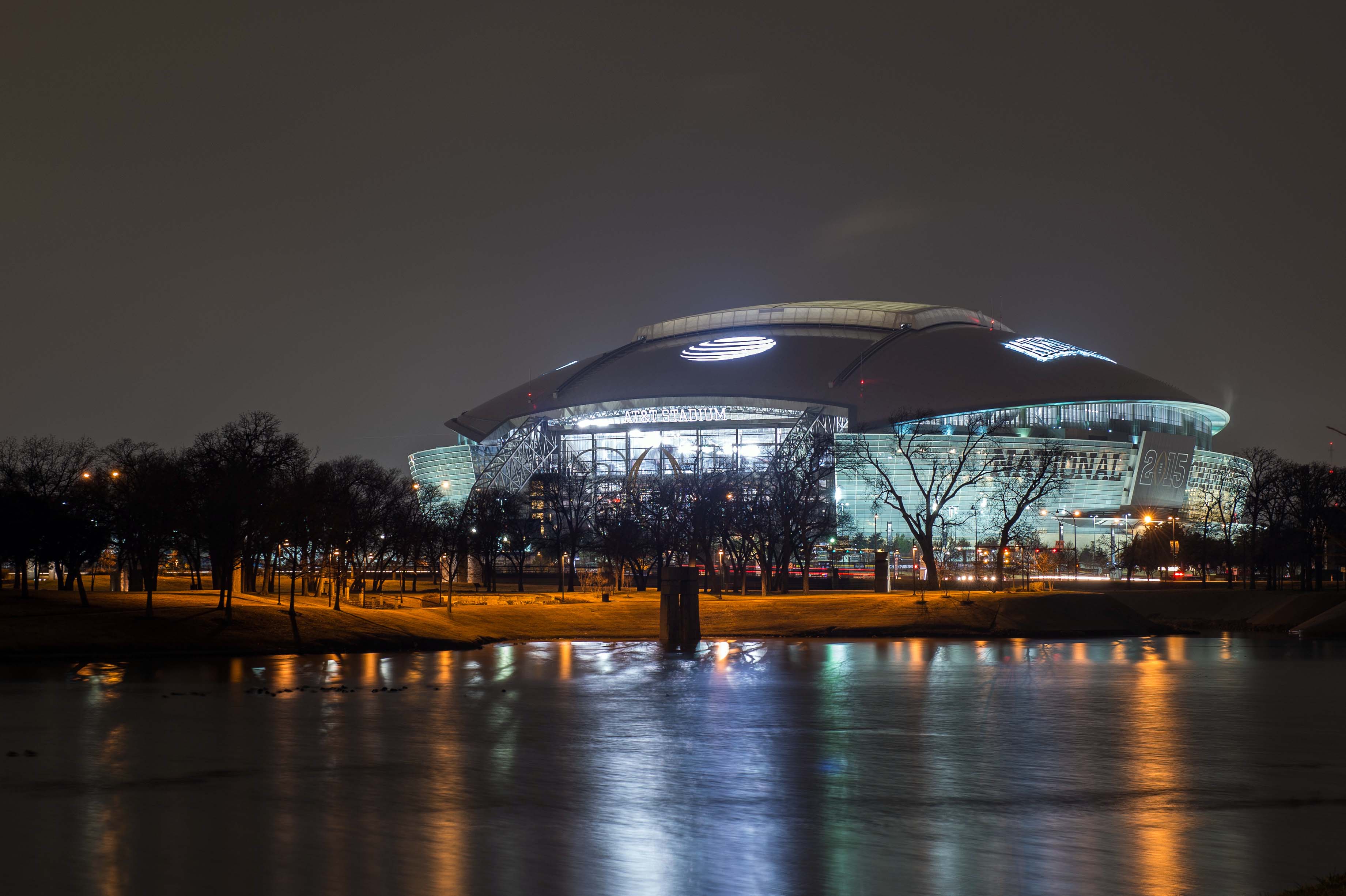 Arkansas may lose the battle on Saturday, but they won the war against north Texas before you were even born.

You are now ready to conquer DFW! Fill up on salted animals, get loaded on Lone Star, get your hawk as faux as you dare, hook your belt buckle up to the satellite receiver, and watch some damn football!

And if you take a shit, remember to flush twice. There's a drought and Houston needs the water.