Share All sharing options for: The Upside Downside: Texas A&M vs. Arkansas

For a minute there it was, that same game that you've seen the Aggies play 100 times before - mostly in the 2000s. They were outsized, outmatched, and sometimes it seemed like they were even outcoached.

This is Coach Sumlin's team, and Coach Sumlin's team has bought in 100% on what he can do and how he can lead them to success. Now you just sit right there and let them drag you through hell before they take you to heaven. At least you can have a smile on your face while you explain that fist-shaped hole in the wall to your girlfriend.

This game was frustrating for everyone including the players. Dropped passes, bonehead penalties, missed assignments, and just a plain lack of fat guys hurt the Aggies at every turn. But every game has its successes, and every game has its lessons to be learned. Here's a few things that we can take away from the hog hunt in Jerryworld. 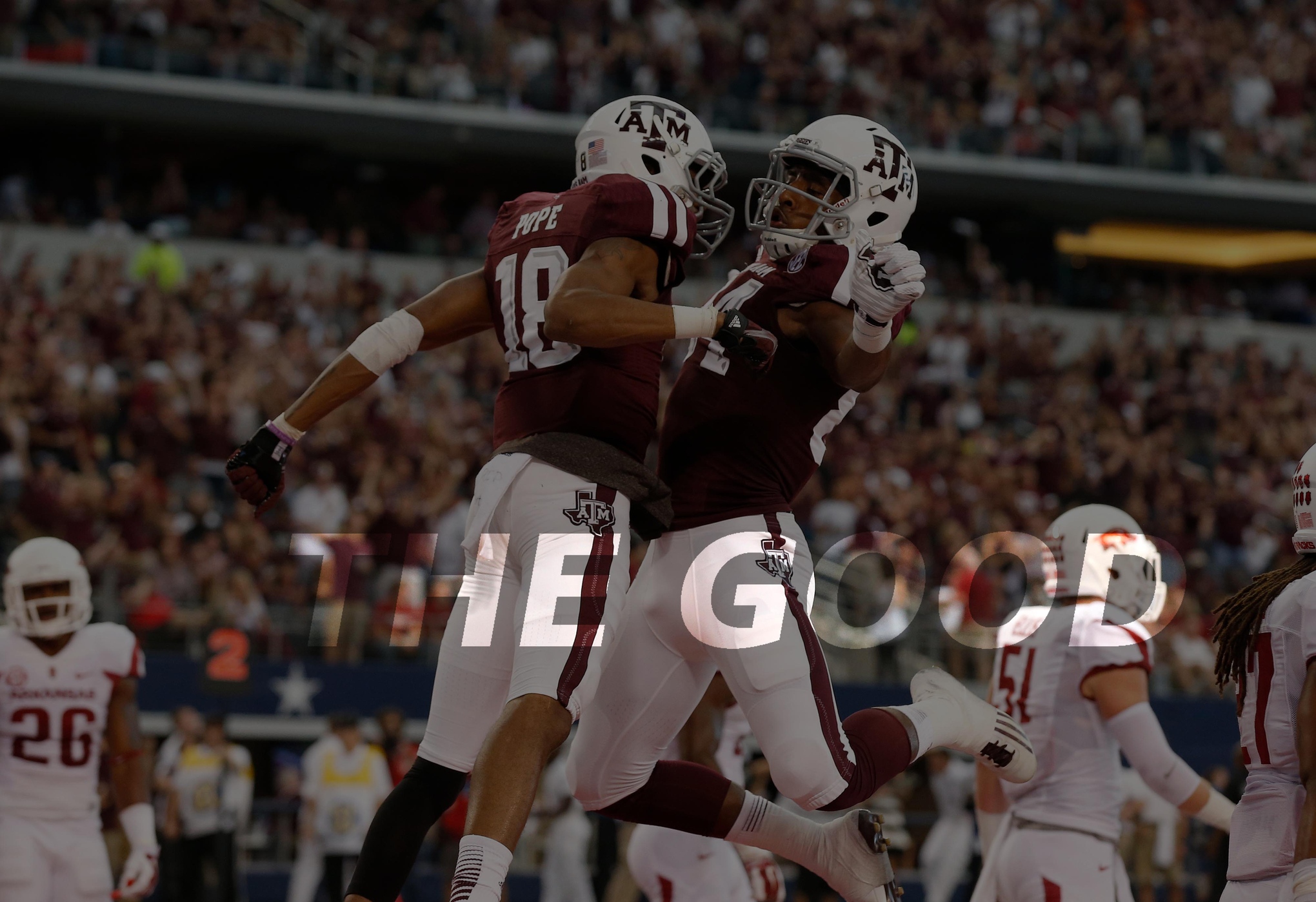 In a switch from the accepted way things run under Kevin Sumlin, on Saturday the Aggie offense struggled to get into any rhythm and the defense was asked over and over again to bear the burden. However, as we saw in the Chick-fil-A Bowl against Duke, this team is never down and out because of the ability to strike fast for huge yardage. Wide receiver Malcome Kennedy summed it up best:

We knew we can explode just like that. Gasoline to the fire. … We’ve been doing it for three years.

This guy gets it. That's a badass statement about the explosiveness of this team, and yet it's also just the word "dumpster" short of how the offense looked for large chunks of the game.

As usual the return teams did solid work continually giving the offense decent field position, though the fans are pretty thirsty for a blazing Noil return that doesn't involve holding penalties. Lambo's missed field goal was disappointing, but he has been nails on PATs and there was a time in recent memory when that wasn't true of our kicker. Most importantly, thanks to the offense's struggles, Heisman front-runner Drew Kaser was able to show off his leg with 6 punts averaging over 40 yards.

This was the Aggies' first venture into overtime under Coach Sumlin, and we can safely say that it could not have gone better. When faced with college overtime, the best possible scenario is to score a touchdown on the first play and then shut the opposing team down in four downs without allowing 10 yards. Earlier struggles aside, Kenny Hill had the hot hand, Snyder's defense dialed up a top notch performance when they needed it most, and Aggie fans' livers answered the call of duty once again. Now the Aggies can walk into any matchup knowing that if the game is on the line at clutch time, they know how to close the deal. 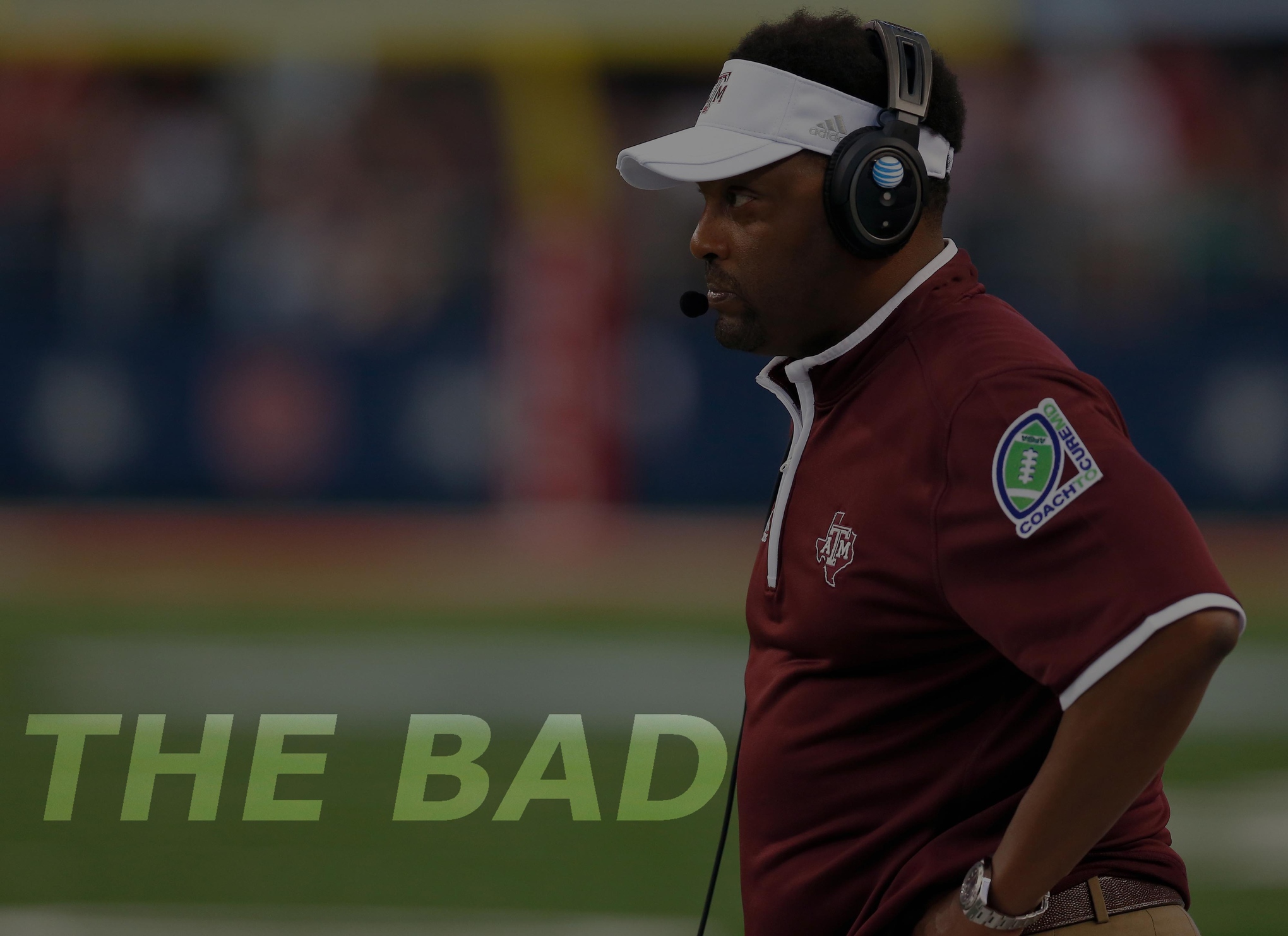 Coach Terry Joseph has had his work cut out for him with A&M's secondary, and for the most part there has already been a considerable improvement in fundamentals and awareness. However, as the Aggie defense was forced time and time again to stuff the box in order to sell out on Arkansas' considerable rushing attack, A&M's safeties frequently bit hard on play action with disastrous results.

This is a unit that is trending in the right direction, but advanced play recognition will be critical as Gus Malzahn introduces complex misdirection and Les Miles initiates his cats-riding-Weimaraners formation.

That fake punt.  The only thing more frustrating than watching an ambidextrous Australian punter streak by our coverage team was the fact that the announcers JUST TALKED ABOUT HOW READY A&M WAS FOR THE FAKE PUNT. Verne Lundquist was more prepared to make that tackle than our four players who were blocked by two Arkansas linemen. We can only hope that in the future, the special teams unit is more prepared for the things for which they are already prepared.

Oh, and we missed a field goal. But sonofabitch that fake punt.

Yes, there were a lot of flags flying for both sides. And yes Arkansas shot themselves in their good tripping foot in ways that helped the good guys walk away with the W. But thanks to the 9 penalties for 70 yards on Saturday, Texas A&M now trails only Florida and Ole Miss as the most penalized team in the SEC with an average of 64.6 yards per game.

In A&M's defense, sometimes when your safety has been scorched beyond recognition, the smart thing to do is just hold onto that receiver like he thinks you should see other people. In these instances it is perfectly appropriate to employ the use of flashbangs, bolas, or a Vaudevillian cane to impede the receiver's progress.