Aggies in the NFL: Week 3

Share All sharing options for: Aggies in the NFL: Week 3

With another non-conference patsy seriously three in a row is kinda lame valuable coaching experience in the books, we turn our eyes to the NFL to check on our Aggie pros.

Here, let me set the scene

* There is no official NFL penalty for being the Browns. A receiver wasn't set when the ball was snapped.

Cyrus put the Chiefs victory over Miami on ice with a late six-yard TD run. And to celebrate his first NFL non-preseason TD... he danced. Oh, did he dance.

"The dance, I actually stole it from my brother Von Miller. I stole it and it worked for me."

We had some Aggie-on-Aggie crime this week when DaMontre flew around the edge to block Shane Lechler's 4th quarter effort at Giants stadium. Giants fans have been waiting for him to make the leap in year 2, and hopefully this can vault him towards some legitimate production on the defensive side of the ball. 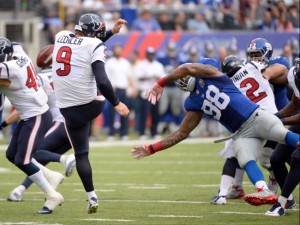 Von continues to NGAF about the NFL's desire to not have fun playing this sport, and it is delightful. Seattle ultimately prevailed, but Von appears to be back in "weekly sack" form.

Yawn. Another week, another huge game for Money B. Pencil him in for 50-80 yards and at least one touchdown until further notice.

Y'all, the things I hear out of Atlanta are amazing. It's not "we nailed this draft pick, and we're glad he's contributing immediately" and it's not even "wow, he's completely stabilized the offensive line as a rookie." It's a hushed, almost disbelieving "we have a franchise left tackle for the next fifteen years." As if there's this unspoken fear that if they say it too loudly someone else will hear it and it won't be real.

Just look at this. He drives his man into the endzone on a play that started from the twenty yard line.