Aggies in the NFL: Week 2

Share All sharing options for: Aggies in the NFL: Week 2

Week 2 of the NFL regular season is in the books. The Ags weren't quite as prevalent this go around, but there were still a few performances of note.

Johnny! He got in the game! He got into a real NFL regular season game and took a snap! Three snaps!

Randy had a well-documented rough start to his Texans' career last season, but since then he very quietly hit sixteen straight field goals before his fourth quarter effort was blocked at Oakland.

The streak set a new franchise record. Here's hoping he can keep things going next week. 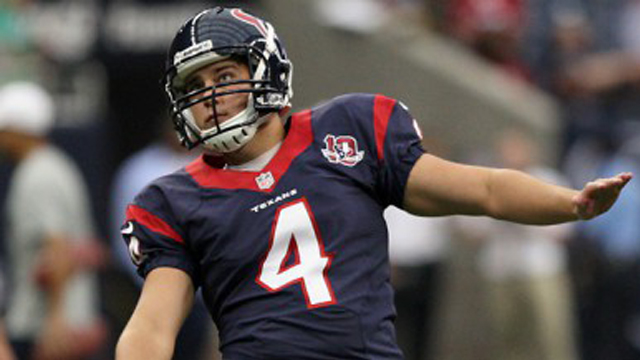 Mike had an efficient night, making use of all four targets in a tight game at home against St. Louis. He was also involved in the game's penultimate play, a 22 yard reception that brought the Bucs to the edge of field goal range.

After the catch, Evans lands awkwardly and waves for the trainer. There are two problems here... Tampa Bay is out of timeouts, and the ball is in the middle of the field. Since there were no timeouts remaining, the injury pause triggered an automatic ten second runoff, ending the game immediately (since play wasn't stopped until there were :09 seconds remaining).

Last week Martellus was the lone bright spot in a disappointing loss, but this week he was a main contributor in a huge early-season shock at San Francisco. You'd be hard pressed to name the top 10 NFL tight ends without including Money B.

Von's back! He had an impressive stat line in a surprisingly close game against Kansas City, but perhaps most importantly... he had a sack.