After losing in the National Championship game last season, Gus Malzahn is certain his guys have the fire to get back there.

I can’t speak for every member of the media that’s here to talk with Auburn Head Coach Gus Malzahn, but there’s only one question everyone should have for him: "Coach, what are your thoughts on being the man responsible for breaking the SEC’s streak of national championship wins?" Any other question is just trying to avoid the hard-hitting journalism we like to bring you here at GBH. That's exactly why we didn't ask that question.

Gus Malzahn kicked off the first round of player and coach interviews by giving the State of the Union for the Auburn Tigers. Of course by State of the Union, I mean giving some pretty generic statements and not really disclosing a whole lot of information. Malzahn told the collection of SEC media folks that last year was the most enjoyable of his career, and that he really felt his team achieved their goals of getting better each practice and each game. It's one thing to hear the coach talk about losing the National Championship game, but the Auburn players made it clear that they are still burned by being so close and not winning it all. Senior DL Gabe Wright told the media "The conference championship is a huge goal, but the National Championship is the ultimate goal." His demeanor changed when he was talking about the fire that's burning from that loss, so I backed away from the table sensing a hulk-smash was quickly approaching. Reese Dismukes, a four year starter at Center for the Tigers, said this season will be much tougher than last season since they'll have a target on their backs. In his eyes, "2013 was light years ago for me as a player. I'm ready to do better in 2014."

"Our players and coaches are extremely motivated after losing the National Championship by 13 seconds." -Auburn HC Gus Malzahn

Next season for the Tigers will kick off with a season opener against the Arkansas Razorbacks. While Gus Malzahn said he doesn't think his team is preparing any differently for the season opener, tight end C.J. Uzomah told reporters that he "loves opening up against a conference opponent." He said the team is fired up about it, and it shows in workouts. The Tigers are bringing back a lot of big-game experience on both sides of the ball, as well as their entire coaching staff for the second year in a row. Coach Malzahn believes this gives his guys a huge advantage in preparation for the 2014 season. It allowed them to have a productive Spring where the offense was able to focus on getting more balanced, and the defense was able to spend time perfecting their base defense. Malzahn said that his team was still learning plays past the halfway point of last season, and he hopes the staff and player continuity can help cut down on that learning curve.

Auburn certainly did not come to SEC Media Days with a lack of turmoil. Starting Quarterback Nick Marshall was cited late last week for possession of marijuana, and subsequently removed from attending the media session in Hoover. Malzahn addressed the latest on Marshall by first stating that, "Up until last Friday, Nick had been a model student, teammate, and citizen." Coach Malzahn continued by stating that he's not ready to declare any specific punishment for Marshall, but that he is remorseful. It was also announced that All-Freshman Defensive End Carl Lawson will be out for the season after having successful ACL surgery in May. However, Malzahn stated that Lawson is, "determined to make it back by the end of the year." 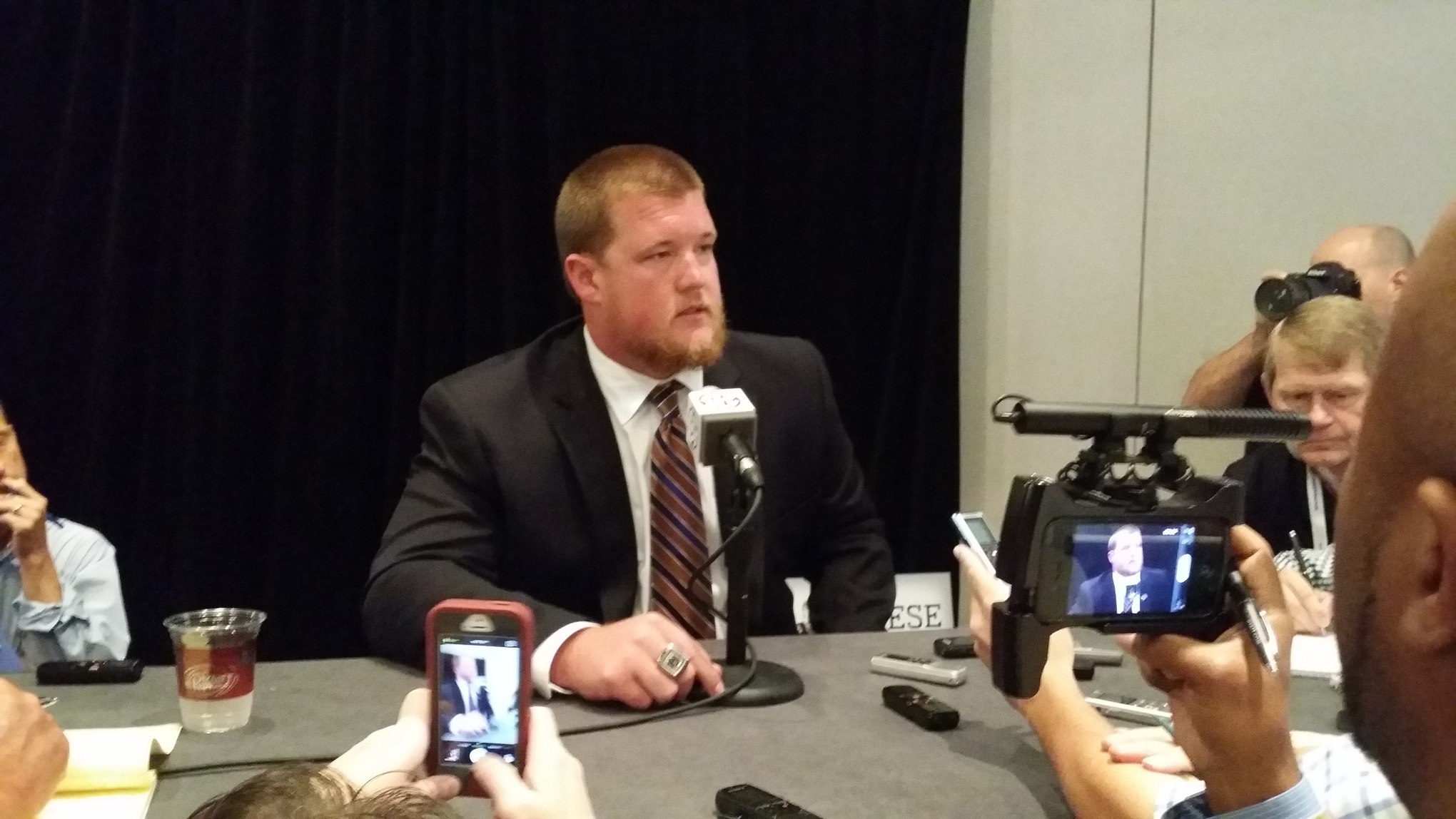 Four year starter at Center for Reese Dismukes is on the Rimington and Outland Trophy watchlists.

Malzahn answered questions about the hurry up no huddle offense, and his thoughts on players spending time in the off season with QB specialist like Manziel had with QB guru George Whitfield. An obvious proponent of the HUNH, Malzahn told the media that a lot of college teams are playing fast now, and the majority of high school teams across the country are spreading it out and playing fast. As far as redundant questions go, this one ranked pretty high on the list. Maybe someone from the media can ask the Pope what his thoughts are on Catholicism.

As they look forward to the 2014 season, the entire group of Auburn Football personnel on hand at SEC Media Days were wearing lapel pins bearing the number 43. The pins are a way for them to honor the past in former Auburn tight end Philip Lutzenkirchen who passed away on June 29, 2014. Coach Malzahn made it clear how special Lutzenkirchen was to him and the Auburn Tiger family. Auburn is working with the family to honor Philip, and they plan for that to continue for a long time to come.