Believe it or not, we are coming at you live from SEC Media Days 2014 from Hoover, Alabama. But how did we get here?

If you thought this was all a long-running joke, it’s okay. We did too. Of course we wanted to be at SEC Media Days. What die-hard college football fan doesn't? For four days the town of Hoover, Alabama becomes the center of the sports universe. After longing to bring our little bit of irreverence to the party, we are finally getting our chance. However, this year was not our first attempt at getting credentialed to the SEC circus. Much like other credential requests (you’re excluded CFA Bowl, you guys rock), the email gets sent, and then you move on and kind of forget you even sent in a request because you know it's going to get denied. But this time, something weird happened. It actually worked. It may have been a mistake, but it's too late to turn back now. So let's take a quick journey and explore how we got here.

The following events are factual, and in the order they happened: 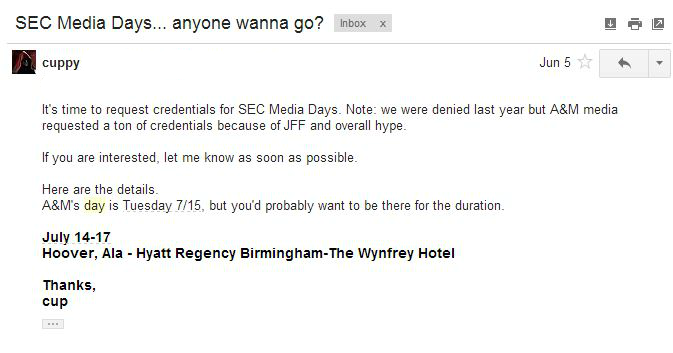 I wish I was creative enough to make up that email exchange. That's where the whirlwind of activity started. Again, this is where we all shrug our shoulders and assume this is the last we will hear about the topic.

And then, there was this. 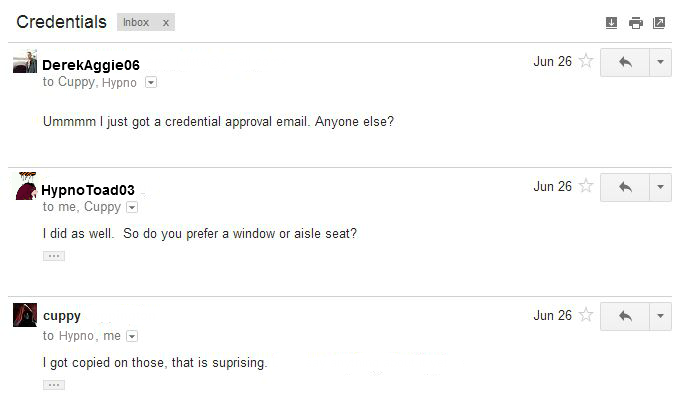 At this point, there was a lot of confusion. Is this some kind of clerical error? We were trying to find a confirm button somewhere on the email to make sure some intern wasn't able to correct their mistake until it was too late. The next stage of acceptance here was realizing we had no idea what we were doing. Do we get to interview everyone? Are we expected to interview everyone? Wait, who's going to this thing? It was pretty clear we needed to have a planning session.

Toad and I decided to meet up at Southern's Pizza & Sports Pub to lay out our game plan while we enjoy some pizza and cold beer. The conversation itself would have been an instant hit on the SEC Network.

We both made our way to Birmingham to finalize our planned questions, and start working in some of the stuff that helps remind everyone that sports are fun. Everything was in place and ready to go. We had our cameras and voice recorders charged up and ready. The excitement level about what was going to happen in the morning was enough to lose your pants over. Wait a second, where are my pants?

We're off to a great start here at #SECMediaDays as @DerekAggie06 has confirmed that he forgot to pack pants. Forgot, or never meant to?

Today's the day. I feel like a kid that woke up way earlier than his parents on Christmas morning, and I'm about to pee my pants (since I went and bought some) waiting for the fun to get started. Like anyone that's ever started a new job, we had no idea what to expect and showed up downstairs entirely too early. We aren't going to lie to you, it was a pretty big shock when we got to the credential table and saw our badges sitting on top of the pile. We loaded up on media packets, College Football Playoff notepads, and staked our claim on the second row in front of the main stage. So here we are with roughly an hour to go until SEC Commissioner Mike Slive takes the stage. We still don't now what to expect, but it's entirely too late to turn back now.