GBH Interviewed Lamar who posted a billboard in Aggie territory

While the interview was awkward at times, we wanted to clear up some confusion on Facebook about Lamar.

Share All sharing options for: GBH Interviewed Lamar who posted a billboard in Aggie territory

Yesterday, I was driving between College Station and Navasota and was shocked to see a billboard for Lamar University on the side of Highway 6. Like any diligent internetter, I posted the photo to Twitter, Instagram, and Facebook. Most people seemed to agree that Texas A&M should BTHO Lamar, but Facebook questioned the validity of the billboard: 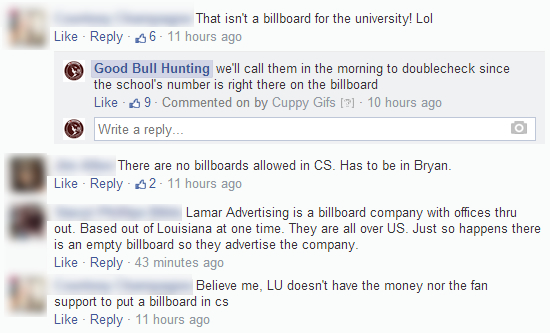 I wanted to set the record straight, so this morning I called the phone number on the billboard to learn more about Lamar.

CC: Could you tell me where Lamar is located?

CC: What city are you in?

CC: Ohhh, okay. I didn't even realize that. And how many folks do you expect to have in College Station on September 6th?

Lamar: Excuse me? [cc repeats question] What do you mean?

CC: Will you be in College Station this Fall?

CC: Ok, how many people do you think you'll have there in September?

Lamar: Who am I speaking to?

Lamar: Ok Gary, who are you calling with?

Lamar: Are you calling with another company?

CC: Like, not a company that makes money per se.

CC: I am calling to find out more information about Lamar like whether you have a mascot.

Lamar: Ok, we do billboards.

CC: Ok, so it is "Billboard People" then? That is the mascot?

CC: And what are your colors?

Lamar: Green. What does that have to do with anything?

CC: I was gonna do some mockups and designs and would like to incorporate the correct colors.

CC: Do you guys have any yells or cheers or anything to get you motivated?

CC: Okay, pretty straightforward then. So who is your best player?

CC: Just ability and maybe buzz on the national scene.

Lamar: Of course we are.

CC: Don't you think maybe that's a conflict of interest for you?

Lamar: Why would it be?

CC: When the Aggies play Lamar?

Lamar: What does that have to do with anything? We are Aggie fans here and support our Aggies.

CC: But since you're Lamar don't you think people might be upset if you're backing Texas A&M?

CC: Ok. Will you personally be there on September 6th?

CC: And you'll be wearing green or maroon?

CC: Ok, so do you think it will be difficult to differentiate Lamar from Texas A&M?

CC: So who is your coach this year? I hadn't really heard of Lamar until yesterday.

Lamar: Ok, you do know you're calling Lamar Advertising and not Lamar University.

CC: In what way? Like advertising for Lamar or...

Lamar: What is the purpose of your call?

CC: I'm trying to find out more information about Lamar.

CC: I'm trying to inform the people of the internet about Lamar.

CC: Well, most people hadn't heard of Lamar until yesterday.

Lamar: Ok, where did you hear about Lamar?

CC: On the internet... the tweeter.

Lamar: What about it?

CC: That's where I first heard about Lamar. And since September 6th is coming up quickly I just wanted to get a sense for what Lamar's all about.

Lamar: So are you not calling from Texas A&M University?

Lamar: Ok, where are you calling from?

As you can see, we're left with more questions than answers after the interview. I'd like to personally thank the worker at Lamar for speaking with me for over five minutes.