EA Sports announced today that they will not be making their NCAA Football game next year.

Share All sharing options for: EA Sports Puts the Kibosh on NCAA Football

EA Sports made public today what we all kind of knew was going to happen. There will be no EA Sports NCAA Football next season. I'm going to say some other stuff about it, but I just want to make one thing clear that pisses me off about this: You know damn good and well Johnny Football would have been on the cover, and it's a damn shame we won't get to see that. Okay, I just had to get that out real quick. 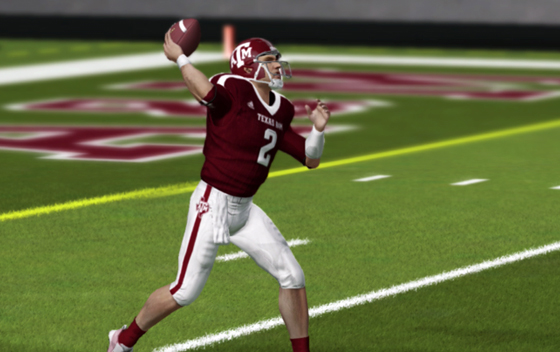 The decision comes on the heels of continued pressure from the plaintiffs in the O'Bannon lawsuit. If you've been living under a rock lately, the O'Bannon v. NCAA case is a tactical nuke of a class-action lawsuit filed against the NCAA for the league's continued commercial use of players' images after their playing days are over. EA was sucked into things due to their use of player likenesses in their NCAA Football video game series where real-life players have some incredibly remarkable similarities to the fake-life athletes in the game...who just happen to wear the same number, play with the same style, oh, and the stars tend to wear the same accessories. Sure their names aren't in the game, but odds are that QB #2 from Texas A&M is mentioned as "last year's Heisman winner" while you're playing the game. Hmm, who could that be?

Here's the thing. People buy this game and love this game BECAUSE the athletes in the game mirror the athletes we watch on the field. College football fans are junkies. We can't watch Johnny Football do Johnny Football things or watch Clowney run out of energy early in the 2nd quarter play out live on our TVs 7 days a week. But we can throw a disc into our console of choice and put on that #2 jersey to take on whatever team in the country we choose. I'll admit it. I only bought the game this year because I was pretty sure it would be the only chance I got to play the game with Johnny in it. Now, I thought it would be because he would be in the pros next season, not because of the game not being made. Would the game be anywhere near as exciting if it was a bunch of random dudes out there with a 70 player rating and numbered 1-100? No, and that's a stupid question. College football fans love the game because they get to block out reality for an hour and become the players they love to watch and cheer for on the field. EA Sports knows that, and that's why the game is made the way it is. It's not rocket science. We chatted with the Product Manager for NCAA Football a few months ago, and it was clear that that team is a group of college football junkies creating a product for a nation of college football junkies.

The NCAA's statement last month included similar language about current student-athletes but cited legal costs as the reason for not renewing its contract with EA Sports. -Kristi Dosh, ESPN.

Therein lies the problem. EA isn't the only company to profit off of player likeness. EA isn't the only company to follow NCAA rules and get sucked into this lawsuit. Don't get me wrong, they definitely used the NCAA as a scapegoat to say they were following the rules and try to wipe their hands clean of the problem. This lawsuit has been fascinating to follow,and every college sports fan should be interested in it. The NCAA is stuck and was finally called out for the insane profits they make off of "amateurs." The NCAA had already decided to pull out of licensing its trademarks to EA, even if they gave a thin reason for it. This afternoon, Jon Solomon tweeted that both EA and CLC had reached settlements with the plaintiffs. That means there is one big, ugly name left on the defendant side of the table, and it's the NCAA. This is all setting up to be a well-deserved and crushing blow to the NCAA. Thousands of current and former players are involved in this settlement. That's right, current players too. What is the NCAA going to do when a current player accepts their settlement check that stemmed from a class action lawsuit against them?

Does it suck that we won't have a college football video game next season? Of course it does. In my opinion, the game had been stagnant for several years now and lagged considerably behind the Madden franchise in gameplay. With their exclusivity coming up for expiration, a lot of gamers were thrilled to have some competition back on the market for EA to make some big jumps with their gameplay. Is this a permanent thing? We'll see. It sucks that the passionate guys who work on the game that we were able to interview won't be able to work on the game they really loved and enjoyed making for fans. Some think this will blow over after the O'Bannon case comes to end (which is not going to happen any time soon, the NCAA is in this battle for the long haul). The reality is that EA was spending a ton of money developing and marketing this game already. If they have to add paying current athletes that are in the game to the budget, I don't see a way where the game can continue in its current format of mirroring what we see on the actual playing field.