Share All sharing options for: Vintage Football Programs of the SWC 1906-1935

Remember when football was about more than just glamour and fame and national recognition? Back in the glory days it was about regional hatred and creative artistry, and nowhere is that more apparent than this collection of vintage Southwest Conference Football Programs. So grab hold of your bowler and scope out these dandies. The site contains many, many more, so I've broken them down by time period and we'll pick up on this later in the off-season with the '30s and '40s. 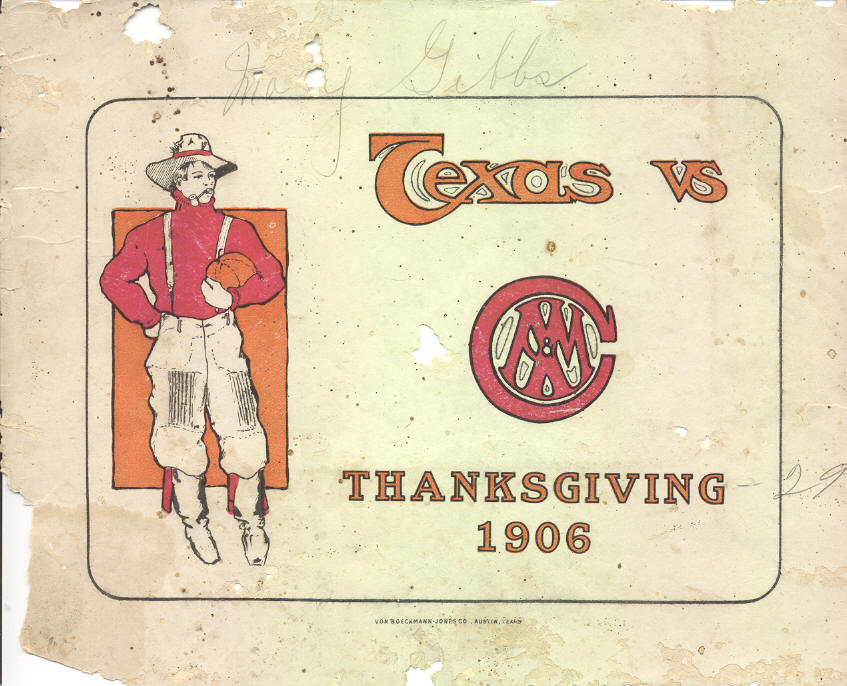 1906 A&M-Texas: Thank goodness for Mary Gibbs and her foresight in hanging onto this beauty for so long. Nothing says brutal gridiron hate like a turtleneck-wearing cowboy in suspenders and fringed boots on tiptoes holding a pumpkin. 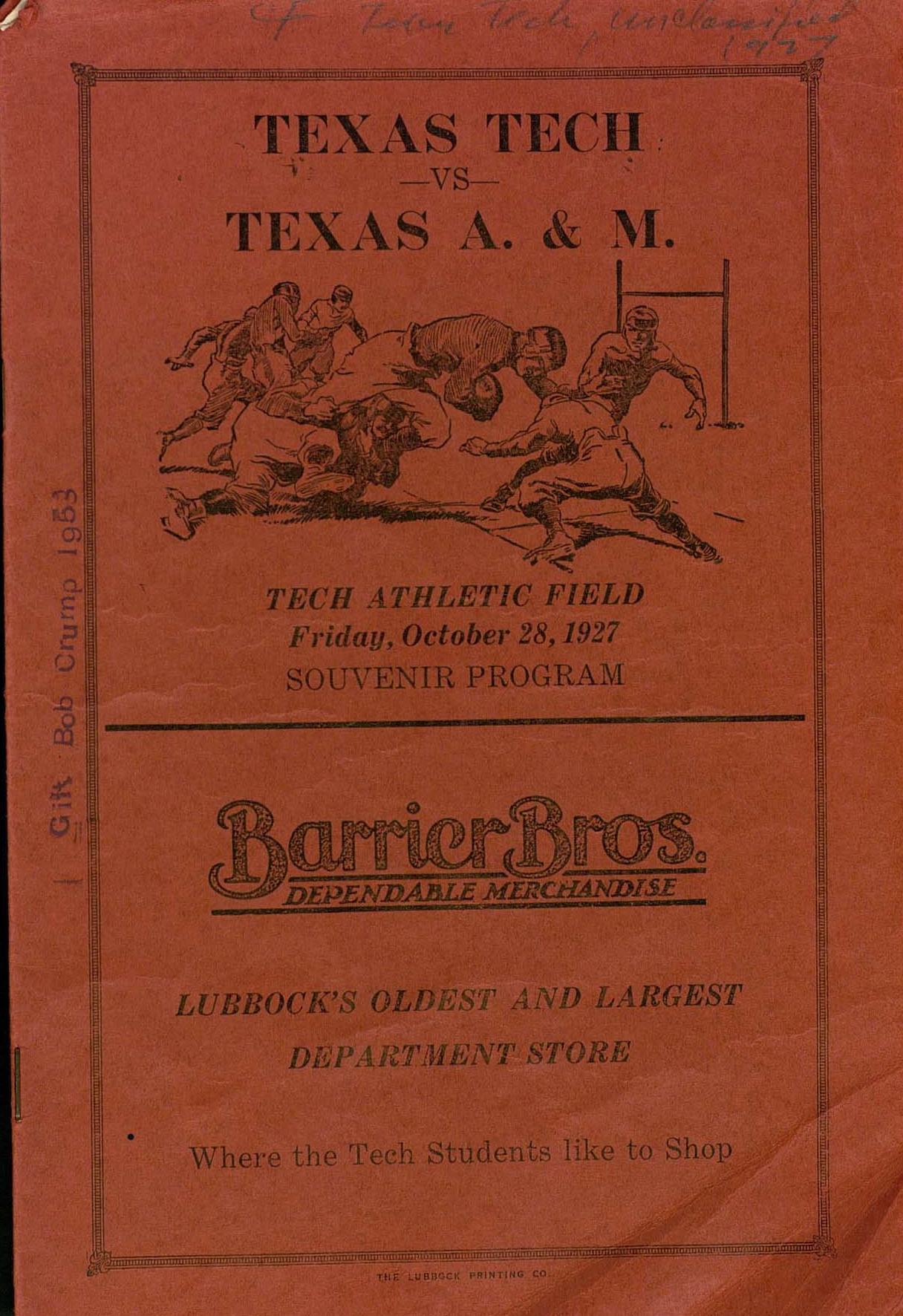 1927 Tech-A&M: Lest we think that advertising in college football is a new phenomenon, here's a Tech program where half the cover is devoted to a department store. Where the students shop. Sure. How many department stores could there have been in Lubbock in 1927? 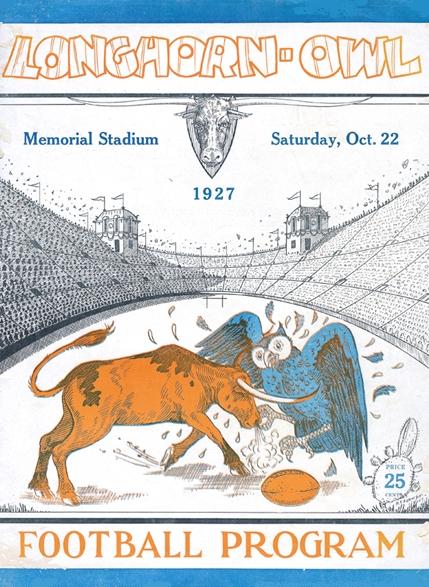 1927 Rice-Texas: Ahh, the good ole days when a freakish-looking owl with a 20-foot wingspan could be playfully gored by Paul Bunyan's baby ox in a castle full of people attracting swarms of flies.

1932 A&M-Texas: This pictorial's cover is graced by the cartoonish good looks of Ernie Koy, one of the exponentially minute fraction of athletes to play for both the Longhorns and the New York Yankees, coming up short of pulling off every casual sports fan's rooting interest trifecta only by not playing for the LA Lakers. 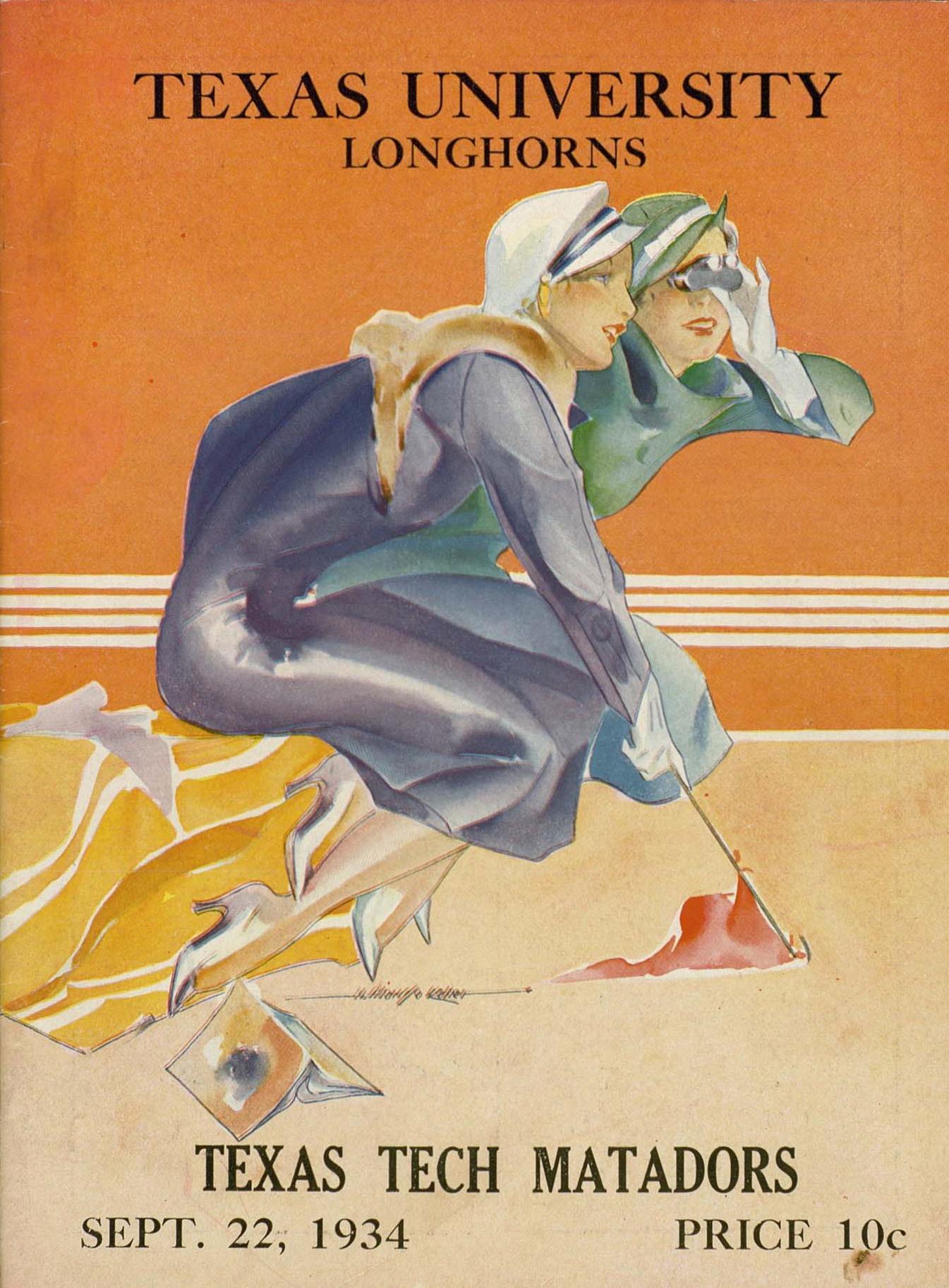 "I don't know, Maybelle, but take a gander at those fellows out there in the dust patch. They're carrying on like all get-out!"

"And how! Say, where'd you leave the martini shaker, old girl?" 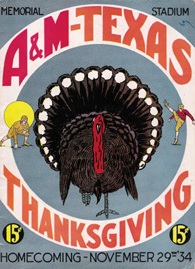 1934 A&M-Texas: with the country in the throes of the Great Depression, the turkey was worshipped as a deity. Meanwhile, the artwork represents players from each school in a pose that would characterize their team for much of the remaining century: Texas A&M punting and a Longhorn player performing awkward calisthenics under a full harvest moon. 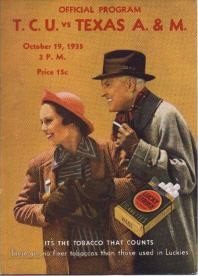 1935 TCU-A&M: Wrap up against the cold and head outside into the crisp Autumn sunshine to enjoy your foot-balling match with the rich, smooth flavor of Luckies. This man is 25 years old and has been smoking Luckies his whole life. Smoke Luckies, the cigarette of destiny. (TCU would finish the season ranked #4. The man would not.)