Should Reveille be a Mutt?

Please read before tarring and feathering.

Share All sharing options for: Should Reveille be a Mutt?

Reveille got a pretty large boost in popularity (or at least her mascot corporal did) after the infamous SMU-player-blocking from Saturday's game. As she's already one of the most instantly-recognizable live mascots in all of college football, the profile of Reveille has never been more prominent.

As you may have heard, the current Miss Rev will be stepping down later this school year, and the University is setting up a 12-member search committee to select her successor. It may seem obvious to most that the new First Lady of Aggieland will be a purebred Rough Collie, just like the many who have come before her. But what if Texas A&M went in a different direction?

The very first Reveille was not actually a purebred dog at all, but a black-and-white rescue mutt. From aggietraditions.tamu.edu:

Reveille I came to Texas A&M in January 1931. A group of cadets hit a small black and white dog on their way back from Navasota. They picked up the dog and brought her back to school so they could care for her. The next morning, when "Reveille" was blown by a bugler, she started barking. She was named after this morning wakeup call. The following football season she was named the official mascot when she led the band onto the field during their half-time performance. When Reveille I died on January 18, 1944, she was given a formal military funeral on the gridiron of Kyle Field. She was then buried at the north entrance to the field, as all Reveilles are, facing the scoreboard so that she can always watch the Aggies outscore their opponent. 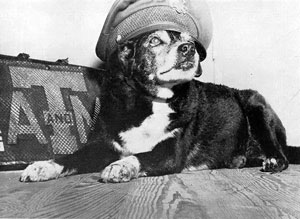 Reveille II was not a Collie either, but a Shetland Sheepdog donated to the University in 1952 by Arthur Weinert, Class of 1900. She was originally cared for by committee by the Aggie Band for a couple of years before a cadet found her wandering around campus in 1954 and began the tradition of taking her everywhere he went. Reveille II had a rebellious streak, as well. Per Wikipedia:

"Miss Rev," as they called her, marched with the Aggie Band at football games, but had a habit of relieving herself on the football field. Students often placed bets as to which yard line she would choose.

It wasn't until 1966 that a purebred Collie was selected to serve as Reveille III, and details on the decision are not well-documented. However, like many traditions, it probably began largely by coincidence.

At no time in the history of Texas A&M has the spirit of the underdog been so present and embraced as our entrance into the Southeastern Conference over the past few years. It's been like a fresh start, and it's been a huge kickstart for the university. What better time to hearken back to the original spirit of Reveille than now? Texas A&M has a chance to send a positive message by embracing another rescue animal as a mascot, while honoring the spirit of how Reveille came to be associated with the University at the same time.

Given our propensity as Aggies for staying the course, combined with an inherent institutional hesitance to break with the status quo, it seems unlikely that the committee will select a dog that is not a purebred Collie. But wouldn't it be something if they did decide to go with a loveable mutt instead?