About that turf that was coming up in chunks... AD Eric Hyman was wondering the same thing that everyone else was, but apparently according to team doctors the answer is No, the turf had nothing to do with the injuries to Speedy and Henderson. Here's hoping that the stuff takes root before Ole Miss. Next time it rains, let's just get the Swaggercopter to fly low over the turf for a few hours to fan it dry.

Bad stuff can happen...unless you've got Armani Watts. Sam Khan breaks down the bizarre ending to the first half of Saturday's game and gives us Sumlin's full thoughts on the blocked field goal returned for touchdown negated by a sideline penalty.

PONY UP....ERR, SIDEWAYS OR DOWN. Or some direction. Some are calling SMU the worst team in college football, and looking at those first two games and opponents' results, it's difficult to argue too much. Holding Baylor to 45 is actually pretty respectable in hindsight. They get to host a team coached by a pissed-off Kevin Sumlin next, so that probably won't help them much since they don't have a full-time coach.

"The SEC West is very ranked" said the headline. When one division of one conference makes up half of a Top 10 poll, that division is most likely the SEC West. It's still way too early to take polls seriously though unless you are a Paul Finebaum caller calling in to expound in the intricacies of non-conference scheduling and transitive nuances.

It's SWC September, week 2. Here's a throwback SMU program from the '40s. I have no idea what's going on here: 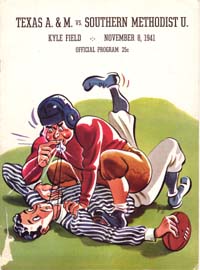 Lots more of them here.

Have a quick Monday, all.