WHAT ESPN ALMOST PUT ON THE AGGIE SEC NETWORK GRAPHIC

It was almost so much worse.

Share All sharing options for: WHAT ESPN ALMOST PUT ON THE AGGIE SEC NETWORK GRAPHIC

As you have probably seen already, ESPN released their SEC Network graphics yesterday. Texas A&M's was very sharp and incorporated a wide variety of traditions and unique icons. HOWEVER. It also included a picture of a DANCE TEAM MEMBER in the lead-in, and we can tell you that was none too popular with some Aggies. (Ed. note: we ran into the member of the dance team on Twitter, and she was kind enough to answer a few questions here.)

What you may not know is that ESPN in all their Aggie loathing had even more vile schemes laid out, and, believe it or not, the dance team member was the least offensive one that they settled on due to pressure from the newly-minted SEC Network. Let's take a look at some of the other disasters that almost graced our animated intro:

Fortunately all of the above fiascos were averted, and in the end this is what we had to decide to get upset over: 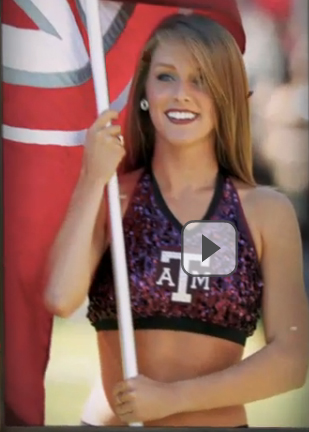