AGGIES NEEDED! If you're a current student (or even if you live in and around Aggieland), try to make it out tomorrow around 12:45 at the Ring Plaza as the SEC Network will be filming a Yell Practice and they need a good crowd. Details (including parking info) can be found here.

HE STILL AIN'T TALKIN'. You'd think by now people would know not to ask, but there you have it.

Pressed again if he would at least compare and contrast the two, Sumlin stuck to his script. "No," Sumlin said to a chorus of laughs. "It's a good question. Ask next week some time."

Coach Sumlin will tell us who the QB is going to be when he's damn well good and ready.

Year 3. This ran on Monday, but I'd be remiss if I didn't add it: oscarwildecat wrote an excellent piece about our defensive coordinator's time in College station so far, and what he needs out of this season.

Year 2. The Team Speed Kills writer takes a look at the achievements of Les Miles, who is quietly heading into his 10th season at LSU.

Here's some beisbol in August 'cuz it's August: Mississippi State announced yesterday that they're going to spend $40 million to completely rebuild their baseball stadium on its existing site. The greatest part of the whole story is the schematic rendering of Bulldog fans barbecuing: 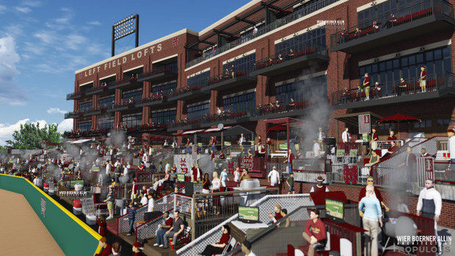 Catching up with the gunslinger. If you missed it last night, we found this video update on Stephen McGee and his current endeavors. Fun facts include the fact that he has a pet bobcat and much more.