THE TAILGATE: A Graphical Preview of Texas A&M vs South Carolina

If laying a total egg wasn't enough, some media personalities want to find an excuse to paint the team as divided. Media loves drama.

I don't care about all that. The game is Halloween. I will probably be dressed as this. Myles Garrett will be the scariest thing in College Station.

Share All sharing options for: THE TAILGATE: A Graphical Preview of Texas A&M vs South Carolina 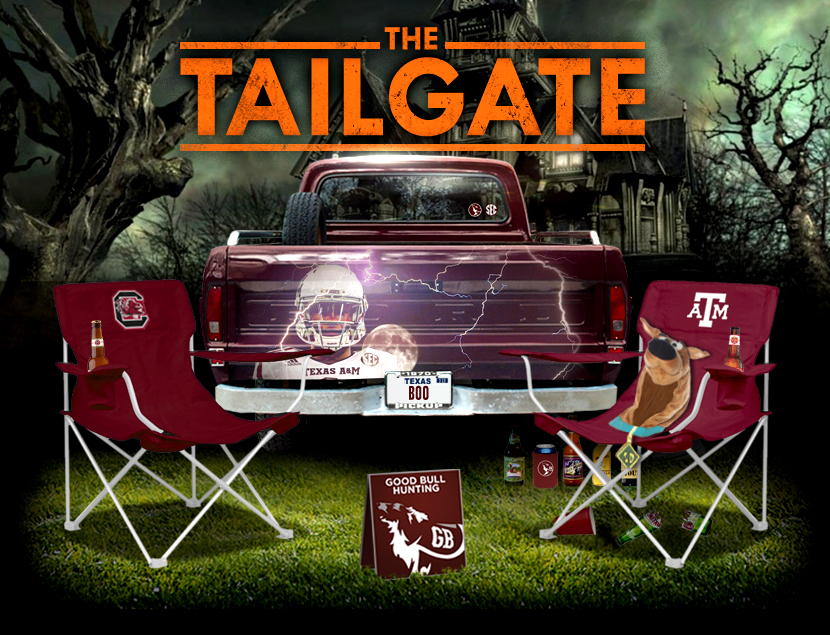 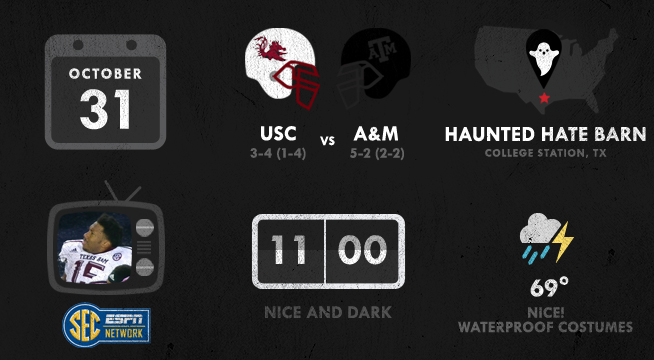 We meet again, Aggie faithful. It’s a lot more fun to write when your team is a national title contender, but now we’re out of the top 25 and again we find our Aggies as a team who must win out and hold onto hope that others’ wheels will fly off in order to make an appearance in the SEC title game.

But we don’t care about all of that this week, do we, Aggies? No, this week the Fightin Texas Aggies have the South Carolina Gamecocks. At home. Without Spurrier. And they get to do it in some sick black uniforms on Halloween under the lights.

Imagine the fear this Ol Ball Coach-less team will feel when they exit the tunnel and see the aTm logo flashing against all of the bright lights that accompany Aggie Nights. How much faster will Myles Garrett appear against the lush green grass of Kyle Field, its wifi stronger than ever, as he sprints toward Perry Orth for another sack? How awesome will [quarterback to be named later]’s throws look coming off that black uniform, logo illuminated by the camera flash?

"I don’t know," Myles Garret muses from his locker. "I could go as a hulking puppy dog."

"Whatever, man." Garrett responds. "What about you, coach?"

"TC from Magnum PI. I already have the chopper," says Sumlin. "Kyler?" 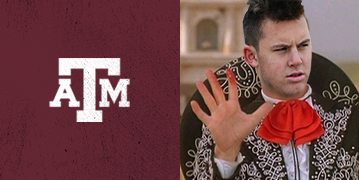 The group's spokesman usually has a firm handle on the situation unless...ooops, yeah...it's real. They're really shooting bullets. 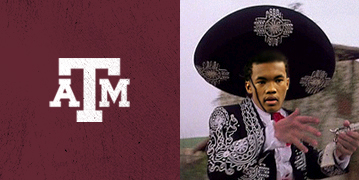 This diminutive desperado is lighting-quick, but his sharp tongue can sometimes land him in trouble. 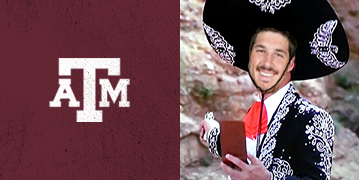 Now's your big chance, so study that playbook and don't misfire when you try to summon the Invisible Receiver. 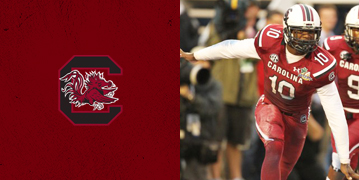 LB: Started the season off strong with approximately nine interceptions in the end zone against UNC on opening night. Tied for 4th with a certain someone in SEC tackles. Also leads the team in the TFL, PBU, and FR categories. Sort of good. 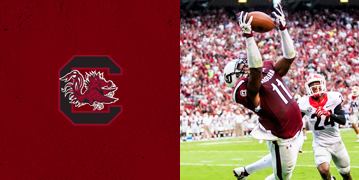 "WR": Their best offensive weapon will line up in anywhere from 8-13 positions in any given game. He's technically a wide receiver but also can do this on occasion. 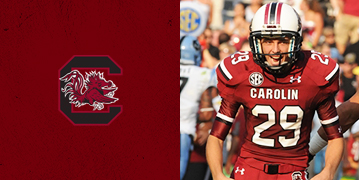 K: The Gamecocks are relying heavily on the leg of the Texas native as they have currently scored more FGs (15) than TDs (14). He's coming off a four-FG performance against Vandy so may be feeling his oats a bit. 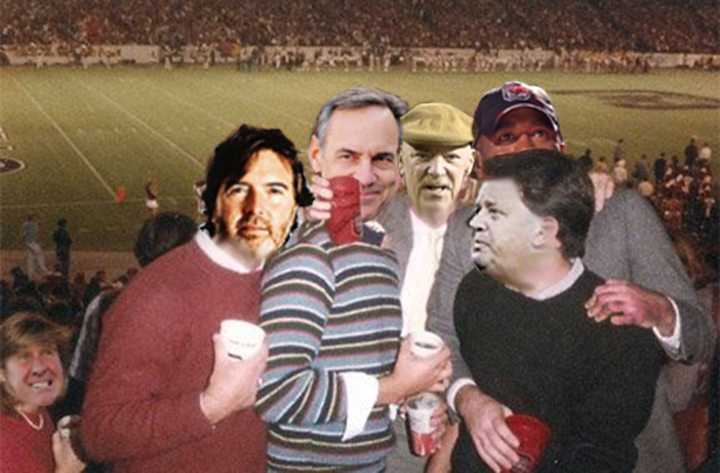 The Gamecocks are a program in transition. What few realize is that the future of South Carolina Football is driven by a secret society of five men united by their love for their school. Each Fall they gather to party like fraternity men, but this year they're also tasked with replacing a coaching legend. Don't underestimate their powers.

THE SMART KID: Charlie Weis (GA/assistant coach 1985-1989, received Master's degree while there.) You may question his intellect, but the fact remains he's making money for nothing right now.

THE BOOKWORM: Charles Frazier (Ph. D. in English, 1986) Knows the back trails of the Carolinas inside and out. Stealthily spreading the Gamecock gospel.

THE BUSINESSMAN: Bob McNair, class of 1958. Understands the boardroom, wheeling-and-dealing side of big-time football.

THE GUY WITH THE GUITAR: There's always that guy. Also in charge of making burgers at the cookout. 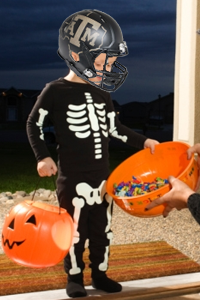 This may sound crazy, but there was a time in this country when children were allowed to trick-or-treat in the actual dark - often completely unsupervised and wearing outfits designed to be undetectable by passing motorists. Nowadays it doesn't matter how scary your costume is, your mom is still gonna make you sneak out under cover of afternoon when even the Poltergeist clown can't be scary. Oh, and she'll probably make you put reflectors on your mask EVEN THOUGH OPTIMUS PRIME NEVER WORE REFLECTORS MOM! Ugh, the Aggies better hope it's not too cold on Saturday or she'll probably make them wear a jacket over their uniforms, too. 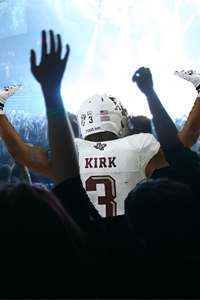 Christian Kirk is just 45 yards shy of the Aggie freshman receiving record, a stat made all the more impressive by the fact that he had just two receptions for 16 yards last week. A&M is certain to send a few passes Kirk's direction. Also the ground's direction. And in the direction of the stands. And more than likely at least once in the other team's direction. 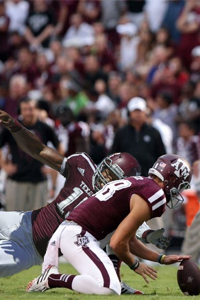 Odds makers have the Aggies as 16 point favorites over the Gamecocks this weekend despite the grotesquerie on display the last two weeks. Vegas don't roll dice, which means we know three things as immutable fact:

2. They definitely did not read the thread you started on TexAgs about how Kevin Sumlin is already coaching Miami using Skype and a drone holding a clipboard.

3. The defense is gonna need to score at least 2 touchdowns and a field goal. 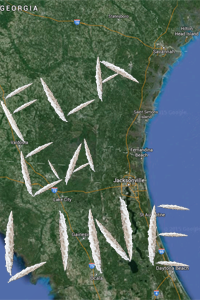 Most of the year Jacksonville exists to provide 40-something divorced real estate agents a place to talk other 40-something divorcees into high-risk property loans and casual, unprotected sex. But once a year it is home to The World's Largest Outdoor Cocktail Party, an opportunity for the rest of the world to rest easy in the knowledge that these two fan bases are spending the weekend where nothing nice can get broken.

To enjoy like a native try mixing yourself an Alimony Check: one part Parrot Bay, two parts Franzia, and a splash of Pedialyte served over ice that smells like low tide. Sprinkle with crushed Vicodin and garnish with a lipstick-stained cigarette butt. 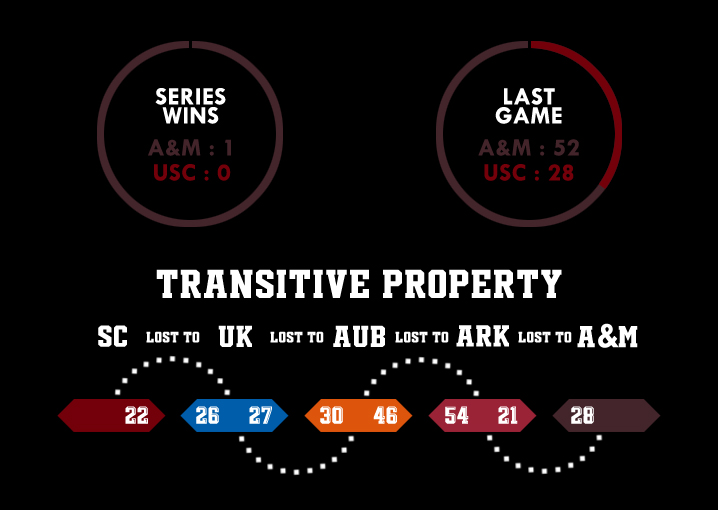 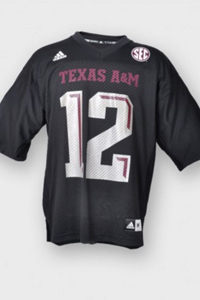 CREATURES OF THE NIGHT

The Aggies are back in the friendly confines of Kyle Field for Halloween (no ghostly booing). Show your support for the all-black Aggie Nights unis by sporting a Black Ice #12 jersey from MaroonU. Don't forget your zombie make-up or Reveille facepaint.

This week, we are happy to also let you in on another contest from The Warehouse at C.C. Creations. The big prize includes 2 Legacy Club suite tickets to the South Carolina game, a parking pass, and a $150 gift card to The Warehouse. Click here to enter that contest and complete the form below for a chance to win today's WTW jersey!

Enter to win a FREE Adidas Black Ice Jersey from MaroonU by completing the form below. 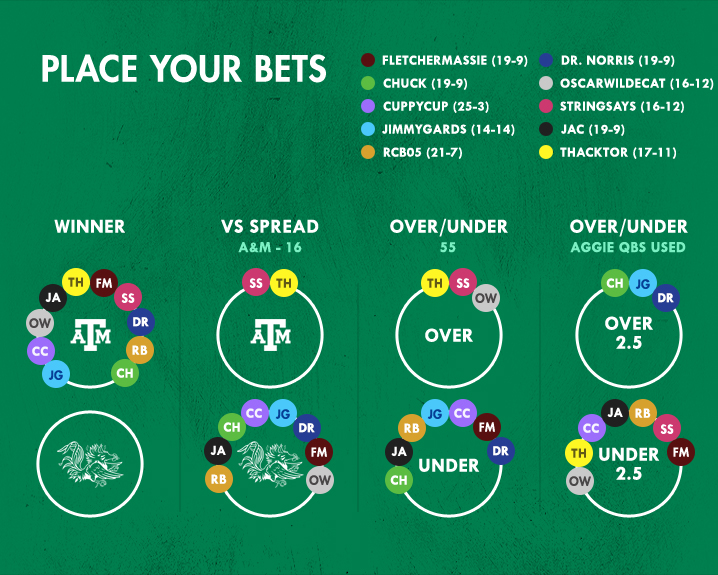 A starting quarterback is selected. This player puts the ball on the money. The offensive line digs in and blocks their asses off. The receivers, hungry for yards, catch everything. We run the dang ball. Points are scored. The defense keeps doing what it's doing. I decide against the Britney Spears costume.

We get really cool uniforms that show well at night, and the game is played at 11:00. How absurd would that be? I go to the party as Britney Spears, and perform "Oops I Did It Again" complete with the dance routine and remember nothing. 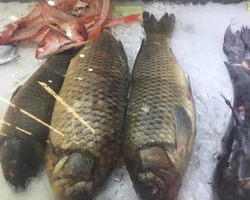 Aggies when posting on message boards this weekend remember: "No offense" has multiple meanings. #GBHTailgate 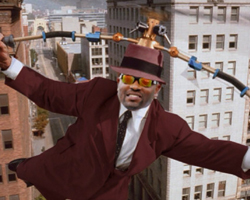 FYI for any ghosts at the game on Saturday, we don't boo. #GBHTailgate 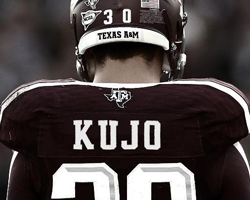 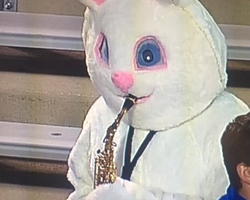 Nothing in sports exhausts me quite as much as fans being superstitious about alternate uniforms. 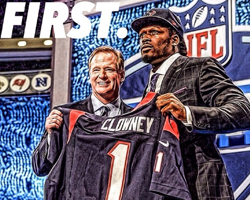