Mark May: A History of Arrests

It looks like Mark May is at it again, making hypocritical comments about FSU's Jameis Winston who is suspended for the game against Clemson.

Share All sharing options for: Mark May: A History of Arrests

After Mark May criticized Florida State QB Jameis Winston's behavior this week, his hypocrisy and history of arrests became a hot topic once again. Remember, that May said Johnny Manziel was bringing "shame to the game" during the autograph scandal last year.

One FSU student made a terrific sign for ESPN's College Gameday featuring the arrest tally scoreboard of Mark May and Jameis Winston.

The sign has been featured prominently on this morning's broadcast.

If you're new to Mark May's hypocrisy, here is a brief summary of his known legal run-ins, as found in our article from 2013.

The Pittsburgh Post-Gazette dated January 29, 1979 reported that Mark May was arrested for disorderly conduct, resisting arrest, criminal mischief, terroristic threats, and inciting a riot. That's quite a list of allegations! At the time of the arrest, May was a sophomore offensive lineman at Pitt. 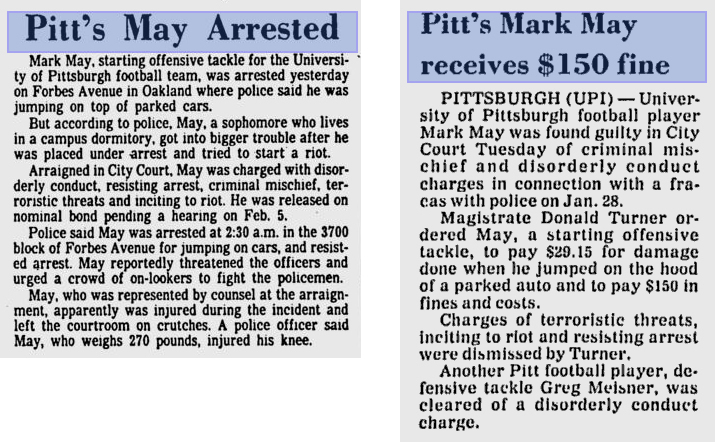 But wait, there's more. We discovered that Mark May was arrested twice for Driving While Intoxicated during his pro career with the Washington Redskins. According to this article from the Reading Eagle, May was arrested once in 1985 and again in 1990. Following the 1990 arrest, May was sentenced to two days in jail (180 with 178 suspended) and a $500 fine ($1000 with $500 suspended), as reported in the Rome News-Tribune. 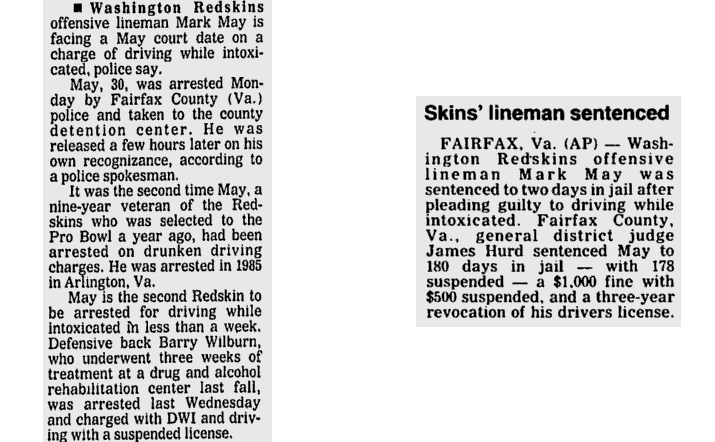 Mark May was 30 years old when he was picked up for his second DWI. Jameis Winston is 20.