Wow, so... that was fun, wasn't it? Let's jump right in and look at some personnel, formations, success rates and a few other things. To note: I do not chart garbage time, and for this game, I considered the last drive, glorious as it was, to be garbage time.

First, personnel. As has been discussed a lot already, Cam Clear's injury changed these statistics. When he was in, we were clearly committed to mixing in a fair dose of 11 personnel. Once he got hurt, we basically were in 10 personnel the entire game, although Ricky Seals-Jones shifted between slot receiver and H-back positioning. For charting purposes, I consider him a wide receiver regardless of where he lines up, and I consider Clear a tight end. Luckily for A&M, both players are versatile and can seamlessly move to different spots, which is one reason we are so tough to defend.

I charted a total of 81 plays. First, personnel. 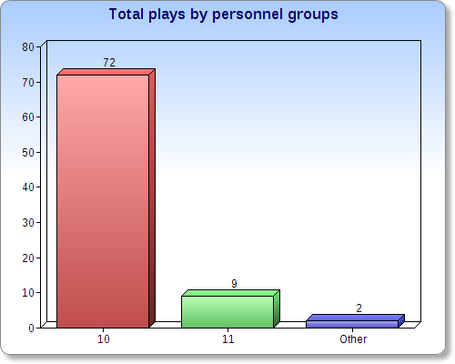 One big note regarding personnel. Clear got hurt on the 16th play. Through 16 plays, he had played 8 of them. So I think it's fair to assume that when he's healthy, we will be much closer to 50% of the time with him on the field. 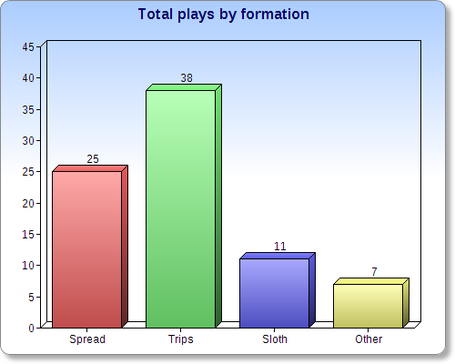 So what does all this mean? Well, for one thing, we are still a one-back team. I thought we might see some two back sets, but we saw exactly zero. Also gone are the five-wide sets, at least for now. Sure, we occasionally sent our running back in motion leaving an empty backfield, but not once did we line up with five wide receivers. That's a change from last year.

I plan on doing some deeper down and distance numbers for you later but through one game, the numbers aren't very interesting. On 37/41 first down snaps I charted, we were in 10 personnel. We called passes on 31/41, and on those, Hill was was 21/29 with two scrambles.

For the game, A&M was just over 60%. That is right in line with what we were doing last year. 60% is kind of the number I look for to indicate that we had a good day. Here are our success rates:

As you can see (and we all knew), we killed on 3rd down. Now, here are the success rates of each running back on their carries. I look forward to seeing this number over the course of the season.

Another thing I will track weekly and cumulatively throughout the season is Kenny Hill (or whoever our QB is) and how he does in and out of the pocket and how he does when pressured and versus different amounts of rushers. The early returns were, as you'd guess, promising on all fronts.

As for other stats that jumped out at me, there are a few. I posted this already on a previous fan post, but we racked up all that total yardage without a single 40+ yard play. We were just consistently good. Tons of 5-20 yard gains. In fact, 42 of the 81 plays I charted went for at least 6 yards. That's a very impressive ratio.

Another thing I'm tracking this year is my version of explosive plays. "Mini-explosives," if you will. For these I'm looking at runs of 7+ yards and passes of 15+ yards. We hit those on just over 25% of our snaps, 21/81. The ratio was about the same for runs and passes. For what it's worth, Trey Williams was easily our best running back in this category, getting four explosives on eight carries. No one else had more than one.

Of the 81 plays, charted, the running backs got an almost equal number of snaps:

The receivers totals were interesting too:

Again, I look forward to bringing you more numbers, some the same and some different, each week. Thanks to the magic of spreadsheets i can pretty much sort any combination of things you'd ever want, so if you have any specific things you want pulled, please let me know in the comments.

I chose not to track distance and location of each pass like I did last year because Ranger222 is doing a killer job on that front, so search for his posts if you are curious about that.

Finally, I wanted to show a few things that stood out to me and/or are easy to show from some video stills of the game.

First, a quick callback to last week's post, where I speculated that one wrinkle we might see more of would be trips formation to the boundary side of the field. I was feeling like a genius when we pulled that formation out on just the third play of the game.

You can see from that shot the problems that formation presents. Up top, Josh Reynolds has half the field to work on against a corner. Tons of open space. Down below we have three receivers that stretch the field vertically at different depths. We end up missing an open deep route to Ricky Seals-Jones on this play but keep an eye out in future games for this look.

Here's another "special" version of a normal trips formation. Just like the above example, we only did this one time all game. And it worked, as we scored a touchdown. Any time you notice a formation where something is different that the normal, odds are there is something very specific the coaches are going for and you should expect a fairly high hit rate. On this example, we run trips to the field side, but look at how close our two inside receivers line up to each other. 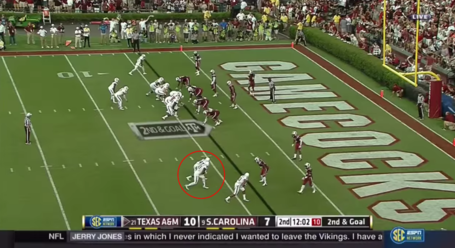 We do this to spring Seals-Jones free with a bit of a rub route. Malcome Kennedy releases ahead of RSJ, allowing RSJ to step behind him and avoid being jammed at the line. He runs a slant to open space in the middle and it's an easy touchdown. 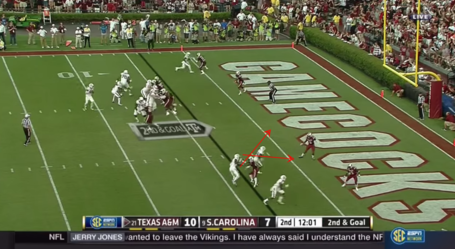 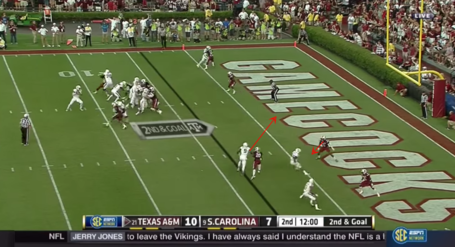 Next up let's just throw a quick bone to the offensive line, particularly center Mike Matthews. This is a simple draw play but I just wanted to point out the awesome pancake block Matthews executes. Also, South Carolina only had six players in the box and we had six blockers plus a quarterback and a running back. This was the world's easiest draw play. 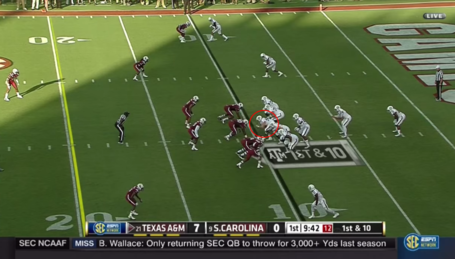 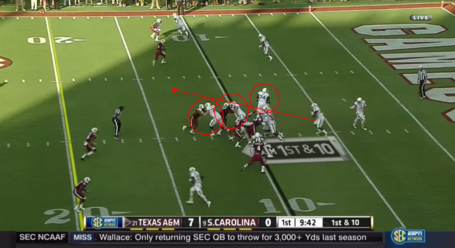 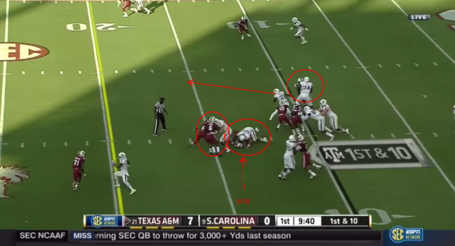 And finally, let's look at one of the most classic reads in football, a curl/flat read against a Cover 3 defense. This is nothing new, nothing specific to the Air Raid offense, nothing difficult really. But it just stands out to me as one of those basics of football that you can see in every game. As you can see below, the defense is in Cover 3, with each deep player responsible for one deep third. 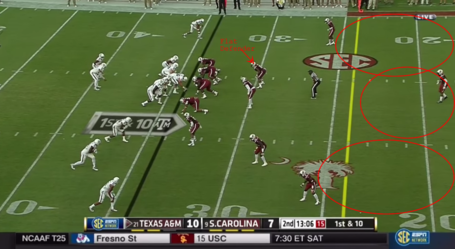 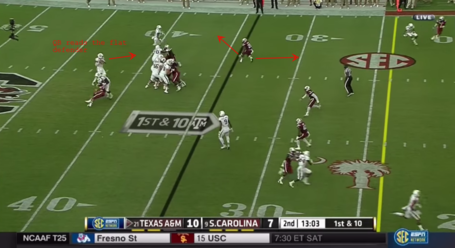 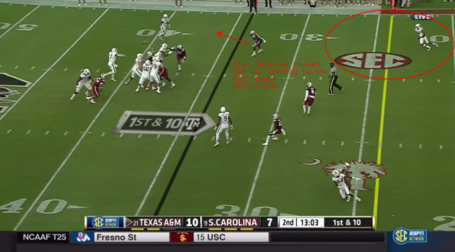 That's all for now but time permitting, I'm hoping to do one more post this week looking at a couple other things I noticed.