THE TAILGATE: A Graphical Preview of Texas A&M vs Rice

Fast forward to 2014 and we are on the eve of yet another showdown. The Aggies will emerge victorious once again, but who among you has the courage to face this evil beast and bring him to...

Share All sharing options for: THE TAILGATE: A Graphical Preview of Texas A&M vs Rice 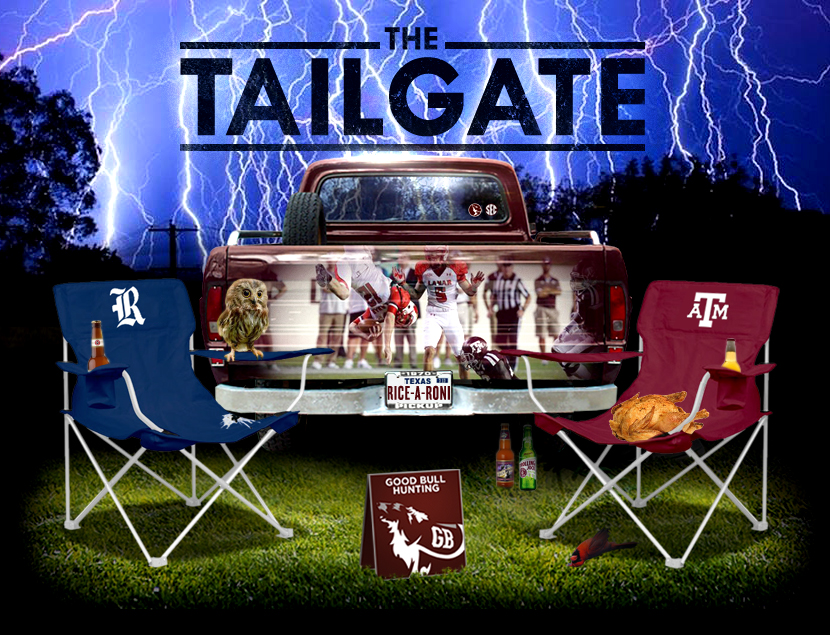 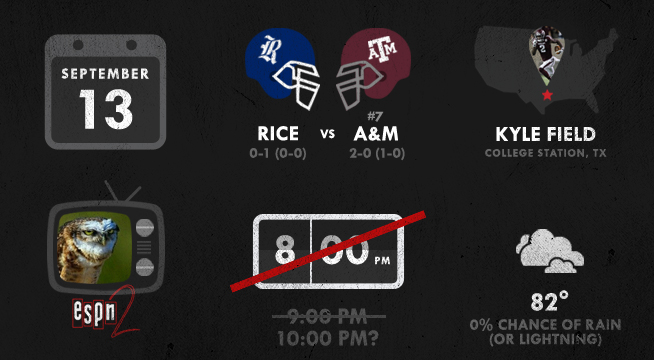 RICE TO SEE YOU

So, I'm doing my customary bit of scrambling around the internet looking for things to read about our upcoming opponent (the title "Uninformed Smack" is not bullshit, y'all) and I came across this little gem in the Bleacher Report. Go ahead, it's OK. You can click on it. So, for the rest of this little piece here, I'm going to pull from the article and respond in kind. Please enjoy my debate with an author who is trying to get 8 pages of material for a game that should end in a landslide defeat. I'm starting on the second page of the "slideshow" if you're curious.

"Texas A&M is a better football team than Rice."

"If the Aggies show up excited and mentally prepared to play, they will beat the Owls."

OK, I can see what you're doing. That's the standard song and dance of "on any given Saturday" and normally that's true but there is not a chance this team isn't excited and mentally prepared to play this Saturday. I'm pretty sure they looked at their consensus top-10 rankings across the board and managed to be offended that the Aggies are only ranked #8 in the Coaches Poll. Kevin Sumlin would like the rest of the coaches to know that they can take that #8 ranking and shove it up their asses, and he'll have the players ready to make that statement come Saturday. But continue... tell me more about what Rice needs to do to win the game other than replace the entire roster, coaching staff and mascot. They get to keep the MOB. The MOB is cool, I don't care what you think.

"As long as the Aggies avoid turnovers and major injuries, they will win this game going away. They need to see sophomore quarterback Kenny Hill progress as a quarterback."

"This game really represents an opportunity for the Aggies to get better. If they play with the same enthusiasm and passion that they brought to the field against South Carolina and Lamar, they will win."

At what point do you call your editor and say, "Hey, sir or madam. How's your evening? Oh, you're having dinner with the kids? That's really awesome but check this out because I AM DONE WITH THE AGGIE RICE PREVIEW AFTER ONE PARAGRAPH SO WHY DO I NEED TO FORCE 20 MORE?" Case in point, this next number. The third paragraph stressing that Rice should really do their damnedest to pressure Kenny Hill. See, if you can pressure the quarterback, that makes it... I'll let Michael tell you:

"Rice recorded one sack and four tackles for loss against Notre Dame. They will need to do much better than that against the Aggies offensive line if they want to slow the A&M offense down."

Mike's right about every single aspect of this game so far. There's only one place that I disagree:

Actually... I see it going a little bit differently.

"600. I think that's a fair yardage goal, Kevin." Jake Spavital makes his suggestion innocently enough while looking at his shoes and rocking back and forth, hands clasped behind his back.

"OK, Jake. If you want to limit yourself to that, that's your call. I just expect a little more moxie from you."

"No, coach, I think we just, you know, can win without being dicks about it."

"WINNING LIKE YOU SHOULD IS NOT BEING A DICK! SHOULD AN EAGLE NOT SOAR SO AS TO NOT SHAME THE LAND-BOUND? SHOULD A CHEETAH NOT RUN AT TOP SPEED FOR FEAR OF EMBARRASSING THE OTHER FELINES? SHOULD WE NOT ADD THAT THIRD DIGIT TO THE SCOREBOARD FOR SMU BECAUSE JUNE LEAVETH????"

And speaking of the MOB, GBH received a leaked copy of the controversial scatter band's Johnny Manziel formations planned for Saturday's game. Since Johnny's favorite symbol is the OVO owl, this seems like a fitting tribute. 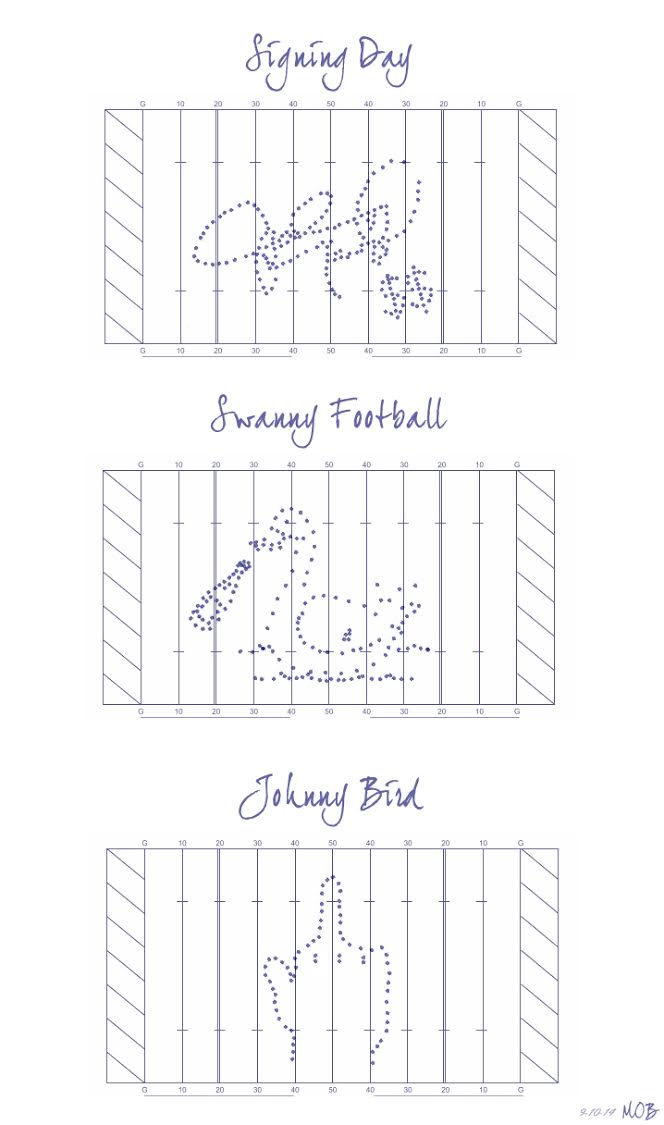 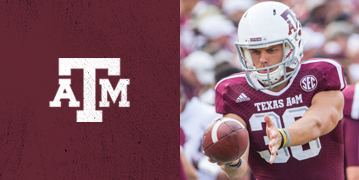 P: It's been too long since we've had you on the show, Drew. Been that kinda season. Let's relive some memories and execute another 76-yarder if you get a chance to punt on Saturday, mmmkay? 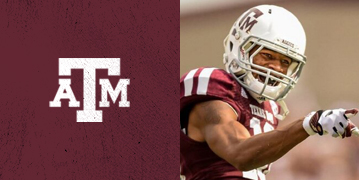 WR: We could devote two slots per week to Aggie WRs and still only get halfway through them by the end of the year, but Ed deserves it. Solid start to 2014 and he's tied for the team lead in TDs. Get out there and have fun. 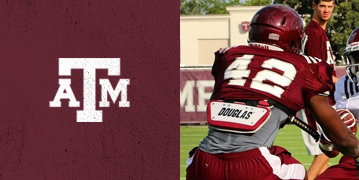 LB: Will little brother get to atone for childhood injustices? He's bigger now, and come the fourth quarter, we might see a certain reserve WR come over the middle...Will Mom & Dad be sporting blue or maroon? WE MUST KNOW, TV ANNOUNCERS. 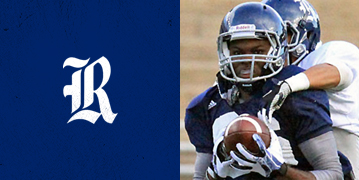 WR: Sound familiar? He's the older brother of one of our own. No catches yet on the year, but he had a breakout spring game. NO REALLY ARE THE PARENTS EACH WEARING DIFFERENT JERSEYS OR WHAT? 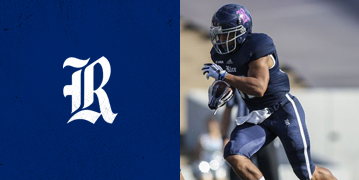 RB: Younger brother of Rice legend and current Arizona Cardinal Jarrett Dillard, and record-setting high-fiver. Seriously, I have never seen such sustained high-fiving panache, and for a good cause too. 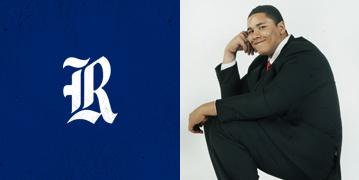 DT: Known affectionately by his sporting chums as "The Vancouver Vagabond," this robust Canadian is fond of causing havoc in opposing backfields. And also he's probably fond of hockey. Because Canada. 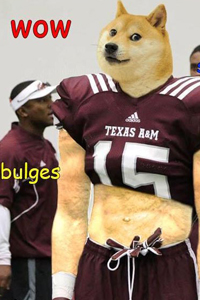 Overshadowed by all of Johnny's gesticulatin' last year was the fact that in a losing effort, Rice managed to hang 31 points, 509 total yards, and a whopping 306 rushing yards on the good guys. That was before a much maligned and underestimated 2014 Aggie defense came to town with a chip on their shoulder and Myles Garrett STANDING BEHIND YOU RIGHT NOW. TOO LATE YOU’RE SACKED. Expect to see this unit out to prove that they can take care of business at home, crack some heads, and join the PTA in your backfield because that’s where they live now. 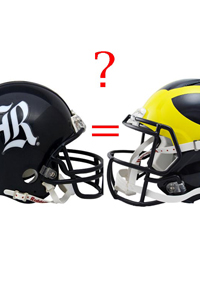 Rice opened up their season by politely losing on the road to Notre Dame by 31 points. Notre Dame then went on to embarrass Michigan in their final meeting EVAR by… 31 points. By the Transitive Property of college football, this means that Rice is as good as Michigan this season. More to the point you should know that, should the unthinkable happen and A&M manages to lose this game, Notre Dame fans will somehow become even more fucking unbearable. 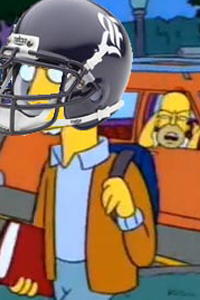 I can just see it now. Hundreds of them will put down their test tubes, take a break from splicing Zebrafish genes, and make the 7 ½ hour Segway drive to College Station if for no other reason than to point out obvious improvements that could be made to the structural design of Kyle Field. They will then probably make some comment to you about the Higgs-Boson, which after 3 days of reading Wikipedia and A Brief History Of Time you will realize was just an observation of your mother’s ability to both literally and figuratively sit around the house. By that time they will have left town and you will be left with nothing to do but voice your frustrations. 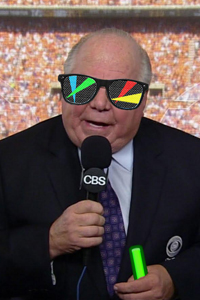 The SEC gobbled down their cupcakes last week going a perfect 11-0 in non-conference play and outscoring their opponents 550-126. This either confirms that the SEC is the greatest conference in all the land or proves how overrated and conspiracy driven it is, depending on your preferred narrative. Bob Stoops will attempt to continue his tale of Big 12 superiority by choosing the sickliest member of the herd, waiting until Mike Slive’s back is turned, and then devouring it on prime time. Really, Bob? They already had to deal with Derek Dooley, I think they’ve suffered enough. For actually interesting football all eyes should turn to the SEC game of the week when #4 Georgia visits #24 South Carolina. This game is worth watching just so you can imagine Stephen Garcia and Verne Lundquist popping molly and really feeling the Sandstorm. 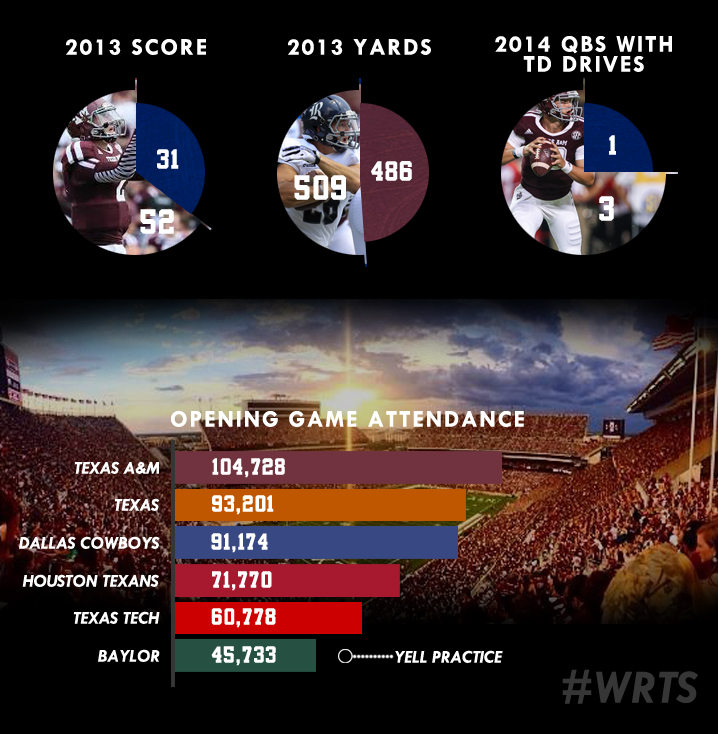 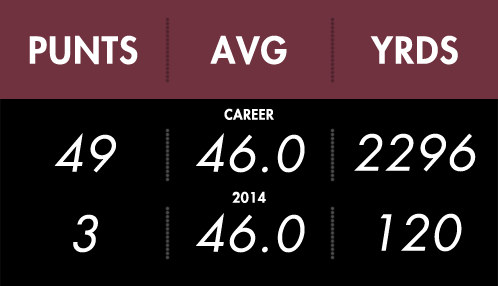 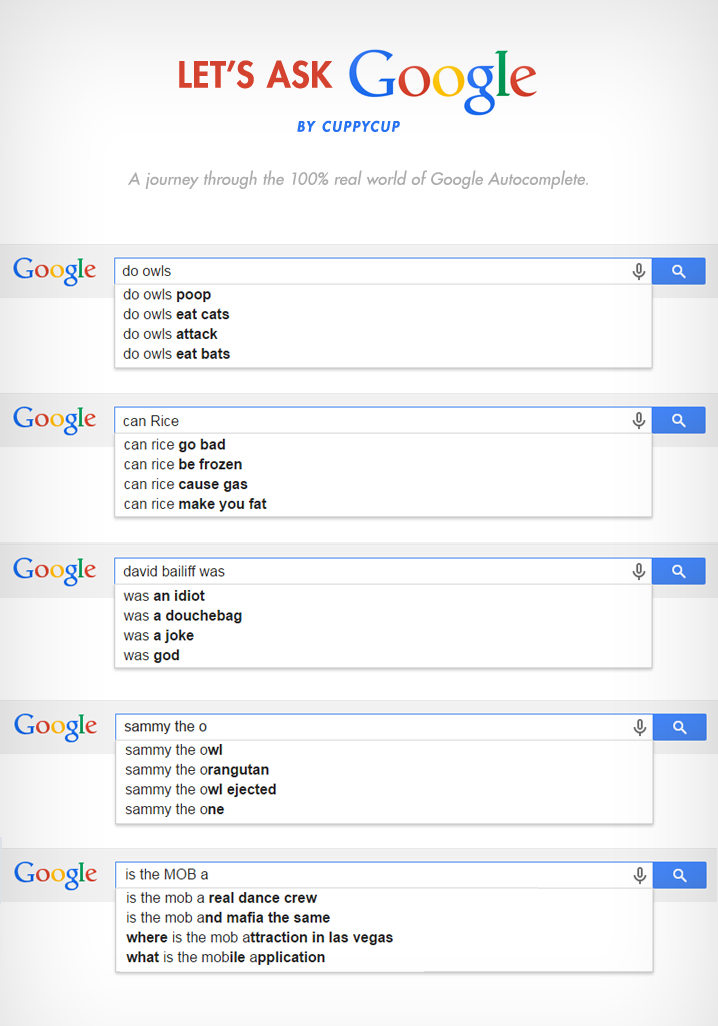 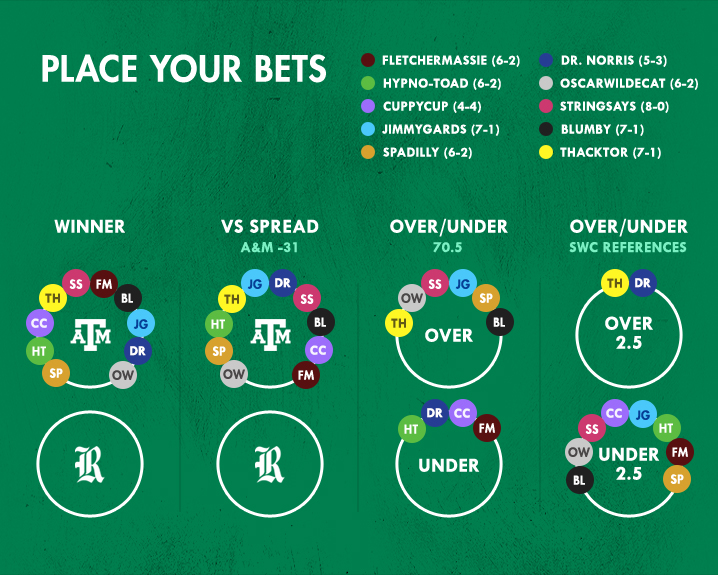 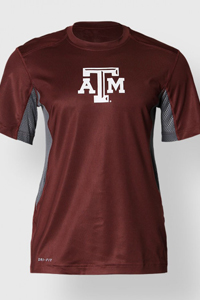 This Nike Pro Combat Tee from Aggieland Outfitters will keep you cool and dry during your impressive workouts or, more realistically, when you’re doing absolutely nothing on gameday but sweating like a pig in a pasture. The shirt has mesh panels in the places where you sweat the most (upper body only). Do you know what else has mesh panels? Kyle Field. It’s your time to be a walking Hate Barn, but people probably won’t call you a barn to your face.

Disclaimer: This is a hypercool shirt, not a hypercolor shirt. If this disappoints you, you’re probably already writing for THE TAILGATE.

Text GOODBULL to 55000 on 9/10 for a chance to win a Nike hypercool tee from Aggieland Outfitters.

I don't even know how to write these anymore. Sumlin's ability to coach has exceeded the limits of my imagination.

Aggies win by 21 after an extended lightning delay. Lightning delays become a tradition. Hill throws a pick. Myles only records 2 QB hurries. Watts only gets one bone-crushing hit to watch in slow motion. The E. King Grill runs out of ice. Sumlin doesn't tweet YESSIR this week. 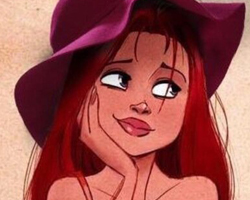 Kyle Field will be the largest hibachi grill in the world on Saturday night. 109,000 people are going to watch Rice get fried. #GBHTailgate 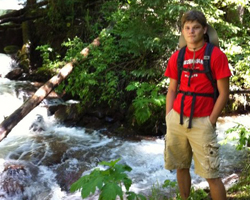 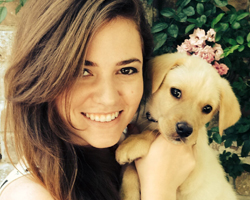 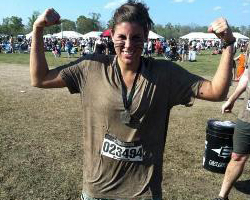 I lost my boyfriend to the #GBHTailgate 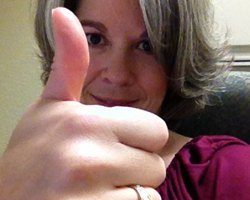 Last week they all talked about us playing cupcake teams. And now we get a rice cake. #GBHTailgate 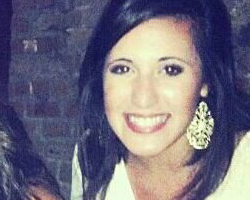