Geoff Ketchum writes about high school recruiting and college football for Rivals.com. He hosts a show on Yahoo! Sports Radio. Despite his impressive professional credentials, Ketchum made no apparent effort to collect further information before implicating Aggie freshman wide receiver Speedy Noil for a crime. 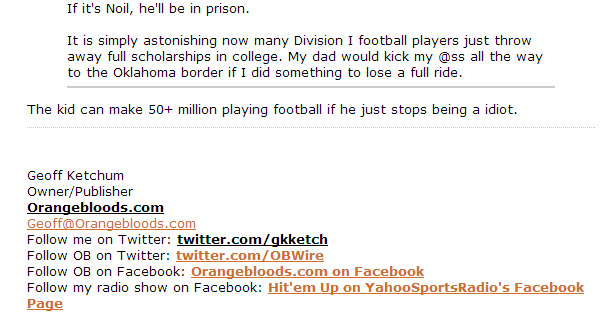 Ketchum's tweets are in response to a Bryan Police Department search for aggravated robbery suspects, which was first publicized by Brent Zwerneman of the Houston Chronicle. This report led to rumors on Aggie message boards which Ketchum seemed to accept as fact without vetting any sources.

Previously, Ketchum indicated great pride in having signed the Rivals Code of Ethics:

@gkketch: Each publisher signs a code of ethics contract @Rivals. No wearing school colors or season-tickets or being a fan. Firing offense

If the dangerous practice of identifying student-athletes in criminal investigations without any substantiation is not covered by the ethics code, perhaps it's time for an update.

While we do not have specific details concerning the Bryan PD investigation, it is clear that Ketchum's assumption of an arrest was baseless.

Here are other recent tweets from Ketchum concerning Aggie arrests:

Memo to A&M fans... don't be mad at the messenger. Not my fault dudes can't stay out of jail in large numbers.

Speaking of A&M arrest memes, I'm going to post this one and run for cover https://t.co/bENkWobaNm