Let's take a look at what's left after Golden and Claiborne were dismissed from the Aggies.

I go back and forth between being angry at both Golden and Claiborne to feeling a pretty deep level of sadness for them. I'm angry because they squandered their opportunity in the worst possible way, and because they left Aggie Football in a pretty difficult situation for next season.

I feel sad for them, but not in a sympathetic way, mind you. They got themselves into this mess and good riddance to bad apples and whatnot. Instead, I'm sad because both had NFL talent but now each is merely a statistic. I get even sadder when I think about the fact that both have young children who are now going to spend a decent amount of time without their fathers. The entire situation just sucks on multiple levels.

And while what's going on with them is bigger than football, I'm going to focus on the football part of it. Losing the two of them leaves a pretty big hole in our defense—a group that struggled mightily last year. Let's take a look at what Texas A&M's post dismissal defensive roster looks like: 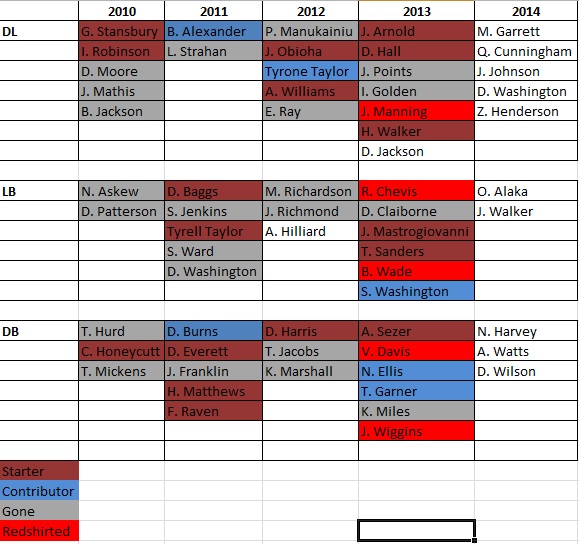 I've had this spreadsheet for a while, so pardon me if I missed anything. Let me know in the comments and I'll make corrections. Here are some quick thoughts:

Part of me wants to believe that Snyder will somehow adjust to the personnel he has, but he is who he is. We are still going to have exotic blitzes, and we are still going to require our players to play on an island...regardless of position. Here's hoping that our new enrollees are able to pick up the defense quickly.

Those are my thoughts. Take a look at the spreadsheet and let me know what you think about A&M's 2014 defensive outlook in the comments.