If Twitter fights with Longhorn writers are your cup of tea, here is the transcript of the most recent dustup between the GBH account and Geoff Ketchum.

@gkketch: In the 9 sports that feature head-to-head action, Texas has a combined 750-355-14 record all-time against Texas A&M. Nearly 70-percent win %

@gkketch: The math suggests that the Aggies run out of time against Texas nearly 7 out of 10 times across all sports. #science

@gkketch: Lot of moral victories taking place in my mentions...

@GBHunting: Would you say you hold a moral degree from UT?

@gkketch: Yup, me, Michael Dell and Kevin Durant all hang out together.

@GBHunting: Moral celebrity status too then?

@gkketch: Love when A&M fans want to dog other media folks when they are so quick to ride for a guy like @HopWebsider...

@gkketch: That would get a publisher @Rivals thrown out of the network.

@GBHunting: If Rivals has shown anything, it’s that homerism isn’t tolerated.

@gkketch: Each publisher signs a code of ethics contract @Rivals. No wearing school colors or season-tickets or being a fan. Firing offense

@gkketch: Say what you want about my world-class trolling, but we're not wearing school gear, cheering on the sidelines or acting foolish

@gkketch: Does YOUR group sign a code of ethics?

@GBHunting: I did not sign a completely hollow code of ethics to use as a moral high ground, no.

@GBHunting: what about trash talking to recruits? is that in the code of ethics?

@GBHunting: ever hear of Matt Davis?

@gkketch: lol. What about him?

@GBHunting: weren’t you tweeting him about being overrated and some HS incident?

@GBHunting: is "clowning" exempt from the code of ethics you cited? 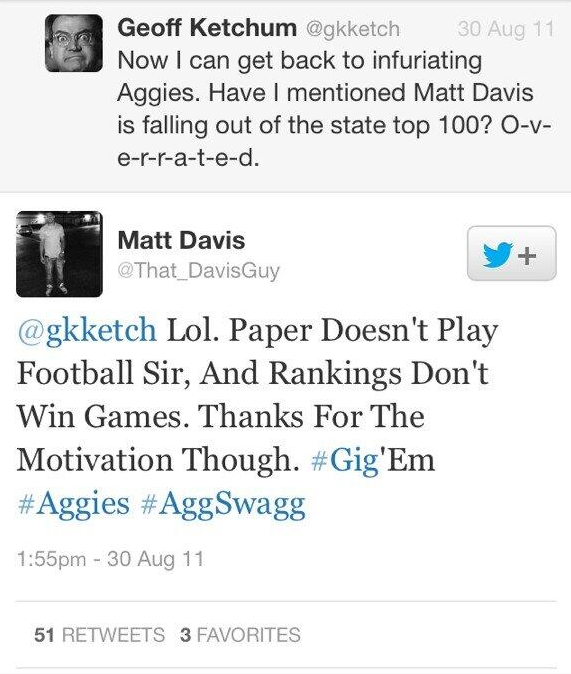 @GBHunting: do you feel you uphold these pretty well? 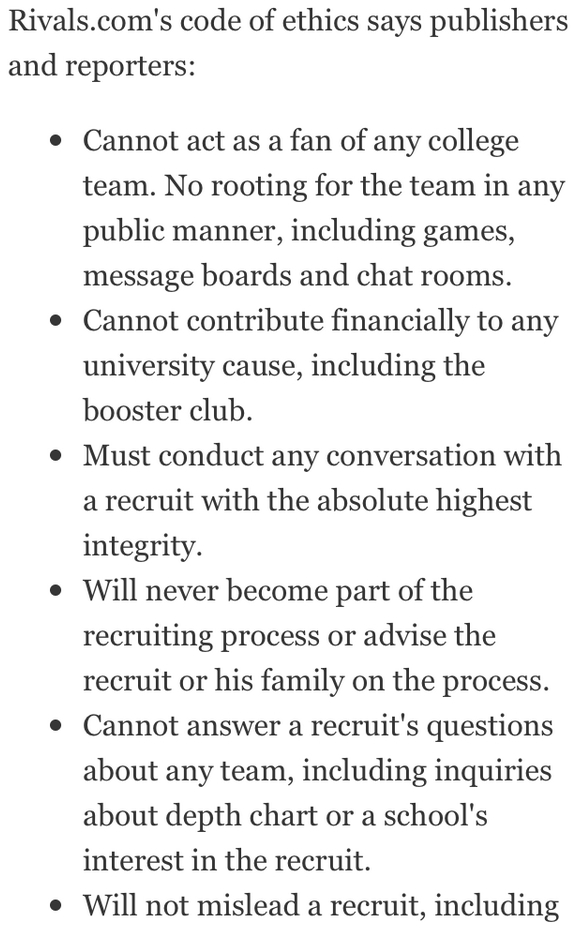 @GBHunting: Code says misleading recruits is not a good look

@gkketch: again... you realize that was a joke, right? I thought you were better than falling for the banana in the tailpipe.

@GBHunting: I'm aware it was a trolling attempt. How does that fit in with your "not a fan" portion of the code of ethics?

@GBHunting: do you name recruits in a lot of publicly made jokes?

@gkketch: When they are completely over the top and obvious to most to be exactly that. You realize he never fell of of the top 100, right?

@GBHunting: Your ethics only concern positive fandom, I take it. Do you think you "act as a fan" of the Longhorns in your online interactions?

@GBHunting: Not at all. I understand why you wouldn't understand the difference...

@GBHunting: is this the type of "cannot act as a fan" analysis your code of ethics is aimed at upholding?

@GBHunting: actually the worst things are your hilariously inaccurate predictions and post-hoc revisions of recruiting evaluations

@gkketch: I nailed most of my Aggie predictions for about 15 years straight from 1996-2011. Missed only a few. How about you?

@gkketch: OMG. I'm so crazy for thinking the Texas job search would be bananas. GOT ME!!!!

@gkketch: Seriously, these folks sit around thinking THESE are gotcha moments.

@GBHunting: this is my favorite thing today. I bet people aren't paying Dan Ruiz for his writing. 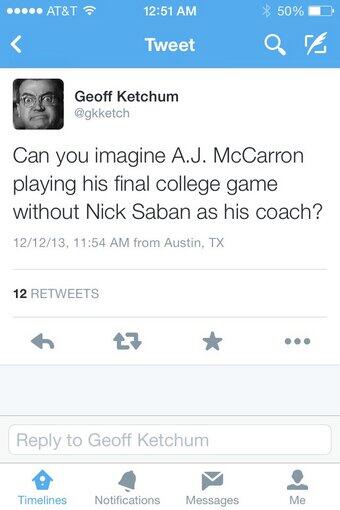 @gkketch: Ok, I'm officially bored. I thought the jousting would be better than this. Matt Davis tweets? lulz

@GBHunting: My mistake. I missed this journalistic gem from non-fan @gkketch 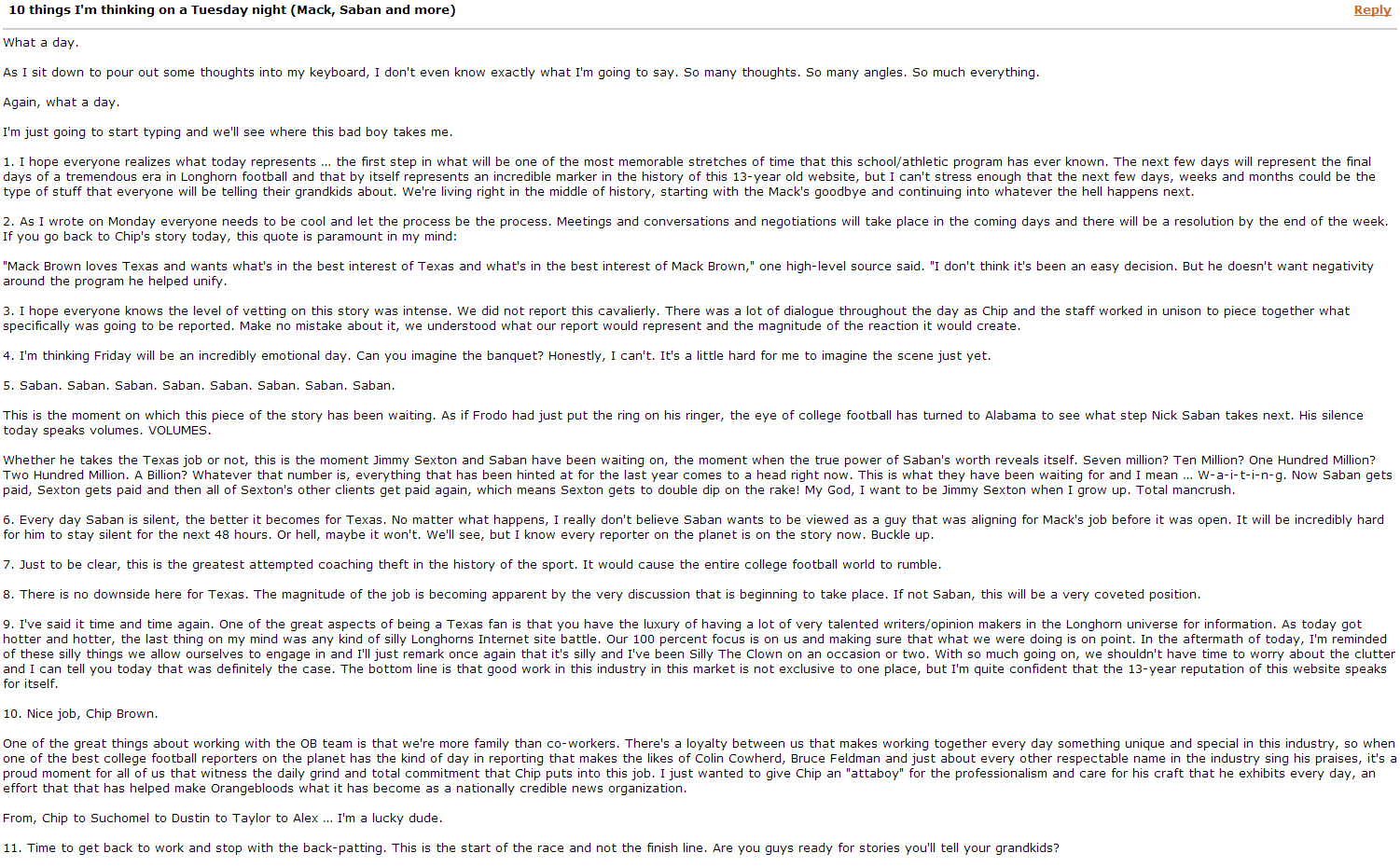 @GBHunting: Calling out @HopWebsider for being a fan was just an unprecedented level of hypocrisy, even for @gkketch.

@GBHunting: Disclaimer: I am a proud fan of Texas A&M and will not pretend otherwise or claim superiority because I signed an online ethics form.

@gkketch: Matt Davis finished 18th in the 2012 LSR rankings, but don't let that get in the way of being an idiot. 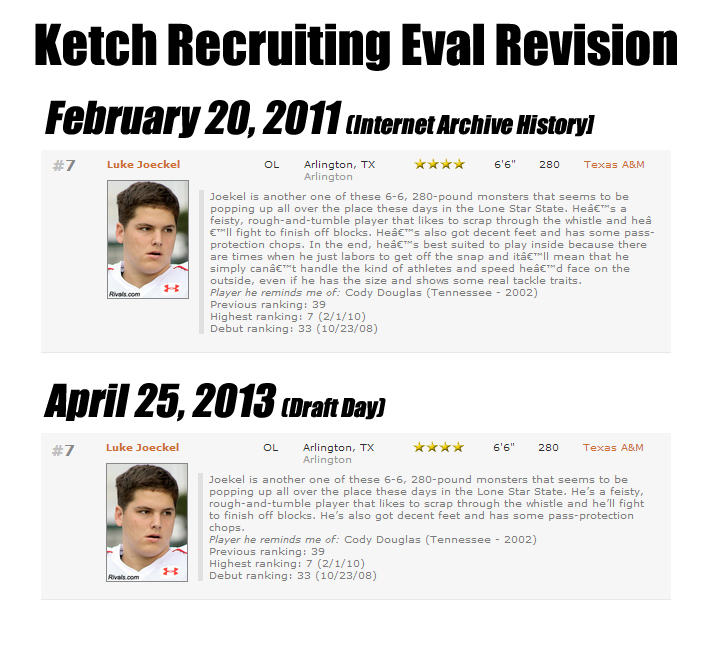 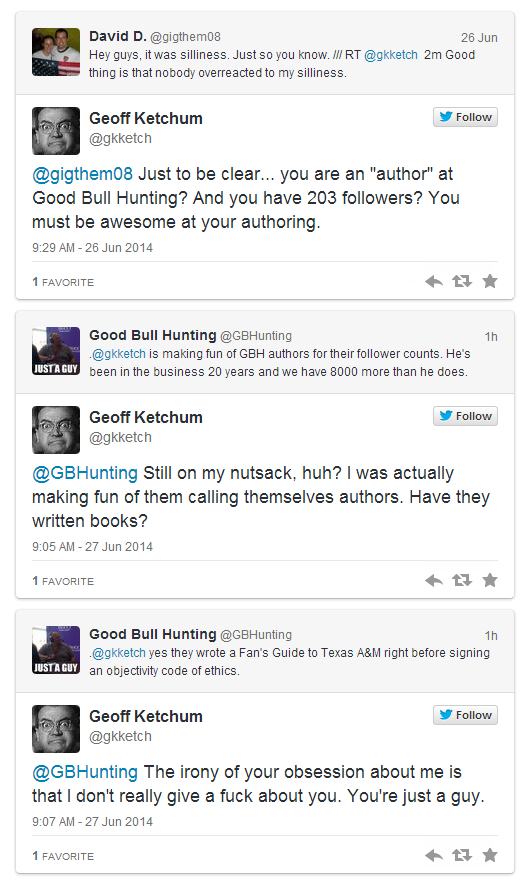