The mid/late 2000’s were not kind to Texas A&M football, as the Fran debacle and a 10-15 start to the Sherman era left even the most die-hard Aggie supporters feeling jaded. And with many pointing to 2010 as a "put up or shut up" year for the new regime, Von Miller (who led the nation in sacks as a junior) elected to stay at A&M for his senior season.

It was a huge boost, and it had a marked impact on the fans’ expectations.

But for the first half of 2010, it looked like a bad decision. Von’s individual numbers suffered, and the Ags stumbled to a 3-3 start punctuated by a 30-9 home beating at the hands of Missouri. Things were looking pretty grim, but a QB change led to a comfy away win in Lawrence and a relatively easy home victory over Tech. Suddenly, we had a bit of momentum headed into a home tilt with #9 Oklahoma.

I’ll never forget the energy that night (ARGH why don’t we have big night games anymore????) as we walked into the stadium. The energy was palpable. You could palp it. Everybody had collectively realized, "This is it. It has to be tonight, or another coaching search begins. It has to be tonight."

And it was a dream start. An errant OU snap went through the endzone fifteen seconds into the game, and after a quick TD drive the good guys had a 9-0 lead before many had found their seats. The rest of the first half was unremarkable, with one notable exception.

The Aggies were unfortunate to only be up 12-0 at the break, but when Coryell Judie took the second half kickoff to the house many in the stands started dreaming of a defining victory. Which, naturally, meant that OU immediately rolled 17 unanswered while we all cursed ourselves for daring to hope.

The offense did get their act together in the 4th, however, and big plays by Cyrus Gray and Ryan Swope (along with terrible special teams by OU) pushed the lead to 33-17.

Another turnover on downs (YES) followed by a blocked punt (Noooooooo) led to a bit of late drama, but with the Sooners threatening to keep the game alive Von broke through the line to stone Demarco Murray and put the game on ice.

The crowd, the towels, the everything about those goal line stands was incredible. But the night was made even more special by Von getting the final say. Analysts had questioned his decision to stay at A&M, but anyone who saw the look on his face during the War Hymn (and subsequent "Wrecking Crew" chants) knows he made the right call.

If there’s one downside to the Johnny experience, it’s that Von only had one year to carry the "most nationally recognized A&M player" torch. He represents us well, and here's hoping for a monster rebound year in 2014.

A quick note for you younger fans: Texas used to be good at football. Really good. I know it’s hard to fathom, but people didn’t make fun of them or anything.

I was hoping we could avoid Fran altogether, but this moment deserves its spot in the sun.

Nobody gave the 2006 Aggies much of a chance when their option attack rolled into Austin to face the #11 horns and their #1 ranked rush defense. Sure, the good guys had only lost their three games by a total of six points… but they had also struggled to eke out close wins over Kansas, Army, and a pre-revival OSU. It was a weird year, full of extremely close games.

And they didn't stop here. The first three quarters were very tight, and when Stephen McGee took the field with eleven minutes remaining the Ags were only down one. Eighty-eight yards from paydirt.

What followed was a brutal, methodical, and very direct onslaught against the vaunted sip run defense. 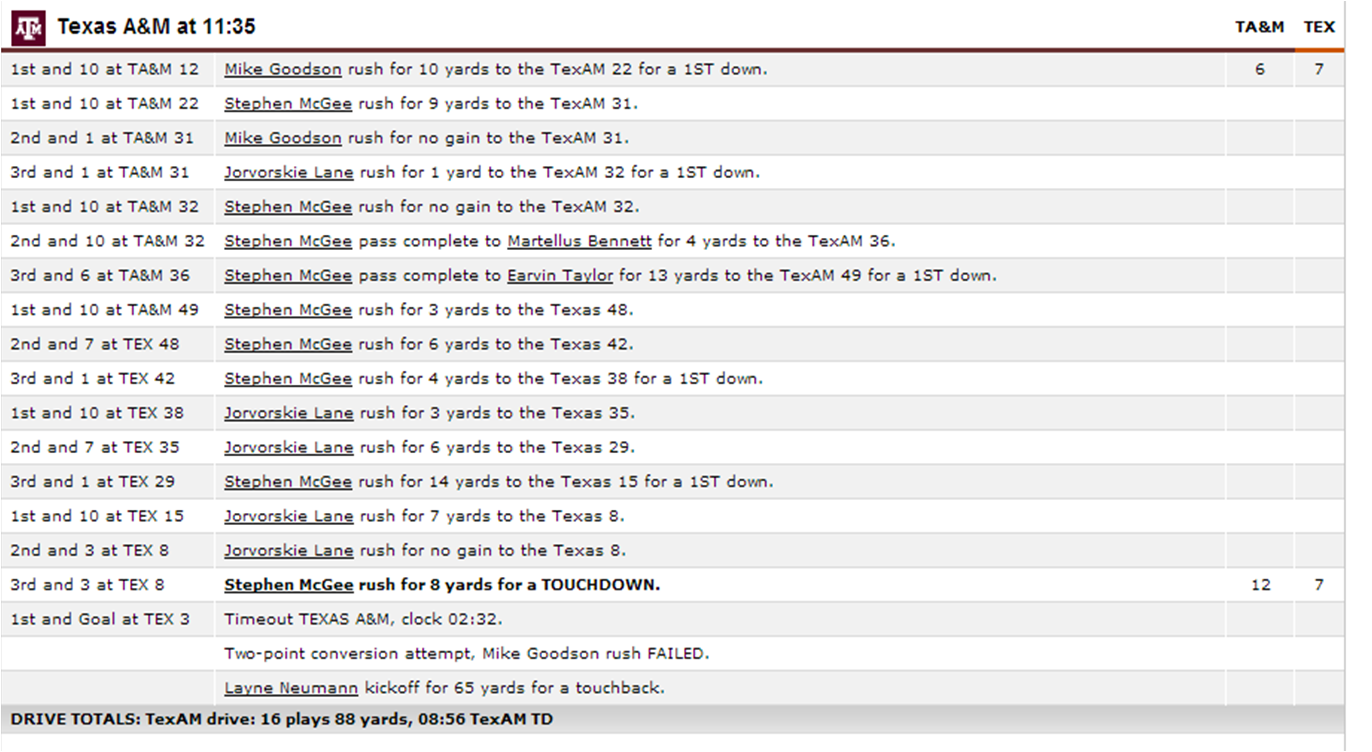 And McGee himself punched it in from eight yards out.

A Mark Dodge interception and a Michael Bennett Cart-ing closed the game out for the Aggies, who finished the regular season 9-3.

Why is an Aggie’s favorite time 6:48? Because it’s twelve to seven.

Earlier in the series we discussed the home beating of the hated sips, and the reward for that win was A&M's first visit to the Cotton Bowl in 18 years. The opponent? Bo Jackson and the 8-3 Auburn Tigers.

The Aggies built a 21-16 lead after three quarters, but a sustained Auburn drive moved the Tigers down to the Aggie six. And with a fresh set of downs, AU dialed up some inventive playcalling:

The three carries gained four yards in total, and on 4th and 2 Pat Dye pulled unveiled the trick play he'd been waiting to unleash all day:
Here's a fun look at 2nd-4th down, which was apparently filmed with a potato

Auburn quickly got the ball back, however, and found themselves at the Aggie 27. But again, another 4th down situation reared its ugly head, and this time Dye ran a play that fooled the entire country:
The A&M defense broke it up, and Kevin Murray engineered a late drive to put the game away.

A second quick note for you younger fans: We were really good at men's basketball for a few years. So good, in fact, that fans attended games in person and you could follow the team's adventures on a TV station called ESPN.

The 2006-2007 season was an exercise in acclimation. After years and years of irrelevance, Aggie Basketball fans had to quickly adjust to phrases like "Pre-Season All American Acie Law," "Top Fifteen Pre-Season Rank," and "Contender to win the Big XII."

But we were learning, and by the time the business end of the conference season came around we could discuss topics like "will we be a two or a three seed this March" without grinning like idiots.

Well, kind of. As much as we'd like to believe we were pulling off the sophisticated "we're used to big time basketball" look, a visit to Allen Fieldhouse and the #6 Kansas Jayhawks knocked any calm/collected pretense out the window. This was the big time. Nationally televised, at the Phog, with Dickie V in the house. Against a team that was 31-0 against the Big XII South at home.

The Jayhawks played the part of "team who had been there before" for most of the game, building a ten point lead with 6:22 remaining. But Acie led the Ags on a 12-2 run to tie the game with a minute left.

After a Jayhawk basket on the ensuing possesion, BCG called a timeout.

"It was (Law's) game at that point," Gillispie said. "He told me he wanted the ball in his hands."

48 hours later, we dropped 100 on the sips at Reed for an encore. Man, that season was fun.

Note: I won't cover the entire game here, as we will re-visit this event closer to #1.

It was back, and it had never been stronger. As the Alabama Crimson Tide rolled down the field late in the fourth quarter, I started re-hashing the crushing A&M football blows of the past two years. Over and over again. I couldn't stop. I was a sad, college football-esque Arya Stark.

And there, right in front of my eyes, with our biggest audience yet, with our old Big XII spurned lovers waiting to unleash their barrage of "A&M to the SEC lol" jokes, it was all happening again.

And there was nothing we could do to stop it.

Or so we thought.

Who knows what happens without this play. Does Johnny win another big game? Does he win the Heisman? Does our SEC momentum stop dead in its tracks?

We're getting close, everyone. There are only ten moments remaining, and each will be better than the last.

Hoping to see anything specific next week? Any preliminary guesses for moment #1? Hit the comments below.