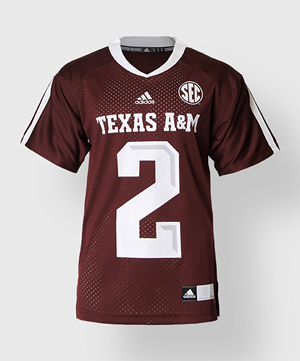 USA USA USA. The soccer team played in the rain against Germany and lost but advanced because the team they tied beat the team they beat or something ROLL WORLD CUP. Spencer Hall with the Americanest of American reactions and we hope everyone got their naps.

'Crootin power. Another look at the latest recruiting trends in the state of Texas.  Not to worry, though, horns: you're now the "Frontline Soldiers" in the "New Texas Recruiting War" and here's the beautiful graphic that proves it.

Real football talk, like about offensive strategies and stuff. Here's a look at how collegiate offenses have impacted the NFL recently, featuring a few familiar names. Not sure about the "rocky first year" for Kliff, though. 8 wins and a Holiday Bowl victory is a pretty good first year in Lubbock.

THANKS AGAIN ATHLON. They ranked the 25 best running backs in the conference heading into 2014, and Tra Carson's at a respectable #15 in an extremely RB-laden conference but PAWWWLLL HOW YOU GONNA RANK TREY WILLIAMS AT 24 BEHIND 2 KENTUCKY PLAYERS ISSA CONSPEERASEE I TELL YOU I'MMA HANG UP AND LISSEN.

That's one more week of summer gone, folks. Have a good one. Get down.

We didn't forget your dose of EZ. What do you guys think?