A scouting report that's supposedly from the New England Patriots organization was released today, and it had some pretty scathing remarks about Johnny Manziel. Below is an excerpt from one of the harsher sections:

JL 10/15 - Suspended first half of TXRI game for autograph scandal. Couple of TXTC sources say can't yell/scream at him or he shuts down; has walked away from Kingsbury in the past. Has an avg. work ethic, came to 4 of 32 summer '13 workouts, and quit going to in-season workouts late in '12. Doesn't study the game, said to know about 60% of the offense in '12, never watches film; one source said only time he watched film during '12 was before ALUN. Comes from 'outlaw bloodlines', mom moved the family to Kerrville to get away from father's wild family. Father's family is said to be very shady people, always into something, they are the root of Johnny's personality. 'What you see on TV and how he is portrayed, that's him; but when you talk to him, you'll like him'. Coaches love his tuffs/competes, they want to go to war with him, but 'Johnny will be Johnny' during the week. Knows how to scheme the system, arrogant and full of himself, but he's not smug to coaches. Has been like this since Day 1, has never gone to class, goes to beat of own drum, but has ultimate confidence. Loves the spotlight, football is his release, big games don't scare him. Has size 15 feet and freakishly big hands. Will drink, but no one I spoke with think he's a smoker. Teammates don't dislike him, but there's some resentment, more so in the offseason when he isn't coming to workouts and they are busting their butt. Loner, doesn't hang out with the guys, but very close with WR Mike Evans. Already has money, is used to spotlight, has already been exposed to NFL-level fame. Will never take football seriously enough for our coaching staff, he'll hate meetings, will have to drag him to work out, etc. The definition of the word maintenance. CONCERNS: Maturity, passion for preparation, high-maintenance, work ethic

While I'd like to instantly dismiss the source for this story, BroBible.com has actually pushed some reliable information in the past. Deadspin also decided to run with this story, but I don't put to much stock in that, as I witnessed the hilarity the day they ran with a fake tweet from Joe Schad to Erin Andrews that took all of 5 seconds to dismiss. It should be noted that the author for both stories is Deadspin writer Tom Ley, who is pretty much just a quick to post pageview whore. He's obviously got good communications channels to fact check his information:

@JManziel2 We wrote about the Patriots' scouting report on you. You're welcome to respond. http://t.co/y2FEiX63C4

The first thing that stands out as potentially fake is the logo on the document:

In July 2013, the Patriots released their new logo. If you've ever been at a large corporation, you know that there are ridiculously large documents on file that classify the usage for logos on every piece of paper used for employee activities. It's almost ridiculous how serious people take it, but my experience makes me assume that Pats letterhead would follow suit by using the new logo.

A better source of information on this has been Jeff Howe, New England Patriots beat reporter for the Boston Herald. He first tweeted out that the scoring system used on the form isn't correct:

He went on to clarify further by using an article where writers were given a look at the Pats draft process. As you can see, the scoring system is way more complicated than a simple "6.5". 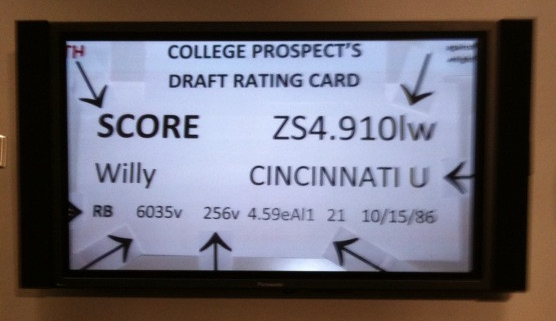 So is this thing a fake? Probably. But we won't know for sure until the Patriots make some kind of statement.

Welcome to your new life with Johnny Manziel, Browns fans. If you're feeling low, feel free to consult the experienced support groups at TexAgs.com.