On May 8th two Good Bull Hunting enthusiasts decided to drink all of the booze in the house and then describe the NFL draft as it happened. If you are seeking actual information and analysis, seek elsewhere. Hypno-Toad and redfluorophore present: The NFL On Draft

Share All sharing options for: The NFL On Draft: 2014

After 14 straight months of mock drafts and analysis, we are finally almost to the moment everyone has been waiting for.  We have started off the boozing while we wait for them to finish trotting all of the invitees out like a Little Miss Sunshine pageant.  This is a veritable Who’s Who of terrible suits, as though all of them were shoved into Michael Irvin’s closet and told to get dressed in the dark.

A quick word on the two Smirnoff Ices in the refrigerator.  We were disappointed last year that we were not forced to pay the ice for Manti Te’o going in the first round, so we have brought it back.  This year we decided that if either of our teams – the Cowboys or the Texans – drafts Johnny Football we will drink the "icing on the cake" in an effort to prepare for years of mixed feelings about whether this was a colossal mistake.

Hypno-Toad:  Clowney was so sure that he would be picked first overall that he started slowly walking towards the stage 8 months ago.

redfluorophore:  Of course they show the highlight against Michigan instead of the one where he just stands there and does nothing. 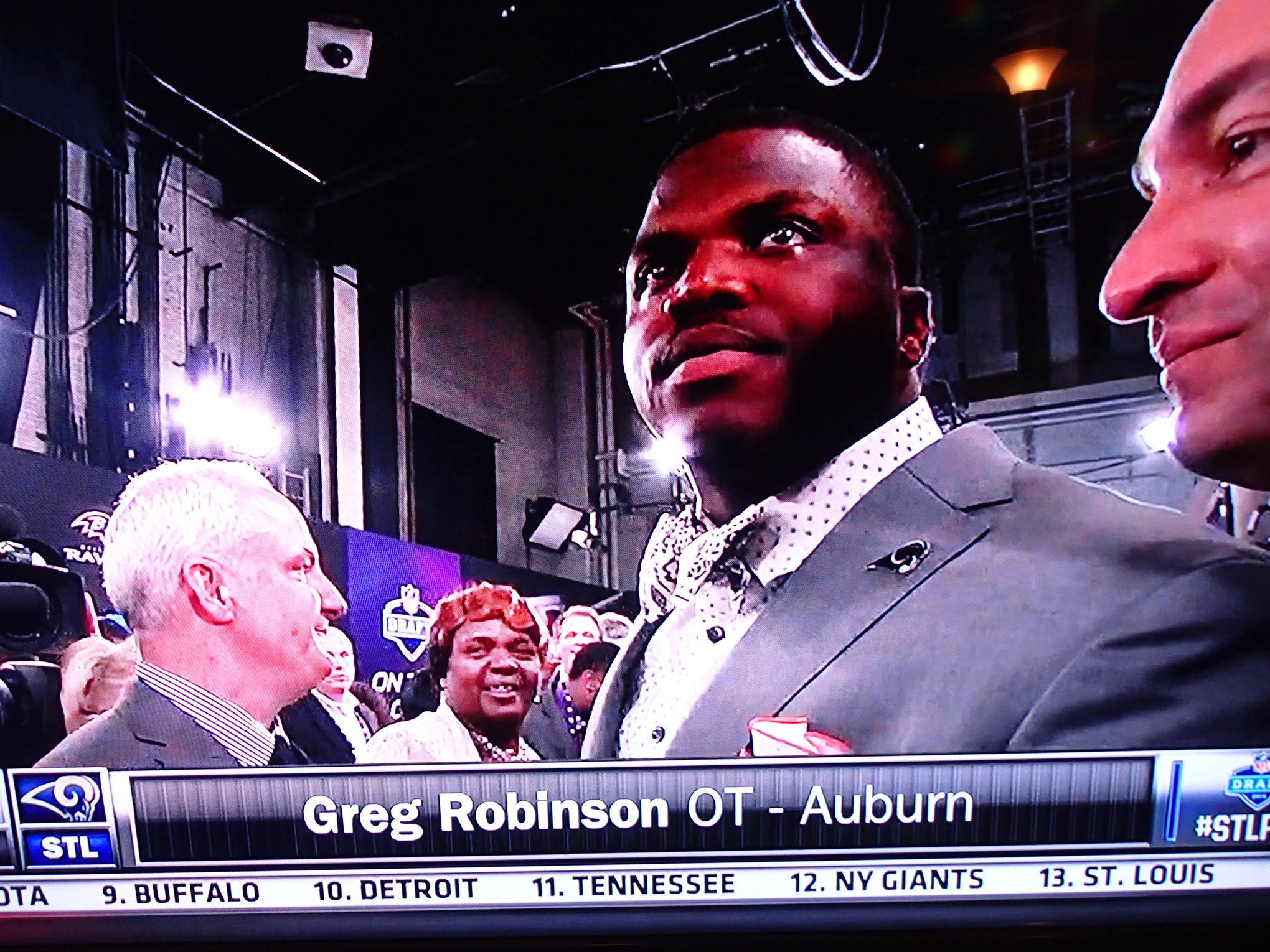 RF:  I think he may be wearing a cuttlefish as a bowtie.

[collective cry of joy for Johnny]

HT:  Not only did he shred a defensive stalwart like Baylor, he also held his own against the rest of the AARP conference.

RF:  Everyone keeps comparing him to Ben Roethlisberger and we’re still not sure if Ben is any good.

Current beverage: Unibroue La Fin Du Monde.  French for "The End Of The World", this seemed appropriate as Johnny’s world comes crashing down.

RF:  You think he’s excited to live in Canada?

HT:  The only real problem here is that Buffalo fans are so far removed from the south that they might not even realize that fuck Clemson.

RF:  Mack plays with a lot of violence, which makes Oakland a perfect fit for him.

HT:  It was difficult for the Raiders to make their usual stupid move because so many of the stupid moves were already taken.

RF:  This guy looks like a solid player, but I’m worried he doesn’t have the pedigree.

HT:  As a structural engineer I worry about the hurricane wind forces exerted on tall buildings like Evans.

RF:  Tampa Bay made exactly the right pick, which is something that they haven’t heard since 1982.

RF:  Gilbert is heading to the only place worse than Stillwater.

HT:  I’m glad because neither Johnny nor I was going to look good in a Browns Manziel jersey.

HT:  Like everyone in Radio City Music Hall, I have no idea who this guy is.

RF:  This pick is as dull as Minnesota. 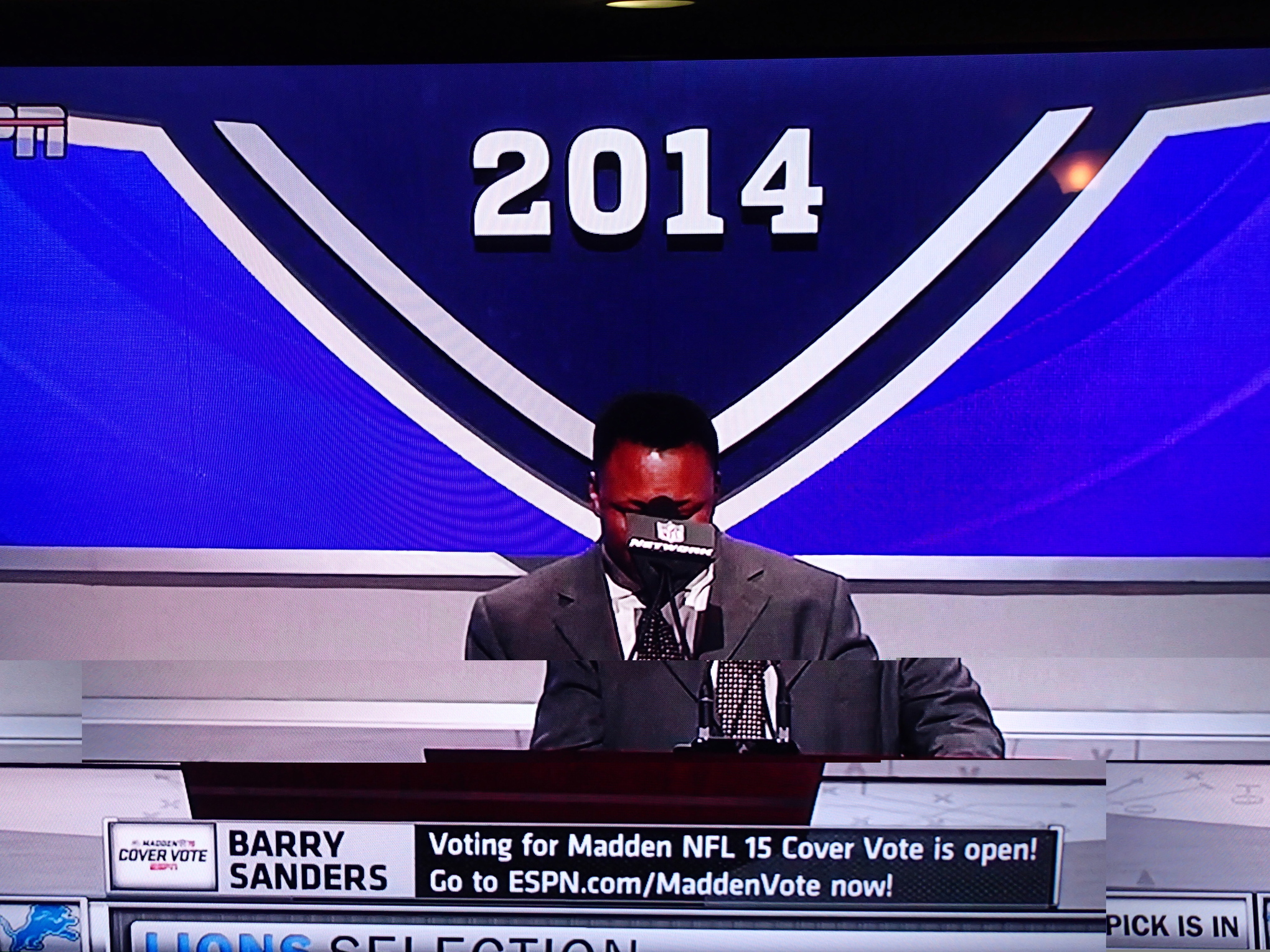 RF:  FINALLY Matt Stafford has a big target to throw to. 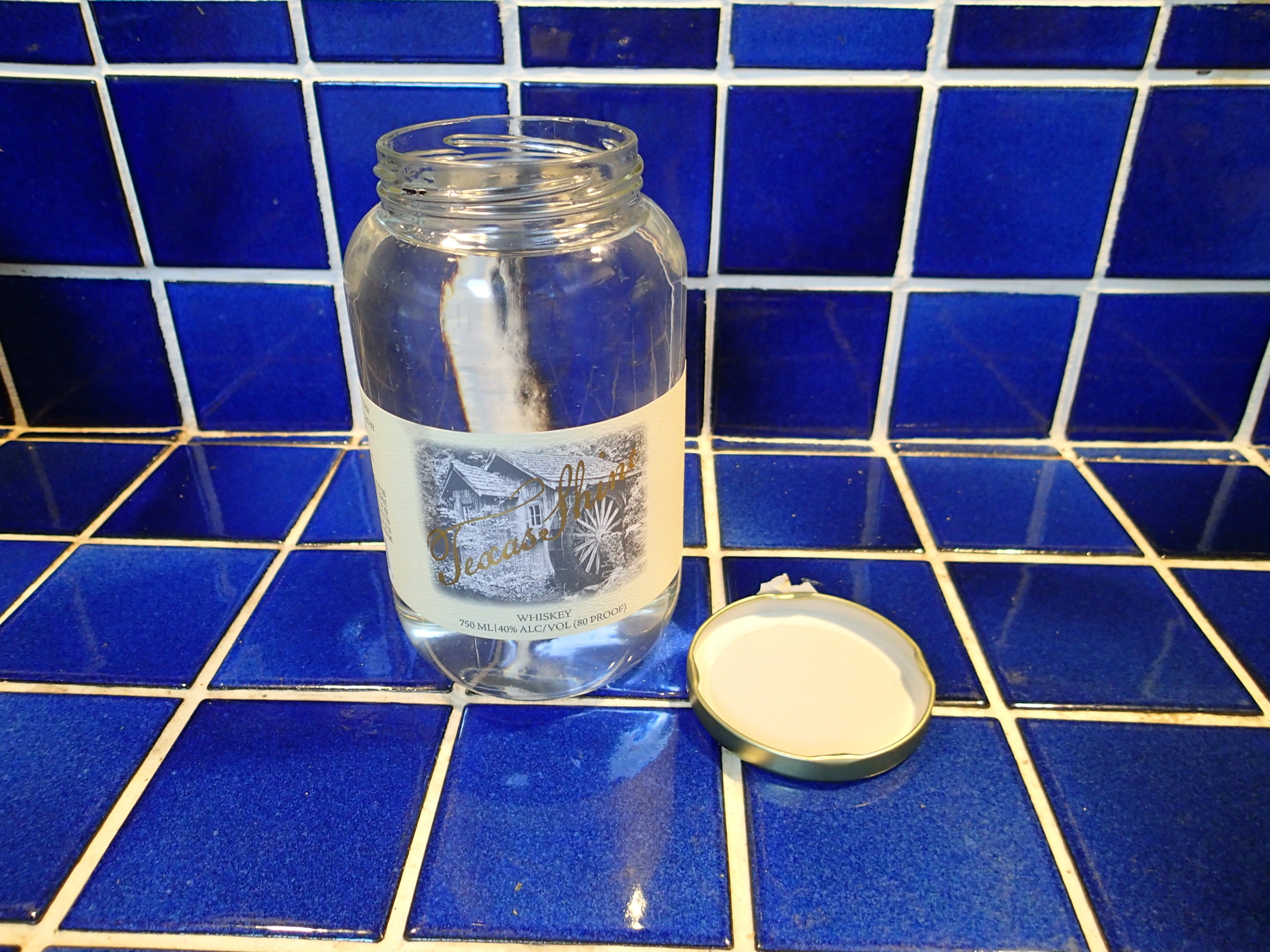 Current beverage: What more fitting drink for a pick from North Carolina than a bracing shot of moonshine.  I have had my run-ins with the real thing and this is not it.  The label says it was "bottled" in Carrollton, TX, which means that it was most likely made by a soccer mom on Pinterest while she waited for her kids to get out of Pilates class.

HT:  Adam Schefter is about to have a stroke because he thinks Johnny is going to Dallas.

RF:  The cry of relief from this Texans fan that the traitor Titans didn’t take Johnny was deafening.

HT:  When a player moves from Baton Rouge to New York nothing can possibly go wrong.

RF:  A QB who blindly heaves balls into the air needs the best wide receivers money can buy.

HT:  A player from Pitt was selected ahead of Johnny, which means this might just be a hallucination inside Spilly’s head.

RF:  I don’t know who this guy is, but I don’t need to know because he plays for St. Louis.

RF:  Any player that can maintain that level of focus while ignoring Frank Beamer’s goiter must be good.

HT:  The stage is now properly set for the Cowboys to continue to crush my soul.

HT:  Once again Jerry Jones electrifies the fan base with a perfectly sensible pick because he knows that 9 wins will get you sheep to keep filling the stands.

RF:  I hope you are as disappointed as I was.

Current beverage: Buffalo Bayou More Cowbell.  If China were overpopulated with hops instead of people, it would be this beer.

HT:  Do you have any idea how much money this guy will make now?

RF:  As much as he made in college?

HT:  I’ve said it before and I’ll say it again, Pryor is on fire. 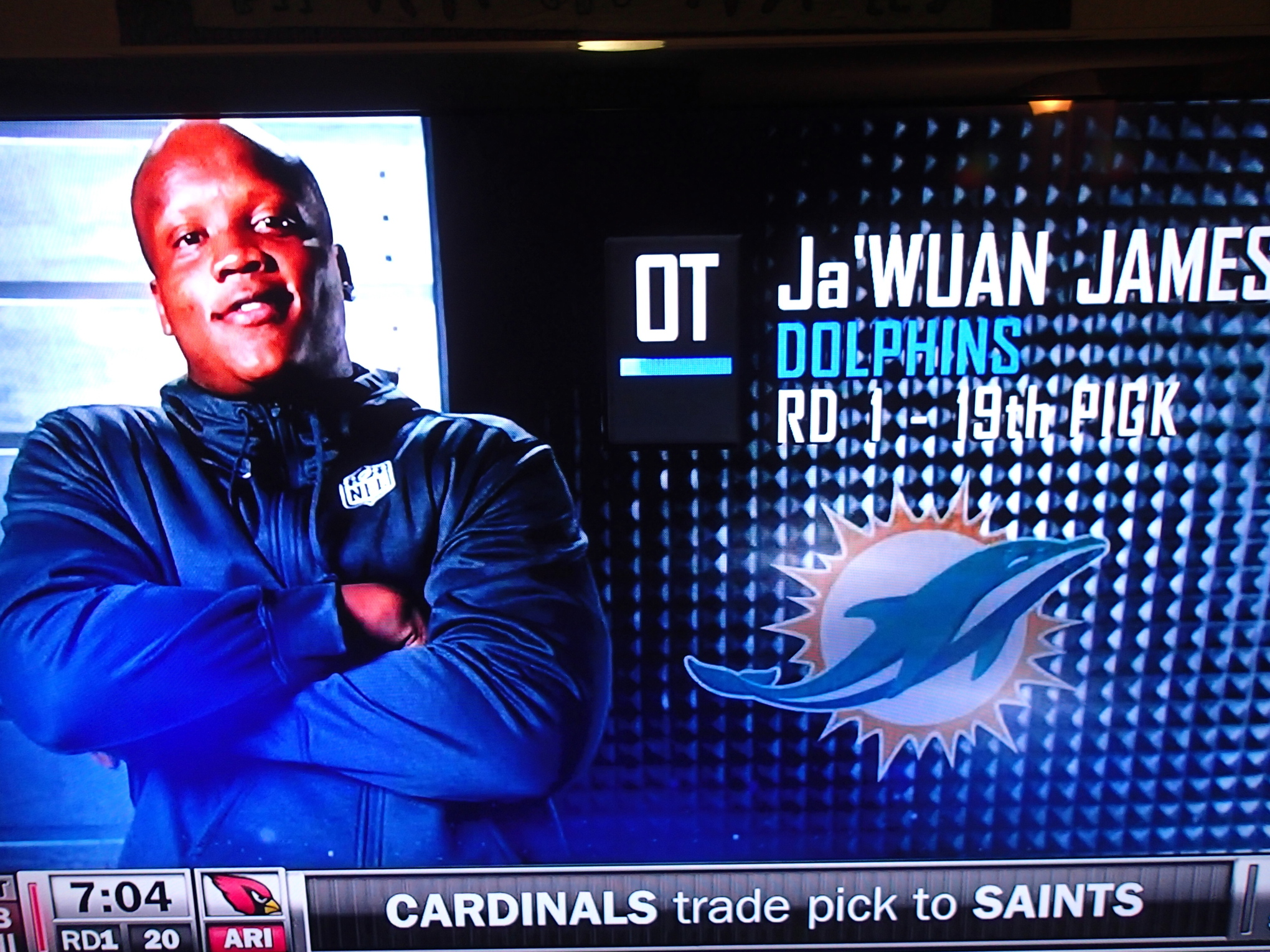 RF:  There seem to be a lot of players suffering from alopecia these days.

HT:  Incognito has already texted this man about the promiscuity of his mother.

HT:  It’s good to know exactly which players I will be watching the Cowboys ineffectually defend next season.

RF:  Brandin is only smiling because he doesn’t realize that the streets of New Orleans aren’t paved with marijuana.

HT:  There is nothing funny about Ha Ha Clinton Dix.

RF:  This is a fantastic pick at 21st overall.

HT:  So ends the career of Johnny Football.

RF:  I think he is going to be awesome for them I am drunk. 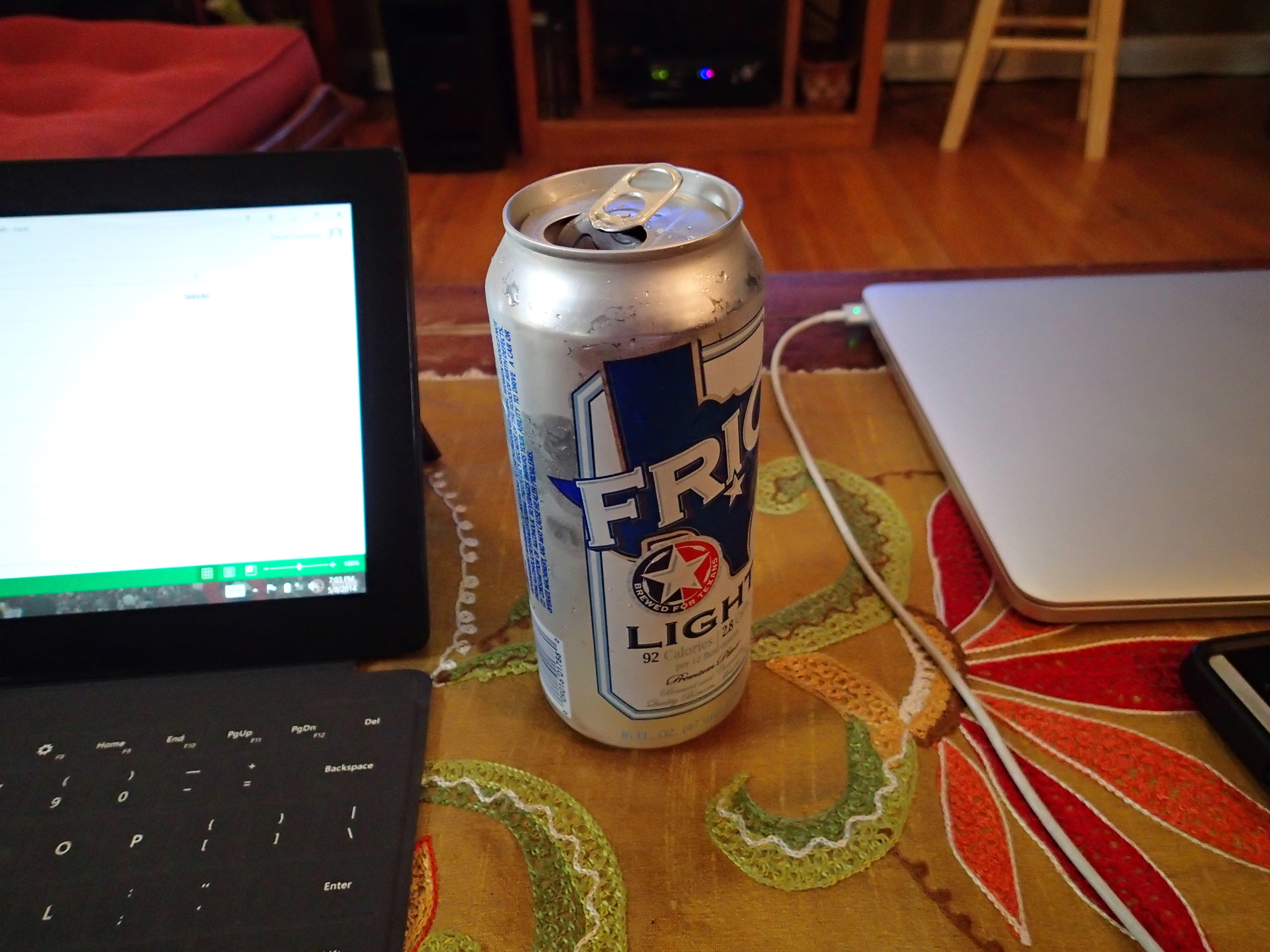 Current beverage: Frio Light.  It’s everything you would expect a grocery store in-house brand light beer to be – like the Frio River itself this stuff is 70% water and 30% alcohol-rich tourist urine.

HT:  Moving on up from East Lansing to Cincinnati.

RF:  We’re at the point in the draft where it doesn’t matter how drunk we are, we never would have known who this guy is. 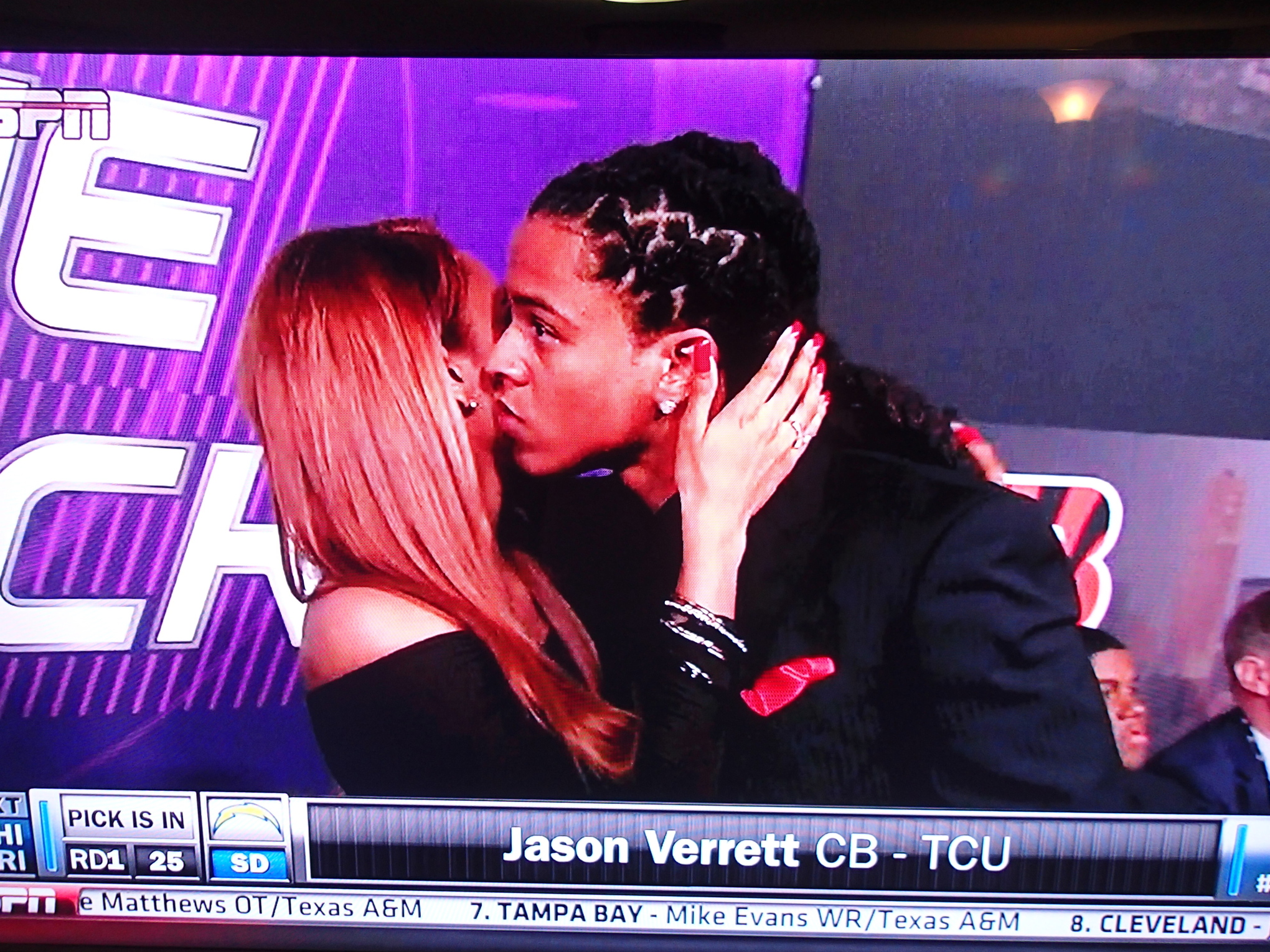 HT:  I feel like it’s an unfair advantage to be able to jot down receivers’ routes on your scalp like that.

HT:  "…the Philadelphia Eagles select Jesus Christ." [booooos unending booooos why would anyone live in this shithole boooooos]

RF:  Why are they famous for cheesesteaks when they put Cheez Whiz on them?  Dogs won't even eat that. 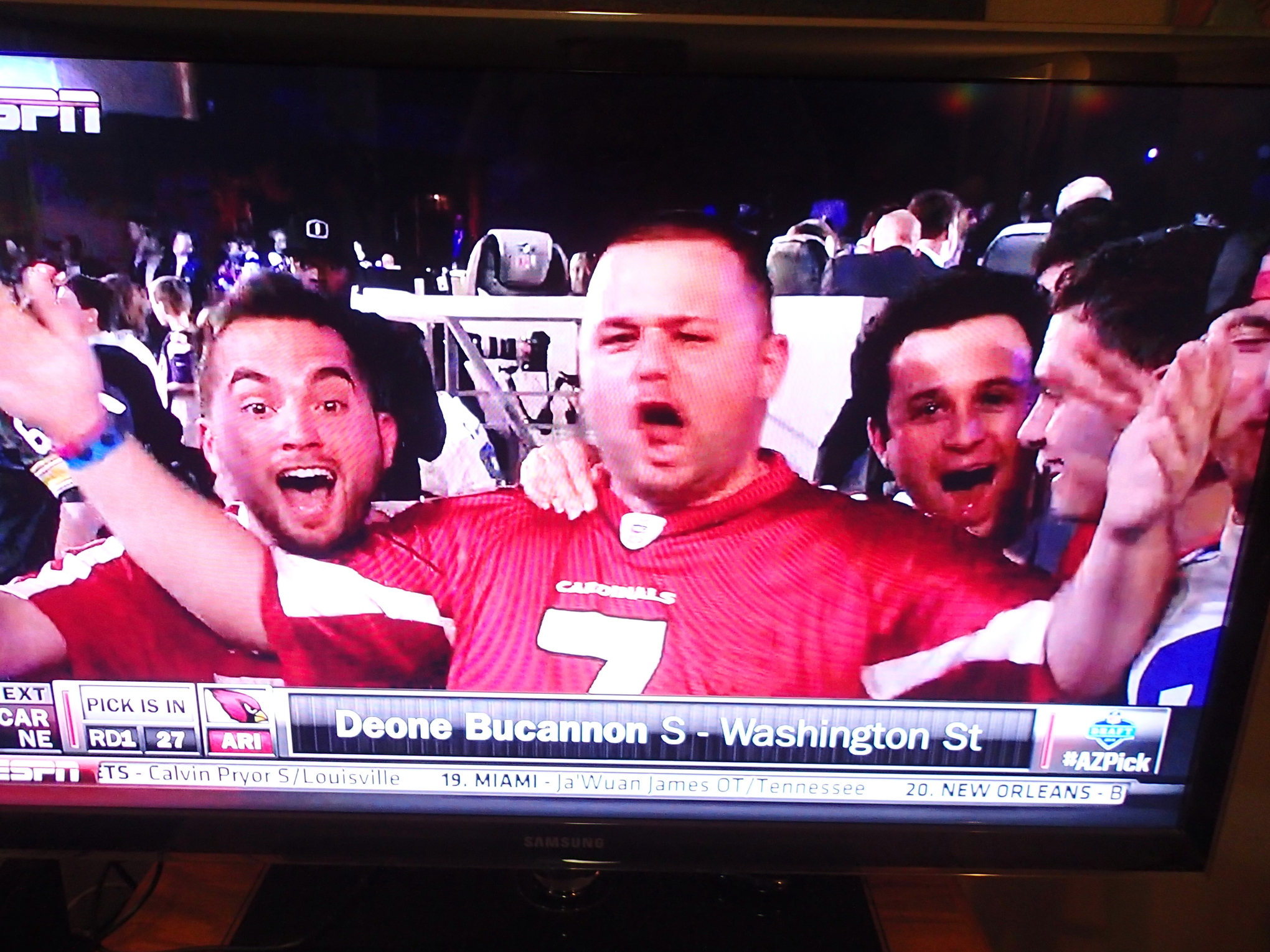 RF:  People could learn from these fans’ attitude of mystified optimism.

HT:  This player is not well known enough for how drunk I am.

HT:  Remember when Marquise Lee was supposed to be the greatest receiver in all the land?

RF:  Bill Belichick will strike him down and he will become more powerful than you can possibly imagine.

RF:  Tequila, Cointreau, tonic, and agave nectar.  I call it a margaritesque.

HT:  What is wrong with you? [drinks]

RF:  With this pick we have set the record for most dreadlocks drafted in the first round.

HT:  Good news Texans fans!  Derek Carr is still on the board for the second round!

Somewhere in the back of the fridge, two Smirnoff Ice continue to wait for their opportunity to strike.  Soon.