After picking up yet another very important series win on the road against Mississippi State, the Aggies prepare for an extremely important home series with the LSU Tigers.

I've given up on figuring out this 2014 Fightin' Texas Aggie Baseball team, but one thing is for certain - the "fightin'" part of that phrase is not an understatement. These boys are giving it all they've got, and they're on the verge of playing themselves right back into the postseason - something that looked like a pipe dream a few short weeks ago. A&M has won 5 of their last 6 games, and now they'll welcome a Top 10 ranked LSU team to Olsen Field for the second time in as many seasons.

The Tigers come to College Station winners of 7 of their last 9 games, and looking to inch ever closer towards locking up a regional host spot for the NCAA tournament. LSU hasn't lost a conference series since being swept on the road at Florida back at the end of March, and they've swept Mississippi State and taken 2 of 3 from a very good Ole Miss team. The Tigers are led by ace pitcher Aaron Nola, who has been one of the best in the country in 2014, and a very strong pitching staff overall.

In case you missed it, we swapped Q&A's with LSU's SB Nation site And the Valley shook; you can find PodKatt's answers to my questions over here on GBH, and my answers to his questions over on ATVS. Let's go ahead and see how the series is shaping up, and don't forget about the Good Bull Hunting Tailgate/Meetup/WAFFLES Extravaganza before Saturday's game! Details for that are at the bottom.

For the first time all season, Aaron Nola looked mortal last weekend against Tennessee. The usually lights-out Tigers' ace gave up 5 earned runs on 8 hits and didn't make it out of the 6th inning. Perhaps most uncharacteristically for Nola was that he walked 4 batters in the 5.2 innings of work. To put things into perspective, in over 70 innings prior to last Friday's start, Nola had allowed just 7 earned runs and walked just 15 batters. In 5.2 innings, he added 5 earned runs and 4 walks to that. It would be very surprising to see anything other than a bounce back game from Nola, though, and he still sports an almost ridiculous K/BB ratio.

Parker Ray gets the nod this weekend to open the series in what appears to have become a "Friday starter by committee" type approach by Coach Childress. My guess is that Childress prefers Ray over southpaw Tyler Stubblefield against an LSU lineup that is stronger from the right side of the plate than the left. Parker actually hasn't seen the mound since his rough relief appearance last week against Rice, in which he allowed 3 runs on 3 hits and 2 walks in just 2/3 of an inning of work. The Aggies would love to have him bounce back and at least go deep into the game to save some of the bullpen arms for Saturday and Sunday.

Jared Poche' has been overshadowed by the greatness that is Aaron Nola this season, but the true freshman southpaw has been very good in his first season in Baton Rouge. The Tigers have lost in each of his last 2 Saturday starts, though neither of those were particularly bad outings. Last weekend against Tennessee he worked 7 innings and allowed 2 runs on 5 hits with 4 strikeouts and a walk, but the loss went to the LSU bullpen. In his previous start against Ole Miss, Poche' gave up 4 runs - 2 earned - on 7 hits with 2 walks and 2 strikeouts in 6 innings pitched.

Mengden finally picked up his 3rd win of the season last weekend in Starkville with a pretty solid performance against the Bulldogs to draw the Aggies level in the series. The junior had much better command in this start than he has in a number of others this season, walking just 1 batter in 6 innings of work. Mengden scattered 9 hits to allow just 2 runs, although he struck out just 2 batters which is unusually low for him. Ty Schlottmann was excellent in relief to help earn Mengden a much-needed win, which may just boost his confidence a bit coming into a big game against a talented LSU team.

LSU will leave this spot as TBA for a second consecutive week, but I'd expect that true freshman RHP Alden Cartwright will again get the nod unless Coach Paul Mainiera has to use him out of the bullpen before Sunday's game. Cartwright got the start last Sunday against Tennessee, although he only worked 2 innings and allowed an unearned run on 3 hits and 2 walks.

Grayson Long has probably been A&M's best starter for much of this season, and despite picking up another win last weekend against Mississippi State he was certainly hit hard by the Bulldogs' lineup. The Aggies' sophomore allowed State to rack up 10 hits in 5 innings of work, scoring 4 runs, while striking out 2 batters and walking one. His last few starts had been very good, and he did still help lead A&M to a win after all, but I'm sure Coach Childress would like to see that hits number come down a bit.

Statistically hitting, LSU hasn't been a great team in terms of hitting this season, although they certainly haven't been bad either. They find themselves in the bottom half of the SEC in batting average, whereas the Aggies (somehow) sit 3rd in the conference in that statistic. Interestingly enough, however, LSU has actually scored more runs (275) than A&M has (268) despite over a 15 point difference in batting averages between the 2. That speaks for the Tigers' ability to come through with big hits in big spots, something the Aggies have had their share of trouble doing this season, and really the last few seasons it feels like. Here's how the Ags and Tigers stack up offensively.

On the mound is where LSU should definitely have an advantage this weekend. The Tigers find themselves with the 5th best ERA's in the SEC, but that's good for Top 20 in the country. Obviously Aaron Nola has been ridiculous this season, but there are 4 other pitchers on the staff - including possible Sunday starter Alden Cartwright - who have an ERA under 2, and 2 more - including Saturday starter Jared Poche' - with ERA's under 3. The depth of their staff is impressive, and it is certainly concerning from an A&M standpoint. The Aggies, on the other hand, haven't fared quite as well on the mound this season as you'll see when we compare the stats.

Here is my best guess at the lineup that the Tigers will feature this weekend.

I don't really see any way that Aaron Nola is going to struggle in consecutive starts, and the Aggies have just been too inconsistent at the plate for much of the season for me to have confidence in somehow beating him. I do think that A&M has an advantage in Sunday's game with Long on the mound, so it may come down to Poche' against Mengden on Saturday.

I'm close to being optimistic about this series, but I just can't quite get there. I think LSU has too much depth on their pitching staff, and they have a knack for clutch hitting. I expect the Tigers to leave Aggieland with a series win like they did last season. 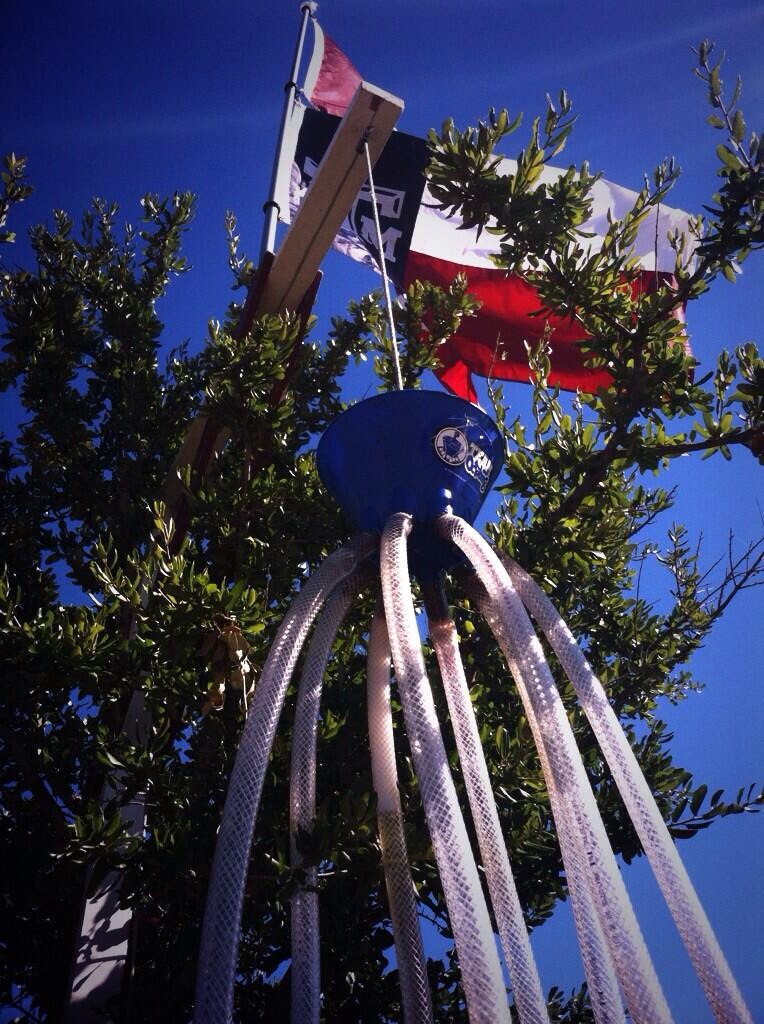 We're going to be tailgating with our buddy Eli before the game. We're going to do our best to transform the Waffle House mix into batter on Friday night and then make fresh waffles at the tailgate. But that's not all...

Breakfast tacos from Rudy's BBQ, snacks, and then some hotdogs before the noon pitch. If anyone wants to bring cookies and chips that would be cool. Bring something, you mooch.

There will be stuff on-hand but BYOB (preferably Bud Light products, see below). The world famous octobong will be there.

FSSW plans on arriving at 10-10:30 to film Eli's winnings from the 2013 Ultimate Tailgater. We need a big crowd for this so A&M can look impressive. We need to be rowdy and show the Aggie spirit so that we set the bar high for tailgaters after us. Since Bud Light was the lead sponsor we need to try to stick with Bud Light products.

Below is a map of the RV lot. We should be in one of those grassy areas. The key is to look for the octobong. It will be everyone's guiding light. We'll try to bring other GBH/Waffle House identifiers to help you find us. 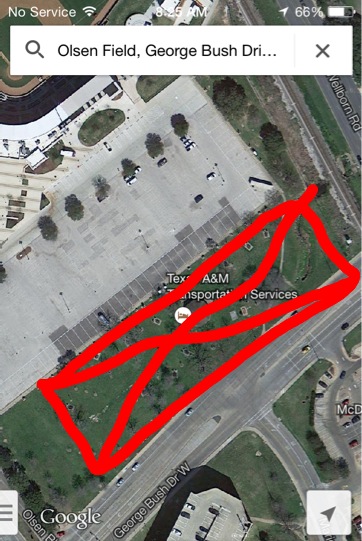