My initial thought when Texas A&M BOR member Jim Schwertner suggested a new name for Kyle Field, "Kyle Field: The House that Johnny Built", was that he was joking around, and just didn't think through the reaction. As it turns out, more than just Schwertner have been thinking about this terrible idea for a while.

When looking through patents filed by JMAN2 Enterprises, LLC - the company formed to protect and license the "Johnny Football" nickname - they filed for "The House That Johnny Built" Trademark on January 29th, 2014.

JMAN2 was previously in a trademark dispute over the rights to "Johnny Football" with College Station serial-entrepreneur, Kenneth R. Reynolds. The Manziel family might be in another one for this new filing as well.

Kerrville resident Rachel Fitch, owner of Fitch Estate Sales in Kerrville, TX, and mother to Johnny Manziel's running buddy in College, Uncle Nate Fitch, filed for the same "The House That Johnny Built" trademark on On December 27, 2013. The Fitch family is trying to make some money like everyone else, even if it's off of terrible ideas like this one.

One possibility here is that Jim Schwertner already knows this is a terrible idea, and only floated the idea publicly to help the Manziels with their trademark claims in a future dispute. Either way, it doesn't excuse him from his fumble when he named "John Kimbrough" as a past Texas A&M Heisman Trophy winner.

With Johnny Manziel owning the trademarked slogan that could become forever tied to Kyle Field, the Manziel family is poised to earn recurring licensing fees from Texas A&M for generations to come.

As you can see from this list of the trademarks on file for JMAN2 Enterprises, LLC, this is the only phrase that's been filed so far: 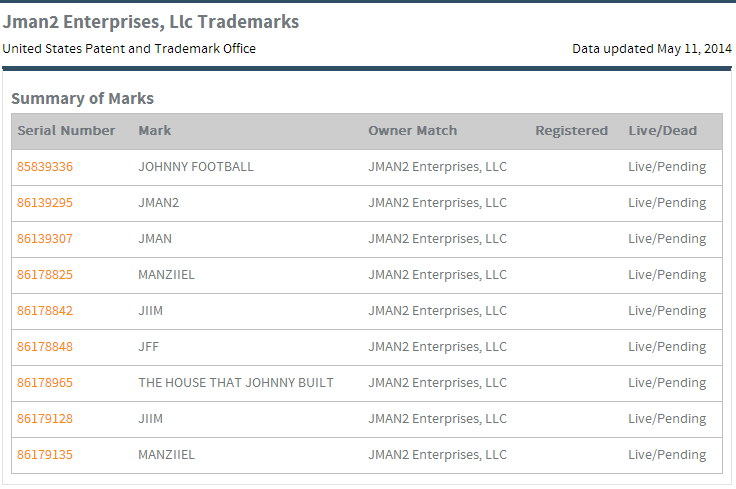 THE HOUSE THAT JOHNNY BUILT