"What is your favorite Texas A&M sports moment?"

It starts as a simple question. A question that pings a strong initial response, making you want to close the book on the concept altogether. But then you keep thinking. The memories start flooding back, and you find yourself attempting to reconcile emotion as an undergrad against more recent emotion as former student. Trying to remember if the game last month meant more to you than the game ten years ago. Whether a memory in your favorite sport overrides a more significant moment elsewhere.

Before you know it, you’re on YouTube trying to put yourself back in the various moments. Trying to remember the atmosphere. Reading articles, forum posts, everything you can. What were you doing again? Oh, yeah. Picking your favorite.

Fair warning, you’re going to disagree with some of these rankings. And that’s ok. But in my opinion, this is more about the journey than it is the destination. This is an excuse to take in clips, pictures, articles, and pretty much anything else that lets you re-live the moments where Texas A&M did something awesome. (Don’t worry, we’ll include links galore)

So, without further ado, I present the first of five installments in our GBH Favorite Sports Moments series

Before we get to the top 25, let’s take a quick moment to honor those who barely missed the cut. It’s a tough break, but this is no fairy tale world.

You could argue that it was his first truly signature moment, and it was personally when I knew we had something special on our hands. Johnny is flushed from the pocket, doubles back towards the opposite hash, and continues back to the original line of scrimmage in a darn near perfect circle.

He then finishes with a leisurely stroll towards the front pylon, completing the type of play we would somehow start to take for granted by the time he left for the NFL. 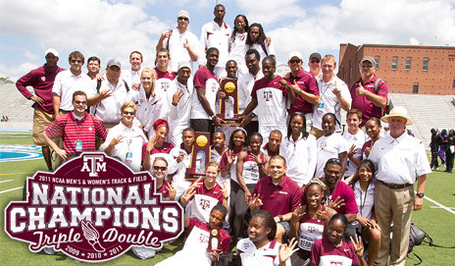 While we’re on the topic of "amazing things taken for granted," I would be remiss to not mention Pat Henry’s sheer dominance of a sport that isn't easy to dominate. Three years, six national titles. Absolutely incredible.

I’m surprised this one didn’t make the cut, because for my money it’s one of the most satisfying moments in the history of A&M athletics. BYU coach LaVell Edwards, who was ranked as high as #4 before a late loss to Hawaii, was very unhappy about his bowl slot and opponent. And he made his thoughts publicly known.

How did we respond? By separating Ty Detmer’s shoulder twice and beating the absolute dog piss out of the Cougars. And the signature blowout moment came on a perfectly executed throwback TD to Bucky.

This one isn't necessarily about the game itself. Sure, Jorvorskie put the team on his back and willed them to a victory that shouldn't have been close in the first place, but the real moment came when the teams switched end zones in OT.
The student section, which had been decimated by the September heat, walked the length of the field to the North End to make as much noise as possible. And the former student side gave the students a rare tip of the cap with a standing O.
And now…. on to the main course

Coming off the heels of an absolute beating in the 1997 Big XII title game, the Aggies had revenge on the mind when the Huskers made their first ever visit to Kyle Field. And make no mistake, Nebraska hadn’t lost any steam in the ten months since teams last met. Sure, they had a new head coach in Frank Solich, but they still flew into Texas riding a #2 ranking and the nation’s longest winning streak.
Aggie organizers threw fuel on the fire by organizing the first ever Maroon Out (which was originally inspired by the Nebraska "Sea of Red"), and the stadium frenzy was on. Due to construction, there were only sixty thousand fans in the seats… but players, coaches, and pretty much anyone involved with that day will stand by that crowd as one of the loudest in A&M history.
Nebraska ran into a buzzsaw.
Behind Jamaar Toombs, Dat Nguyen, and the A&M faithful, the good guys jumped out to a 28-7 lead and held on for a 28-21 victory.
(One final note - this was seen as a landmark victory by the Big XII South. It seems ludicrous now, but at the time the popular question was "will the South division be able to keep up in the new conference?" Weird.) 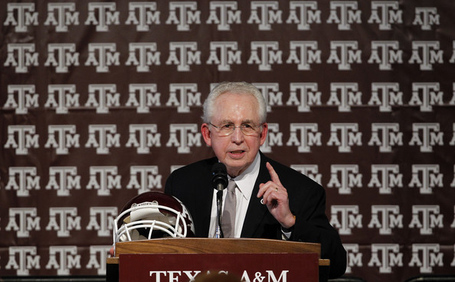 It almost didn't seem real even as it was happening.

Perhaps it was the Sherman-inspired BAS, but I halfway expected the podium to remain empty while it slowly dawned on us that A&M was the mark in an extremely elegant long con.
Did that make sense? Of course not. But the 2011 football season did strange things to all of us.
The press conference itself was unspectacular from that point on… but it made the list based on what it represents. We moved to greener pastures, and we forever altered the trajectory of our beloved university.
S-E-C. S-E-C.

Really? This is how Johnny’s legacy is going to end? Losing to a plucky Duke squad that received the beating of a lifetime from Florida State?
Really?!?!
For almost the entire evening, that answer was yes. Duke came out with their hair on fire, and a lackluster A&M dug a big hole early. But the Ags rallied to stay within striking distance, and with Duke driving to put the game away, Toney Hurd Jr. jumped a comeback route (perhaps we should use this a bit more) and took it to the house to give A&M its first lead of the day with 1:02 remaining.
It was a rough season for the A&M defense, but it was great to see Hurd make an impact play to seal the deal. And what a way to ring in the new year.

I’ll admit, it’s weird to see a moment associated with a loss crack the top 25… but it makes more sense when you consider the context.

Aggies were still new to the whole "most exciting / talked about team in college football" routine. I still remember standing on The Corner rooftop that Friday night and looking at Kyle, trying to come to terms with the fact that the literal center of the sports universe was in College Station, TX that weekend. We all were. Add that to the Midnight Yell turnout (which blew my mind) and it was officially the biggest home game in Texas A&M history.
We all know the rest. The Ags jumped out a 14-0 lead before ultimately succumbing to the grinding Alabama rushing attack. But we didn’t go without a fight, and the 95-yard pass to Evans that brought us to within seven took Kyle to a level that I hadn’t seen before. In the post game audio, Johnny said it best.

It’s probably best that we move on without dwelling on this too much longer.

Our ladies lost to Baylor twice in the Big XII regular season and a third time in the Big XII tournament finale, but fate would set up a fourth meeting in the Dallas regional final.
And nobody puts baby in a corner four times in a row.
The Aggie defense was incredible, holding Baylor to just over 30% shooting and a -13 AST/TO ratio en route to a twelve-point victory. A victory that was never really seriously challenged.
The evening concluded with Gary Blair, who was born and raised in Dallas, cutting down the nets in front of a throng of friends, family, and former players. And it couldn’t happen to a nicer guy.
***********************************************
So, there you have it. The first five entries are in the books. We'll post the remaining four parts over the next 8-10 days.
Any early thoughts on those that snuck in? Hoping to see others highlighted later? Hit the comments below.