Well that was just slightly above a disaster on the rating scale. The GBH Basketball writers share their season-long suffering in the latest Bouncyball Roundtable.

1. Expectations weren't exactly high this season, but how disappointed were you on a scale from 1 to 2011 Aggie Football?

JDMyatt - The 2012-13 team relied solely on the shooting abilities of Elston Turner so my original expectation for this year's Turner-less squad was pondering if we were heading back into a second Melvin Watkins era. But then the Ags started 6-0 and the additions of Jamal Jones, Devonte Fitzgerald and Shawn Smith gave the team some much needed athleticism to maybe do some damage in the parody-filled SEC. A whiff in Corpus Christi, a 3-0 start to conference play and a multitude of bad/heartbreaking losses later and we had basically a repeat of the '12-'13 season. It was not a disappointment like the 2011 football team where championship dreams were shattered beyond recognition, but the realization that mediocrity may be the best this regime can do brought similar feelings of sorrow.

We Drank the Kool-Aid 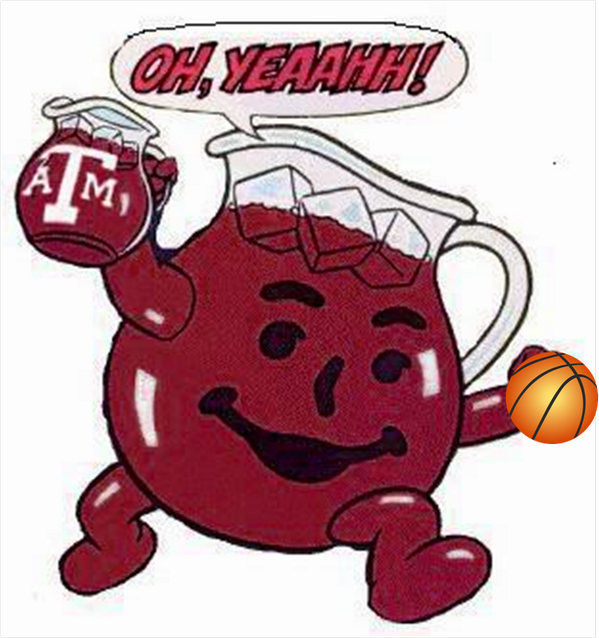 The 3-0 start to conference play built up a lot of excitement around the program. And then it was all gone within a week. All of it.

gigthem08 - It's tough to answer this question in a vacuum. I had no expectations entering non-conference play, and those expectations weren't exactly raised after the Corpus Christi and North Texas debacles. But then that darn 3-0 SEC start came along, which was followed by the huge road win over MSU first of three soul-crushing "how did we not close that game" road defeats. From that point on, the season was an unmitigated disaster... which I guess puts me at a solid "2005 Aggie Football" on this scale. That season, of course, contained an season-opening beating by Clemson, followed mid-season momentum, followed by Franvember.

DerekAggie06 - The more I think about this question, the more and more frustrated I get about the state of the Aggie Basketball program. It's not like I was expecting a trip to the Sweet 16, but I expected a team that would be competitive in the top third of a very weak SEC conference in 2014. Yes, they had two teams in the Final Four, but let's not act like that is in any way reflective of the talent across the rest of the league. I don't think I can think of another season where the team just appeared to give up in the middle of games. The inability to put away far less talented teams, hell we were losing to far less talented teams, is all too indicative of what this season showed Aggie fans (or what's left of them). My answer on the scale is Billy Kennedy. That ranks right between "I don't care at all" and "LOL I'm stealing over a million a year from this school."

2. Who is your MVP for the season?

JDMyatt - Jamal Jones certainly deserves recognition for his scoring prowess, but in terms of impact and contribution on both ends of the court, Alex Caruso's value knew no bounds. Though it got him into a trouble at times, Caruso's aggression on defense lead the Ags to having one of the top defenses in the SEC, and while playing out of position on offense, the sophomore still was the lone playmaker able to create shots for his teammates. Plus by season's end, Alex started to become a more consistent scorer as well. If he can bring his whole game together these next two seasons, the CS native could end up being an all-time great in Aggie basketball.

DerekAggie06 - It feels a little odd to think about the MVP for the season and not look in the direction of the team's leading scorer. Jamal Jones was without a doubt the scoring threat the Aggies relied on last season, perhaps too often. I look at an MVP vote by asking how the team would react with the loss of each player. With that said, Alex Caruso is easily the most valuable player on this Aggie roster. His defensive intensity and ability to be the floor general is simply on another level from the rest of the roster. I know I'm becoming a broken record with this, but Caruso is a consistent jumper away from being a Top 20 pick in the NBA Draft in a couple of years. I don't even want to contemplate what last season would have looked like without Caruso out there.

gigthem08 - Fun fact, the Miley Cyrus song "Wrecking Ball" is actually about our offensive sets when Alex Caruso isn't on the floor. He did absolutely everything this year, and his contributions were perhaps most clear when he was on the bench. He played point this year out of necessity, but I'm really interested to see how effective he can be working off-ball.

3. There have been more than a few transfers/dismissals in the last three years. Which one do you think would have helped the team the most this year?

DerekAggie06 - My choice here might surprise some people, but I'm going with Daniel Alexander. Alexander is a 6'9" Forward that is the definition of a stretch-4. When I look at the offensive sets for the Ags in Billy Kennedy's offensive system, opposing teams only have to guard the perimeter and collapse in the paint. We make it entirely too easy for teams to ignore us from 15-18 feet out. Alexander, who transferred to Grand Canyon University, shot 45% from the field this season for the Antelopes, 41% from behind the arc, and 88% from the free throw line. Instead of taking our 4's and 5's outside the paint to just serve as pointless rotation men in a silly dribble handoff motion outside the arc, a shooting big man like Alexander would have made a big difference for the Aggies this year. I think he would have easily been able to be the second leading scorer on the team. Then again, that would require a head coach that can utilize the strengths of his personnel instead of round peg/square hole coaching.

gigthem08 - J-Mychal Reese. We only saw him play in short bursts, but he appeared to be the instant offense (and depth) that this team so badly needed from the guard position. And once Fitzgerald when down, that team weakness intensified tenfold.

JDMyatt - Ah yes, the yearly tradition of players transferring or outright leaving the team. I propose a new prop bet for GBH and put odds on who the next one will be. I'm putting my money on Tavario Miller. The freshman didn't get as much playing as one might like, even when the Ags struggled with their post play. I'm already imagining Brent Zwerneman tweeting it out a few days before next season begins.

4. You get to pick one thing to have the team focus on in the offseason. What's your choice?

JDMyatt - I'm going to piggyback off of gigthem08 and suggest that all post players spend the offseason shooting from the elbow. It happened every game. The opposition went into a zone, Caruso passed inside the top of the key to Kourtney Roberson or Antwan Space, and the defenders would remain under the basket begging for either player to take the shot. If anyone can become a semi-consistent mid-range shooter, the offense will improve dramatically.

gigthem08 - Getting some production from the high post against a zone defense. Our opposition gleefully went zone at almost every turn this season, knowing that any entry pass to the high post (which by design is the one pass you're supposed to make to break a zone) would have very little consequences. As such, we saw guards gambling out top and big men sinking to protect the glass, knowing that they couldn't be hurt from the 12-17 foot range.

DerekAggie06 - Can I jokingly and seriously say finishing at the rim on layups? We have to be the worst team in the nation in layup percentage if it were a real statistic. In all seriousness, I'd have the team in the gym shooting all day everyday. Jumpers, jumpers, and more jumpers. We finished the season ranked 251st in the nation in field goal percentage. That's terrible. Don't use any of those ridiculous computer aided jump shot machines. Develop a shot that is comfortable and in the constraints of a players style. I've seen computer programs ruin too many release points of good shooters. Just take jumpers. Off the dribble, off a screen, off a feed into the corner, step back jumpers. Practice them all until they are just as natural as morning wood. They should just happen without you even having to think about it.

5. What are your takeaways from the recent Billy Kennedy interviews since the season ended?

Eric Hyman is a better fan than you.

DerekAggie06 - If you are a fan of Billy Kennedy, you may want to scroll down past my comments here. The interviews we've seen and heard since the season ended are nothing short of embarrassing. This is a guy getting paid over a million dollars a year to recruit players that fit the system he wants to run, coach them into that system, and execute a gameplan that is supposed to result in far more wins than losses. All he's done in his interviews is continue to blame the past coaching staff (umm it's been 3 years of your system) and say the kids on the roster aren't very talented. Well, maybe you should recruit better, or ya know, be able to coach them up a tad. Crazy thought, I know. We now know what Billy Kennedy is: A barely above average coach and that is quick to deflect blame away from himself.

JDMyatt - So our coach came in rebuild a program that just went to it's 6th straight NCAA Tournament. Our AD's proof that he cares about the basketball program was he almost got thrown out of a game for yelling at a referee like a belligerent drunk fan... Football season starts in 20 weeks!

gigthem08 - I'm really frustrated. Kennedy has not backed away from blaming his personnel, even going so far as to say "the rebuilding project was bigger than I thought." Wait, what? The day he walked on campus, this program had made the NCAA's six years in a row and was picked to finish high in the Big XII. That "bare cupboard," of course, went 4-14. The hits haven't stopped rolling, though. Kennedy has blamed the recent players at seemingly every turn. I guess I'm just irked that his answers have the angle of an NBA guy blaming his GM... that doesn't work in college. He is the GM. Any blame for "personnel" issues, especially after three years, lie on his shoulders and his alone.