Towards the end of last season, I was critical of Johnny Manziel's decision making in the Texas A&M offense. I've now changed my views on the subject. What changed my mind?

As some of you may recall, I wrote this analysis after the loss to LSU in November. The headline said it all -- "The Aggie Offense is Broken: Is Johnny Manziel to Blame?". In the analysis, I pointed to several plays where Manziel appeared to be ignoring the short passing game where receivers were open and instead focused on deeper routes, causing the offense to fall out of sync. 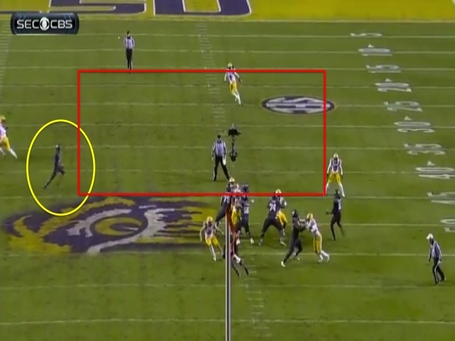 SURPRISE! I was wrong. At least in terms of how the A&M offense operated last season. There have been several revelations on the read progressions of the A&M passing game in the last couple of weeks that have led me to re-evaluate my position on the subject. This is all thanks to Johnny Manziel's very public draft process.

The first clue came during the Gruden's QB Camp show on ESPN featuring Johnny Manziel. During the episode, Manziel and Gruden discussed on the white board a concept Gruden called "dusty" (for double under) while Manziel called the concept "8 X Indy".

Gruden explains the "dusty" concept he knows, by breaking down film of Peyton Manning. He points out to Manziel that Peyton's first read in this concept is the first under route, or the receiver first coming into the middle of the field. The second read is the receiver following behind him in the same route, who is lined out widest in the trips formation.

However when Manziel goes to the white board to explain the same concept in terms of the A&M offense, things change a little. The routes are the same between the two plays, but the read progressions are different. Manziel says that the first read on the play for him is actually the corner route, with the second and third reads being the two receivers running the double under. This means that Manziel is looking deep first, and short second.

Gruden then praises Manziel for using all of his route options on this concept over the course of his career. Gruden points out that Manziel has used the second double under before, as well as the corner route that is usually the first read for Manziel in the A&M offense. Gruden shows a clip from the Alabama game in which Malcome Kennedy scores a touchdown with the corner route against man coverage.

Finally, Manziel discusses the thinking into his final TD pass as an Aggie against Duke. On this play, Manziel points out that Duke's safety was playing close to the line to defend against the run, leaving the 9 or "go route" open on the backside of 8 X Indy. Manziel and Derel Walker take advantage of this single coverage.

In all, this film shows two things: the first is that Manziel can read defenses to adjust his reads. Gruden praises Manziel in this area, saying he has mastered the "dusty" concept. I consider that high praise. The second is that Manziel's first read was the deep route -- not the short passes coming open underneath. I found that interesting.

The second clue that changed my mind and reaffirmed what we watched during the Gruden exchange was a twitter conversation between Lance Zierlein and Chris B. Brown (@smartfootball on twitter). Here is the conversation that occurred on Saturday morning for you to follow along:

@smartfootball Is that accurate? He used that is the reasoning for passing up on those open crossing routes so often. Not sure about that

@lancezierlein you mean just deep to short? That's most systems but Johnny's was very progression heavy

@smartfootball mechanism of Dana's version of the passing game. Wondered how valid that was and I know you would know.

@lancezierlein that system is very strict progression based. They know coverages to reveal who is open but don't adjust as much off of that

So if you follow along with the conversation, it appears that Johnny was coached to constantly look deep first in the A&M offense, and then work towards the short passing routes.

This means that when dingleberries like myself try to tell everyone that Manziel is missing these short routes in the passing game, they really don't know what they are talking about. It seems all of last season Manziel was focused on deeper routes because that was what he was coached to do and how the offense was designed.

However, that doesn't mean that style of read progression is necessarily correct. I'm of the mindset you take what is open and what the defense gives you. If the short reads are open, throw them. This is something you can anticipate through film study of the opposing defense before a game. Knowing that a team like LSU is going to bring a barrage of blitz concepts against Manziel, I'm not sure why you can't change read progressions based on the opponent or even over the course of a game. But, this is how we choose to operate the offense.

This also opens another interesting discussion -- is this type of read progression going to be a prominent feature in next year's A&M offense or will it change with a new QB coming in to lead the offense? Personally, I hope it does change and focuses in on these shorter route combinations. These reads are easier for an inexperienced QB to make, and we are also losing Mike Evans and Derel Walker, who were influential in the Aggies' deep passing attack. We aren't as talented this coming year at the WR position to constantly take advantage of man-to-man coverage. I'd rather focus in on short passing routes and let our athletic receivers and running backs pick up yards after the catch.

In all, with Johnny Manziel having a very public and open draft process, we are now able to learn more and more about how the A&M offense operates.

*Note: Kevin O'Connell has been working with Johnny Manziel during the draft process