The nominal home team had an advantage in size in both Women's Bouncy Ball games at Reed. The Ags survived, the Zags are going home. #3 A&M takes on #11 James Madison on Tuesday night. Winner gets the Sweet 16 in Lincoln.

Share All sharing options for: WBB: enough to advance

After watching N. Carolina survive Tennessee Martin on the ESPN3 streaming video, I headed to Reed to catch the early game and check out prospective opponents for Tuesday night.

Gonzaga took an early 7-4 lead and it looked like their 6-5, 6-4 front line would be hard to stop. But James Madison simply outhustled the Zags through the middle of the first half and were up between 6-8 points until a late Zags rally cut the halftime lead to 2. The second half opened with JMU's Kirby Burkholder getting fouled on a 3-point attempt. She sank all 3 to open a 5 point lead. The game went back and forth through most of the second half, and Gonzago retook the lead a couple of times. But I found myself thinking like Coach Blair in his postgames: the Zags where playing inside out to take long jumpers and 3s and they weren't hitting enough of them. The Bulldogs finished 4 of 20 from behind the arc. This approach was surprising to me: in addition to having the 6-5 Shelby Cheslek and 6-4 Sunny Greinacher, the Zags played 9 players 6-0 or taller. But they didn't push to get it inside against the Dukes' zone D.  And when they did, the taller player often took a difficult shot instead of facing up.

JMU's Kirby Burkholder had a quiet first half, but then seemed to be everywhere as the game went on. She finished with 28 points, 18 boards, 3 steals, and 4 assists. She was also lucky to not get called for a flagrant on a play where it looked to many of us like she hit one of the Zags high on a loose ball foul.

We sat behind the James Madison crowd (they were actually in our season ticket seats closer to the floor) and the JMU pep band was in the corner of Reed closest to us. They were a lot of fun and played really well too. They held up these signs when forward Nikki Newman had each of her four blocked shots. 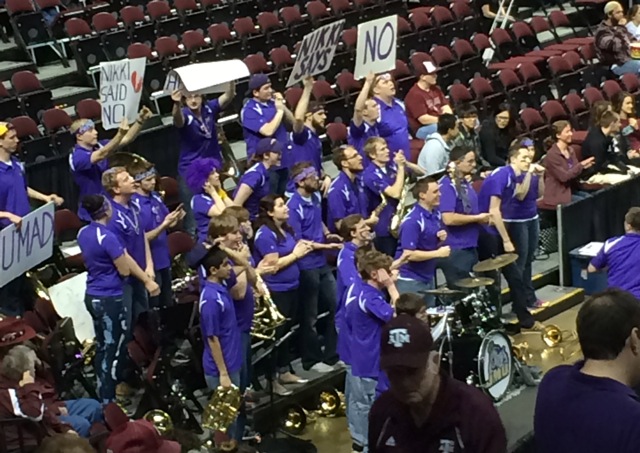 The Ags watched most of the game from the stands before leaving for the locker room in the second half.

The Ags went with a starting lineup of Karla Gilbert, Courtney Williams, Tori Scott, Courtney Walker, and Jordan Jones. Tori getting the start was based on the Flickertails running essentially a 4 guard offense. As promised, Nodak came out in a man to man defense. A&M took a 10-3 lead early, and the visitors switched to a zone. As we saw too many times, the Ags bogged down against the zone and N. Dakota never took the lead, they tied the game at 24, with 2 minutes left, and again at 26 with a minute to go in the first. Foul trouble for Jones and Gilbert didn't help. The Ags scored two buckets by Tori Scott in the last 40 seconds to go into the intermission up 30-26.

In the stands we were saying it would be interesting to hear what would happen in the locker room. As it turned out, ESPN had a camera in there, but I didn't record this game, so I only have the impressions from the postgame interview. Not surprisingly, Blair was blunt with his team.

The Ags came out of the locker room with a different level of energy, and went on a 10-0 run in the first 4 minutes of the second half. The keys were increased defensive intensity and getting the ball into the paint. The Ags stretched the lead to 22 by the 11:22 TV timeout. The press caused 3 30 second violations in the second half, and A&M was able to get some buckets in transition. There were two especially nice assists from Jones. One was on a Walker steal where CWalk got the ball back from Jones on a bounce pass through the lane as both were running full speed toward the basket. The second was a Walker to Jones to Williams play that resulted in a hoop and a foul.

N. Dakota didn't fold when they were down 20+, however. Helped by foul trouble and Blair's desire to give his starters some rest, the Nodaks stratched back to a 10 point deficit with 1:20 to go. But the Ags made their free throws down the stretch to pull away to the 70-55 final score. In the postgame, Karla Gilbert called it one of the Ags worst games of the season. We have to hope that this was just the rust of the 15 day layoff, and Tuesday will see a better performance.

The Ags were led by Courtney Walker's 19 points. CWalk added 8 rebounds and 3 steals, but it wasn't her best game. Karla Gilbert and Tori Scott each had 14 points; Tori's were mostly in the first half, while Karla's were in the second. CWill was held to 9 points on 3-13 shooting. I was hoping that when Nodak had to foul late that they would foul JJ; she was just 2 points shy of a double-double with 8 points and 11 assists. The bench didn't score much (6 points on a FG apiece for Rachel, Curtyce, and Chelsea), but they had 16 rebounds and 4 blocks. Overall, the Ags outrebounded N. Dakota 49-36 and 11 blocks and 11 steals.

North Dakota was led by their senior star, Madi Buck, who poured in 22 on 8-14 shooting. That included going 4-6 from 3. She also led the team in rebounding. Junior backup post Emily Evers is an agile big body at 6-5. Evers had 9 points including a couple of spin moves on Karla (hey, maybe she traveled on one, I don't have the replay) and 8 boards and earned a spot in the postgame press conference.

Karla Gilbert already eclipsed the single season A&M record for blocks in the loss to Tennessee in the SEC semis. Every block she gets for the rest of the tourney extends that record. She had 5 to bring her season total to 64 and her career total to 150. She needs 26 to tie Morenike Atunrase's career record of 176.

Jordan Jones' 11 assists gave her 237 for the season, shattering Lisa Branch's single-season record of 231 from 1995-6. Add the 77 from her freshman year and she is already at 314, which puts her just 1 assist outside of the top 10 career list in just her sophomore season.

Up Next: James Madison

From what I saw against Gonzaga, as well as the obvious trend of everyone else doing it, I expect JMU to play a packed in zone against the Ags. A&M is going to have to figure out who is going to slow down Burkholder, but it would be a mistake to think of JMU as a one-woman team. I think Karla presents a more polished post challenge than the Gonzaga bigs, and JMU's Lauren Okafor, who played 17 minutes against Gonzaga, may be needed even more. JMU finished the game with 3 starters having 4 fouls. I expect the Ags to be even more aggressive than the Zags, so JMU's depth may become an issue.

The game is a late start because there are 8 games that night to determine the Sweet 16. Four east coast games are at 6PM CDT.