Remember the 3-0 conference start? The talk of postseason play? The general basketball enthusiasm?

That seems like a lifetime ago. Our Aggies went out with a whimper on Saturday and have now lost six of their last seven in conference play. Here's how it happened.

This half was boring. Both squads were still in the teens with less than four minutes remaining. Terrible sets. Terrible shooting. Terrible everything.

Jamal Jones (34 minutes; 17 points / 5-21 FG / 1-10 3PT) led the Aggies with 7 points in this abomination of a half, while Donte' Williams (24 minutes; 9 points / 10 rebounds / 3 blocks) paced the Bulldogs with 7 early points of his own. Georgia threatened to pull away late in the period, but a Jones buzzer beater knocked their lead down to two. Halftime Score: Texas A&M 23, Georgia 25

Things actually improved (some) during the first ten minutes of the second half. While Kourtney Roberson (29 minutes; 9 points / 7 rebounds / 4-5 FG) and Shawn Smith (25 minutes; 8 points / 4 rebounds / 3-6 FG) kept the Aggies moving during this stretch, the Bulldogs used six different contributors to answer at seemingly every turn. They threatened to pull away coming out of the 2nd media break, but a quick 6-0 counter by the Ags forced a Bulldog timeout with A&M up by 1.

Georgia responded with five quick points by Kenny Gaines (26 points; 14 points / 7 rebounds / 5-13), who scored all 14 of his points in the 2nd half, and they were back up by four. The teams traded free throws and maybe one field goal buckets for the next few minutes and we hit the final media time out with the Aggies still trailing by five.

Jamal Jones hit 1 of 2 two from the line after an aggressive drive to cut the lead to four, but UGA's Gaines responded with a mid-range bucket to push the lead back to six. The ensuing A&M possession was unorganized and frantic, and ultimately ended in a Shawn Smith turnover. After a Bulldog missed three, Jones lost the handle trying to force the action and it led to a wide open transition dunk. Georgia was now up 8 (their biggest lead of the game) and the two biggest A&M possessions of the evening had produced absolutely nothing.

The damage was done: the rest of the game played out via missed Aggie threes and Bulldog free throw trips. Final score: Texas A&M 50, Georgia 62

Game MVP: UGA's Gaines was the difference in the second half, plain and simple.

It will likely take an 11-7 conference record to lock down an NIT bid, and that requires a 7-1 finish. With LSU (twice), Ole Miss, Mizzou, and Tennessee still left on the schedule.... I just don't see it. 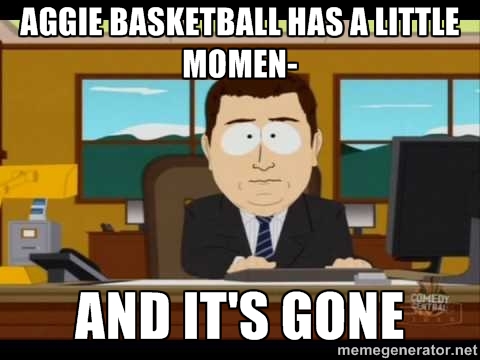