What better way to occupy ourselves during football offseason (except with baseball, obviously) than to start a weekly Top 10 list of beers?

In the absence of football, basketball that is actually watchable, and the almost-here baseball, Ranger222 and I thought it would be a fun idea to put together a weekly Top 10 list of beers that we've had recently. Since I live in Texas and he's in Florida, our lists will often be different but there will also be times when some beers overlap on both lists.

Good Bull Hunting always encourages that you drink responsibly. Unless the Octobong is involved, then all bets are off. So, without further ado, our 1st ever Dueling Top 10's - Beer Edition.

I don't have near the experience in sampling craft beer, but I have tried my share enough to build a Top 10. I also have the advantage of living in Florida, so I get a different distribution than someone in Texas that gives this list a unique spin. 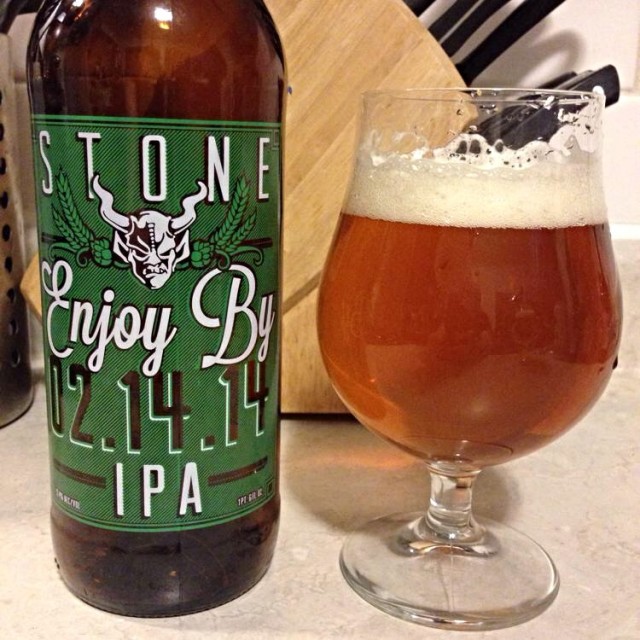 This Imperial/Double IPA by Stone is my favorite beer that I have sampled so far. What makes this beer unique is that Stone brews this beer NOT to have a long shelf life, giving each batch a huge expiration date on the label. I'm a hop-head as you'll see, so I can't get enough of this beer's freshness. 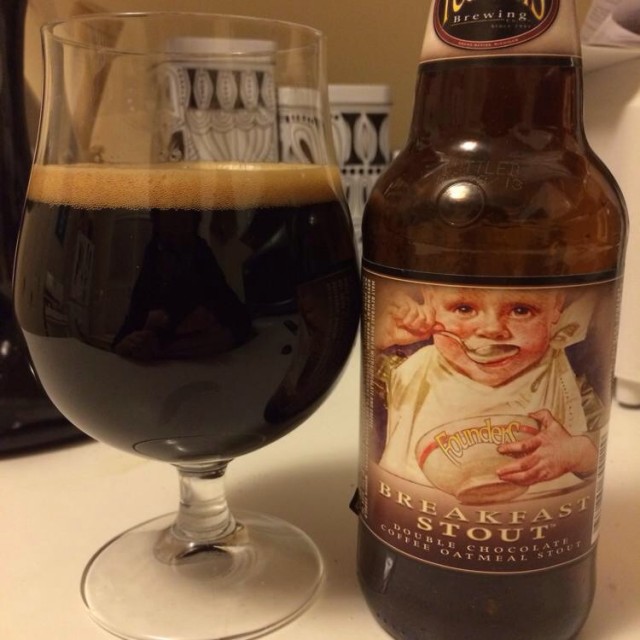 Number 3 was a tough choice, but I'll place a really unique Triple IPA here. To me, this is one of the more complex beers I've tasted. I wouldn't pair it with food; this is a beer I'd have sitting on the back porch contemplating about life or football or something. You get a lot of pine and citrus hoppinesss and then a real aggressive bitter finish. The bitterness may be too much for some. 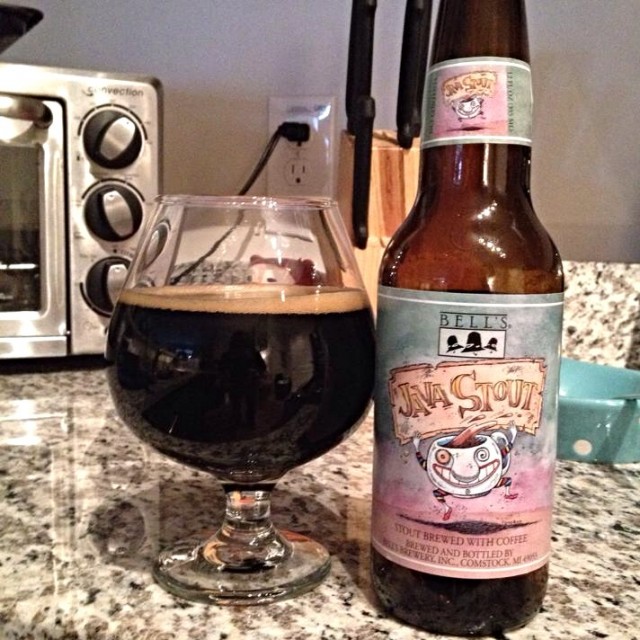 This may not be Bell's most notable stout, but I really enjoy the strong coffee flavor here. In fact, this is the most intense coffee flavor I've had in a beer. It may not be for everyone, but it's my jam.

I love the story behind this brew. It is actually brewed in Cervezas del Sur in Ponce, Puerto Rico and not at Cigar City's facilities in Tampa. That led to the creation of this Caribbean Style IPA that includes mango and Simcoe hops. But here is what's awesome - this beer is dry hopped on the shipping container back to Tampa to be put into cans. So it is literally dry hopped on the high seas!

I had the next three entries in succession during the Super Bowl. There has been some hype surrounding this Double IPA that is named after the hop ranchers who cultivate the flavorful hops. Believe the hype and get some if you can. 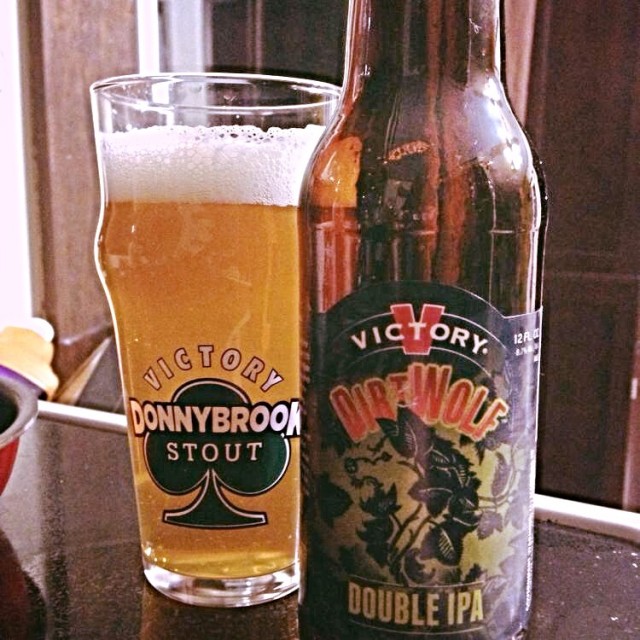 This is another Double IPA from Victory, but the hops here are a little more "darker". This one doesn't have as nice as a finish as the Ranch, so it gets dropped a notch.

This American Imperial has a big hop aroma. To me, hops shouldn't be this strong in a stout. It's unique though.

Great Divide from Denver, Colorado has had a rough week and it doesn't get better coming in at #9. I like this strong ale, but some might find it a little too sweet. 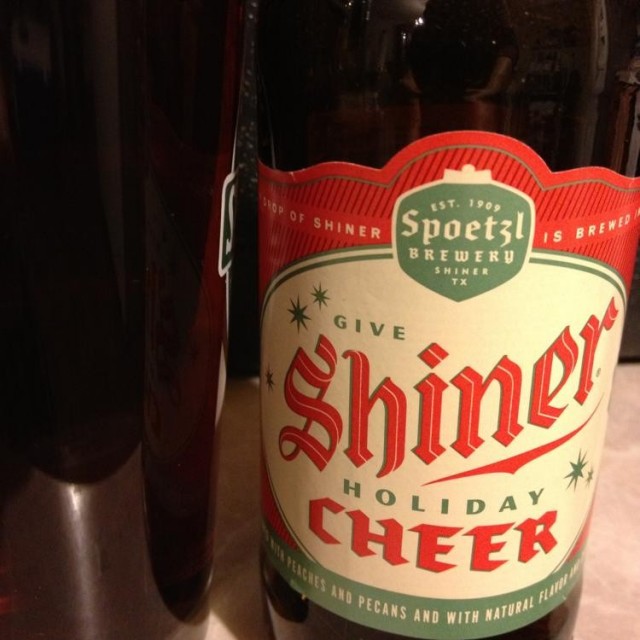 That's a pretty nice list from Ranger, although I can't say I'm the biggest of fans of Victory. I am, though, admittedly jealous of his Florida distribution; I'd love to be able to drink Bell's or Cigar City beers on a daily basis here in Texas. But, alas, that's not the way things work, so I've got to compile a list of my current Top 10 beers that I have access to. This proved a bit more challenging than I thought it would; it's amazing to see how much the beer scene here in Houston has grown and improved in just the last year. 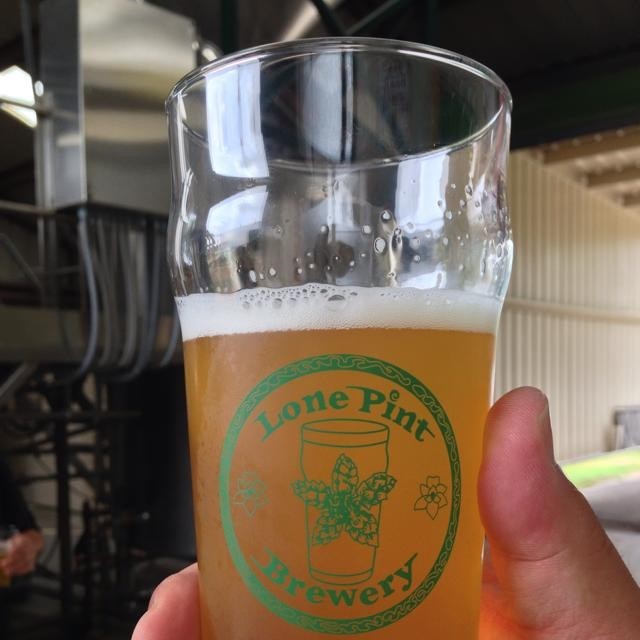 Anyone who follows me on Twitter - or especially on Untappd - probably knows my love of this beer. In my opinion it was the best beer brewed in Texas in 2013, and I seriously cannot get enough of it. The mosaic hops are allowed to stand out since they are the only hop used in brewing this (it's a SMaSH - single malt and single hop), and they impart tremendous grapefruit and tropical flavors. Whenever Lone Pint starts bottling, I expect to have this in my fridge on a daily basis.

Contrary to its name, this beer most certainly does not suck at all. It's a seasonal release from Lagunitas, but it's one that I was really looking forward to having again this year after trying it last year and it didn't disappoint. Sucks does an awesome job of balancing sweetness and tropical fruit flavors with bitterness and a hint of pine. One of my favorite Double IPA's on the market right now. 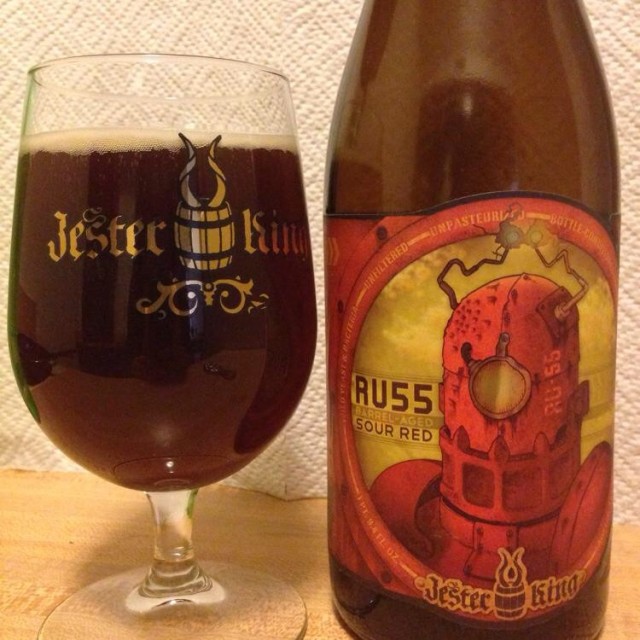 Before I get into talking about this specific beer, let me start with the brewery. If you live anywhere near Austin, or will be in Austin anytime in the future, I strongly recommend making the 20 minute drive out to the Dripping Springs area on a Friday, Saturday or Sunday and checking out Jester King. They make some terrific beers that are unlike most any others you will find in Texas, and their brewery itself is on a beautiful patch of land in the hill country. Trust me. GO. As for RU-55, it's a farmhouse Red Ale that they aged in oak barrels with wild yeast and souring bacteria. The resulting flavors are tart cherries and other fruit flavors with some oakiness that comes through from the barrel. It's very tasty.

Fair warning - this beer packs a punch, and it kind of sneaks up on you. It's 11.1% ABV and 111 IBU's (International Bitterness Units) but it's fairly well balanced as far as Double IPA's go. The resinous pine, grapefruit, and mango flavors from the hops are strong but there is a nice malt backbone that keeps the hops from being overwhelming. This one is fairly new to the Houston market, and I'm glad I tried it recently. It was good enough to buy a 4-pack of. 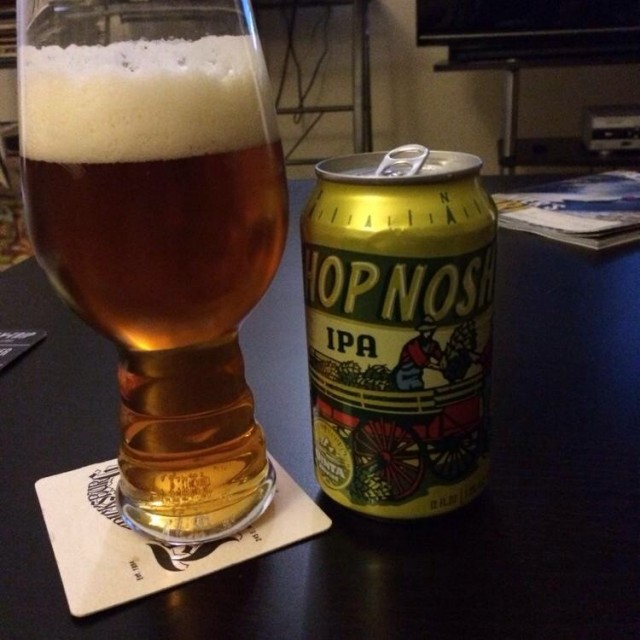 Uinta is a fairly new brewery to Texas - coming from Salt Lake City, Utah - and this beer was formerly known as Hop Notch until Uinta had to change it due to a trademark dispute. For me, this is a great example of an American IPA (West coast style) - strong citrus flavors and hints of pine imparted from the hops, along with a good malt backbone, and a fairly bitter finish.

This is beer comes from Boulevard's Smokestack series - which has, for the most part, been quite good - and they actually let this beer sit in charred oak rye whiskey asks after brewing it, which gave it some really unique flavors. The rye - they used 2 different types - is obviously the dominant ingredient, which imparts some pepper and spice flavors along with hints of the charred oak barrels and some citrusy notes from the hops. There's quite a bit going on, but I think all the flavors work well together and I'd gladly drink this again. 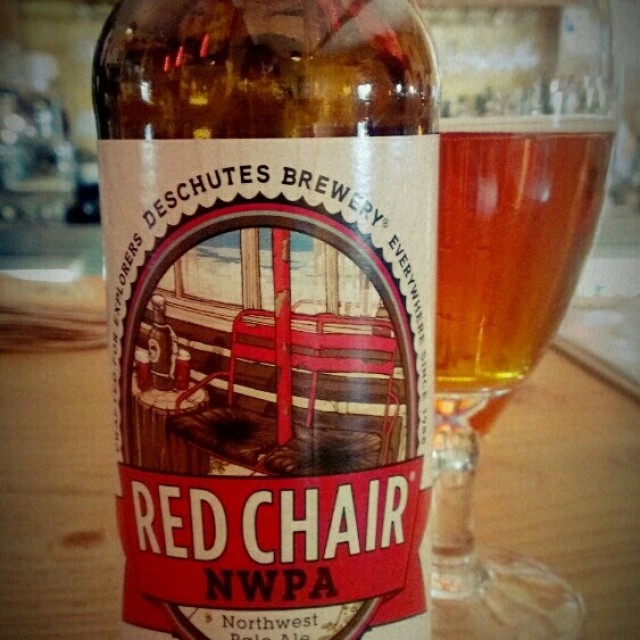 Can you tell that I'm a big fan of hoppy beers yet? This one is an American Pale Ale, so it packs less of a hop punch than some of the IPA's you'll find out there (and on this list). This one is a bit more malt forward - 6 different types of malt were used in brewing Red Chair - with caramel, toffee and bready flavors all coming through up front. The Cascade and Centennial hops used in this one impart citrus and pine flavors that work nicely with the malt flavors to make for a nice, refreshing beer and won't scare away anyone who isn't a fan of IPA's.

Like Ranger, I love that they brew and market this beer as one that needs to be drank before the date on the bottle (in this case, February 14th). Any good IPA will inevitably fall off after time, as the hops are simply better when they are fresh, and you can certainly tell that the hops in this DIPA are very fresh. I did enjoy this quite a bit (ha, ha.. punny), but for some reason it didn't do quite enough for me to make my Top 5.

I'll admit this up front - pilsners are far from my favorite style. Saint Arnold's ICON series has been a bit hit or miss for me, and my first try of this one I was a little unsure, but I've since decided that I'm a fan. The cool thing about this one is that they decided to make it a SMaSH beer - similar to Yellow Rose - and let the pilsner malt and Saaz hops really stand out. The beer features grassy, floral and spicy flavor notes from the Saaz and some bready and biscuity malt flavors as well. It's quite crisp and refreshing, and I've found myself ordering it a decent amount around town. 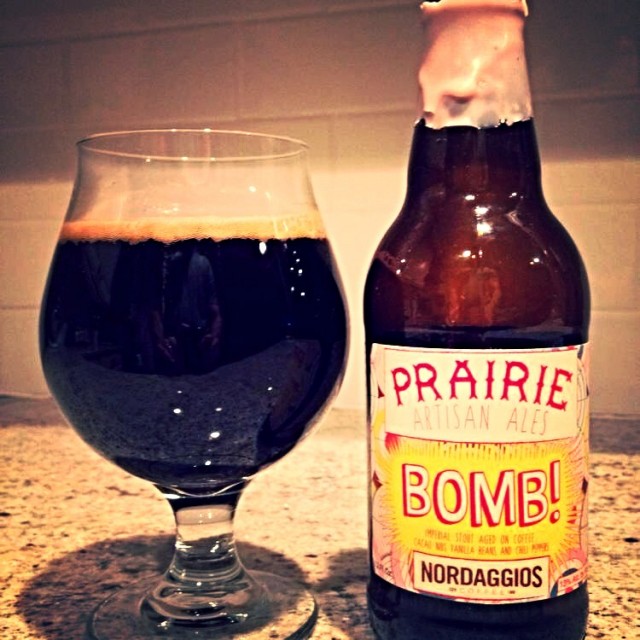 If we'd started this list a month or 2 ago, this would be near the top for me; it's only all the way down here since it's mostly impossible to find around right now. Bomb! is an imperial stout that was aged on espresso beans, chocolate, vanilla beans, and ancho chile peppers. It sounds like a ton of things going on in one beer - and it is - but somehow they all work incredibly well together. The chocolate and coffee flavors are the strongest, the vanilla notes come through a tiny bit, and the chile peppers give it just a hint of kick on the finish that really makes for a tremendous beer. If we see a new batch of Bomb! in Houston soon, I expect this will climb back higher in my Top 10.

So, what do y'all think? Beers that we absolutely failed by not including? Beers on the list that you don't think are the slightest bit deserving? Live in another state with different distribution options and have an entirely different list than we do? Talking beer is always fun, so hit the comments section and let's hear it. If you use Untappd (an app I recommend if you're into craft beer), you can add both of us as friends - Jason here and Ranger here.