In the first part of our 2014 Aggie Baseball season preview, we take a look at the players that the Aggies lose from the 2013 season and all of the new arrivals on the 2014 roster.

It's almost here, y'all. We've had snow and ice in Texas and that can only mean one thing - okay, maybe two if you count the polar vortex as a thing - the impending arrival of Opening Day. We're now less than 2 weeks away from getting the 2014 season started at Olsen Field, and you can be sure that the cold and wet weather will be back in time for first pitch.

As we get you ready with everything you need to know about this upcoming season for Aggie Baseball, we're going to start off by taking a look at the players from last year's squad who have moved on as well as incoming players to this year's team from high school or junior college. You'll notice that there will be quite a few new names and faces on this 2014 team, but there are enough upperclassmen returning from last year and transfers from JUCO that I wouldn't call this a "young" Aggie team. Let's get to it.

All photos, except for the main article photo, are courtesy of @PuzzlesAndSocks. 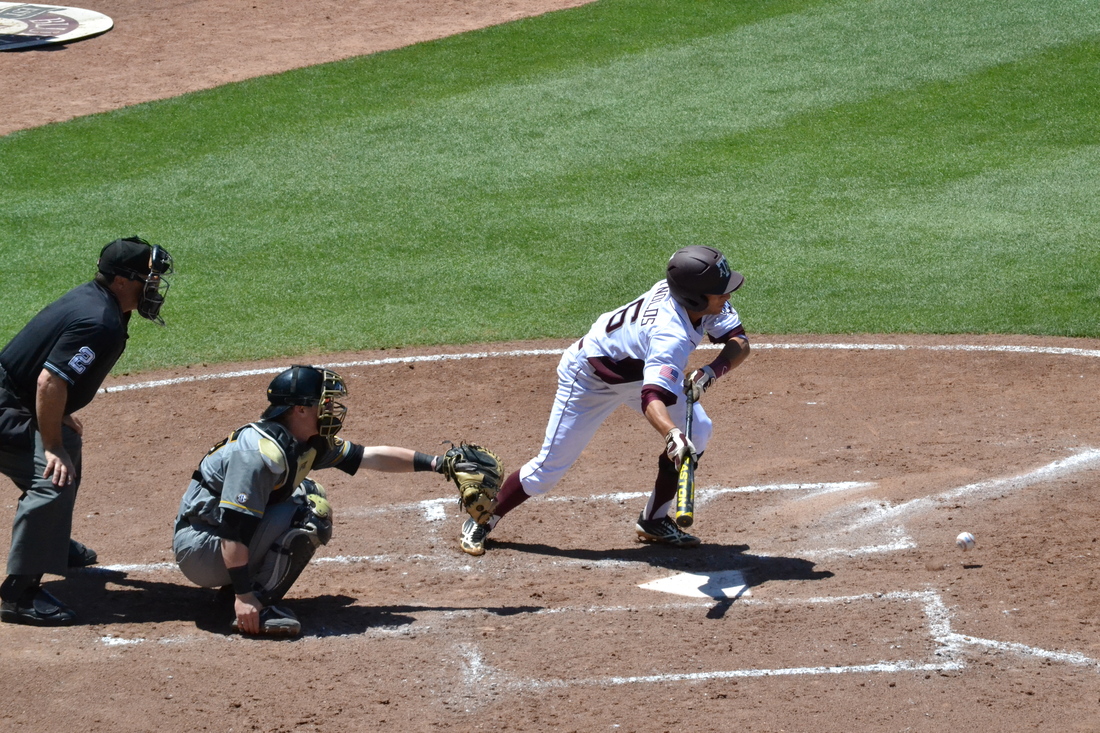 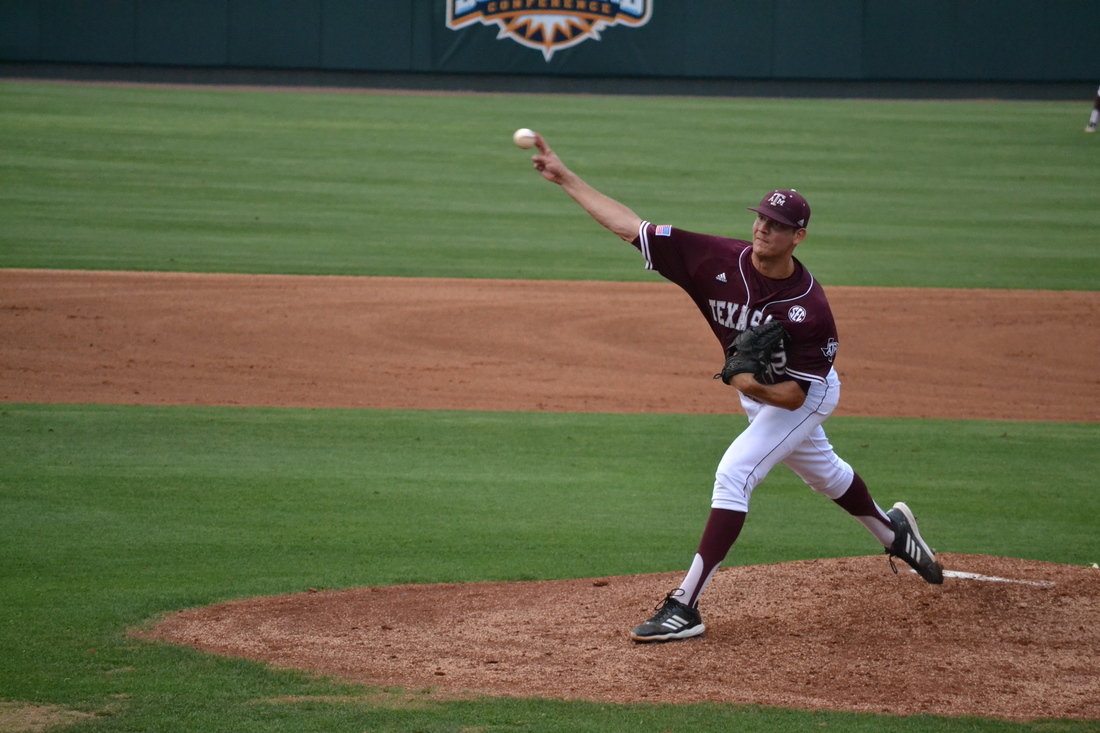 K-Mart made 21 appearances, including 7 starts, in 2013 and finished the season with a 3-4 record and41 strikeouts. He ended his A&M career with the 3rd most appearances (98) in school history. Martin was drafted by the Red Sox in the 9th round of the MLB Draft. He began his professional career with Boston's Short-Season A League team where he pitched 19 innings in 10 appearances and posted a record of 2-1 with 2 saves, 15 K, and an ERA of 0.47. He was moved to the Red Sox' A League team, where he had 9 appearances, threw 17 innings and also had a record 2-1 with 1 save, 15 K and a 2.12 ERA. 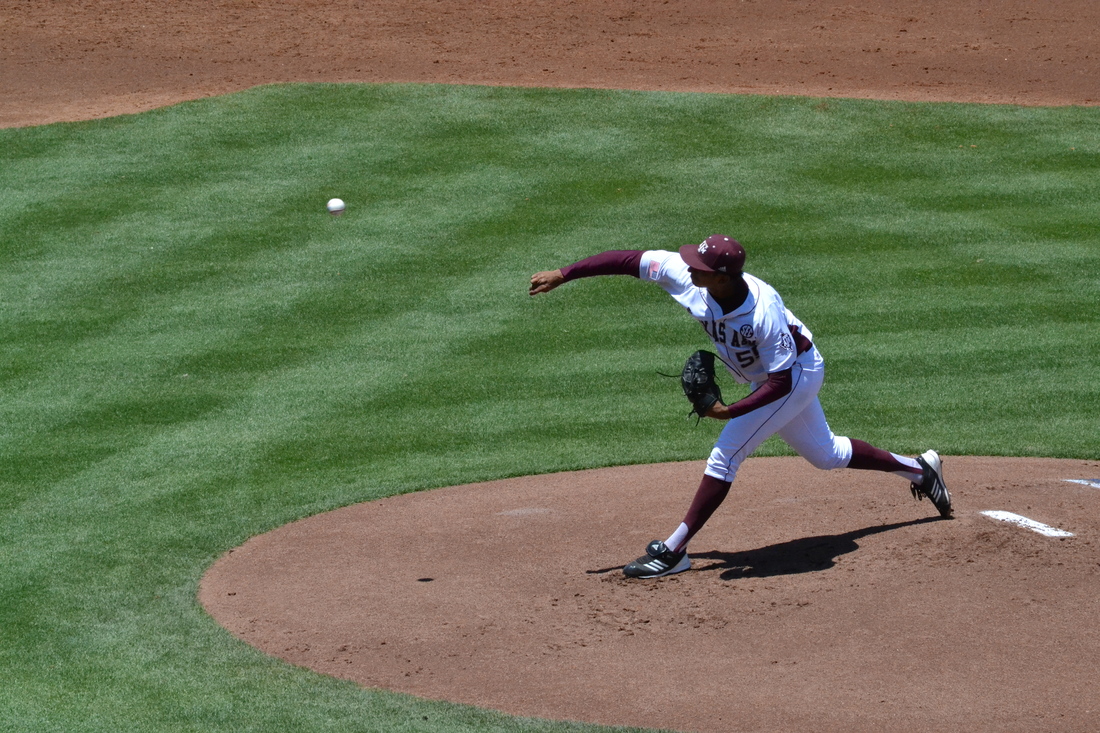 Charlie played in 43 games last season for A&M, including 38 starts, and finished the season with a .204 average and 11 RBI; he was also one of the better defensive players for the Aggies.

Other players from the 2013 roster who are no longer with the team include: Zach Brashear, Chance Bolcerek, Drew Featherston, Danny Holst, Greg Maisto, Cory Raley, Ryan Rand and Nathan Sorenson. Also worth noting, A&M recruit Casey Shane - a RHP from Burleson Centennial HS - was drafted in the 6th round by the Cleveland Indians and decided to forego college to head to MLB.

Banks was ranked as the 2nd best outfielder in the state of Texas by Perfect Game, was named Houston Player of the Year in 2013, was a Perfect Game All-American, and won the state championship with Tomball in 2013. Banks hit for a .531 average in his senior year with 9 HR, 39 RBI, and 42 runs. He is a guy who certainly has the potential to start on Opening Day - I wouldn't be surprised if he starts in RF - but even if not, he will definitely see meaningful playing time in 2014.

"Ryno" was ranked as the 2nd best SS in Texas by Perfect Game and was also 2nd Team All-State in 2013. He hit .410 with 7 2B, 2 HR, and an on-base percentage over .500 in his senior year. Birk was an infielder in high school, but it could be possible for Coach Childress to consider him as an option in the outfield as well. I would look for him to compete for the 2B spot and a potential OF spot, and he is another possible Opening Day starter.

Chafin was named 2nd-Team All-Greater Houston in 2013, and he is a guy that Coach Sealy compared to former A&M relief pitcher Estevan Uriegas. Chafin features a mid-to-upper 80's fastball and good but improvable breaking ball. He may be a nice bullpen contributor for the Aggies in 2014.

In leading his team to the second round of playoffs in 2013, Choruby hit for a .470 average and had 4 walk-off hits. His speed is also a big part of his game, something that will benefit him in his chances to earn playing time for the Aggies. Choruby played 2B and SS in high school, and he is someone that Coach Childress mentioned as having a very good fall for the Aggies. Choruby could be right in the mix with Birk and Blake Allemand for the starting position at 2B.

Ecker was ranked the 7th best RHP in Texas by Perfect Game and was also the San Antonio area Player of the Year in 2013. He features a fastball that sits in the low 90's and finished his senior year with an 8-2 record. Ecker will likely see time as a bullpen contributor in 2014, although he impressed Coach Childress in the fall and winter and is someone who could earn a shot at the midweek starter role.

Gideon was the 3rd ranked 3B in the state of Texas by Perfect Game, and was also named 2nd Team All-State in 2013. He is a 6'3, 225lb guy who can hit for power, something that the Aggies have not had enough of in the last few years. He isn't likely to be a starter right away, but certainly could compete for playing time this season. Also of note, Ronnie's dad, Ron, played for (and now works for) the Colorado Rockies; Ronnie was drafted in the 35th round by those very same Rockies, but Ronnie chose to come to A&M.

Hendrix is 6'3, 175, and is a guy with a loose arm and a good feel for pitching. His velocity is currently in the upper 80's and is something that he can improve upon. Hendrix was drafted in the 17th round by the Cleveland Indians, but he chose to come to Aggieland instead. He was another one of the freshmen who impressed Coach Childress in the fall and winter, so look for him to get some innings out of the bullpen in 2014.

Hinsley checks in at 6'2, 220, and is someone who I'm looking forward to seeing play for the Aggies in 2014. His stats from his last year in junior college are impressive - he hit for an average of .420, with a .688 slugging percentage and a .526 on-base percentage, smashed 9 HR and knocked in 44 runs. Hinsley played for the Brazos Valley Bombers last summer & took them to the league Championship; he also led the team with 6 HR, 55 RBI, and set a Bombers record for total bases. Look for Hinsley to be an Opening Day starter at one of the outfield spots, most likely LF.

Howard threw 74.2 innings in his last year of junior college and posted an 8-3 record with a 1.69 ERA (led his team), 65 K, 33 BB and a 1.17 WHIP. He was drafted in the 39th round of the MLB Draft by the Oakland A's, and he features a fastball in the upper 80's and a good changeup. Howard will likely be another guy who gets a shot at the midweek starter role and could challenge for a weekend spot depending on how the season plays out.

McLendon hit for an average of .370, a slugging percentage of .500 and a .439 on-base percentage with 15 2B and 31 RBI. McLendon also played for the Bombers over the summer where he hit .276 with 11 2B and 26 RBI. While his numbers aren't quite on the same level as Bombers and now Aggie teammate G.R. Hinsley, McLendon does a good job of getting on base and can compete for playing time in 2014.

Along with G.R. Hinsley, Nottebrok is the other guy that I am very excited to see play for the Maroon & White in 2014. Nottebrok played SS at Temple Junior College, but Coach Childress plans to play him at 3B for A&M, where he will compete with Hunter Melton for the starting spot. I would not be surprised in the least if Nottebrok is your Opening Day starter at 3rd. In his last year at Temple, Nottebrok hit for a .363 average, slugged .516 and had an on-base percentage of .437 to go along with 5 HR and 43 RBI.

Stubblefield was ranked the 6th best LHP in Texas by Perfect Game, and he earned MVP 1st Team All-District last season. He is 6'5, 220, and also was the starting QB for Lufkin's football team. As you likely assumed, Tyler is current Aggie pitcher Gandy Stubblefield's younger brother (he's actually the 2nd of 3 Stubblefield brothers). Tyler's fastball is in the upper 80's right now, and the A&M coaches expect he will improve as he focuses solely on baseball. I expect him to also challenge for the midweek starter role, although he could see time out of the bullpen to start the season.

As I mentioned, there will be quite a few new players who will play a significant part in the 2014 season for the Aggies. Nottebrok, Hinsley, Birk and Banks all have a chance to start on Opening Day, and any number of the new pitchers could see action from the bullpen. You'll also notice that the Aggies have quite a few options at the middle infield positions - with returning players Taylor and Allemand and a number of freshmen and JUCO transfers in the mix. The only position in the lineup that I feel 100% confident in picking an Opening Day starter at is 1st, where junior Cole Lankford established himself last year and through the offseason.

The next part of our Season preview will focus more on the returning players who will be key to the Aggies' success in 2014, as well as a look at the season's schedule and my best guess at how the season might play out. Stay tuned for that next week as we inch ever closer to Opening Day!